iPhones are hard to use

I once wrote a user manual for a handheld engine-diagnostics module for Daewoo cars. I know “hard to use” when I see it. iPhones are hard to use.

Very advanced, very tuned-in people learn about, and learn how to use, new Apple features by watching them being demonstrated onstage during Apple keynote events.

Then there’s everybody else.

Don Norman told us several times several years ago (Ⅰ – Ⅱ – Ⅲ) that iPhones hide their functions. Apple never admits it makes mistakes. The next time you hear Tim Cook or somebody recounting a tale of a guy who crashed his car and was able to call a paramedic using his Apple Watch, think instead of millions of people who cannot use their phones for basic or truly serious needs.

With an alleged one billion “iOS devices” in use over a decade, Apple’s mistakes are the butterfly effect writ large. Anything that people could get wrong, or simply not know about, will be gotten wrong or will go unknown by tens of millions.

In the iPhone context there are things you should reasonably expect are possible without any reflection (my iPhone has a calculator). There are things that should have been obvious in retrospect (my iPhone can give me directions).

Yet sometimes people just need to learn the basics. There are people who Google “Facebook” to go to Facebook. (They don’t know what a browser address bar is despite its having stared them in the face for a decade, and also don’t know about bookmarks.) There are people who know what address bars are but not search bars, so they go to google.com for every search. (Cf. the browser Find command.)

You shouldn’t be afraid of your phone. You shouldn’t feel inhibited from just trying things out. But we are. Me, too.

And they’re both hidden. 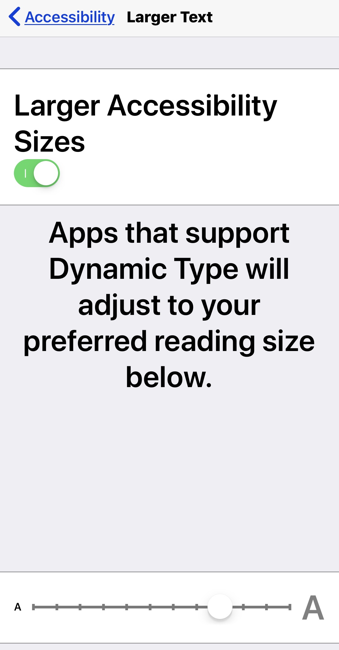 If Apple actually cared about accessibility (it does not), on the setup screen for every iPhone, iPad, and iPod Touch would be a step you could not skip wherein you have to choose your preferred text size. And it would state explicitly that if you have to pick a size that seems a bit too big or one that’s a bit too small, go bigger.

This function relates to blindness less than you might expect. Blind people don’t all need things blown up huge. My blind friend mentioned above needs normal-sized type. This issue relates to hundreds of millions of middle-aged people with presbyopia, the aging-related inability to focus that got its name three centuries ago. (It’s inability to focus. Nothing you can do will bring the object into focus without moving it or adding a lens.)

If – further – Apple were committed to diversity (it is not), middle-aged persons would be involved in product and software development and would be present to kick up a fuss when they themselves cannot read the products they created. (Or their complaints would actually be heeded.)

Even just yesterday I saw the hundredth or thousandth person instantly and reflexively and uncomprehendingly dismiss the alert box that jumps up whenever you aren’t near a wifi signal you’ve logged into while there are other networks to choose from. (I stood next to a friend once and took the phone out of his hand to turn this function off. I did not get permission but I did it anyway.)

If anything in the Apple “ecosystem” reeks of the kind of Windows autism that repels Macintosh supremacists, it is every iPhone’s insistence on interrupting you just because you passed by a wifi router.

Try this experiment. Take any kind of ride through an urban setting passing coffeeshops or dense residences like high-rises and condos. (Or just businesses. Everybody has wireless Internet.) Hold your phone and pretend to do something with it. You’ll be interrupted endlessly.

I say again: Everyone dismisses this dialogue instantly, with no knowledge of what they’re doing or what it was doing, and with no memory of having done it. It’s a special kind of annoyance akin to dissociative anæsthesia, in that you may not know what just happened but you sure as shit don’t want to relive it. Yet you will: It’s on by default. (And it’s too maddening for a screenshot here.)

Security (of the person)

Seriously advanced security features like two-factor authentication (which kind? Apple offers two) are exactly the sort of thing only experts who don’t need them will ever set up.

Observing what are dismissively called “normal people” (or “users”) for more than a decade, the one thing iPhone owners are proud they know how to do is force-quit apps. They also know how to set a ringtone and choose atrocious wallpaper.

And that’s it. But they aren’t to blame.

HONOURABLE MENTION: If somebody told you your Home button was going to wear out, hence you turned on AssistiveTouch, you were lied to. (That lie will have been expressed in Chinese. I have never seen a disabled person with AssistiveTouch turned on. Only people with broken screens and ethnic Chinese use it, in my direct observation and according to popular lore.)

If experts who get paid to cover Apple do not know a feature exists, it does not

The most advanced Apple experts – one, actually – had no idea the following was possible. And, as with so many features, the right way to demonstrate them is via video, not a written explanation.

You can select lots and lots of photos.

Now you see with Adobe Lightroom has a select-all checkbox.

But Apple does know, at a preconscious level, that selecting many or all pictures is an issue: In the Recently Deleted album, whose location changed in iOS 12 such that I couldn’t find it, you can Delete All in two presses.

(Fun fact: You can drag and drop photos in some albums, which I discovered by getting the sequence wrong that I just listed above.)

Siri is hard to use

Like you, I can’t get Siri to set something up correctly on the first go more than three-quarters of the time. You shouldn’t have to talk a certain way to a virtual assistant. After this many years, he should understand you; he does not. (Siri is an Australian male.)

Did you know there’s a user manual?

In the iBooks (or is it Books?) Store you can download an iPhone User Guide for each major software version. There are usually iPad and sometimes iPod Touch user guides, too.

Once you do that (you won’t), you’ll find that almost nothing I have described here is covered. It does mention the ability to announce who’s calling you, but buries text size in the accessibility gulag, recapitulating the entire problem.

I sat and stewed about this posting for months. If nothing else, I need to keep it from becoming a script for a YouTube video about “hidden features” in iOS.

iPhones are hard to use.