The friends who drove a bus behind the Iron Curtain

In the summer of 1968, a group of friends adapted a double-decker bus and took it on a journey to Eastern Europe. Sponsored by two Scotch whisky-makers, they encountered Soviet tanks, a Romanian beer shortage and a perilous Yugoslavian mountain pass.

The bus was an old Reading Transport Corporation AEC Regent MkII - a model that now has its own Wikipedia page and a loyal following. Long past its corporate usefulness, the bus was lined up with an assortment of discarded relics outside a garage in Spittalfield, a small town north of Perth in Scotland.

Ian Jack and his friend Dave Stickland had vague plans for some sort of summer road trip. Driving past the garage one May day in 1968 the students spotted the buses and, on a whim, stopped to price up a single-decker. Single-deckers turned out to be an impossibly expensive £400. But, just as they were leaving, the garage foreman called them back and offered them a less in-demand double-decker for half that.

Buying such a large vehicle was "a ridiculous idea", so they declined and left, Ian says. "But then we got back to the university and the word got around and all of a sudden people wanted to give me some money to buy it."

The trip was on. The Southall-built gem of British engineering was about to meet continental Europe.

Seats were taken out to make way for mattresses donated by their university, St Andrews. Pieces of carpet were procured, and Wendy Scott, one of a dozen or so travelling companions, made curtains for the upper deck - both for the windows and to string across the sleeping quarters, to give the five female students on board some privacy. Sleeping arrangements were something the local press was particularly interested in.

They installed a little cooker and rigged up a makeshift shower using water heated by the engine's cooling system piped along a sunken walkway to the back of the bus.

There was no loo, just a stockpile of toilet roll and an acceptance that any call of nature would have to be answered al fresco.

Sometimes they'd sleep outside if the weather allowed. "You'd wake up in the morning at the top of the pass, climb up, and you'd look down and there would be Ian, playing the pipes - the bagpipes," says Wendy.

"Absolutely wonderful. What else do you want in this life?"

It isn't easy to pin down exactly how many of them there were to start with. Enough for an eightsome reel folk dance on the ferry from Dover to Dunkirk, at least. Wendy remembers 13, Ian thinks about 15.

But it hardly matters since they had a habit of picking people up along the way, so their numbers constantly fluctuated.

An American GI, on holiday in Munich, was so distracted by the bus he cycled into it - and stayed. A couple of Austrians joined them in Vienna and didn't leave for a month. One - Klem - turned out to be a chef and skilful in the "kitchen" at the back of the bus, with its tiny gas cooker.

"We had mussels and we had chickens and we had - oh - we had wonderful meals," says Wendy, looking wistful. They picked the mussels straight from the sea. The chickens, bought live from a market, ran wild on the bus.

Two days before they reached Rome, Klem bought some snails as a present for his mother and housed them in a big bucket. The next morning they were everywhere.

In Cluj, in northern Romania, they were flagged down by a British commercial traveller who turned out to be good at sourcing beer during what was then a national shortage.

When the same problem presented itself further down the country, in Bucharest, they were wise to it. "By that time we knew that the only way to buy beer here was to wait at the gates of the brewery until a truck came out, then follow it to its destination and produce a little hard currency," says Ian.

The group had persuaded the Scotch whisky company Teachers to part with £79 - about £1,400 in today's money - in return for an advert on the side of the bus and a promise to hand out promotional leaflets written in English, French and German. The now defunct whisky-maker Ainslie's also gave them £10.

"People thought we were nuts."

Some of the traffic hold-ups were self inflicted, however.

In Split they took out a low-hanging overhead power cable, shorting the local transport system. "There was a bright flash and a bang and I noticed that the trolley-buses which had been climbing up the road to the left had ground to a halt," says Ian. "It seemed best not to stop just then."

Driving in Istanbul was also a "nightmare" of narrow streets clustered with people, wheelbarrows, donkey carts and overhanging balconies. One street got narrower and narrower until they could go no further.

"The balconies were right up against the upper deck of the bus," Ian remembers. "We had to back out - uphill - causing huge traffic perturbations."

By this time the bus was already quite battered, having lost a war of attrition against the low-hanging branches and tunnels of a Europe not yet accustomed to vehicles the height of a double-decker.

The bus had stuck fast under a bridge on the road to Nuremberg, having cleared it in the opposite direction by little more than a centimetre. They'd deflated the tyres, backed out and tried again in the middle of the road, with someone walking in front, as "the bus eased its way through", says Ian. He now drives a more manoeuvrable Peugeot saloon around his home city of Cambridge.

Then, one August day half way through their trip, Ian and the bus came very close to falling off the side of a mountain.

The road was far too narrow. Rock protruding from one side forced him so far out the bus wheels skimmed the cliff edge.

"Locals stood in front of the bus trying to persuade us not to proceed," remembers Ian's friend Margaret Hills, another member of this band of St Andrews University students. "The track was unmade, rubble limestone, narrow, with overhangs on one side and a precipitous drop on the other."

But Ian remembers something a little less urgent and clearly it had seemed safe to proceed. Yes, there was some arm-waving, he says. "But this wasn't unusual so we thought nothing of it."

Wendy got off and watched as Ian inched forwards.

"It was so scary," she says. She pauses and says it again, because once clearly doesn't do it justice.

"It was SO scary. We were frightened it would go over the side."

This won't surprise anyone familiar with the Cakor Pass, a perilous mountain road through Kosovo, then part of Yugoslavia. But Ian had been lulled into a false sense of security by the road's name, E27, which sounded like a major road.

It soon deteriorated into a gravel track with hairpin bends around a steep gorge.

"Some prayers were said even by the atheistic members of the company," Ian says. "If I had known any of this beforehand, there is no way I would have dared to attempt E27."

Survival achieved and driving done for the day, they would park up anywhere and everywhere: beaches, lay-bys and, on one occasion, a forest outside Munich that turned out to be an army rifle range. A bridge near the Danube in Vienna seemed nice until the local drug addicts started to congregate.

They visited so many places that Wendy - now a seasoned traveller - can't remember them all. Pondering clear evidence they went to a concert in Vienna's famous St Stephen's Cathedral, she says she has "no recollection of it at all". Her diary says they went, "so I've definitely been there", she says, not sounding particularly convinced.

Ian - the journey's mastermind - had ridden some of the route the previous year on a motorbike and sidecar with Dave.

He knew all the best places to go, says Margaret, who now lives in Sandhurst in Berkshire. "We would be roasting to death in our metal box when we pulled up at a pier on the most beautiful lake where we could jump in and cool off," she says.

"I remember being driven through a city in similar stifling heat and being dropped off at a swimming pool which was the coldest I had ever experienced. How on earth did he know that was there? No wi-fi or Google then."

Ian will accept no praise, admitting only to having had "some reasonable maps".

They had to be careful with their hard currency, though. In the late 60s, controls aimed at keeping the economy stable meant the maximum sum of money British travellers could take out of the country was £50.

Western jeans and biros turned out to be a good alternative to cash and the friends discovered a hospital in Kavala in Greece which paid for blood donations. At £5 and 10 shillings for half a pint - about a tenth of their allowance - it seemed "an awful lot of money", says Wendy.

Also keen not to spend more than they had to, they came up with a plan to avoid a tax on passengers travelling into Yugoslavia. After the Greek border post, they would get off the bus and walk, pretending to be hitchhikers, only getting back on once past the Yugoslav control point.

"What we did not realise was that there were several kilometres between the two posts, so the hitchhikers got a very rough deal and arrived back at the bus sweaty and in an understandably very bad mood," Ian says.

The border crossings were not always easy.

The group was usually questioned and often searched. In Bulgaria, officials suspected they were transporting contraband. "I was made to drive over an inspection pit which gave me a useful - and the only - opportunity to check out the underside of the bus while the border guards looked for drugs or whatever," Ian remembers.

Crossing the Iron Curtain into Hungary was difficult and slow, but for different reasons that only became apparent later, he says. Seeing large numbers of Russian tank transporters they were "very aware" something was brewing, Wendy says. But they didn't know what and they didn't stay long.

The friends had just avoided Operation Danube, a Soviet military clampdown on the Prague Spring - a four-month attempt by Czechs to take back some control of their country from Moscow.

By the time the tanks were preparing to cross the border Ian and the gang were on their way home, crossing the Channel on the Dunkirk-to-Dover ferry.

Wendy was soon back in Dundee with sixpence in her pocket and the first 7,500 miles of what was to become a lifetime of travelling.

Ian's relationship with the bus lasted a little longer. In early September 1968 he drove it one last time, back over to Aalst in Belgium to a man who'd wanted to buy it when they'd first passed through the city two months previously. It ended up as the winning float in the following year's Aalst Carnival.

And, if Cliff Richard fans find this whole story reminiscent of his 1963 film Summer Holiday - with the bus, the group of friends, the singing, the dancing and the occasional perilous Yugoslavian mountain track - Ian doesn't.

The film entirely passed him by and he still hasn't seen it. 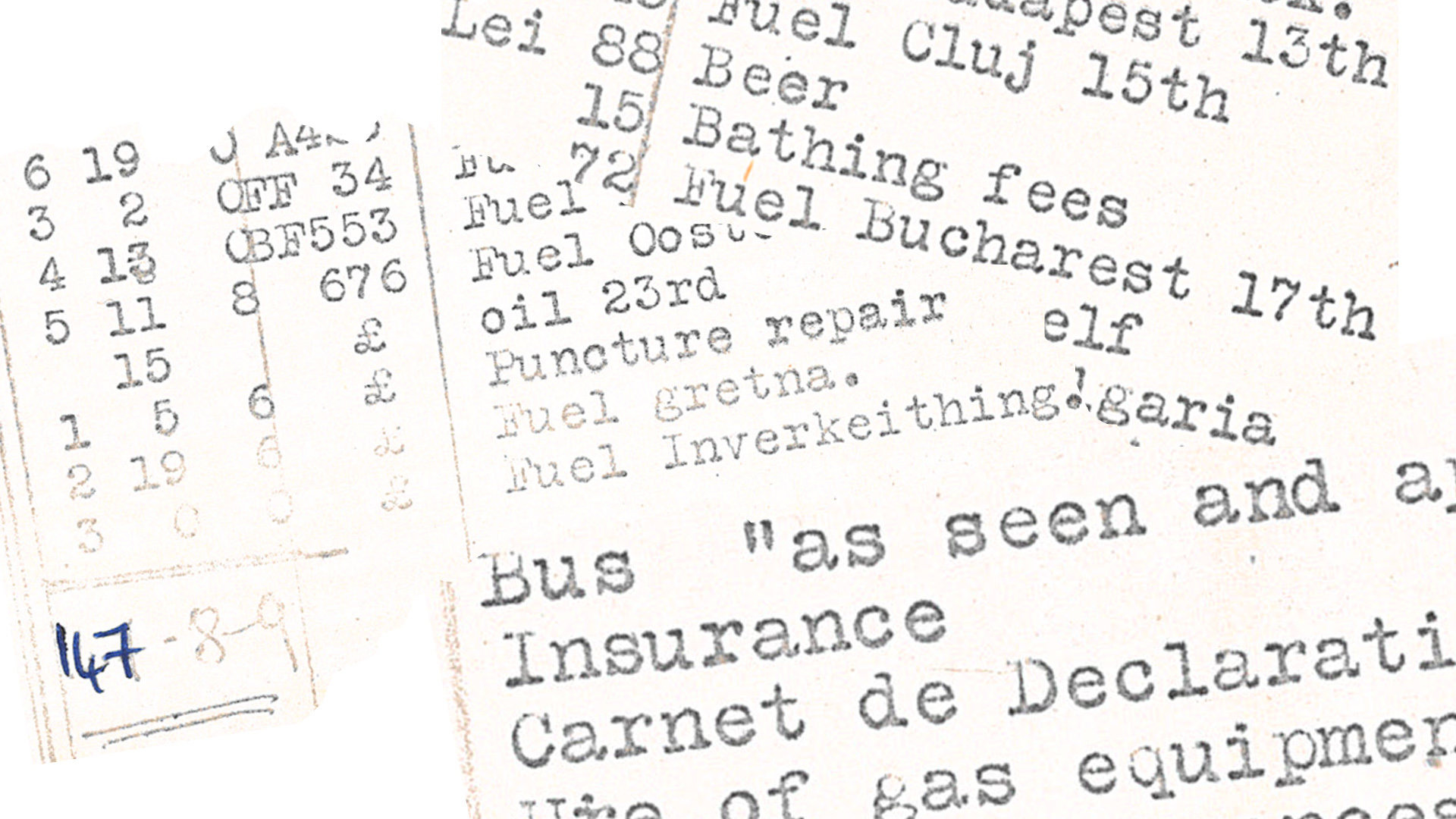 The trip in numbers

Some of Ian Jack's recollections have been taken from a talk given by him in 2017.