In my last post, I wrote about my adventure of requesting metadata for both phone calls and emails from the City of Chicago Office of the Mayor. The work there - and its associated frustration - sent me down a path of sending requests throughout the US to both learn whether these sorts of problems are systemic (megaspoiler: they are) and to also start mapping communication across the United States. Since then, I’ve submitted over a hundred requests for email metadata across the United States – at least two per state.

The first large batch of requests for email metadata were sent to the largest cities of fourteen arbitrary states in a trial run of sorts. In the end of that batch, only two cities were willing to continue with the request - Houston and Seattle. Houston complied surprisingly quickly and snail mailed the metadata for 6m emails.

Seattle on the other hand...

On April 2, 2017 I sent this fairly boilerplate request to Seattle's IT department:

Technically this request can done with a single line powershell command. At a policy level, though, it usually gets a lot of pushback. Seattle's first response included a bit of gobsmackery that I’ve almost become used to:

Of course, I still want the records, so - 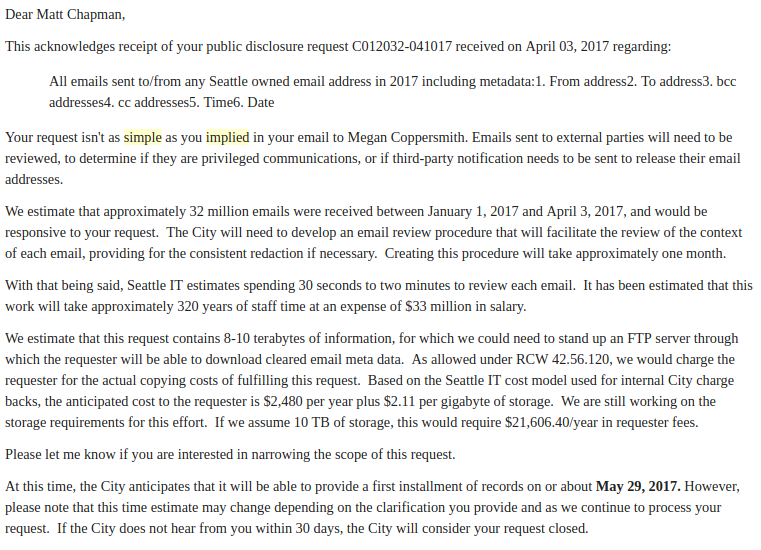 A week later, I received this glorious response. Each paragraph is interesting in itself, so let’s break most of it down piece by piece.

Notice the change of language from the original wording. Their rewording completely changes the scope of the request so that it's not just for metadata, but also the emails contents. No idea why they did that.

Normally, a flustered public records officer would just reject a giant request for being for “unduly burdensome”… but this sort of estimate is practically unheard of. So much so that other FOIA nerds have told me that this is the second biggest request they've ever seen. The passive aggression is thick. Needless to say, it's not something I'm willing to pay for!

The estimate of 30s per metadata entry is also a bit suspect. Especially with the use of Excel, which would be useful for removing duplicates, etc.

Heh. Any sysadmin can tell you that The costs of storage doesn’t exactly come from the storage medium itself; administration costs, supporting hardware, etc, are the bulk of the costs. But come on, let’s be realistic here. There’s very little room for good faith in their cost estimates – especially since the last time a single gigabyte cost that much was between 2002 and 2004.

That said – some other interesting things going on here:

Oddly, they don't actually close out the request and instead ask whether I wanted to continue or not. I responded to their amazing email by asking how many records I'd receive on May 29th, but never received an answer back.

Reversal of the Original Cost Estimate

On June 5, they sent a new response admitting that their initial fee estimation was wrong, and asked for $1.25 for two days’ (out of three months) of records:

Because they're asking for a single check for $1.25 for just two days’ worth of metadata – and wouldn’t send anything until that first check came in, my interpretation is that they’re taking a page from /r/maliciouscompliance and just making this request as painful as possible just for the simple sake of making it difficult. So in response, I preemptively sent them fourteen separate checks. The first thirteen checks were all around ~$1.25. That seemed to work, since they never asked for a single payment afterwards.

From there, my inbox went mostly silent for two months, and I mostly forgot about the request, though they eventually cashed all of the checks and made me an account for their public records portal.

Fast forward to August 22, when I randomly added that email account back to my phone. Unexpectedly, it turned out they actually finished the request! And without a bill for millions of dollars! Sure enough, their public records request portal had about 400 files available to download, which all in all contained metadata for about 32 million emails. Neat!

Problem though... they accidentally included the first 256 characters of all 32 million emails.

Here are some things I found in the emails:

In other words... they just leaked to me a massive dataset filled with intimately private information. In the process, they very likely broke many laws, including the Privacy Act of 1974 and many of WA's own public records laws. Frankly, I'm still at a loss of words.

It’s hard to say how any of this happened exactly, but odds are that a combination of request’s rewording and the original public records officer going on vacation led to a communication breakdown. I don’t want to dwell on the mistake itself, so I’ll stop it at that.

Side note to Seattle's IT department - clean up your disks. You shouldn't have that many disks at 100%!

I responded as passively as possible in the hopes that they’d catch their mistake on their own:

Disregarding the fact that they used a very common tactic of denying information on the basis that its disclosure would require the creation of new records… they didn’t get the point. I explained what information they leaked, and made it very clear how I was going to escalate this:

Not too long after that, after contacting some folks on Seattle’s Open Data , I found my way onto a conference phone call with both Seattle’s Chief Technology officer and their Chief Privacy Officer and we discussed what happened, and what should happen with the records. They thanked me for bringing the situation to their attention and all that, but the mood of the call was as if both parties had a knife behind their back. Somewhere towards the end of the call, I asked them if it was okay to keep the emails. Why not at least ask, right?

Funny enough, in the middle of that question, my internet died and interrupted the call for the first time in the six months I lived in that house. Odd. It came back ten minutes later, and I dialed back into the conference line, but the mood of the call pretty much 180’d. They told me:

This isn't something I'm even remotely cool with, so we ended the call a couple minutes later, and agreed to have our lawyers speak going forward.

After that call, I asked my lawyer to reach out to their lawyer and was pretty much told that Seattle was approaching the problem as if they were pursuing Computer Fraud And Abuse (CFAA) charges. For information that they sent. Jiminey Cricket..

So, I deleted the files.

Most of what happened next over a month or so was mostly between their lawyer and mine, so there’s not really that much for me to say. Early on I suggested that I write an affidavit that explains what happened, how I deleted the files, and I validated that the files were deleted. They mostly agreed, but still wanted to throw some silly assurance things my way – including asking me to run a bash script to overwrite any unused disk space with random bits. I eventually ran zerofree and fstrim instead, and they accepted the affidavit. No more legal threats from there.

About a week after the phone call, a Seattle city employee contacted Seattle’s KIRO7 about the incident. In KIRO7's investigation, they learned that, Seattle hadn’t sent any disclosure of the leak - something required by WA’s public records request law. Only after their investigation did Seattle actually notify its employees about the emails leak. Link to their story (video inside). 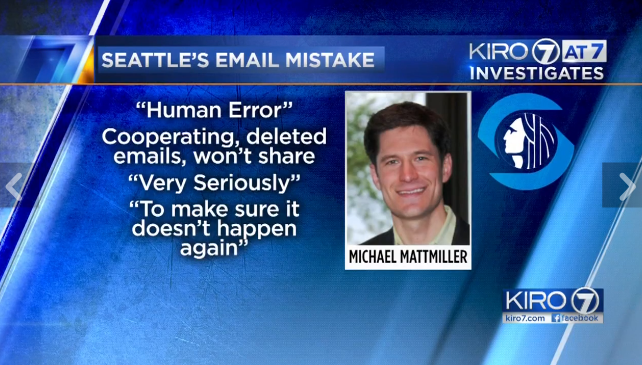 A week later, another article was published by Seattle’s Crosscut which goes into a lot of detail, including some history of Seattle's IT department. This line towards the bottom still makes me laugh a little:

On January 19th, Seattle's CTO, Michael Mattmiller gave his resignation. Whether his resignation is related to the email leak is hard to say, but I just think the timing makes it worth mentioning.

Starting January 26th, Seattle started sending installments of the email metadata I requested. So far they've sent 27 million emails. As of the writing of this post, there are only two departments who haven’t provided their email metadata: the Police Department and Human Services.

Some things about the dataset:

In any case, it's still somewhat workable, so I've been working on a proof of concept for its use in the greater context of public records laws. Not ready to talk much about it yet, so here's here's is a gephi graph of one day's worth of metadata. Its layout is Yifan Hu and filtered with a k-core minimum of 5 and a minimum degree of 5: 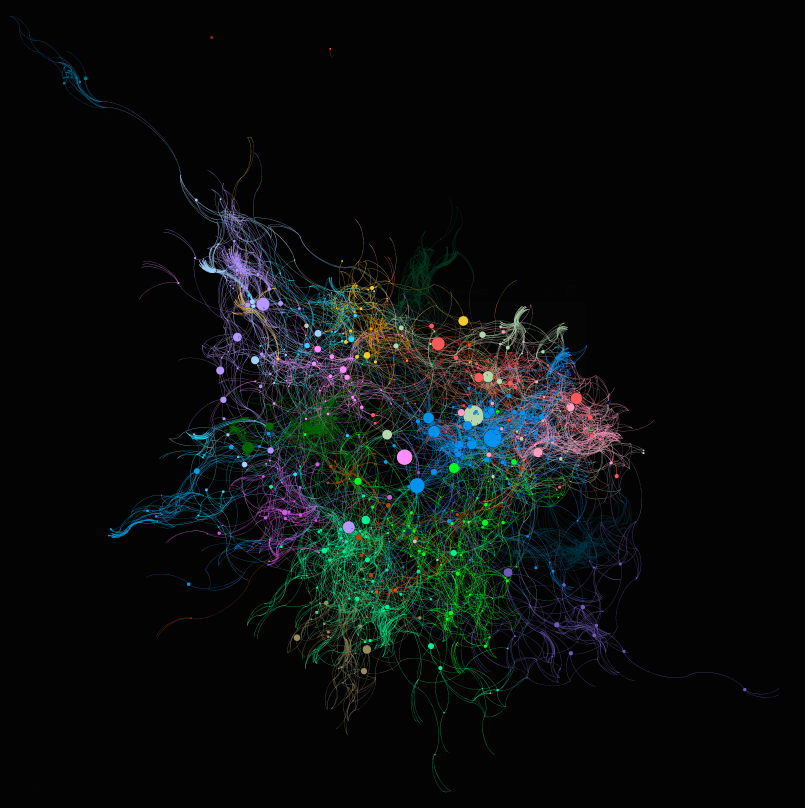 Please reach out to me if you'd like to help model these networks.

This last section might not be related, but the timing is interesting, so I feel it’s worth mentioning.

On February 23 - between the first installment of email metadata and the second - WA’s legislature attempted to pass SB6617, a bill which removes requirements for disclosure of many of their records – including email exchanges - from WA’s public records laws. What’s particularly interesting about this events of this bill is that it took less than 24 hours from the time it was read for the first time to the time that it passed at both the House and Senate and sent to the Governor’s office.

Seattle Times wrote a good article about it.

Thankfully, after the WA governor’s office received over 6,300 phone calls, 100 letters, and over 12,500 emails, the governor ended up vetoing the bill. Neat.

It's hard to say if that caused any sort of delay, but after a month and a half of waiting:

And got this response:

A month later, they started sending the rest.

That said, this is just one city of many which have given me email metadata. As more of it comes through, I’ll be able to map out more and more, but the difficulty in requesting those records continues to get in the way.

Once I get some of these bigger stories out of the way, I’ll start writing fewer stories and write more about public records requesting fundamentals – particularly for digital records.

Next post will be about my ongoing suit against the White House OMB for email metadata from January 2017. This past Wednesday was the first court date - where the defendent's counsel never showed up.