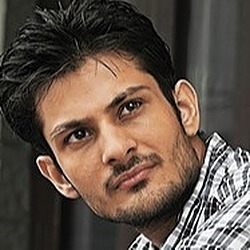 The internet has been buzzing since Elon Musk announced that Tesla is coming to India next year. This is big news and not just for the people who are waiting to get their hands on a luxury electric car like Tesla but also for the entire electric vehicles (EV) industry in the country.

Tesla is the world’s most valuable car company with a market cap of over $382 billion (Rs 28 lakh crore). It is worth more than Fiat Chrysler, Ford, Ferrari, GM, BWM, Honda, and Volkswagen combined.

It has a presence all over the world including United States, China, Germany, Netherlands, Canada, Mexico, pretty much everywhere in Europe, Jordan, the UAE, Taiwan, Japan, South Korea, Australia, and New Zealand.

But what has kept Tesla away from India for so long?

I mean India is one of the biggest markets for almost every industry. It is the country where more than 17% of the world’s population lives, is home to 3.5% of the world’s wealth – that’s $12.6 trillion (Rs 935 trillion) and has the third-highest number of billionaires including Asia’s wealthiest man Mukesh Ambani.

Well, there are a couple of very good reasons and let’s take a look at each of them one by one.

First, let’s take a look at how much does a Tesla cost and is it even affordable for Indians?

The cheapest Tesla on the market right now, the Model 3, without any of the bells and whistles that Tesla is known for, costs $37,990 (Rs 28 lakh).

For a country, like India, where the average income of a regular person is Rs 1.76 lakh ($2,338) per annum, the cost of buying a Tesla is higher than in most countries.

How High? Well, if you ignore expenses like rent, food, their phone bill, and transportation, and the insane import tax, it would take more than 16 years for an average Indian to save up enough to buy a Tesla.

And it’s a lot when you compare with countries like the US, where the average income is a little bit more than $65,000 a year (Rs 48 lakh). With that kind of Gross Domestic Product (GDP) per capita, an average American, in our hypothetical expense-free world, would be able to afford a Tesla in just seven months.

But, the buying capacity of India’s is not the only issue.

There are also countries like China and Jordan, where it would take an average person to buy a Tesla in 4 years and 9 years respectively. While that’s still a far cry from the 16 years in India, it’s still a lot of time compared to the US.

So, why is it that Tesla sells there but not in India?

Well, the answer lies in these countries’ wealth distribution. 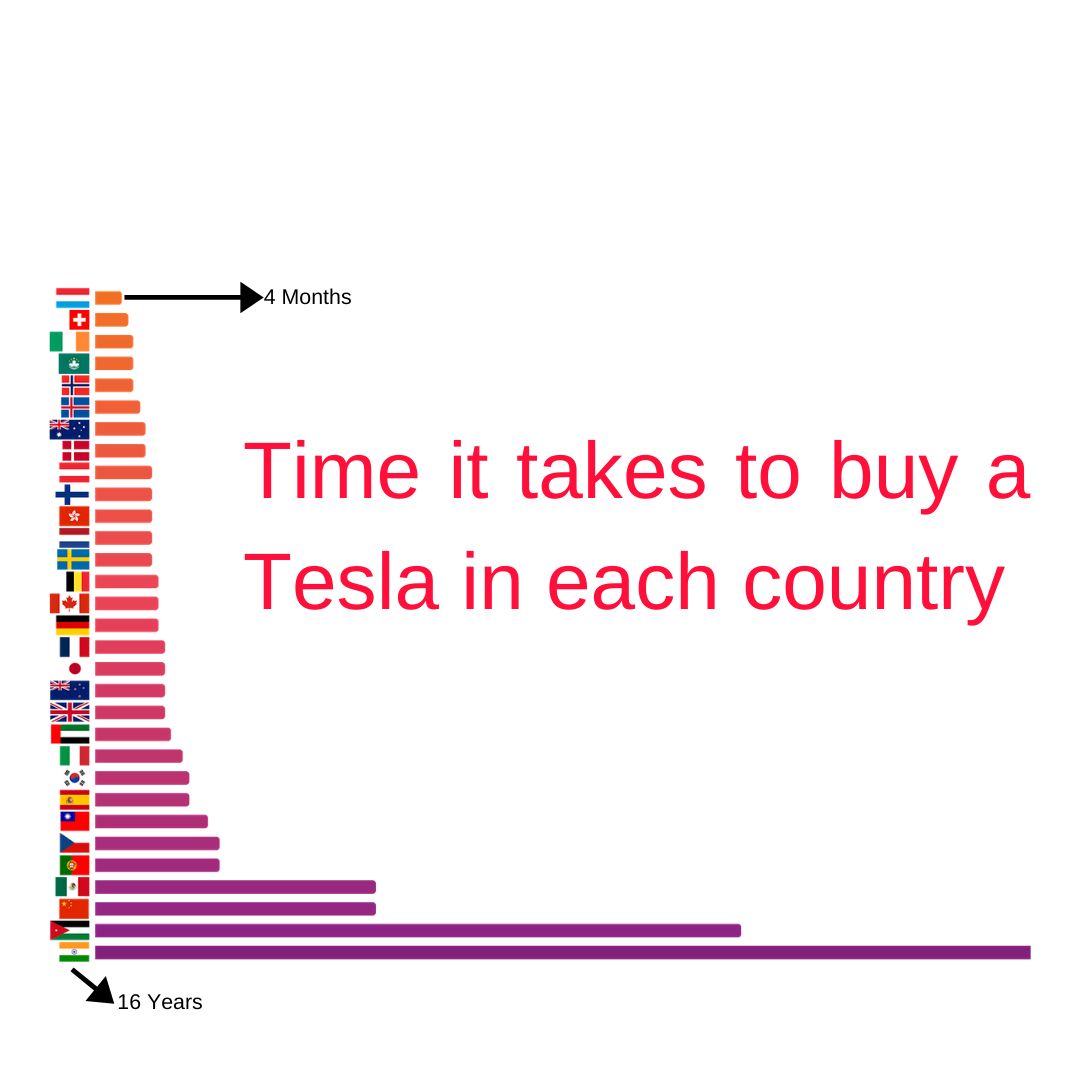 In the country of Jordan, there’s only 1 Tesla store, and it’s located in the country’s capital, which is where a large majority of the country’s wealthiest people live. It’s also been referred to as the Silicon Valley of the Middle East, as it’s one of the best cities in that part of the world to launch a tech startup in.

Another example is China. While it takes an average Chinese person 4 years to buy a Tesla, it only takes 9 months for people living in Hong Kong and merely 6 months for the people in Macao. Tesla has strategically placed its stores, service centres and charging stations in these wealth pockets of these countries, which makes it worthwhile for Tesla to operate in these countries.

Now coming back to India, where are the wealth pockets of India located, and can the people who live in them afford Teslas? Let’s find out.

Most of the wealth pockets in India are located in and around metro cities like Mumbai, Bengaluru, Delhi and Hyderabad and they have a GDP per capita of $3,734 (2.5 lakh rupees) as of 2016. While it’s significantly greater than the $2,338 (Rs 1.76 lakh), it is still less than the per capita income of the poorest country where Tesla operates in, which is Jordan.

However, considering some of the Indian cities have more population than Jordan, it would still make sense for Tesla to operate in India as it provides a better opportunity to scale and grow.

This means that something other than money might also be a factor. So, let’s take a look at what these other factors could be.

As we know, all Tesla cars now come with Autopilot pre-installed. This is a feature suite designed by Tesla specifically for their vehicles and includes advanced driver-assistance features like lane centring, traffic-aware cruise control, self-parking, automatic lane changes, semi-autonomous navigation on limited-access freeways, and the ability to summon your Tesla from a garage or parking spot.

For anyone who has been on Indian roads, you know that these features don’t make any sense in a country where roads are plastered with potholes and speed breakers which kills hundreds of people in accidents every year. Most of the times, the roads are too crowded with people, vehicles or even animals, leaving no room for auto-pilot to navigate. And unlike most developed countries, even if there are lanes on the roads, people usually end up ignoring them.

This means that the autopilot feature which has been designed for the convenience of the customers might actually end up causing more harm than good if it is allowed to operate on Indian roads. This also brings us to the question of the legality of autonomous cars in India. The Indian government doesn’t allow self-driving cars in India and for good reasons from what we know about Indian roads.

This means that Tesla will have not only put up the money for manufacturing cars and building factories but also build a strong network of charging stations to make their cars usable for their customers.

While that is exactly what Tesla did in the US, Elon Musk has said in his previous tweets that he wants to create a network of charging stations in India as well.

However, this might a little for difficult for Tesla to do in India considering Indian policies do not really allow them to do that at the moment. Take the example of India’s insane import tax. For cars that cost more than $40,000 (Rs 30 lakh), import tax is 100% and 60% if the car costs less than $40,000 (Rs 30 lakh). No matter the case, that’s a significant price to pay.

But how does this stop Tesla from setting up in India?

Well, Tesla usually funds the construction of its factories with the money that it makes from Tesla sales in the country that the factory is built in. The issue here is that Tesla can’t sell its cars in India considering the steep import tax. No sales mean no money and that means no factory.

This is what we think.

Firstly, we are definitely going to need some policy reform.  What if the Indian government were to make an expectation? For example, they could temporarily waive these taxes on a case-by-case basis for EV manufacturers who are willing to commit to building EV factories and charging stations in India.

This would be a win-win for India and foreign EV manufacturers. And Tesla had already said back in 2016 they would like to install an India-wide network of supercharging stations, which is something that they have done in other countries where they have a presence. These charging stations, though designed to charge Teslas, can be used to charge other electric vehicles as well. Yes, the Indian government would be allowing some non-Indian competition into the market, but they would be doing so in an effort to accelerate the growth of that market.

Another option would be for Tesla to take a completely different approach – offering energy solutions to Indians via Tesla Energy. In case you don’t know, Tesla doesn’t just make cars, they also make solar panels and massive storage batteries for homes, corporations, and even cities.

Now, if you’re not from India, you might not realize this, but constant, reliable electricity doesn’t really exist here, and for a majority of the country’s population, regular power cuts, usually daily, are a way of life.

According to the World Bank, in FY 2016, India lost an estimated $86 billion thanks to its power sector’s shortcomings or roughly 4% of India’s GDP. And this could be a huge opportunity for Tesla – in fact, it could be a much more lucrative opportunity than electric vehicles, because the demand for a predictable, consistent supply of electricity is much higher than the demand for luxury electric cars. Then, once they’ve established a foothold in the Indian energy space, they would be in a better position to tackle the EV market.

But even if Tesla does decide to enter the Indian market, will it be worth their while? Because India isn’t really a car market and it’s definitely not a luxury car market. In fact, there are only 30 million cars in India and upwards of 169 million two-wheelers. Which brings us to our third solution, what if instead of cars, Tesla launched Superbike or Cyberbikes? Even Cyber Autos maybe?

It might sound a little out there but Tesla is known for changing the EV market and India is just a different market. While the demand for electric cars is still not established, we know for a fact that there is a market for two-wheelers. And if Tesla can make bikes as cool as their cars, then who knows.

No matter what, it would be interesting to see how Tesla approaches the India market after if they actually launch here in 2021.

Also published on The Indian Wire.