For many weeks, public health officials had expressed concern that a second wave of the coronavirus would hit New York City, which until recently had achieved striking success in beating back the outbreak after a devastating spring that left more than 20,000 residents dead.

On Sunday, with those fears growing, Mayor Bill de Blasio announced an emergency crackdown, saying that he intended to impose new restrictions in 20 hot spots in Brooklyn and Queens that have been experiencing rising positivity rates.

The plan is a major setback for New York City, amounting to the first significant reversal in the reopening and offering further evidence of the challenges in curbing the pandemic. The city over the last month had taken several strides forward, allowing indoor dining for the first time and becoming the first major school district in the country to bring children back into its public schools. 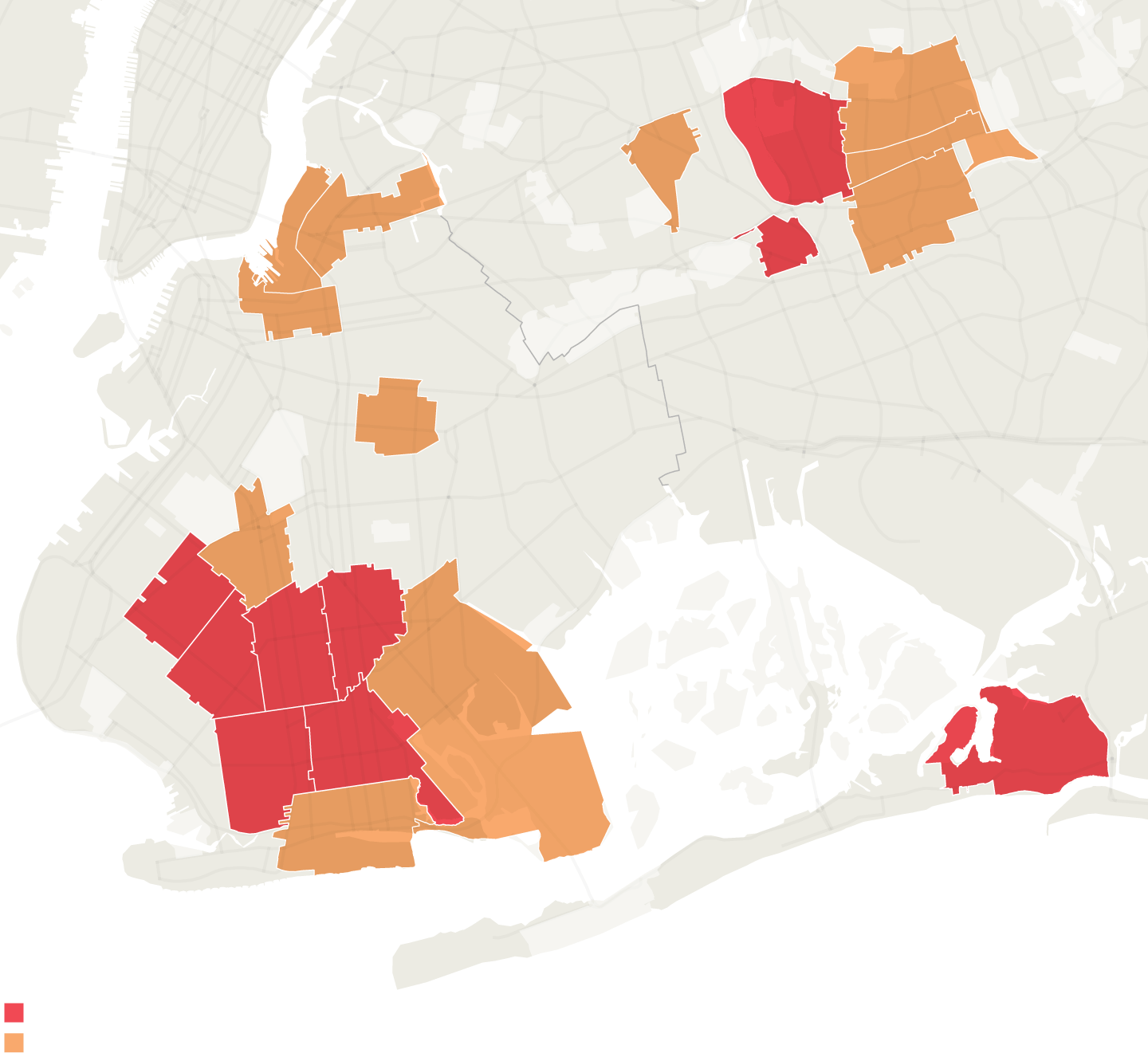 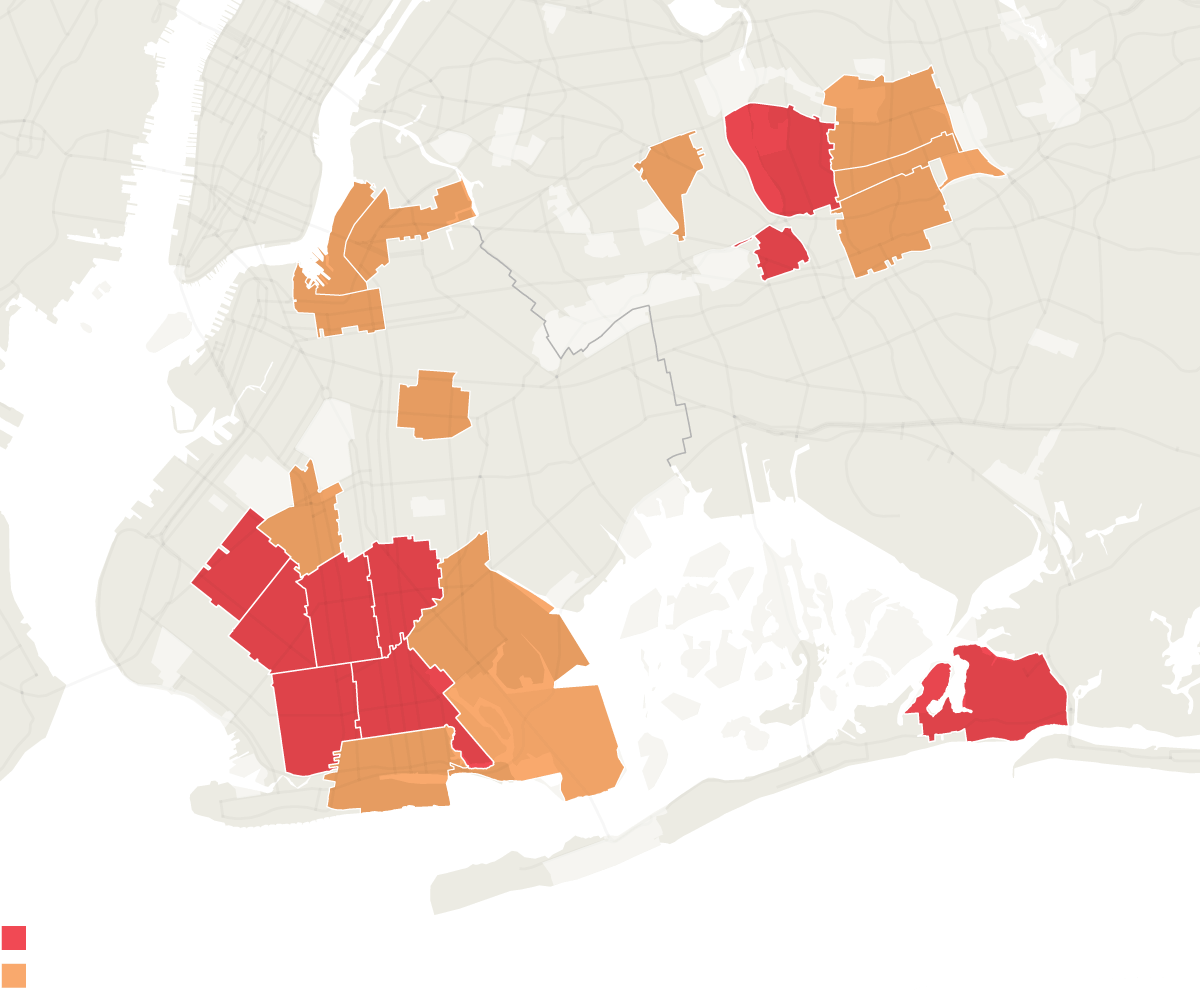 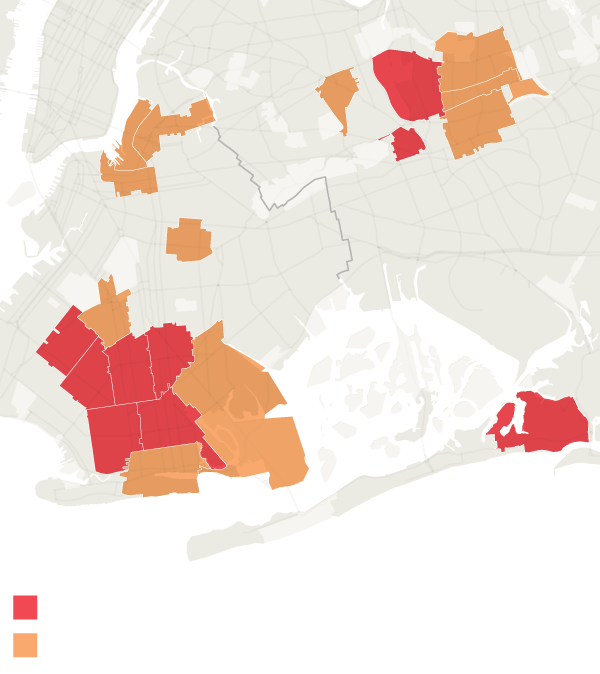 But under the new restrictions, Mr. de Blasio would close all schools — public and private — in nine of the city’s 146 ZIP codes, as well as all nonessential businesses. Indoor and outdoor dining in restaurants in those areas will not be allowed.

“Today, unfortunately, is not a day for celebration,” Mr. de Blasio said. “Today is a more difficult day.”

The nine areas have large populations of Orthodox Jews — communities where the virus has been spreading rapidly and where public health officials have struggled to persuade many residents to adhere to guidelines on mask wearing and social distancing.

Those areas all have had positivity rates in recent days of more than 3 percent — and some as high as 8 percent — in contrast to the city’s overall rate of about 1.5 percent. Public health officials have been worried that the uptick in cases would jump from Orthodox neighborhoods to others, leading to a resurgence of the virus across the city.

In another 11 ZIP codes, the city would allow schools to remain open but would ban indoor dining, the mayor said.

If approved by Gov. Andrew M. Cuomo, the plan would go into effect on Wednesday.

Reaction to the restrictions began to emerge from Jewish leaders on Sunday evening, after celebrations of the Sukkot holiday ended.

“I think it’s unfortunate that New York City continues to single out a couple of Hasidic Jewish neighborhoods when there are now 20 neighborhoods with serious spikes,” said David Greenfield, who represented Borough Park on the City Council until 2017 and now runs an anti-poverty group.

Many of the 20 ZIP codes that the city is focusing on do have sizable numbers of residents who are not Jewish, and the new restrictions could increase tensions between them and Orthodox Jews.

Most of the schools set to close are nonpublic schools, largely yeshivas in Orthodox Jewish neighborhoods that have been open for weeks. About 200 private schools will close, as well as 100 public schools, officials said.

The new restrictions come just days after the city’s system, which has about 1,800 public schools, fully reopened. Children returned to elementary school classrooms on Tuesday and to middle and high schools on Thursday. Principals and teachers have been working for months to prepare for in-person learning.

Health officials and City Hall first started talking in earnest about closing down parts of the city on Friday, as health indicators continued to worsen, a City Hall official said. In his remarks on Sunday, the mayor emphasized that the school closures were not prompted by outbreaks in public schools, but came “out of an abundance of caution.”

“We have seen very little coronavirus activity in our schools,” he said.

He said the virus spikes appeared to be confined to the ZIP codes he was targeting. “There does not have to be a second wave,” Mr. de Blasio said. “The fact is that these communities are experiencing a problem.”

There have been mounting concerns for weeks about transmission in yeshivas, which educate tens of thousands of children and play an essential role in Orthodox Jewish life in New York City. As early as May, when the city was still under a lockdown, a large yeshiva in Bedford-Stuyvesant, Brooklyn, was shuttered for violating the ban on in-person schooling.

And last month, the city ordered two yeshivas to close after coronavirus cases were detected. Some people in the Orthodox community, which includes several Hasidic groups, have privately raised concerns about social distancing and mask compliance in yeshiva buildings.

The nine ZIP codes subject to the most severe restrictions include portions of Far Rockaway and Kew Gardens in Queens, and Borough Park, Midwood, Gravesend, Bensonhurst and Sheepshead Bay in Brooklyn. The restrictions would last for two to four weeks, if not longer, depending on the success of efforts to curb the virus, the mayor said.

The city is also closely watching the 11 additional ZIP codes, which Mr. de Blasio described as a “real concern.”

City officials said a federal court order requires them to keep houses of worship open in the city, even in the nine ZIP codes. However, they are subject to 50 percent capacity limits.

Mr. de Blasio said he planned to work with the state on enforcement measures. He said he was not certain about the details, but that “we want the maximum education, maximum mask distribution, maximum enforcement.”

Asked whether transmission out of the affected ZIP codes was a major concern, Mr. de Blasio said that so far it had not been.

“We’re obviously going to watch carefully to see if people moving around from community to community is having an effect,” Mr. de Blasio said. “But to date we do not see that happening on a wide scale.”

Saskia Popescu, an epidemiologist at George Mason University, said closing businesses at the neighborhood level could work to tamp down on the virus, but that it would not be easy.

“Shutdowns are tricky, and targeted ones have shown both pros and cons,” Dr. Popescu said. “The hard part is really communicating with people so that you’re not pushing them to seek resources outside that affected area and potentially just pushing that ring further.”

Mr. Cuomo offered no immediate comment on whether he would approve Mr. de Blasio’s plan. The two have a combative relationship, and have often feuded over how to respond to the outbreak.

But as Mr. de Blasio was making his announcement, Mr. Cuomo did issue a statement that criticized unnamed local officials around the state for their failure to curb the virus.

“Local governments have not done an effective job of enforcement in these hot spot ZIP codes,” Mr. Cuomo said.

In his statement, he made no mention of whether a similar lockdown would be adopted in portions of Rockland and Orange Counties, north of the city.

Both have large populations of Orthodox Jews and have seen sharply rising positivity rates in recent days. Some ZIP codes in those regions have positivity rates double or triple those of hot spots in New York City.

Mr. de Blasio’s proposal satisfies a major demand from the city’s teachers’ union, which in recent days has called on the mayor to close public schools in neighborhoods where the virus is surging, rather than allowing the positivity rate to climb enough to shut down the entire school system.

The number of coronavirus cases in the affected areas of Brooklyn and Queens has been rising for weeks, especially in Orthodox Jewish communities. Local leaders said that surge was driven by denialism, wishful thinking around herd immunity and misinformation spread by President Trump, who in 2016 carried some precincts in these neighborhoods with more than 80 percent of the vote.

The Orthodox Jewish community in the city was devastated by the virus in the spring, when local leaders and media outlets estimated that hundreds might have died. But as case numbers began to recede in the summer, many seemed to believe that the community had developed herd immunity.

Public health officials said there was no evidence of such immunity, but distrust of the secular authorities runs deep in the Orthodox community.

As of now, Brooklyn’s Borough Park and Gravesend have positivity rates hovering around 8 percent. In Midwood, roughly 7 percent are testing positive.

In recent weeks, Orthodox leaders in Brooklyn have faulted the city government for what they contended was meager and inconsistent efforts to engage in community outreach.

The city health department first sounded the alarm about the escalating number of cases in these neighborhoods in late September and said that if case numbers did not begin to decline it would take aggressive action, including the closure of schools and businesses.

That threat sparked a backlash in the Orthodox community but also spurred a flurry of community action that led to a visible increase in mask-wearing on the street last week.

On Friday, hundreds of people gathered on one of the main shopping streets in Borough Park to pick up free masks being distributed by the Boro Park Jewish Community Council, which gave out more than 400,000 in less than two hours.

With the festival of Sukkot underway, the streets of the neighborhood were nearly deserted on Sunday, and Jewish-owned stores were closed.

Few people were willing to be interviewed, but one Hasidic man who declined to give his name would only say, “It’s not good to close,” adding, “Covid is over.”

In Far Rockaway, Sire Camara, 46, owner of Kaba Hair Braiding, said she was angered by the news of a new lockdown, which would force her to close.

“I don’t want to stay home, I have bills to take care of,” Ms. Camara said. “How am I going to pay my rent or afford food?“

She has owned the business for almost 10 years, but said the lockdowns in March and April were a major struggle.

“I am not used to staying at home for months and not leaving the house,” she said.