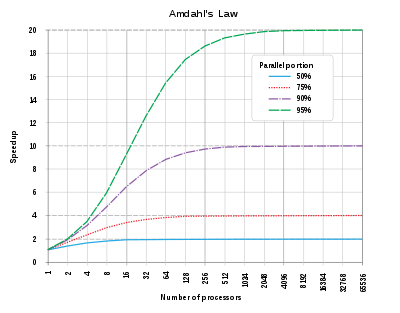 Evolution according to Amdahl's law of the theoretical speedup in latency of the execution of a program in function of the number of processors executing it. The speedup is limited by the serial part of the program. For example, if 95% of the program can be parallelized, the theoretical maximum speedup using parallel computing would be 20 times.

In computer architecture, Amdahl's law (or Amdahl's argument[1]) is a formula which gives the theoretical speedup in latency of the execution of a task at fixed workload that can be expected of a system whose resources are improved. It is named after computer scientist Gene Amdahl, and was presented at the AFIPS Spring Joint Computer Conference in 1967.

Amdahl's law is often used in parallel computing to predict the theoretical speedup when using multiple processors. For example, if a program needs 20 hours using a single processor core, and a particular part of the program which takes one hour to execute cannot be parallelized, while the remaining 19 hours (p = 0.95) of execution time can be parallelized, then regardless of how many processors are devoted to a parallelized execution of this program, the minimum execution time cannot be less than that critical one hour. Hence, the theoretical speedup is limited to at most 20 times (1/(1 − p) = 20). For this reason, parallel computing with many processors is useful only for highly parallelizable programs.

Amdahl's law can be formulated in the following way:

Amdahl's law applies only to the cases where the problem size is fixed. In practice, as more computing resources become available, they tend to get used on larger problems (larger datasets), and the time spent in the parallelizable part often grows much faster than the inherently serial work. In this case, Gustafson's law gives a less pessimistic and more realistic assessment of the parallel performance.[2]

A task executed by a system whose resources are improved compared to an initial similar system can be split up into two parts:

An example is a computer program that processes files from disk. A part of that program may scan the directory of the disk and create a list of files internally in memory. After that, another part of the program passes each file to a separate thread for processing. The part that scans the directory and creates the file list cannot be sped up on a parallel computer, but the part that processes the files can.

. The one concerning the part that would not benefit from it is therefore

after the improvement of the resources. Consequently, the execution time of the part that does not benefit from it remains the same, while the part that benefits from it becomes:

of the whole task after the improvement of the resources is then:

If 30% of the execution time may be the subject of a speedup, p will be 0.3; if the improvement makes the affected part twice as fast, s will be 2. Amdahl's law states that the overall speedup of applying the improvement will be:

Notice how the 20 times and 5 times speedup on the 2nd and 3rd parts respectively don't have much effect on the overall speedup when the 4th part (48% of the execution time) is accelerated by only 1.6 times. 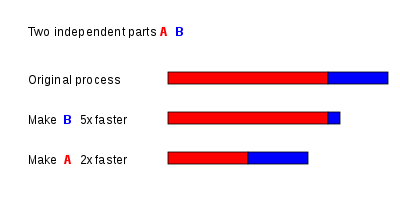 Assume that a task has two independent parts, A and B. Part B takes roughly 25% of the time of the whole computation. By working very hard, one may be able to make this part 5 times faster, but this reduces the time of the whole computation only slightly. In contrast, one may need to perform less work to make part A perform twice as fast. This will make the computation much faster than by optimizing part B, even though part B's speedup is greater in terms of the ratio, (5 times versus 2 times).

If the non-parallelizable part is optimized by a factor of

, meaning that the speedup is measured with respect to the execution time after the non-parallelizable part is optimized.

Next, we consider the case wherein the non-parallelizable part is reduced by a factor of

, and the parallelizable part is correspondingly increased. Then

The derivation above is in agreement with Jakob Jenkov's analysis of the execution time vs. speedup tradeoff.[3]

Relation to the law of diminishing returns

Amdahl's law is often conflated with the law of diminishing returns, whereas only a special case of applying Amdahl's law demonstrates law of diminishing returns. If one picks optimally (in terms of the achieved speedup) what to improve, then one will see monotonically decreasing improvements as one improves. If, however, one picks non-optimally, after improving a sub-optimal component and moving on to improve a more optimal component, one can see an increase in the return. Note that it is often rational to improve a system in an order that is "non-optimal" in this sense, given that some improvements are more difficult or require larger development time than others.

Amdahl's law does represent the law of diminishing returns if on considering what sort of return one gets by adding more processors to a machine, if one is running a fixed-size computation that will use all available processors to their capacity. Each new processor added to the system will add less usable power than the previous one. Each time one doubles the number of processors the speedup ratio will diminish, as the total throughput heads toward the limit of 1/(1 − p).

This analysis neglects other potential bottlenecks such as memory bandwidth and I/O bandwidth. If these resources do not scale with the number of processors, then merely adding processors provides even lower returns.

An implication of Amdahl's law is that to speedup real applications which have both serial and parallel portions, heterogeneous computing techniques are required.[4] For example, a CPU-GPU heterogeneous processor may provide higher performance and energy efficiency than a CPU-only or GPU-only processor.[5]