You Want 20% for Handing Me a Muffin? The Awkward Etiquette of iPad Tipping

Mina Dimyan frequents a Stamford, Conn., cafe, where he orders a cup of strong coffee for $3. It comes with a splash of guilt.

The clerk swipes Mr. Dimyan’s credit card and then swivels the store’s white iPad around. There is an uncomfortable pause. Prompts on the screen ask the 33-year-old human-resources recruiter to sign his name and pick a tip: 18%, 20%, 25%, a custom amount or “no tip.”

“It’s so awkward,” says Mr. Dimyan, who taps 20%. “You press the middle button so you don’t look cheap to the people behind you in line.”

Consumers face that disconcerting ritual at bakeries, coffee shops, food trucks and other businesses that use tablet credit-card readers such as Square. The devices often ask customers to make tipping decisions on the fly—with the person who just served them looking on, along with everyone else waiting in line. 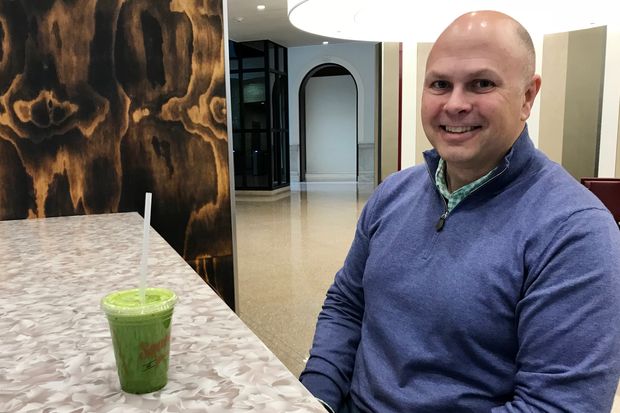 “It guilts you into it,” said Thom Kenney, a patron at Squeeze Juice Company in Boston on a recent morning. “It absolutely does, because they are standing there. You want to make them happy.”

Mr. Kenney, who is 48 and runs a recruitment firm, had just ordered the citrus and greens juice for $8.50. He picked the $1 tip option on a tablet screen displaying tip choices that rose to $3.

Johan Velez, a clerk at Squeeze, said he can’t stand to watch the ritual play out. After he turns the tablet around to the customer, he averts his eyes. 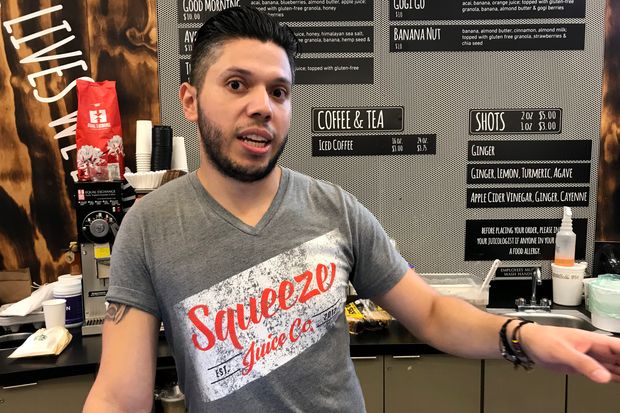 Johan Velez, who works at a juice bar in Boston, looks away when customers are paying so he doesn’t feel he is pressuring them to tip. Photo: Jennifer Levitz/The Wall Street Journal

Tipping has long been a sticky part of etiquette, and payment technology is making it more so. Susan Randall, a 49-year-old private investigator in Burlington, Vt., says she will tip for stellar service, such as “a little heart on my latte,” but that she is surprised by how often the iPad tip prompts appear—and by the suggested amounts. “You buy a muffin, and you tip the person who carried it 14 inches from the case to the counter? Please.”

There is no obligation to tip counter help, according to the Emily Post Institute, unlike sit-down service by a waiter, where 15% or 20% of the pretax bill is expected. The institute, a Vermont-based authority on manners, recommends occasional counter tipping if, for instance, a customer is a regular or receives notably good service.

Tip jars have long sat on counters, but consumers have all sorts of viable excuses for avoiding them or tossing in just a few coins, such as not having the right change, according to Michael Lynn, a professor and tipping expert at Cornell University’s School of Hotel Administration. Not so, he says, with the electronic tip prompts that explicitly require consumers to opt out of gratuities. “You can’t even pretend like you forgot,” he says. “It clearly ups the social pressure to tip.”

San Francisco-based Square Inc. has built a following among small businesses with its swiveling iPad payment system, introduced in 2013, as well as smartphone credit-card readers and a dual-screen register that doesn’t need to be flipped around. The company’s products, used by millions of sellers, make it easier for businesses to take credit cards in an economy where the role of cash is diminishing. 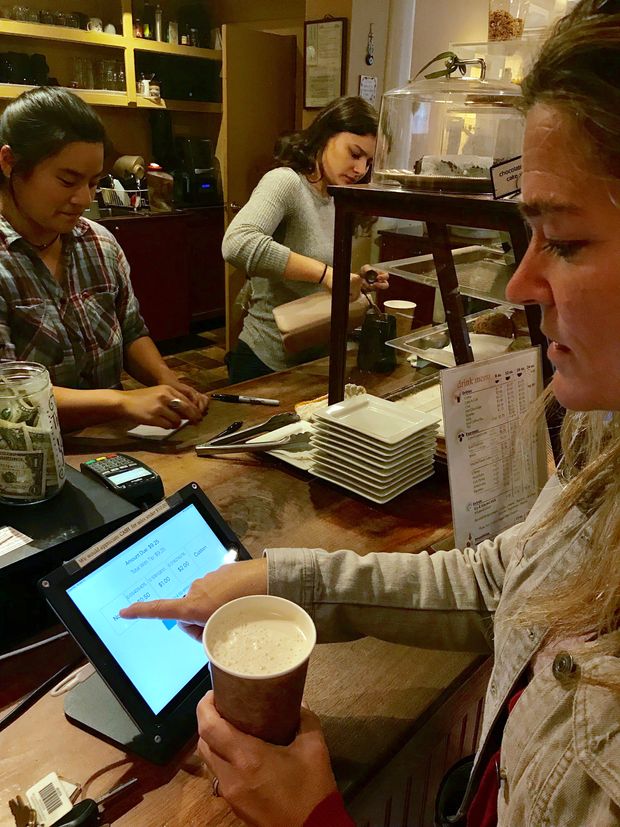 Businesses are able to avoid clunky cash registers and deploy a “nonintrusive way to ask for a tip,” says Square spokeswoman Katie Dally, who says workers behind the counters are focused on business, not the amount of tips.

Proprietors decide whether to turn on the tip prompt, and they can customize the suggested tip amounts.

Patrons always have the choice of customizing a tip to leave the amount they want. And they can always tap “no tip” and be on their way.

“It will be right there in front of you and easy to select,” says Square’s Ms. Dally.

“You can certainly walk away without tipping, but it’s hard to do, especially if you’re Canadian,” says Keir Vallance, who is 46 and teaches law in Saskatchewan, referring to the country’s reputation for politeness.

In Los Angeles, Daniel Nigro believes a 10% tip is usually sufficient at the counter. He takes the extra steps to customize that lower amount in the presence of the clerks, who to him seem to be expecting more.

“I feel like they are watching me when I do it,” says Mr. Nigro, who is 36 and a songwriter. “They’re looking at you.”

He hit his tipping point with the situation in May, writing in a Twitter post: “Why can’t Square have a tip option that says `it’s nothing personal, but I just can’t give you 20% for handing me a pre-made sandwich.’”

Clerks say it gets weird when they have to walk puzzled customers through the tipping option after swiveling the iPad around. “I don’t want to feel like I’m begging,” says Latitia Weeden, who works at a creperie in Boston’s South Station.

Joe Sheehan, co-owner of Dean’s Zesty Booch, a kombucha brewery in Bozeman, Mont., says people appreciate the tipping option, although some stare at the screen and ask, “What am I looking at?”

“It’s always kind of awkward,” he says. “I’ll tell them you can either give me a tip or not. Your choice. No worries, whatever you want to do. I’ll look away now.” In Connecticut, Mr. Dimyan, who says he feels his $3 coffee is pricey enough as it is, vented about the electronic tip prompts in a Twitter post earlier this month.

Write to Jennifer Levitz at jennifer.levitz@wsj.com