Twitter on Wednesday released a trove of 10 million tweets it says represents the full scope of foreign influence operations on the platform dating back nearly a decade — including Russia's consistent efforts to disparage Hillary Clinton and an initially erratic approach to Donald Trump that eventually settled on a concerted pro-Trump message during the 2016 campaign.

The huge data cache consists of tweets from some 3,400 accounts tied to the Kremlin troll farm known as the Internet Research Agency and 770 others linked to Iran. It also includes some two million gifs, videos and other visual content. Twitter said it's making the information available to "enable independent academic research and investigation," according to a company blog post.

The Russian tweets around the 2016 presidential election showed distinct patterns when it came to Clinton and Trump, according to researchers at the non-partisan Atlantic Council's Digital Forensic Research Lab, which has been scouring the data since late last week.

While the Clinton animus was clear from the start, it took the IRA a while to settle on its Trump strategy, as the Republican primary played out.

By signing up you agree to receive email newsletters or alerts from POLITICO. You can unsubscribe at any time.

"Literally from the day Clinton announced her candidacy they were attacking her," Ben Nimmo, an information defense fellow at the lab, told POLITICO. "But on the Republican side, in the early days, they seemed to be backing more than one horse."

He described "peaks and troughs — a lot of pro-Trump content and a lot of anti-Trump content" in 2015 and 2016, adding that Trump's GOP rival Sen. Ted Cruz (R-Texas) got a similar mixed treatment while former Florida Gov. Jeb Bush was the target of negative content. But Nimmo said the messaging around Trump turned decidedly in his favor around the time the reality show star began locking up the Republican nomination.

That period of time is said to be of interest to investigators with special counsel Robert Mueller's team, which is looking into Russian interference in the 2016 U.S. presidential election — including a June 2016 Trump Tower meeting between Trump campaign officials and Russian lawyer Natalia Veselnitskaya. 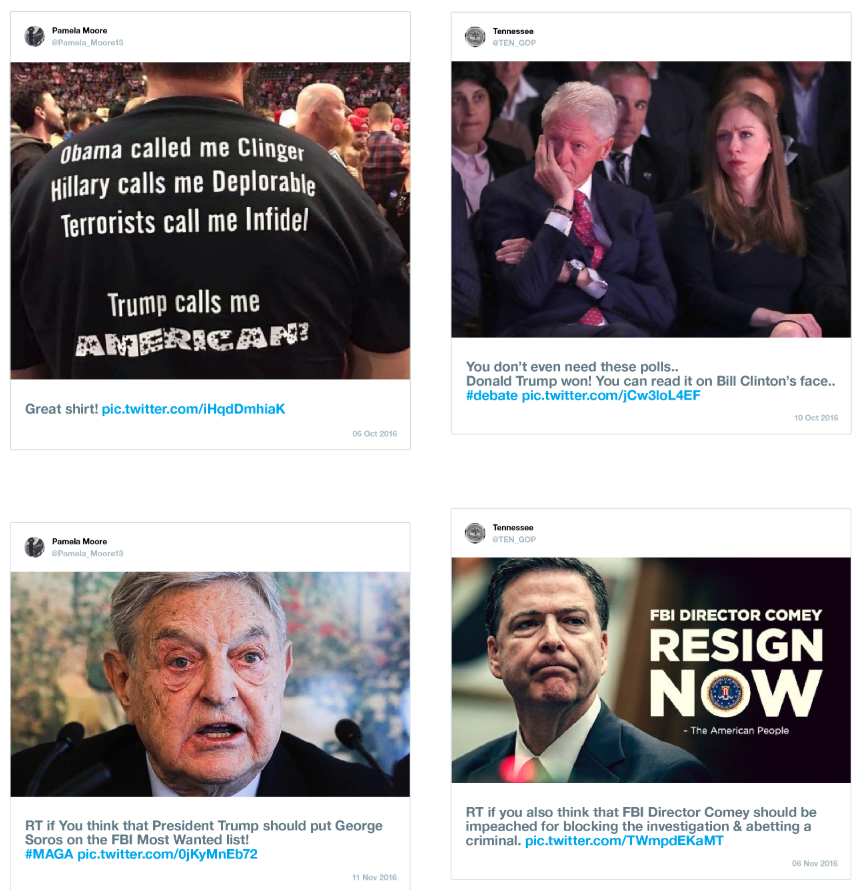 By election day, the Russian trolls' tweets were nearly uniformly pro-Trump, expressing sentiments like, "I don’t want a criminal in office! I’d vote for Monica before I vote for Killary! #Trump #MakeAmericaGreatAgain #TrumpForPresident," according to the Atlantic Council lab's findings published Wednesday.

After election day, though, the researchers found the trolls returned to their mixed-bag approach to Trump — for example, both cheering and jeering what were reported to be his disparaging remarks in January 2018 about Haiti and African nations. "Call it what it is — racist!," read one tweet in part. "Y’all have to admit that Trump is right," read another.

Nimmo said the research into the data is still in its early stages, but he said it's clear that much of the U.S.-focused tweeting was aimed at simply fomenting discord around political and social issues, a dynamic similar to what's already been identified in Facebook ads and highlighted in Mueller's indictment of Russian nationals and entities over 2016 election interference.

The archive includes Russian-placed tweets arguing both sides of the gun debate the day after the Dec. 2, 2015 attack in San Bernardino, Calif., that left more than a dozen people dead. "Mass shooting occurs even in #GunFreeZones so people is the problem not guns #Prayers4California," read one. "[M]ass shooting wont [sic] stop until there are #GunFreeZones #Prayers4California," read another.

Twitter and Facebook have been widely criticized since the 2016 election for not doing more to stem the abuse of their platforms by Russians and other foreign actors hoping to manipulate the American political landscape. Some lawmakers on Capitol Hill say the companies have failed to do proper postmortems of that interference, including via digging into the enormous stores of online data they alone hold.

The newly released Twitter data may eventually shed light on the style as well as substance of foreign campaigns.

Russian accounts appeared to be particularly good at building personality into their tweets, such as those published by accounts like @TEN_GOP and @Jenn_Abrams, the Atlantic Council researchers found. By comparison, the Iranian operation was "much clumsier and clunkier and less engaging," focused mostly getting users to click on government propaganda, Nimmo said.

The Twitter database is not limited to U.S. influence operations. Many of the Kremlin-linked tweets are in Russian and appeared aimed at shaping politics in Russia and Ukraine, according to Nimmo.

While aspects of social media foreign influence operations have been disclosed in bits and pieces, he said, "the massive value of this Twitter dump is now it looks like we've got the lot."