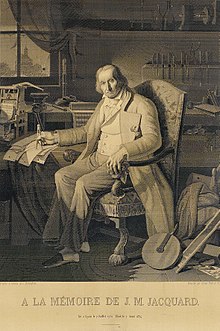 This portrait of Jacquard was woven in silk on a Jacquard loom and required 24,000 punched cards to create (1839). It was only produced to order. Charles Babbage owned one of these portraits; it inspired him in using perforated cards in his analytical engine.[1] It is in the collection of the Science Museum in London, England.[2]

The Jacquard machine (French: [ʒakaʁ]) is a device fitted to a power loom that simplifies the process of manufacturing textiles with such complex patterns as brocade, damask and matelassé.[3] It was invented by Joseph Marie Jacquard in 1804.[4] The loom was controlled by a "chain of cards"; a number of punched cards laced together into a continuous sequence.[5] Multiple rows of holes were punched on each card, with one complete card corresponding to one row of the design. Several such paper cards, generally white in color, can be seen in the images below. Chains, like Bouchon's earlier use of paper tape, allowed sequences of any length to be constructed, not limited by the size of a card.

It is based on earlier inventions by the Frenchmen Basile Bouchon (1725), Jean Baptiste Falcon (1728), and Jacques Vaucanson (1740).[6] A static display of a Jacquard loom is the centrepiece of the Musée des Tissus et des Arts décoratifs[7] in Lyon. Live displays of a Jacquard loom are available at a few private museums around Lyon and also twice a day at La Maison des Canuts, as well as at other locations around the world.

Both the Jacquard process and the necessary loom attachment are named after their inventor. This mechanism is probably one of the most important weaving inventions as Jacquard shedding made possible the automatic production of unlimited varieties of pattern weaving. The term "Jacquard" is not specific or limited to any particular loom, but rather refers to the added control mechanism that automates the patterning. The process can also be used for patterned knitwear and machine-knitted textiles, such as jerseys.[8]

This use of replaceable punched cards to control a sequence of operations is considered an important step in the history of computing hardware.

In former times, if figured designs were required, this was done on a drawloom. The heddles with warp ends to be pulled up were manually selected by a second operator (draw boy), apart from the weaver. It was slow and labour-intensive, with practical limitations on the complexity of the pattern.

The first important improvement of the draw loom took place in 1725, when Basile Bouchon introduced the principle of applying a perforated band of paper. A continuous roll of paper was punched by hand, in sections, each of which represented one lash or tread, and the length of the roll was determined by the number of shots in each repeat of pattern. The Jacquard machine subsequently evolved from this.

It is difficult to determine what part of the 'Jacquard' machine was designed by Jacquard himself. He may have combined the best mechanical elements of other inventors, but - at any rate - the machine he made must have differed from its predecessors in arrangement and minor working details. It was similar in most general principles to Vaucanson's arrangement, except that he made use of Jean-Baptiste Falcon's individual paste board cards and his square prism (or card 'cylinder'), which he is credited with having fully perforated on each of its four sides in lieu of Vaucanson's perforated 'barrel'. Jacquard's machine also contained eight rows of needles and uprights as compared with Vaucanson's double row, of which modifications enabled him to increase the figuring capacity of the machine. In his first machine, he supported the harness by knotted cords, which he elevated by a single trap board.

One of the chief advantages claimed for the Jacquard machine was that unlike previous damask-weaving machines, in which the figuring shed was usually drawn once for every four shots, with the new apparatus, it could be drawn on every shot, thus producing a fabric with greater definition of outline.[9]

Jacquard's invention had a deep influence on Charles Babbage. In that respect, he is viewed by some authors as a precursor of modern computing science.[10] 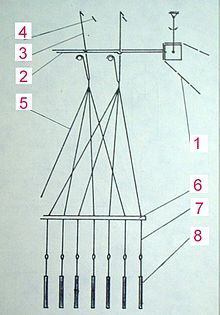 On the diagram to the right, the cards are fastened into a continuous chain(1) which passes over a square box. At each quarter rotation a new card is presented to the Jacquard head which represents one row. The box swings from the right to the position shown and presses against the control rods(2). Where there is a hole the rod passes through the card and is unmoved whereas if the hole is not punched the rod is pushed to the left. Each rod acts upon a hook(3). When the rod is pushed in the hook moves out of position to the left, a rod that is not pushed in leaves its hook in place. A beam(4) then rises under the hooks and those hooks in the rest location are raised; the hooks that have been displaced are not moved by the beam. Each hook can have multiple cords(5). The cords pass through a guide(6) and are attached to their heddle(7) and a return weight(8). The heddles raise the warp to create the shed through which the shuttle carrying the weft will pass. A loom with a 400 hook head might have four threads connected to each hook, resulting in a fabric that is 1600 warp ends wide with four repeats of the weave going across.

The term "Jacquard loom" is somewhat inaccurate. It is the "Jacquard head" that adapts to a great many dobby looms that allow the weaving machine to then create the intricate patterns often seen in Jacquard weaving.

Jacquard looms, although relatively common in the textile industry, are not as ubiquitous as dobby looms which are usually faster and much cheaper to operate. However, unlike jacquard looms, they are not capable of producing so many different weaves from one warp. Modern jacquard looms are controlled by computers in place of the original punched cards, and can have thousands of hooks.

The threading of a Jacquard loom is so labor-intensive that many looms are threaded only once. Subsequent warps are then tied into the existing warp with the help of a knotting robot which ties each new thread on individually. Even for a small loom with only a few thousand warp ends the process of re-threading can take days. 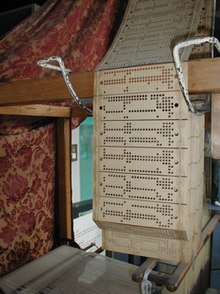 Punched cards in use in a Jacquard loom. 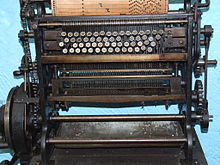 A punch for Jacquard cards

Originally the Jacquard machines were mechanical, and the fabric design was stored in a series of punched cards which were joined to form a continuous chain. The Jacquards often were small and only independently controlled a relatively few warp ends. This required a number of repeats across the loom width. Larger capacity machines, or the use of multiple machines, allowed greater control, with fewer repeats, and hence larger designs could be woven across the loom width.

A factory must choose looms and shedding mechanisms to suit its commercial requirements. As a rule the more warp control required the greater the expense. So it is not economical to purchase Jacquard machines if one can make do with a dobby mechanism. As well as the capital expense, the Jacquard machines are more costly to maintain, as they are complex and require higher skilled personnel; an expensive design system is required to prepare the designs for the loom, and possibly a card-cutting machine. Weaving is more costly since Jacquard mechanisms are more likely to produce faults than dobby or cam shedding. Also, the looms will not run as quickly and down-time will increase because it takes time to change the continuous chain of cards when a design changes. For these reasons it is best to weave larger batches with mechanical Jacquards.

It is recorded that in 1855 a Frenchman [11] adapted the Jacquard mechanism to a system by which it could be worked by electro-magnets. There was significant interest, however trials were not successful, and the development was soon lost in history.

Bonas Machine Company Ltd.[12] launched the first successful electronic Jacquard at ITMA,[13] Milan in 1983. Although the machines were initially small, modern technology has allowed Jacquard machine capacity to increase significantly, and single end warp control can extend to more than 10,000 warp ends. This avoids the need for repeats and symmetrical designs and allows almost infinite versatility. The computer-controlled machines significantly reduce the down time associated with changing punched paper designs, thus allowing smaller batch sizes. However, electronic Jacquards are costly and may not be required in a factory weaving large batch sizes, and smaller designs. The larger machines allowing single end warp control are very expensive, and can only be justified where great versatility is required, or very specialized design requirements need to be met. For example, they are an ideal tool to increase the ability and stretch the versatility of the niche linen Jacquard weavers who remain active in Europe and the West, while most of the large batch commodity weaving has moved to low cost areas.

Jacquard weaving of course uses all sorts of fibers and blends of fibers, and it is used in the production of fabrics for many end uses. Research is under way to develop layered and shaped items as reinforcing components for structures made from composite materials.

The Jacquard head used replaceable punched cards to control a sequence of operations. It is considered an important step in the history of computing hardware.[14] The ability to change the pattern of the loom's weave by simply changing cards was an important conceptual precursor to the development of computer programming and data entry. Charles Babbage knew of Jacquard looms and planned to use cards to store programs in his Analytical Engine. In the late 19th century, Herman Hollerith took the idea of using punched cards to store information a step further when he created a punched card tabulating machine which he used to input data for the 1890 U.S. Census. A large, punched-card-based data processing industry developed in the first half of the twentieth century, dominated by the International Business Machine corporation (IBM), with its line of unit record equipment. The cards were used for data, however, with programming done by plugboards.

Some early computers, such as the 1944 IBM Automatic Sequence Controlled Calculator (Harvard Mark I) received program instructions from a paper tape punched with holes, similar to Jacquard's string of cards. Later computers executed programs from higher-speed memory, though cards were commonly used to load the programs into memory. Punched cards remained in use in computing up until the mid 1980s.

In fact, due to its method of operation, an argument could be made that the Jacquard Loom, rather than Charles Babbage's unbuilt Difference Engine, was the first computer as it produced an output in accordance with the program fed into it.