Android is the world’s most ubiquitous OS and one of the most important parts of Google’s business. But it’s becoming clearer that the company no longer wants the word associated with its phones. The latest evidence is in the transcript for its event this week in New York City.

“Android” wasn’t said a single time during the Made by Google 2018 keynote. It marks the first time ever that Google has held a public-facing hardware event like this — since the introduction of the operating system in 2008 — without at least mentioning it by name.

That’s not to mention all the brands and products that Google has introduced in the last couple years that have left behind any mention of the OS, often in favor of the Google moniker itself. “Google One,” for its all-in-one cloud storage offering. “Google Tasks,” for its new task manager app. “Google Allo” and “Google Duo” for its latest attempts at Android messaging and video calling, respectively. Not everything is being rebranded as “Google” obviously, but it’s a popular substitute.

Of course, the name remains the title of most Android OS offshoots much the same way Android hasn’t been renamed: Android TV, Android Auto, and Android Things are still around. (Although it was confirmed that Google’s Home Hub Smart Display isn’t running Android Things, but rather the “Cast platform”. And we confirmed it’s being used to test Fuchsia OS, too.)

It’s no secret that the Google Pixel 3 and Google Pixel 3 XL run Android, too — far from it. You can find the word in the Settings app, Google will of course tell you directly if you ask, and the company still talks up Android and all its latest features loud and proud at its annual developer event where the Pixel — the phone known to get the latest versions the quickest — is definitely not missing.

But the Android brand has been quickly disappearing from Google’s products and its marketing messages since the launch of the original Google Pixel. That phone had no obvious mention of Android except for a few apps. No mention of Android on the retail box. Not even a mention on the boot screen (now, the Pixel phones say “Powered by Android” on boot, a requirement for third parties). And this year’s keynote was probably the most muted yet in terms of the little green robot.

But Chrome OS was front-and-center

While Android went unsaid, Google had no shame talking Chrome OS, which powers the new Pixel Slate tablet. Google told an entire story around Chrome OS, where it’s come from, why it makes sense on the tablet, and touted it as a great desktop alternative to Windows and macOS. 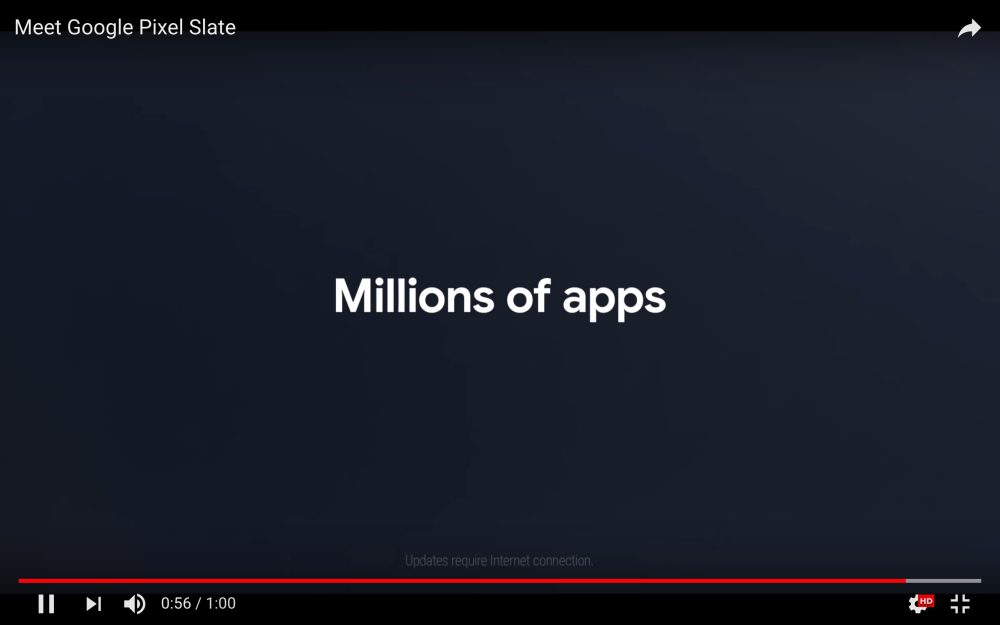 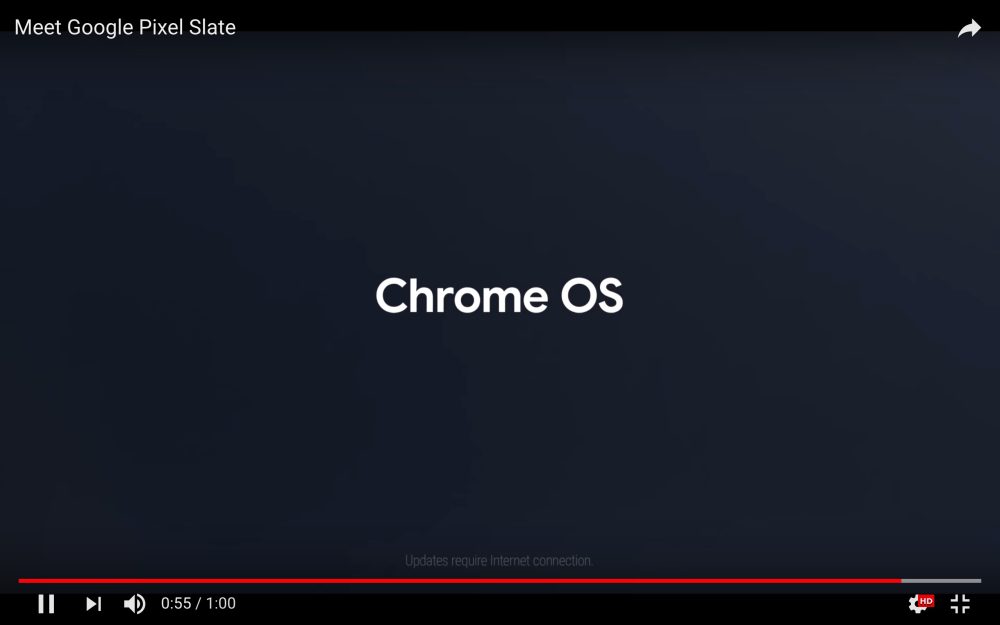 To me it seemed Chrome OS was clearly marketed as a standout feature of the Pixel Slate. To add insult to injury for Android, the “universe” of Android apps that can now run on Chrome were referred to as simply “apps” or “apps from the Google Play Store” during the keynote.

chromeOS definitely had the spotlight on 10/9

So why has it disappeared from the name of so many apps? And why did the word go entirely unsaid for the first time during this week’s event? And why — as you can see — is chromeOS (apparently that’s the new formatting for that brand?) totally in the clear to get a spotlight while Android isn’t?

Google’s traditionally quiet about the reasoning behind its branding decisions, but we can make an educated guess.

Android sounds technical, has baggage, and might be stale

For one, there’s public perception. “Android phones” have a reputation of being cheaper and lower-quality than “iPhones” in popular culture, regardless of that being true for some but not all of them. Since the very beginning of the platform, one attractive aspect of Android phones as an alternative to the iPhone has been their oftentimes lower prices — or at least that those affordable models exist.

It’s understandable that, given the Android brand’s association with “lower quality” non-premium phones that Google doesn’t want to associate the name of that OS with its phones — at least not in terms of the public-facing marketing message. Android phones are made by dozens of scattered manufacturers, all with varying approaches to their products, their design, their features, etc. — which has lead to an arguably good thing: immense diversity of phones running Android today. But that means “Android” doesn’t really have much meaning other than just being not-iPhone.

Rather, Google has spent millions over the last few years building a brand around the word Pixel and the various aspects you might associate it with — most notably its stellar camera. Like the other “iPhone” and “Galaxy” brand names that are ubiquitously known in the smartphone space, Google wants to build one of its own. And it doesn’t want the baggage of the Android connotation mucking up the image of a phone that competes with the iPhone and costs upwards of $1,000. 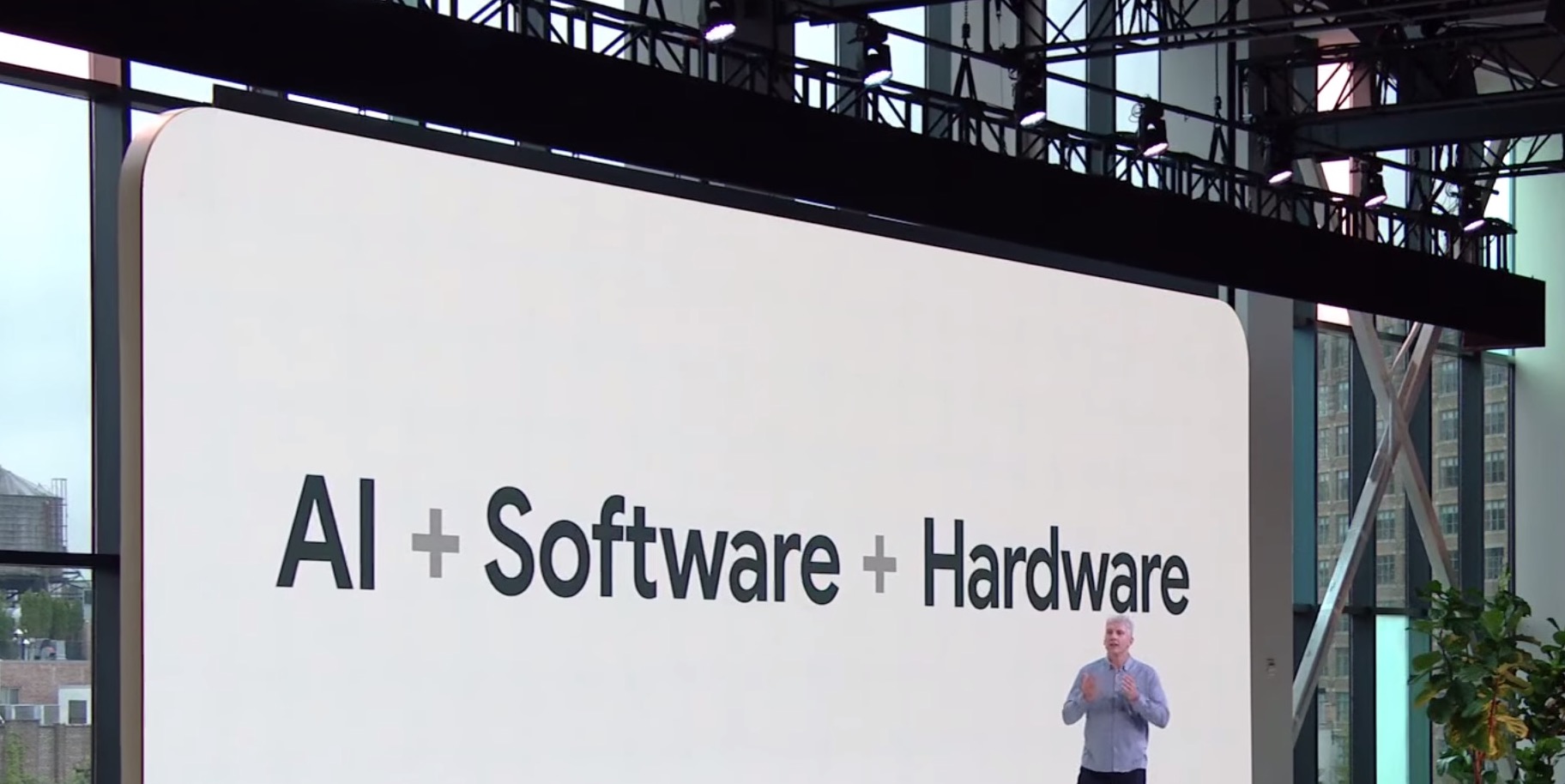 Another aspect might simply be Google reconsidering whether the Android brand sends the best message to the much broader diversity of potential customers Google wants to reach with its products going forward. One problem might be that the word just sounds robotic and technical — the opposite of the friendly and homey image Google’s built around its current products.

A person close to the company’s marketing efforts told us that, even before the Made by Google hardware initiative, as Google moved from marketing its products from niche markets to marketing them to mainstream audiences, the Android brand was ineffective.

The person added that, with this in mind, there’s an internal understanding that one of Google’s longer term goals is to completely drop Android as a brand, although such a direction has been controversial with “some key players who are attached” to it. Google of course hasn’t made any official indication that it plans to move on from the brand, so that’s yet to be seen — although clearly there’s growing evidence that this is an intentional decision for its consumer marketing messages.

For historical context, at the Made by Google 2017 event and launch of the Pixel 2, the word Android was mentioned one single time. Google touted the latest features of Android Oreo saying that those who “already have a Pixel recently received the Android Oreo update,” and that “as a Pixel user, you’ll always be the first to get the OS and security updates without having to do anything.”

During the Made by Google 2016 keynote, where the company launched the Google Pixel, Google Wifi, its Daydream View headset, the Google Home, and more, Google mentioned Android six times. So looking at only that one — admittedly specific — metric, there’s been a notable decline.

… but Android’s not gone yet

All this said, the Android brand is far from dead yet. At least on the technical side of things, there’s no reason to expect that Google will rename its mobile operating system anytime soon. Android was mentioned countless times during the Google I/O 2018 keynote, and I’d expect that to continue for years to come. And even on the Google Pixel phones, there are some stragglers that have remained. The Android Auto app is pre-installed for connecting your phone to car infotainment systems.

But when will Google’s auto infotainment system get a public-facing rebrand to ditch the Android name? I wouldn’t be surprised if that’s sooner rather than later.