Most of the time, The New York Times asks you to read something. Today we are inviting you, simply, to look. On this page you will find maps showing almost every building in the United States.

Why did we make such a thing? We did it as an opportunity for you to reconnect with our cities and explore them in detail. To find the familiar, and to discover the unfamiliar.

So … look. Every black speck on the map below is a building, reflecting the built legacy of the country.

Use the search bar to find a place and explore the interactive map below. Use two fingers to pan and zoom the map.

There was a time when every car's glove compartment was crammed with tattered fold-out road maps, trim rectangles that became table-size monsters that challenged you to refold them neatly.

We traced our proposed routes ahead of time, seeing that, say, after New Jersey would come Pennsylvania, which would take forever to cross, and then Ohio, Indiana, Illinois, Iowa and beyond. The maps connected us to the places.

Fewer of us use maps like that today. We gaze at our phones, pinching and stretching an image but seeing the world through a little rectangular window.

The phone’s guidance is better, but the view is not. We’re less likely to know what we are driving past.

“We lose what’s fascinating about a place by not having this bigger picture,” said Susan Crawford, a professor at Harvard Law School whose work involves cities and technology, who looked at the images at our request. “They make you think big thoughts. Everybody becomes Robert Moses looking at these maps.”

These images are drawn from a huge database that Microsoft released to the public this year. The company’s computer engineers trained a neural network to analyze satellite imagery and then to trace the shapes of buildings across the country. Such information has been available before in some places, but this is the first comprehensive database covering the entire United States.

In some cases, we have augmented the data with information from state and local governments that have collected their own.

Classic maps answer questions like: How do I get from Point A to Point B? These data images, instead, evoke questions — sometimes, simply: What’s that?

We found fascinating patterns in the arrangements of buildings. Traditional road maps highlight streets and highways; here they show up as a linear absence.

Where buildings are clustered together, in downtowns, the image is darker, dense. As suburbs stretch out with their larger lawns and malls, the map grows lighter. Your eye can follow the ways that development conforms to landscape features like water and slopes.

You can read history in the transition from curving, paved-over cow paths in old downtowns to suburban sprawl; you can detect signals of wealth and poverty, sometimes almost next door to each other. It all reveals what Andy Woodruff, a cartographer, calls “the sometimes aesthetically pleasing patterns of the built environment.”

These images don’t just reveal cityscapes; they reveal ourselves.

Below, more details on what the map reveals about the structures that surround us.

The nation’s expansion shows itself: The clustered development of the original colonies flowed west, with scattered cities and towns linked, like beads on a string, by rivers, highways and railroads. 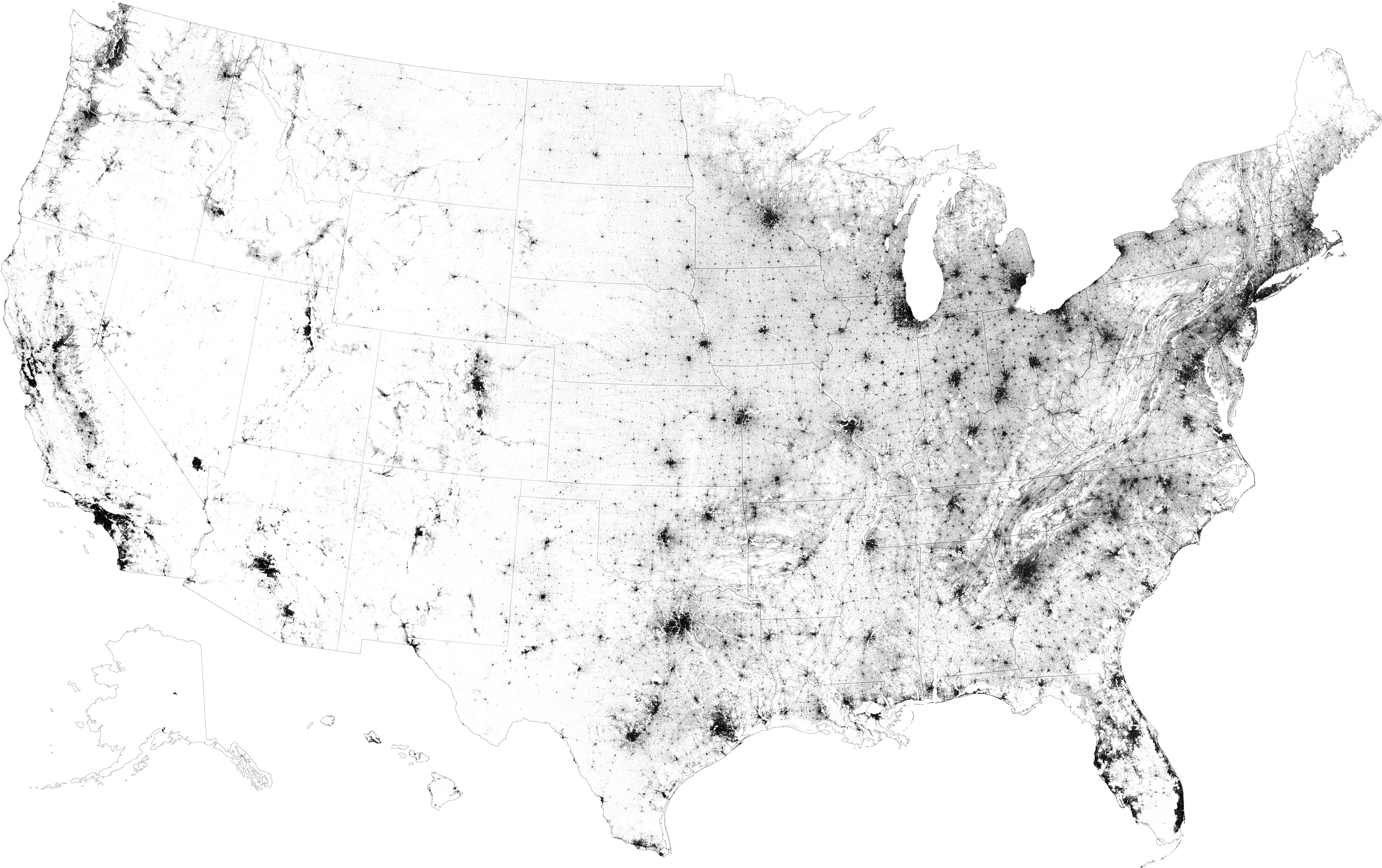 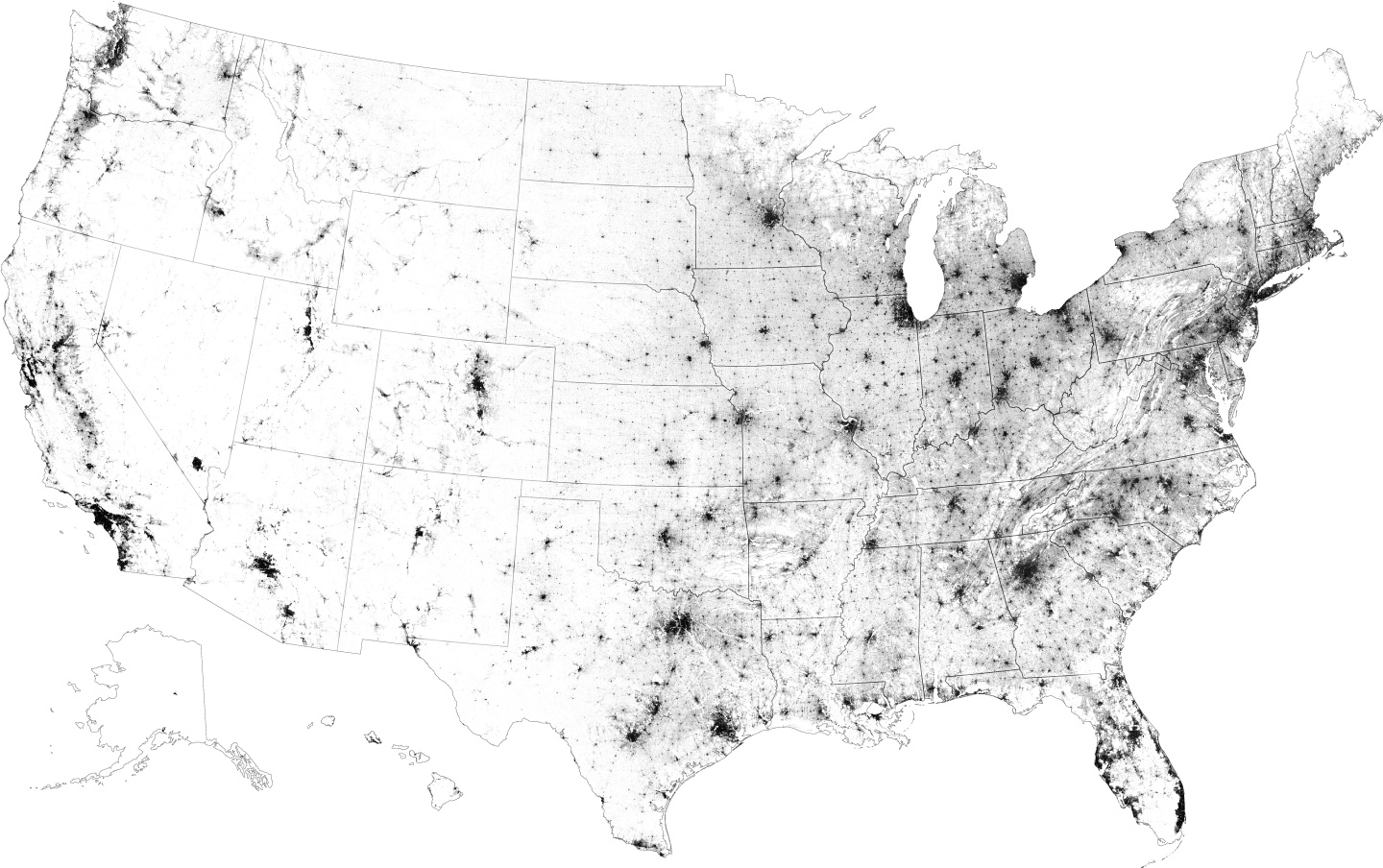 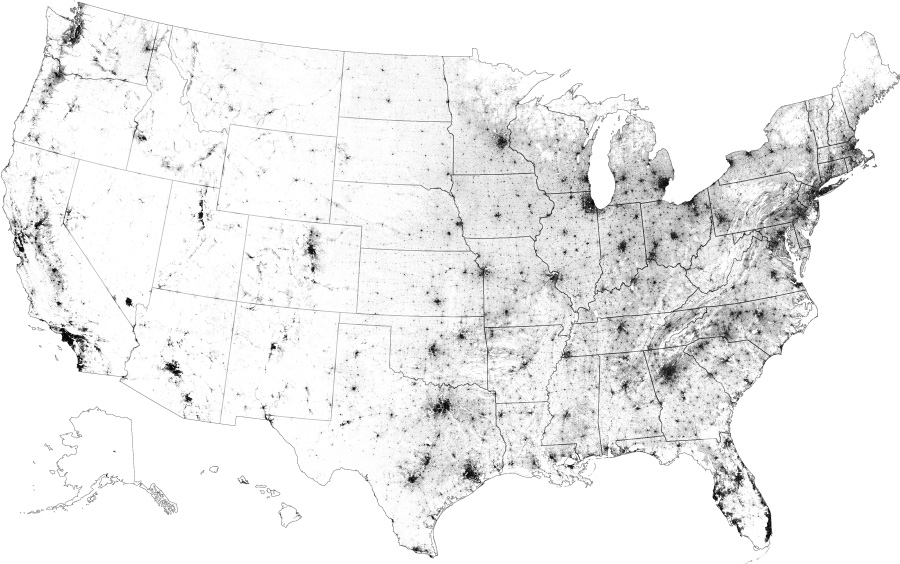 Appalachia We settle where we can, and find ourselves conforming to the curves, ridges and valleys of the landscape. The towns and settlements of Appalachia cluster in the nooks that the ranges allow, tracing the outline of the geologic thrust and collision of tectonic plates over the course of half a billion years. 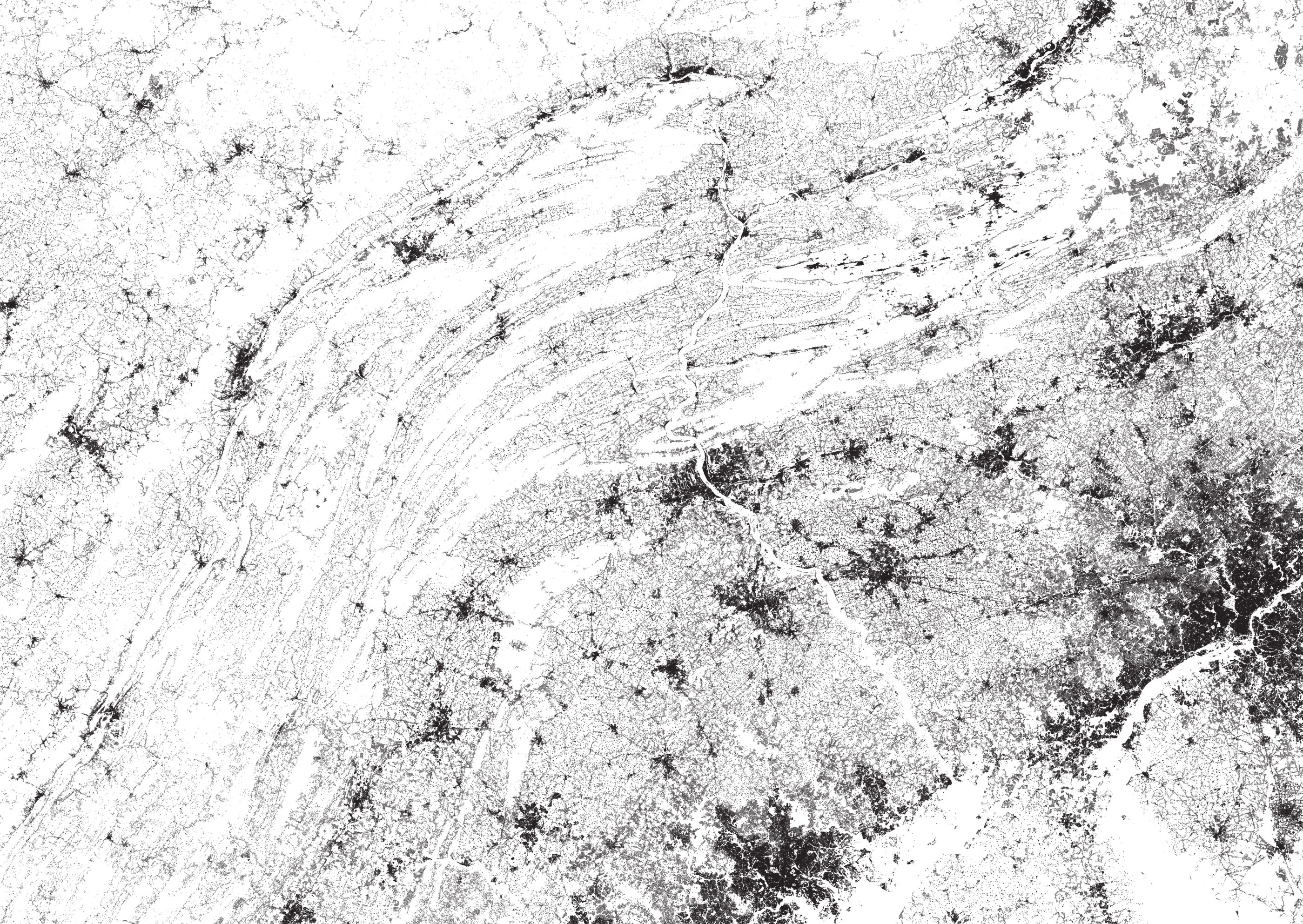 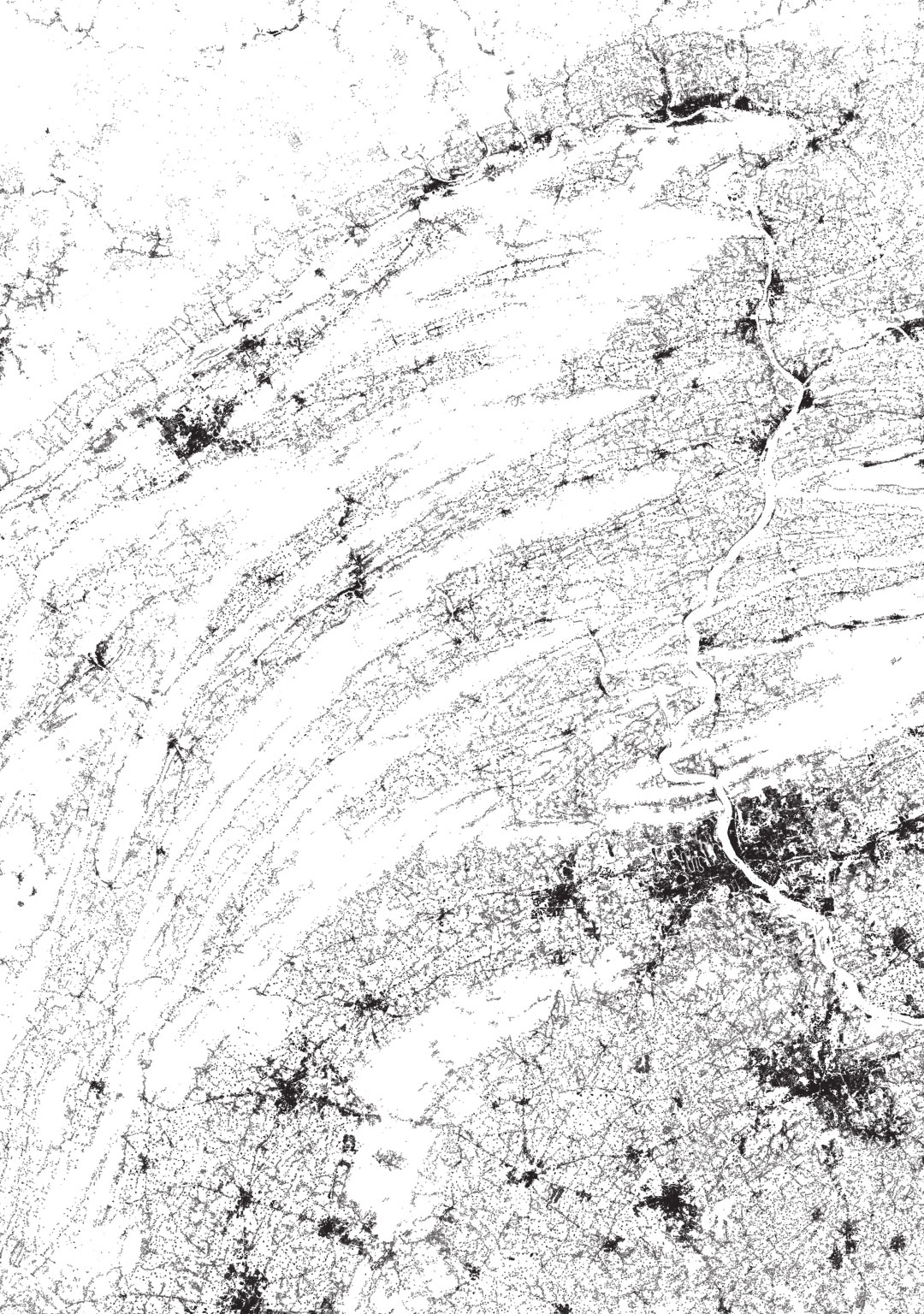 South of New Orleans This arrangement of buildings along a narrow spit of land on either side of a Louisiana bayou shows the imprint of the region’s history under France: “long lot” development, which stretched skinny holdings laterally away from important waterways. Geography shapes settlement, but culture does, as well. 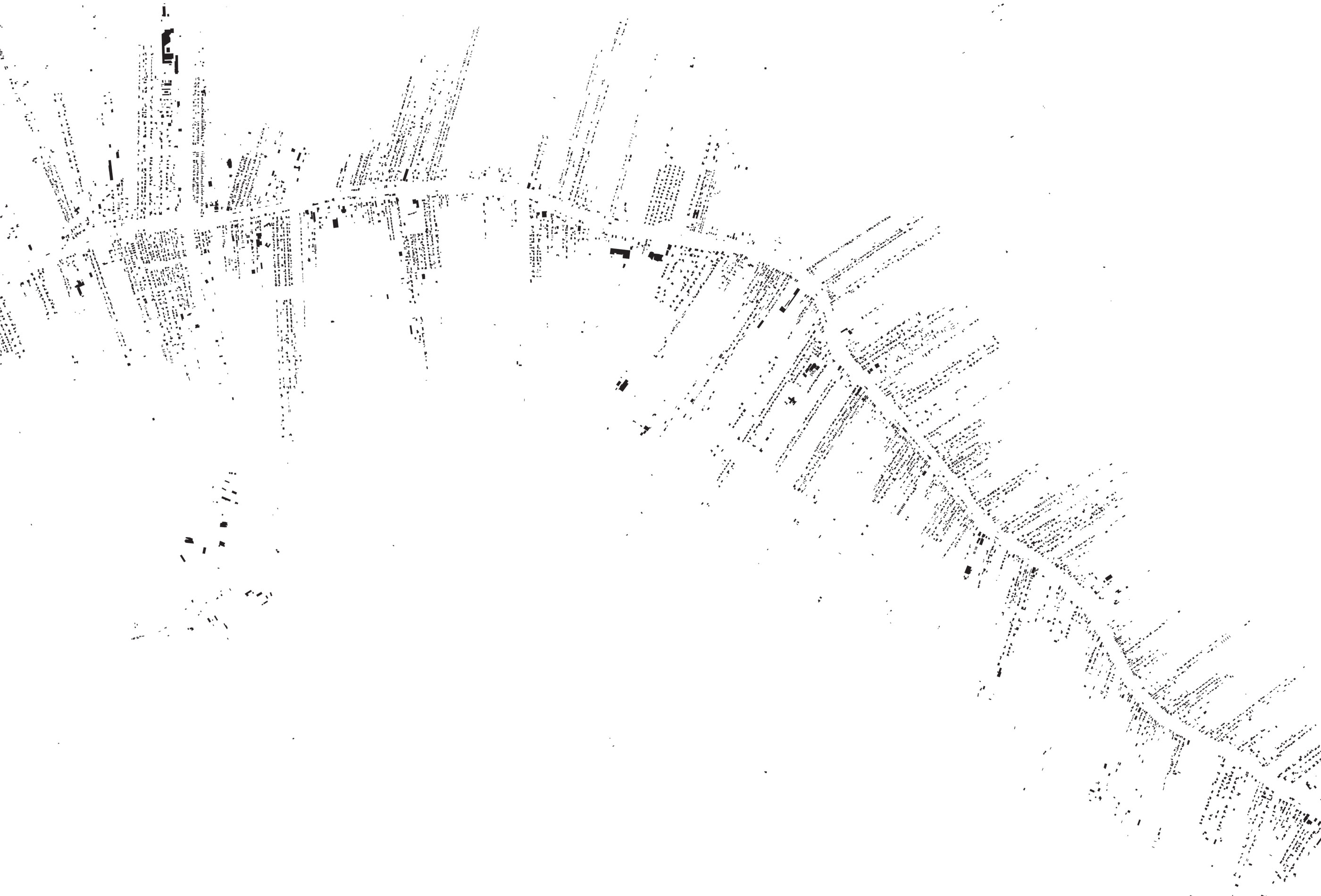 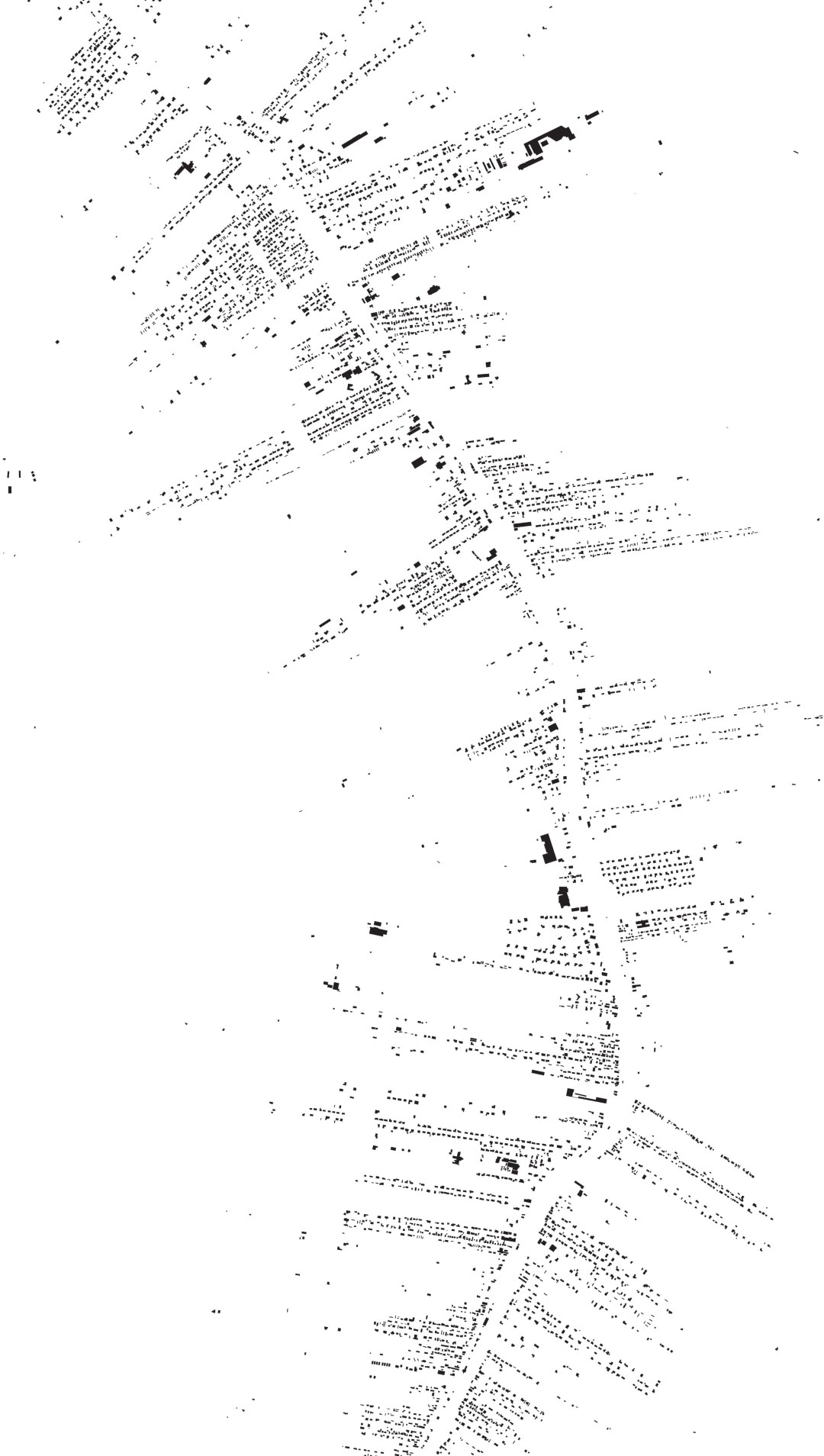 Mesa, Ariz. America’s suburban streets twist and flow, with their wild involutions and curving cul-de-sacs. Mesa’s suburbs are especially imaginative, particularly from above. The feeling of meandering through a place whose layout is designed to thwart speed and comprehension is familiar to anyone who, in the days before GPS, needed to pick up a friend or deliver a pizza in an unfamiliar neighborhood.

Washington, D.C. Many cities evolve over time, but some are designed from scratch. Unmistakably, Washington is a designed city. Its initial layout was the brainchild of Pierre Charles L’Enfant. The city’s characteristic grid, cut through with diagonal paths joined by connecting squares and parks, confounds tourists and newcomers even today. 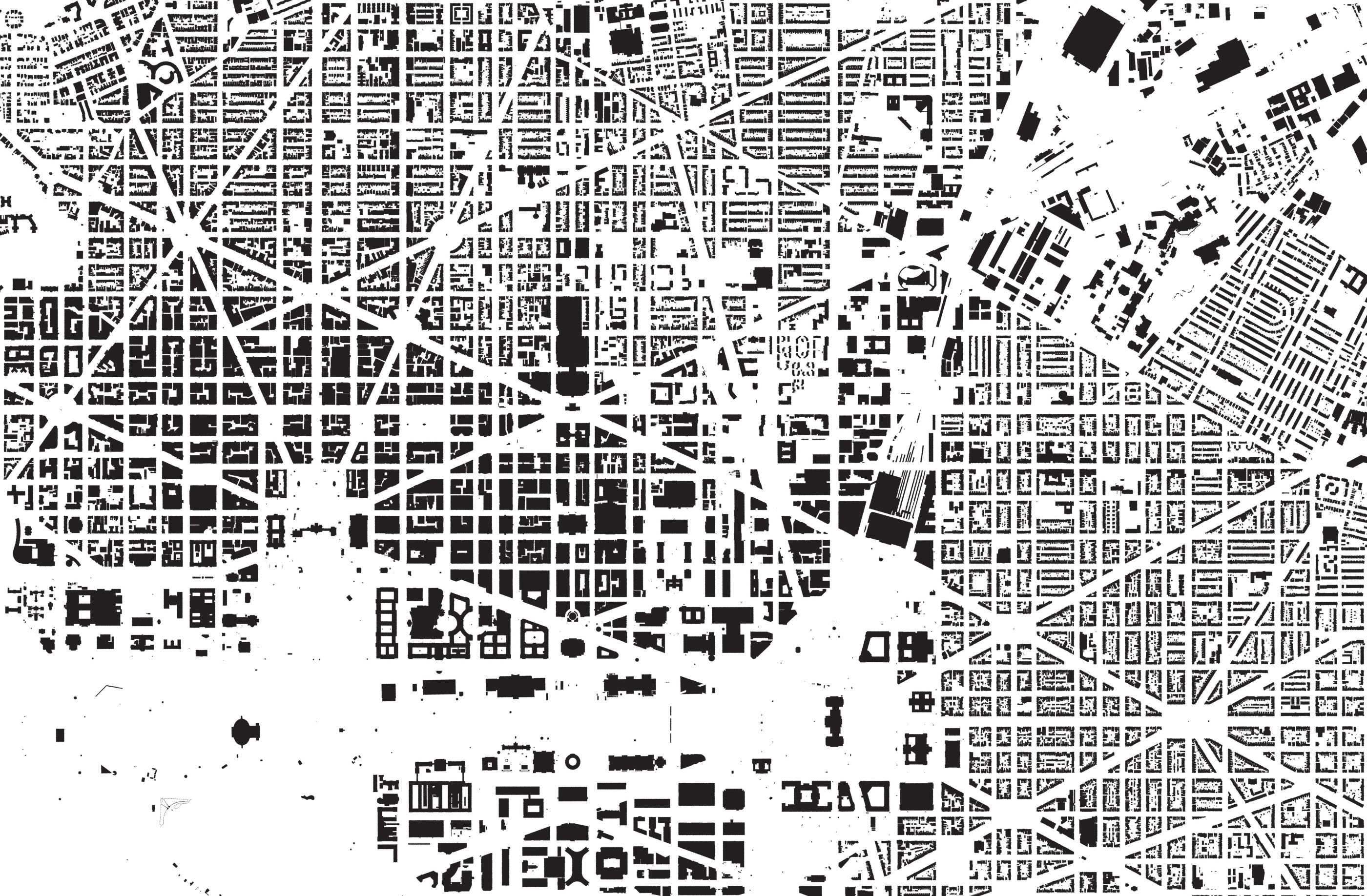 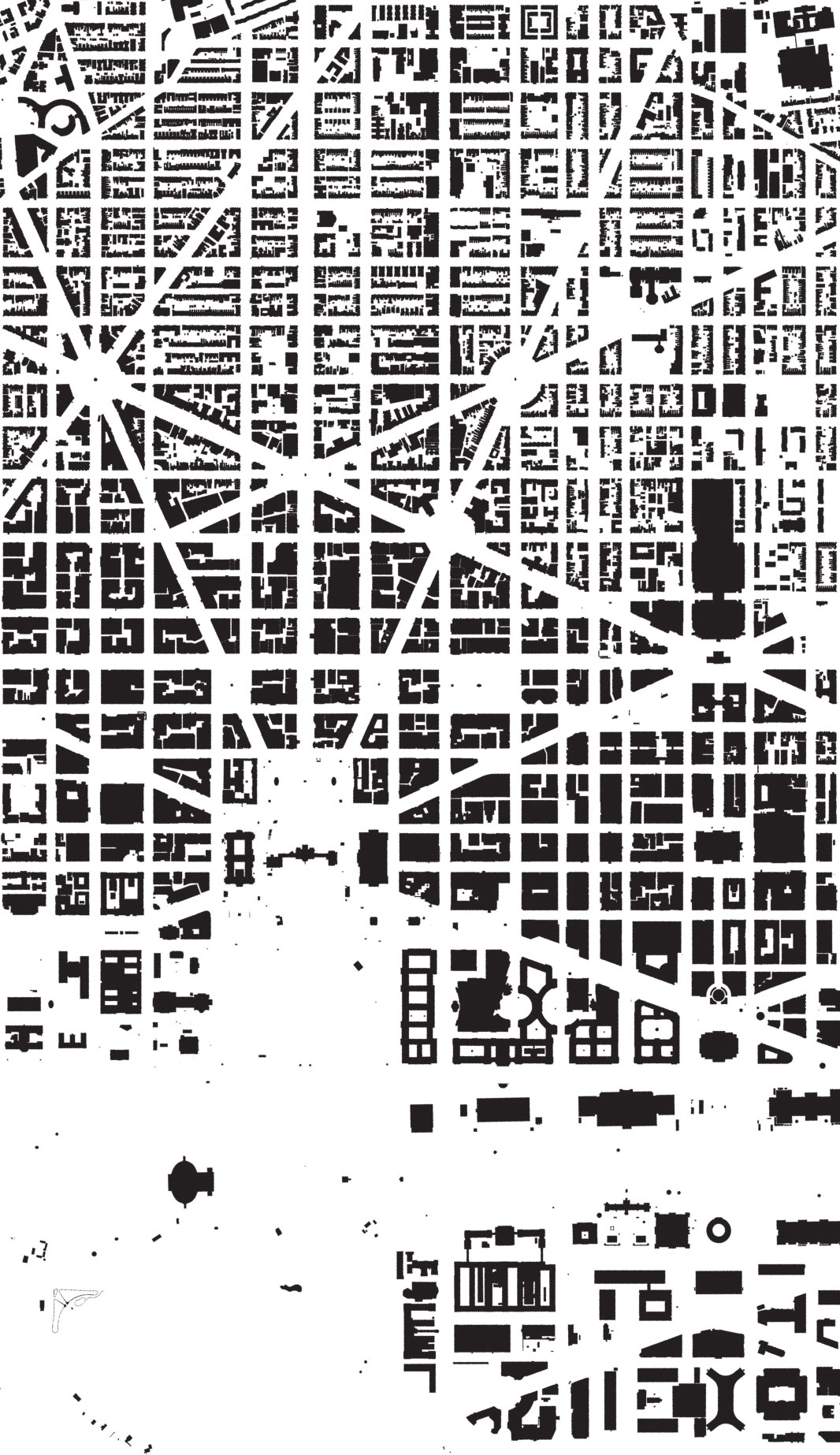 Near Flint, Mich. In many parts of the country, we live on a grid: a checkerboard that can be traced to Thomas Jefferson’s ideas. He wanted to plan the development of lands taken from Native Americans. The regular network of squares, a half-mile to a side, transformed the wildness of the ancient lands into a landscape as regular as a page of graph paper — and which can be discerned from space. 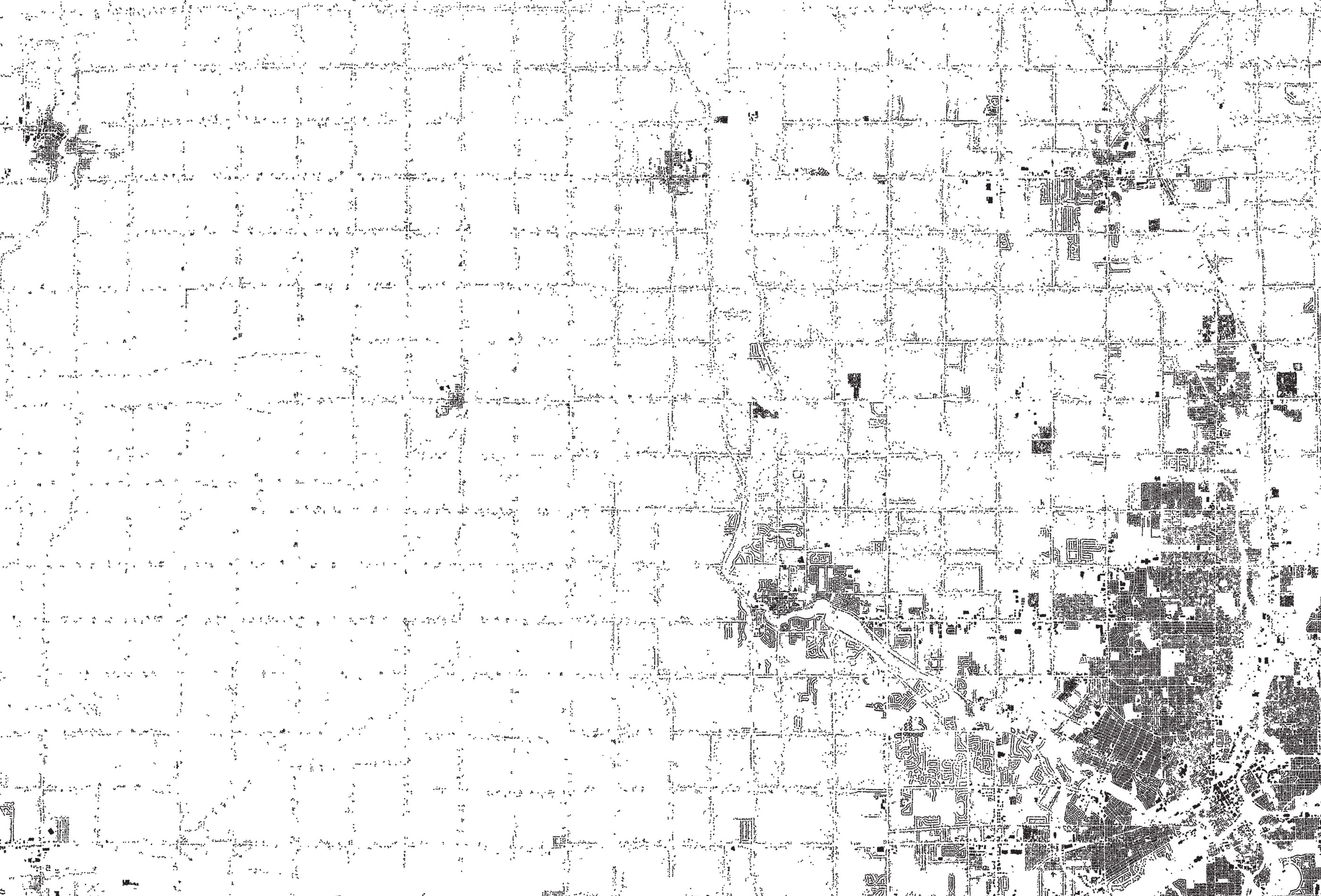 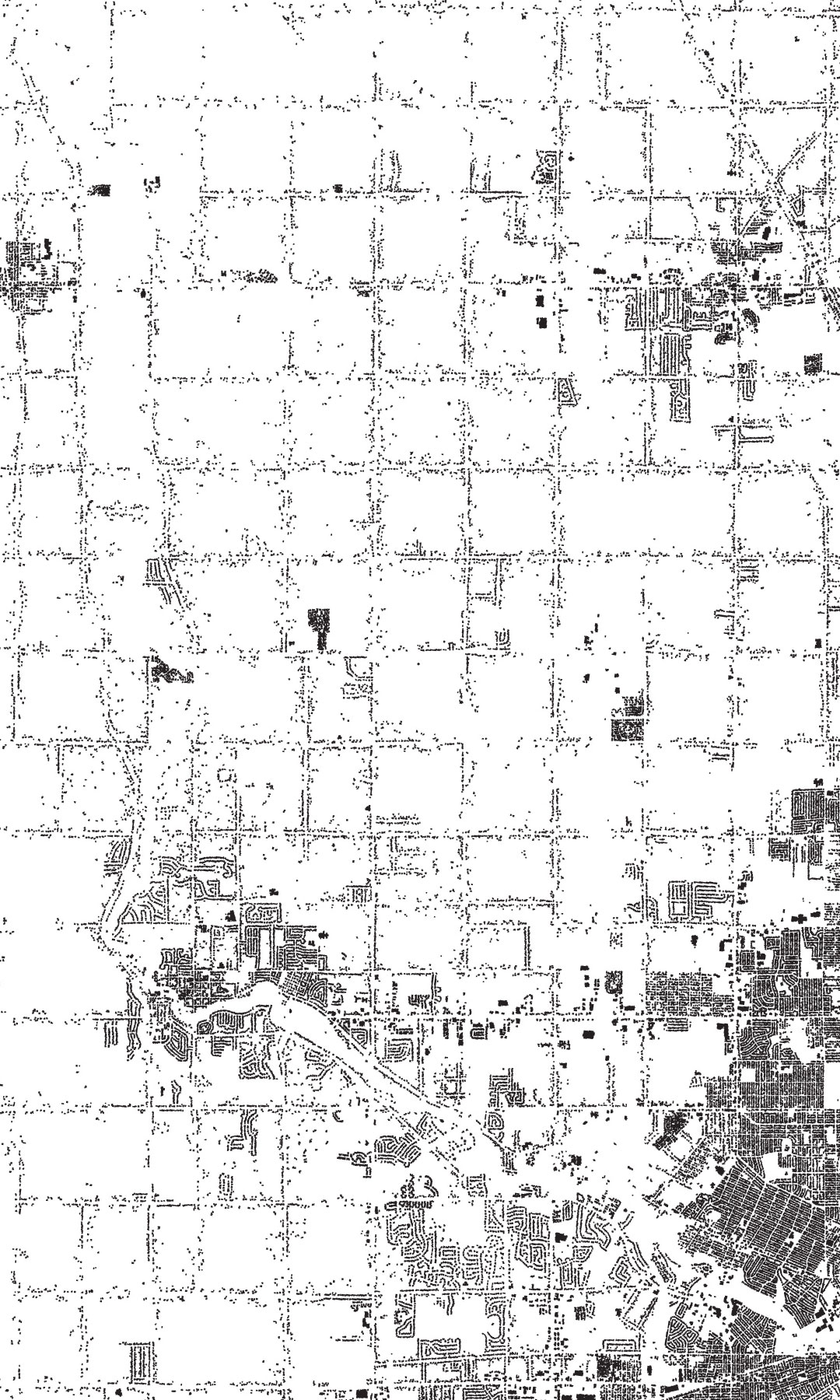 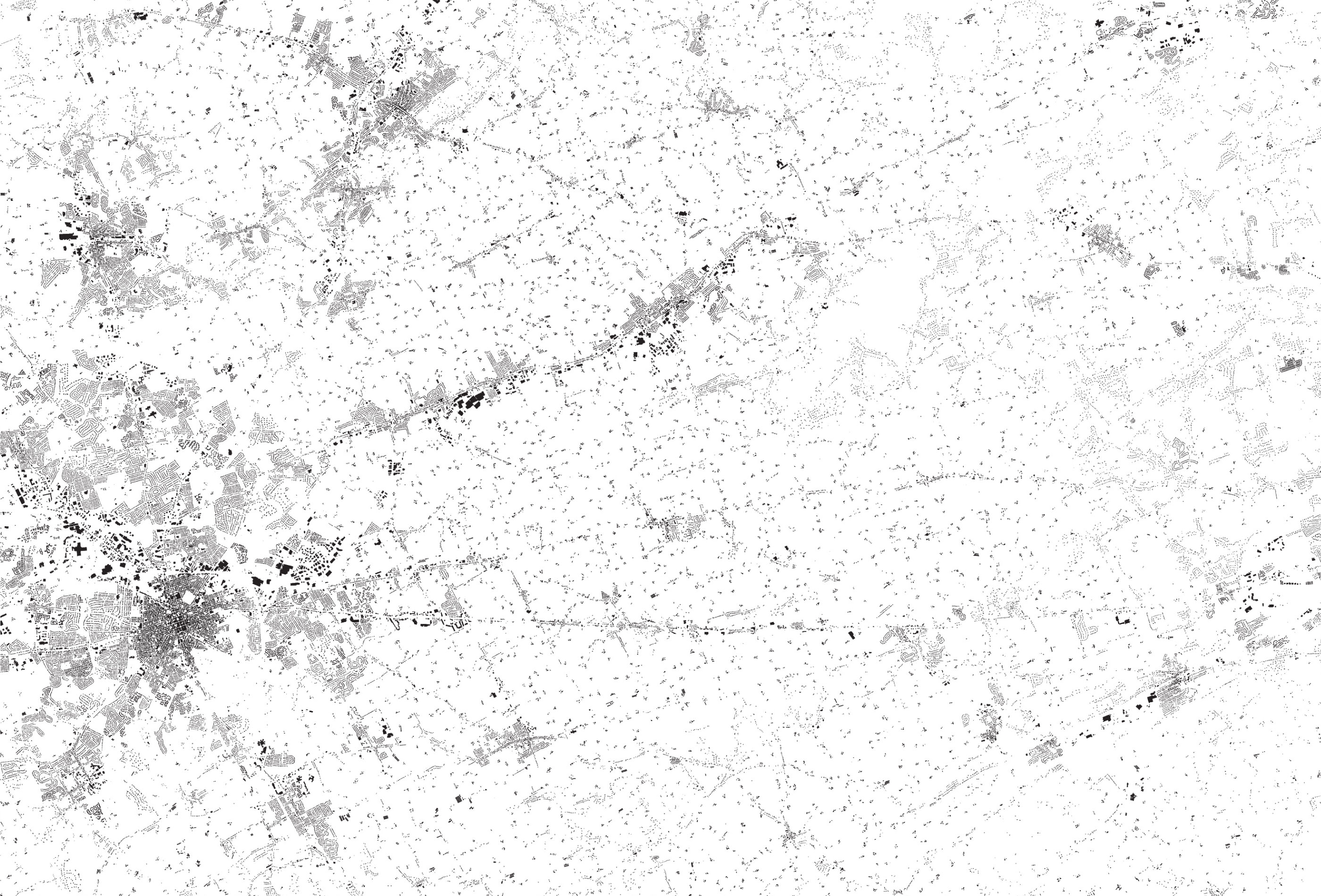 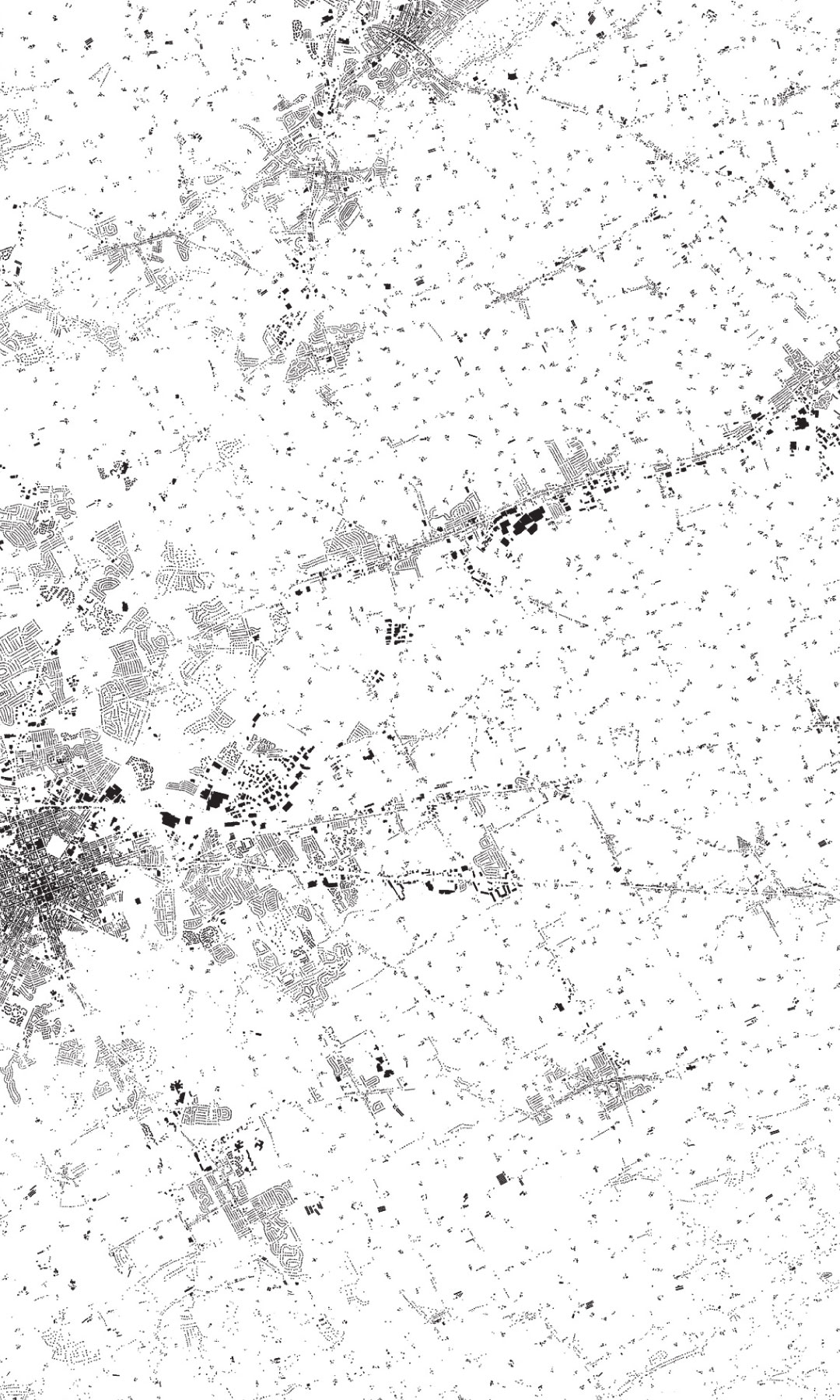