NVIDIA Broadcast App Out Now! Turn Any Room Into A Home Studio On GeForce RTX GPUs

The world of live streaming has expanded rapidly this year: Twitch has seen an 89% increase in the number of streamers, while viewership is up 56%. And mainstream celebrities from all walks of life are getting in on the action, too, from Terry Crews to Post Malone, to Logic.

With the GeForce RTX 20 Series, we introduced an updated NVIDIA Encoder (NVENC) that delivers best-in-class video quality, while offloading work from the CPU to boost framerates in games. We also worked closely with top streaming apps such as OBS, Discord, Streamlabs, Twitch Studio, and XSplit to improve broadcast performance.

While these efforts have improved video encoding quality, this is only one piece of delivering a high quality broadcast — audio quality, camera and room setup are also key to viewers’ enjoyment. Yet, not everyone has the luxury of a dedicated home studio, or can afford expensive cameras, microphones and greenscreens to improve their production quality.

With the launch of GeForce RTX 30 Series GPUs, we’re helping live streamers up their game even further with the new NVIDIA Broadcast app, which is available for download now. It upgrades any room into a home broadcast studio by transforming standard webcams and microphones into smart devices through the power of AI. 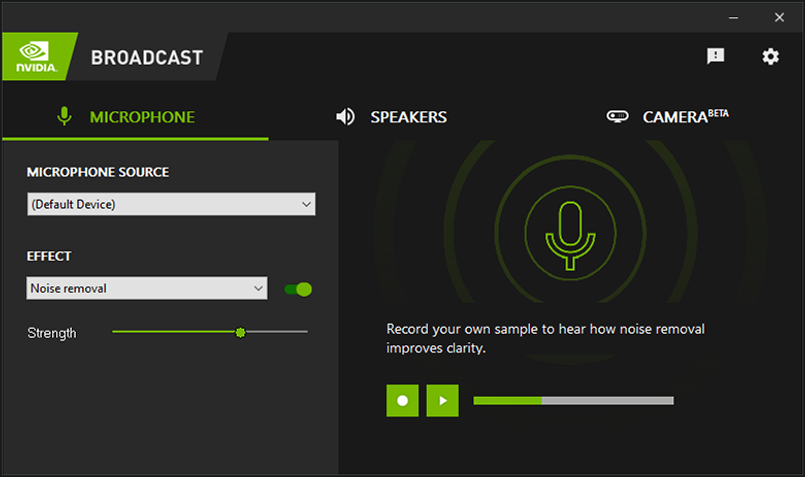 These features can be used beyond game broadcasting as well — from video conferencing at home with Zoom, to gaming with friends on Discord.

NVIDIA Broadcast has been built for and with the community. We received a ton of great feedback on Noise Removal from an early community beta of the feature codenamed RTX Voice. Thanks to the feedback, plus Tensor Core and software optimizations, we’ve materially reduced the performance cost of the AI network while tripling the number of noise profiles supported.

For our new Virtual Background and Auto Frame camera features, we are releasing them as beta so the community can test drive and provide feedback to help improve performance and quality.

For those of you that want to try out the AI noise removal capabilities but aren’t ready to upgrade to an RTX GPU yet, we have also patched RTX Voice with support for NVIDIA GeForce GTX GPUs. Though, of course, your mileage may vary on older cards.

Our new GeForce RTX 30 Series GPUs combine the industry’s best hardware encoder with NVIDIA Broadcast AI-accelerated voice and video effects that help you stream like a pro. Download the NVIDIA Broadcast app here, and follow the setup guide for your favorite applications.