How to Attract a Killer Tigress? Try a Man’s Cologne

The Indian authorities are about to find out.

For the past six months, forest rangers in a wet and bushy patch of central India have been chasing a cunning female tiger suspected of killing 13 people.

They have thrown just about everything they have at the tigress: hundreds of foot soldiers to comb the jungle, bulldozers to clear it, sharpshooters, jeeps, camera traps, a thermal imagery drone and five Indian elephants in hopes of surrounding the tiger so the veterinarians riding the elephants can dart her.

So the rangers plan to deploy a new weapon: a bottle of Calvin Klein Obsession cologne.

“I know, it’s really funny,” said Sunil Limaye, one of the top forestry officials directing the tiger hunt. “But what are we going to do?”

This fragrance for men includes civetone, a compound originally derived from the scent glands of a civet though now often made synthetically. Obsession has been billed as irresistible to women. But because of the civetone, it is also scientifically proven to make wild cats go gaga. They roll around it, they take huge sniffs, they luxuriate in the smell for several minutes.

“Whatever is in that, cats love it,” a cat expert in Australia told Scientific American. “They just seem to be in absolute heaven.”

Call it outside-the-box thinking. Or just pure desperation. But India is going to need some fresh ideas if its tiger population continues to shoot up, as it has been.

In the past decade, India’s tiger count has soared to 2,500, the world’s largest tiger population. At the same time, India, just after China, has the world’s second-largest human population, at 1.3 billion, and the people and tigers are getting squeezed together.

Endangered tigers are spilling out of dedicated reserves, roaming around thinning patches of forest and trotting through farms. Surrounded on all sides by villages, highways, industry and towns, the tigers are increasingly running into humans. 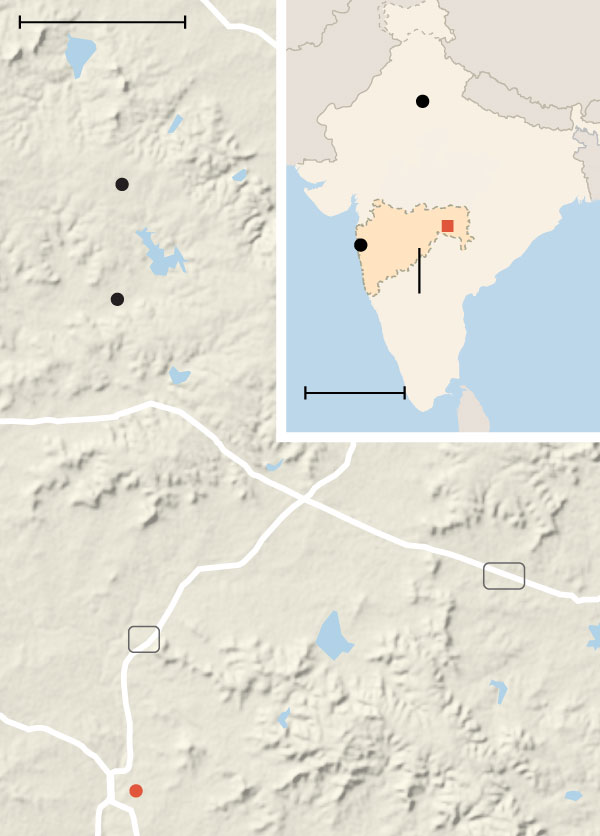 This is what happened to the tigress, whom wildlife officials call T-1. She lives in a fragmented forest near the town of Pandharkawada, in the middle of India.

She has dragged away several villagers by the neck. On some of her victims, she and her two cubs have devoured large chunks of their flesh. Villagers are panicked, avoiding their fields and locking their doors at night, which they never used to do.

Tiger experts in India say they can’t remember a recent tiger ordeal as intense as this. The case has risen all the way to the Supreme Court.

Last month, after a spirited dispute between state authorities and wildlife activists about the fate of T-1, the Supreme Court judges handed down what was essentially a life sentence: The rangers should try their best to capture T-1 to transplant her to a refuge center or a zoo.

But if that fails, the judges ruled, then T-1 can be killed.

Every morning at sunrise, dozens of state forestry guards and police officers trudge out of a makeshift camp carrying AK-47s, tranquilizer guns, GPS locaters, water bottles and foil containers of rice and lentils (their lunch). All day they fight their way through scratchy mazes of lantana bushes that smell sharp and peppery.

They check more than 100 camera traps. They search for tiger hairs and study the stony, undulating terrain for tiger tracks, known as pugmarks.

At dusk they return, sweaty and exhausted. They line up to guzzle water and gobble down jalebi, an Indian snack of fried dough slathered in sticky syrup. Their reports stack up on a plastic table. In the boxes for observations or sightings, the answers are all the same:

In the past few months, T-1 has been spotted only a few times, for just a few seconds. The rangers have sacrificed several horses to draw her out. She’s ripped into them, eaten fast, then vanished. Earlier this year, the rangers managed to dart her once but the dart didn’t stick and she slipped away.

Tranquilizer darts are notoriously difficult to use. About 10 inches long with a feather on the back, they look like a flying syringe. They must be fired at close range, usually no more than 80 feet away.

“It’s going to be impossible to tranquilize her,” said Nawab Shafat Ali Khan, one of India’s most famous hunters, who has killed dozens of elephants and tigers that went, in his words, “rogue.” “She has learned from all these botched capture operations. We’ve made her very smart. Brilliant, actually.”

He said it was highly unusual for a tiger to turn into a man-eater. But there is little traditional prey, like deer, left around Pandharkawada. Once a tiger encounters a person and kills, it may develop a taste for human flesh, which, Mr. Khan says, is sweeter than other animal meat because of all the ginger, salt and spices people consume.

He said that T-1 had learned how easy it is to kill a person, and that she had now gone “psycho.”

As the unsuccessful capture operations drag on, the frustrations grow. So do the dangers. Last week, in the middle of the night, one of the search-and-capture elephants broke its chain and escaped from the rangers’ camp.

At 7 a.m., the rangers received a distress call from 10 miles away. The elephant was rampaging through a village, smashing fences. It grabbed one woman with its trunk and slammed her to the ground, repeatedly.

“Nobody came to help her,” said Nageshwar Chandekar, a friend. “Everyone was too scared.”

After killing her, the elephant stomped off to another village, where it head-butted a man walking down the road, leaving him with a deep gash in his forehead, dazed but alive.

Finally, with the help of a mahout, a traditional elephant trainer, the rangers captured the escaped pachyderm. It was still dragging its enormous steel chain.

“That was the tipping point,” said A.K. Mishra, the chief wildlife officer in the area. Too many lives have been lost, he said, and the capture operation “cannot go on indefinitely.”

The strategy now is to locate T-1 and try to tranquilize her, but if she is too far away, forestry officials said, then a sharpshooter should finish her off. They hope to tranquilize the cubs.

The rangers plan to spray the cologne near the camera traps to lure T-1 to a place where they can surround her.

“It’s a game of wait and watch,” said Mr. Limaye, the forestry official. “At present we are on the receiving end.”

As night fell, he stood on the porch of a ranger station, surrounded by bush.

Nearby, in the thickening gloom, sat a steel box.

It was a tiger cage, big, green, rusty and empty.

A version of this article appears in print on , on Page A4 of the New York edition with the headline: How to Lure a Tigress? Try a Killer Cologne. Order Reprints | Today’s Paper | Subscribe