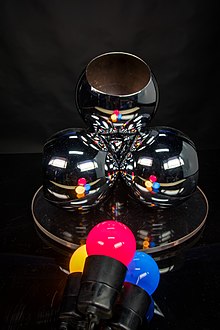 Object representing the Lake of Wada 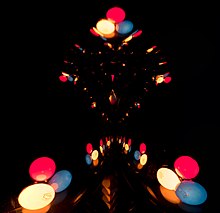 Representation of Lake of Wada

In mathematics, the lakes of Wada (和田の湖, Wada no mizuumi) are three disjoint connected open sets of the plane or open unit square with the counterintuitive property that they all have the same boundary.

More than two sets with the same boundary are said to have the Wada property; examples include Wada basins in dynamical systems.

Construction of the lakes of Wada

First five stages of the Lakes of Wada

The Lakes of Wada are formed by starting with a closed unit square of dry land, and then digging 3 lakes according to the following rule:

After an infinite number of days, the three lakes are still disjoint connected open sets, and the remaining dry land is the boundary of each of the 3 lakes.

For example, the first five days might be (see the image on the right):

Wada basins of attraction for z3 − 1 = 0; all three disconnected open basins have the same boundary

Wada basins are certain special basins of attraction studied in the mathematics of non-linear systems. A basin having the property that every neighborhood of every point on the boundary of that basin intersects at least three basins is called a Wada basin, or said to have the Wada property. Unlike the Lakes of Wada, Wada basins are often disconnected.

An example of Wada basins is given by the Newton–Raphson method applied to a cubic polynomial with distinct roots, such as z3 − 1; see the picture.

A physical system that demonstrates Wada basins is the pattern of reflections between three spheres in contact—see chaotic scattering.