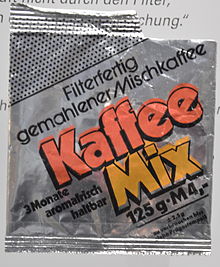 The East German coffee crisis refers to shortages of coffee in the late-1970s in East Germany.

In 1977, East Germany experienced difficulties meeting domestic demand for coffee, a commodity that had to be purchased using "Westgeld", or freely convertible Western currencies, in short supply in Eastern Bloc countries. The coffee crisis indirectly led to changes in the world market for coffee. The coffee crisis led to a reorientation of East German foreign policy[1] as well as considerable belt-tightening.[2] In particular, the East German government engaged in barter with Third World countries, exporting weapons and trucks in exchange for coffee and energy.[3]

In the Soviet occupation zone, much like the rest of Europe after World War II, coffee was a scarce good. The first coffee imported into East Germany came from the Soviet Union. When these imports stopped in 1954, this led to the first mass shortages and intensified efforts to acquire foreign currency with which to purchase coffee. Beginning in 1957, roasted coffee was produced under the brand name Röstfein (de). By the 1970s, coffee was one of the most important items in an East German household budget, although gifts from friends and relatives in the West met about 20 percent of the country's coffee needs.[4] Beginning in the 1960s, East Germany was able to reliably provide basic necessities, but luxury and exotic products remained scarce.[5] This led to increased demand for the available luxury goods, such as confections, tobacco, alcoholic beverages, and coffee (3.6 kilograms (7.9 lb) annually per capita) in the 1970s. East German citizens spent an average of 3.3 billion East German marks for coffee per year, an amount comparable to expenditures on furniture and twice the amount spent on shoes.[6]

The coffee crisis began in 1976. The price of coffee rose dramatically after a failed harvest in Brazil, forcing the East German government to spend approximately 700 million West German Marks on coffee (approximately US$300 million, equivalent to $1.21 billion today), nearly five times the expected DM 150 million per year.[7] The Socialist Unity Party leadership restricted the importation of food and luxury goods, while trying to gather sufficient foreign currency reserves to import petroleum.[8] This occurred against the backdrop of the 1970s energy crisis, as the effects of the 1973 oil shock only began to affect East Germany in the mid-1970s.[9]

The suggestion to cease coffee production, put forward by Alexander Schalck-Golodkowski was able to be avoided after Central Committee member Werner Lamberz encouraged barter trades and armament sales[10] with Third World countries, such as Ethiopia. The cheapest variety of coffee, "Kosta", was discontinued and only more expensive varieties were available.[11] Other alternatives, such as "Kaffee-Mix", a 50 percent mixture of genuine and ersatz coffee, but rationing was not required. The Kaffee-Mix was pejoratively referred to as "Erichs Krönung", a reference to Erich Honecker, leader of East Germany, and the West German Jacobs Krönung coffee brand. The East German government assumed that much of the population would acquire coffee from Westpakete sent by West German relatives. This increased the demand for the typical return gift, a Dresdner Stollen, which also caused difficulties in the East German economy, because many of the ingredients, such as almonds, raisins, and succade, were also only available as imported goods. Alexander Schalck-Golodkowski's suggestion of a ban on gifting Stollen was unsuccessful.[12]

The citizens of East Germany[13] overwhelmingly rejected the Kaffee-Mix and saw the coffee shortage as an attack on a major consumer need that was a large part of everyday life. The coffee mix also damaged some coffee machines, as the mixture contained substitute ingredients such as pea flour, which contains proteins that swell under heat and pressure, clogging the filters.[14] This led to numerous complaints and outraged reactions and protests.[15] Even though the price of coffee on international markets retreated and normalized in 1978,[16] the problems acquiring foreign currency continued into the 1980s in East Germany, causing shortages that damaged the image of the country's political leadership. It is estimated that 20-25 percent of the entire East German coffee consumption from 1975-1977 arrived from the West in care packages.[12] Coffee attained a value as a symbol of inner-German unity, far above its role as a consumer good or commodity.[17]

In West Germany, the coffee price increases in 1977 did not lead to any shortages, but did lead to the adoption of cheaper varieties of coffee in the lower price segment.[12] Coffee brands such as Tchibo and later Eduscho began to make forays into cross-selling, by offering coffee as well as non-food items. These changes can also be attributed to the effects of the coffee crisis on West Germany.[12]

Influence on coffee production in Vietnam

The relationship between East Germany and Vietnam were exceptionally close.[18] Coffee production began in Vietnam in 1926 during French colonial rule.[19] Beginning in 1975, largely parallel with the coffee crisis in East Germany, the production of Robusta coffee began in Vietnam. Robusta plants grow faster, contain more caffeine, suit the climate of the Vietnamese Central Highlands, and lend themselves better to mechanized harvesting. Compared to Arabica, Robusta coffee is cheaper and lower quality.

In the years 1980 and 1986, two treaties were signed between East Germany and Vietnam, whereby East Germany provided the necessary equipment and machinery for production, increased the area of coffee plantation from 600 hectares (1,500 acres) to 8,600 hectares (21,000 acres), and trained the local population in cultivation techniques.[19] In particular, East Germany provided trucks, machinery, and irrigation systems for the newly founded Kombinat Viet-Duc, as well as well as spending approximately US$20 million on a hydropower plant.[19] East Germany also built housing, hospitals, and shops for the 10,000 people who were relocated to the area for coffee production. Against this investment, East Germany was scheduled to receive half of the coffee harvest for the next 20 years.[19] However, coffee takes eight years from planting until the first usable harvest, which occurred in 1990.[20]

Vietnam was quickly able to establish themselves after 1990 as the second-largest coffee producer in the world after Brazil, driving much of the traditional coffee production in Africa out of the market. In particular, this was helped with the re-establishment of trade relations between the U.S. and Vietnam. This overproduction led to a crash in worldwide coffee prices in 2001. In 2016, Germany still was the largest export destination for Vietnamese coffee.[21]