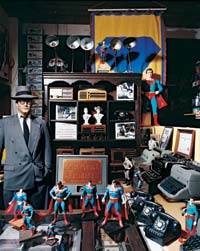 William James Sidis was perhaps the most famous child prodigy in American history. He spelled out words by the time he was a year old, read The New York Times at 18 months, spoke Latin and Greek by age 3. At 11, he enrolled at Harvard; at 16, he was hired as a professor of mathematics at what was then Rice Institute, in Houston. As an adult, though, he became fanatical about his privacy and would work only menial jobs. He died in 1944, at age 46.

I remember, as a child of 7 or 8, reading about Sidis and feeling awed—and perhaps a bit threatened—by his accomplishments. (The only personal accomplishment I could cite at that point was the parachute I’d made using brown grocery-store bags. It looked nice but didn’t work very well.) As amazing as Sidis’s entire tale was, though, there was one detail that sparked my imagination most of all: in his later years he devoted most of his free time and energy to one overwhelming passion—his collection of streetcar transfers.

Aha! I thought. This great child prodigy and I are, in fact, very much alike. After all, I was a collector, too—of both coins (a passion of mine that has, sadly, faded into oblivion in the decades since then) and antique radios (a passion that has, sadly, only intensified over the same decades). And yet, I couldn’t help but wonder: streetcar transfers? Why on earth would anyone bother collecting those?

Welcome to the world of collecting, where irrationality reigns supreme.

Not the most rational of opinions for a young collector to conjure, but then: welcome to the world of collecting, where irrationality reigns supreme. It could even be said that collecting is, itself, an irrational act. Why would any rational person want to have a bunch of stamps sitting around that he or she is never going to use? Coins that will never be spent? Radios that take up much more space than, and don’t work nearly as well as, something you could buy almost anywhere for a few dollars? Old seltzer bottles that will never again hold seltzer? Faded maps that are hopelessly out of date? Phonographs that won’t play 45s or LPs, much less CDs? Books so old you would never dare open and read them, lest they crumble to dust in your hands? Confederate paper money—do you have any idea how few stores still accept that?

In the interest of full disclosure, I should point out that I came up with all these examples just by looking around the living room of my small New York City apartment.

Still, I will not attempt to defend collecting. It needs no defense. Collecting is not embattled or beleaguered. Some believe the era of the collector may be passing (I’ll get to that shortly), but for now, at least, the hobby—or habit, or lifestyle, or compulsion, or pathology, or sacred mission—of collecting something, anything, is very much alive.

But why? Why do people collect things, things that they don’t actually need but that command much more than their fair share of space, time, and treasure? That is a question that has both no answer and too many answers to count. Scientists have posited the existence of a “collecting gene”; as someone who grew up in a family where everyone collects, I can see the merit in this theory, although it doesn’t explain why such a gene would have evolved in the first place.

Some collectors and armchair anthropologists speculate that collecting is a modern expression of our ancient instinct, as hunter-gatherers, to hunt and gather. It’s an interesting theory, and it certainly has appeal; for some reason, modern, evolved people like to trace certain traits of ours back to primitive forebears, perhaps because that must mean we come by them honestly, or at the very least can’t help ourselves. Yet in the case of collecting, this theory has two major flaws: first, ancient people hunted for and gathered things such as meat and berries and firewood, things they then immediately consumed, as opposed to setting them up on a shelf (or perhaps a low tree branch) and admiring them for a while. And second, not everyone collects.