New York City on Tuesday released more than 1.46 million coronavirus antibody test results, the largest number to date, providing more evidence of how the virus penetrated deeply into some lower-income communities while passing more lightly across affluent parts of the city.

In one ZIP code in Queens, more than 50 percent of people who had gotten tested were found to have antibodies, a strikingly high rate. But no ZIP code south of 96th Street in Manhattan had a positive rate of more than 20 percent.

Across the city, more than 27 percent of those tested had positive antibody results. The borough with the highest rate was the Bronx, at 33 percent. Manhattan had the lowest rate, at 19 percent.

The data is likely to renew discussion about whether some neighborhoods or communities in New York City may be nearing herd immunity — the point at which enough people have immunity that the virus is no longer able to spread widely within a community. 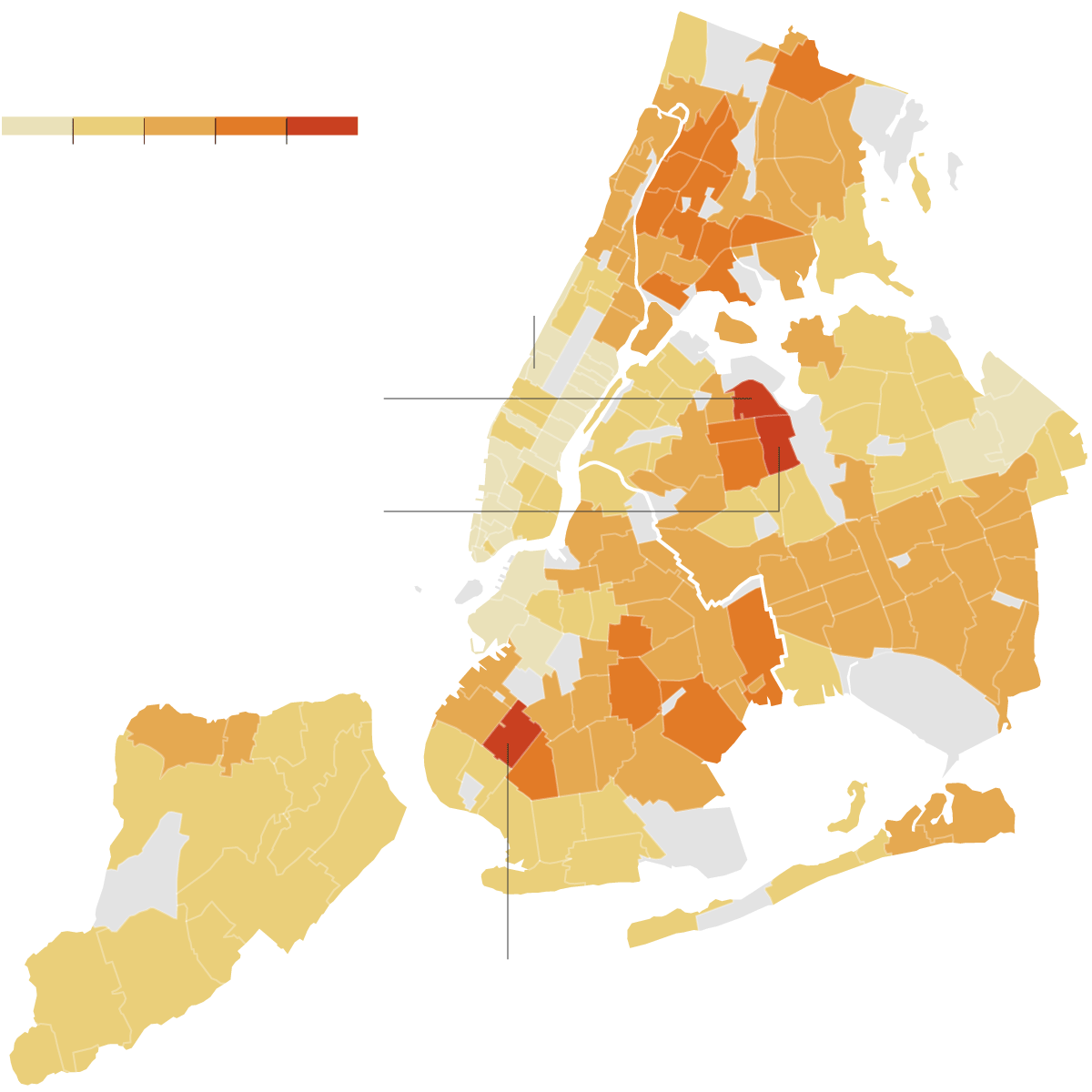 Percent of people tested with Covid-19 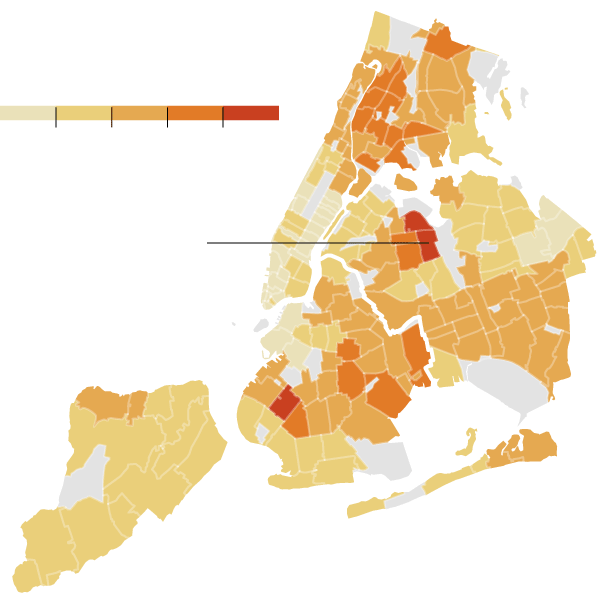 Until now, public data for antibody rates in New York City has been limited. CityMD, which plays a key role in the city’s testing program, had shared some data from its network of urgent care clinics.

Gov. Andrew M. Cuomo’s office had released some details from a survey — which involved testing some 28,419 people across the state — that suggested that roughly 21.6 percent of New York City residents had antibodies.

“This gives us a sense at a deeper level of the magnitude of the penetration of the infection into the population,” said Wafaa El-Sadr, an epidemiology professor at Columbia University.

Here’s what it means:

Much remains unknown about the degree of protection against Covid-19 that antibodies may offer, or how long that protection may last. But the neighborhoods with more residents who were infected at the height of New York’s outbreak in March and April may be less likely to be among the hardest hit during a second wave.

On the other hand, neighborhoods in which few residents have been infected may find themselves more vulnerable in the event of a resurgence.

Some researchers have expressed hope that herd immunity for the new coronavirus may only require about half of the people in a given community to have immunity — while others have suggested a higher threshold, like 70 percent.

Of course, neighborhoods are not sealed off from one another, and even under the most optimistic predictions, most neighborhoods — and millions of New Yorkers — remain vulnerable to infection in a second wave.

Still, the relatively high prevalence of antibodies may partly explain why New York has not seen a significant uptick in cases over the past several months, even as the city has begun to reopen and some New Yorkers have begun to relax their social distancing.

In interviews, epidemiologists have generally expressed surprise and relief at the relatively low rate of new infections in New York City, chalking it up to a variety of measures: widespread use of face coverings, adherence to social distancing recommendations and the continued ban on indoor dining and bars.

“If antibody tests are accurately identifying those who have been infected and if these antibodies are protective, are some communities in N.Y.C. close to achieving herd immunity, like Corona in Queens, for example,” Professor El-Sadr wrote in an email. “That is an intriguing thought.”

The results released on Tuesday showed that 51.6 percent of people who got tested in one ZIP code in Corona had tested positive for antibodies.

The New York City health commissioner, Dr. Dave Chokshi, warned against drawing too many conclusions from antibody rates since there are still many outstanding questions about immunity.

“Remaining vigilant about precautions like hand washing, distancing, face coverings and staying home if ill is essential to keeping transmission low,” he said.

The hardest hit ZIP code in the city — 11368 — was the one in Corona, a predominantly Hispanic neighborhood with many construction workers and restaurant employees. Many had to work throughout the pandemic, raising their risk of infection.

About 23 percent of residents in the ZIP code have gotten an antibody test.

That part of Queens has an especially high rate of household crowding, which may also partly explain the high positive antibody rate. Experts have said transmission within households is a leading driver of the disease’s spread.

The ZIP code with the second highest rate of positive antibody tests was in the Borough Park neighborhood in South Brooklyn. There, more than 46.8 percent of antibody tests were positive.

Borough Park is home to many Hasidic Jews, a particularly hard-hit demographic. Large households are common, and the tight-knit, communal way of life was likely also a factor. Many Hasidic Jews fell sick in early March, right after Purim — a holiday of joyous celebration, full of parties and mingling.

The lowest rate — 12.4 percent — came from a tiny ZIP code in Queens, consisting of just a couple of blocks of waterfront in Long Island City. The next lowest rates were in Manhattan, where in several ZIP codes fewer than 13 percent of people tested had antibodies. The lowest Manhattan rates — 12.6 percent — occurred in one ZIP code on the Upper East Side and another on the Upper West Side.

In Brooklyn, the ZIP code with the lowest rate of positive antibody tests — 13.2 percent — includes much of Park Slope, a wealthy and predominantly white neighborhood.

Among various age groups, those 17 and under were the most likely to have antibodies, with 32.6 percent of their tests coming back positive.

The age results also were not separated by neighborhoods.

People aged 45 to 64 were more likely to have a positive antibody rate (28 percent) than adults in other age cohorts.

A higher percentage of men (28 percent) tested positive for antibodies than women (25 percent).

The data did not include a breakdown by race or ethnicity. Other data has shown that Black and Hispanic New Yorkers have significantly higher rates — when adjusted for age — of being hospitalized or dying of Covid-19 than white people.

The accuracy of antibody testing varies widely. Moreover, most antibody tests were done for people seeking them out, which means that those who got tested are a self-selecting group and not a random sample.

It also appears that New Yorkers in some neighborhoods with lower infection rates were more likely to seek antibody testing.

In some wealthy and largely white ZIP codes in Manhattan, some 30 percent of people may have gotten an antibody test. But in Corona, for instance, where the positive rate was highest, less than a quarter of people got tested.