Twitter suspended me for tweeting feminist academic research. Here’s why that’s a problem.

This morning, I did what I always, lamentably, do, which is wake up and check Twitter. I noticed that the account for MIT, where I work as an admissions officer and research affiliate, had tweeted a story about Math Prize for Girls, an annual competition, hosted on campus last weekend, for women with an affinity for STEM.

I’m a longtime fan and supporter of Math Prize. In fact, I had spoken at the competition, giving a talk about applying to MIT (and colleges in general) as a mathematically inclined women. As part of that talk, I mentioned that research has shown the gendering of science to be a historical, not a natural, phenomenon. As Professor Maria Charles wrote in one of my favorite reviews of the relevant literature:

But representations of scientific and technical fields as by nature masculine aren’t well-supported by international data. They’re also difficult to reconcile with historical evidence pointing to long-term historical shifts in the gender-labeling of some STEM fields. In The Science Education of American Girls, Kim Tolley reports that it was girls who were overrepresented among students of physics, astronomy, chemistry, and natural science in 19th century American schools. Middle-class boys dominated the higher-status classical humanities programs thought to require top rational powers and required for university admission. Science education was regarded as excellent preparation for motherhood, social work, and teaching.

I retweeted the story by MIT News and followed it up with a tweet of my own, which read:

and embedded a screenshot of the above block-quote from the essay by Professor Charles. I then went to eat breakfast and run a half-marathon.

After I finished, ate some oranges, and drank some water, I opened my phone and checked Twitter again. This time, however, I saw this: 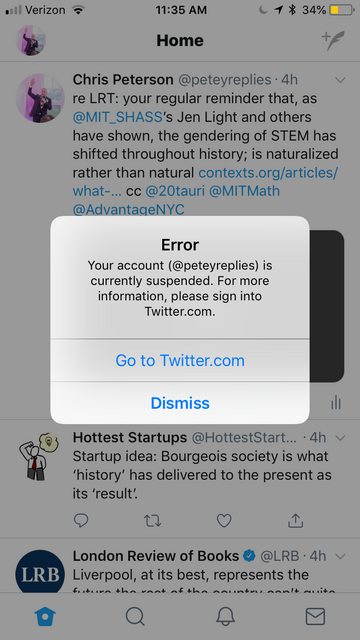 When I went to Twitter on my desktop, I saw a red banner saying that my account has been suspended. I was not given an option to review or delete a tweet, and my Twitter account is authenticated (though not verified) to my phone number and other personal information. I’ve never had an issue with Twitter before: this was my first strike, so to speak.

As instructed, I filed an appeal, explaining that I had been tweeting about research and was confused why I was suspended. The confirmation message said that they would likely get back to me in a few days. A short while later, I received an email that said my account was suspended for violating the Twitter rules:

I’m not sure how my post triggered these rules, but I am guessing that I ran afoul of Twitter’s newly-announced policy against “dehumanizing speech.” As Wired wrote:

The policy will prohibit “content that dehumanizes others based on their membership in an identifiable group, even when the material does not include a direct target.” It expands upon Twitter’s existing hateful conduct policy prohibiting users from threatening violence or directly attacking a specific individual on the basis of characteristics such as race, sexual orientation, or gender. Twitter’s users, especially women and minority groups, long have complained that the company’s rules have been ineffective and inconsistent in addressing harassment and abuse.

Twitter didn’t tell me that I violated this policy specifically, but I can’t see another rule that I could have possibly broken with this tweet. I can also see how my tweet might have triggered a very, very naive rule that saw “gender,” “STEM,” and “natural” in close proximity, or interpreted the text on the screenshot (which now shows up as a grey box) as denigrating women as a class, when the substance of the message was doing the opposite.

I want to emphasize that I support the goals of this policy. I’m on the Board of the National Coalition Against Censorship, a 501(c)(3) civil liberties group dedicated to fighting for the freedom of people to think, create, and speak. As a graduate student at MIT, I wrote my thesis on how people manipulate social media to suppress speech. I care a lot about giving people agency to express themselves.

However, at recent board meetings, I’ve been advocating for us, and other civil liberties organizations with whom we work, to relax our historic hard-line stance against social media intermediaries implementing any kind of steps to make their speech environments less toxic. I am deeply sympathetic to the arguments made by people, particularly members of historically subaltern groups, that a space where “anything goes” reproduces preexisting power dynamics, and prevents members of these groups from participating on equal terms.

However, I also believe that the implementation of these policies and processes can’t be this dumb. I get that this is a really, really hard social and technical problem to solve. But any system that (apparently) flags feminist academic research about the social construction of scientific privilege as being abusive of women as a class is just not ready for production. And any such system, especially one as poorly designed as this, that keeps the reasons for disciplinary actions opaque, and obscures/delays the process of appealing an account to invisible moderators often working rapidly in inhumane conditions, does not meet the standard we must demand for the most powerful speech intermediaries in the world.

Look: I won’t be harmed by a few hours or days without a Twitter account. In fact, in the current political environment, it might be an unexpected benefit, in the same way getting sick before my race forced me to taper more kept me from hurting myself. But I’m posting this because, as someone (again) who is super-sympathetic to what Twitter is trying to do, this is completely bonkers.

And, in the long run, we have to hold our speech intermediaries to a high standard, even (especially) as we try to give them the space to design and cultivate more equitable environments for everyone to tell their stories. If we don’t, then we’re going to face the impossible choice between the free speech nihilism of “anything goes” or the capricious censorship of arbitrary algorithms. We can’t afford to accept either outcome.