The tall poppy syndrome describes aspects of a culture where people of high status are resented, attacked, cut down, strung up or criticised because they have been classified as superior to their peers. The term has been used in cultures of the English-speaking world.[1][2][3][4][5] 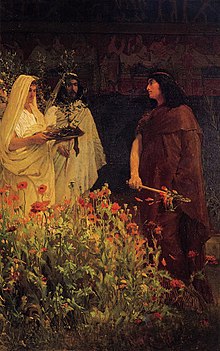 Tarquinius Superbus by Lawrence Alma-Tadema, depicting the king receiving a laurel wreath; the poppies in the foreground refer to the "tall poppy" allegory

[Periander] had sent a herald to Thrasybulus and inquired in what way he would best and most safely govern his city. Thrasybulus led the man who had come from Periander outside the town, and entered into a sown field. As he walked through the wheat, continually asking why the messenger had come to him from Cypselus, he kept cutting off all the tallest ears of wheat which he could see, and throwing them away, until he had destroyed the best and richest part of the crop. Then, after passing through the place and speaking no word of counsel, he sent the herald away. When the herald returned to Cypselus, Periander desired to hear what counsel he brought, but the man said that Thrasybulus had given him none. The herald added that it was a strange man to whom he had been sent, a madman and a destroyer of his own possessions, telling Periander what he had seen Thrasybulus do. Periander, however, understood what had been done, and perceived that Thrasybulus had counselled him to slay those of his townsmen who were outstanding in influence or ability; with that he began to deal with his citizens in an evil manner.

Aristotle uses Herodotus' story in his Politics (1284a)[6] with reversed roles, referring to Periander's advice to Thrasybulus via a herald.

The story is that Periander made no reply to the herald sent to ask his advice, but levelled the corn-field by plucking off the ears that stood out above the rest; and consequently, although the herald did not know the reason for what was going on, when he carried back news of what had occurred, Thrasybulus understood that he was to destroy the outstanding citizens.

The specific reference to poppies occurs in Livy's account of the tyrannical Roman king, Lucius Tarquinius Superbus. He is said to have received a messenger from his son Sextus Tarquinius asking what he should do next in Gabii, since he had become all-powerful there. Rather than answering the messenger verbally, Tarquin went into his garden, took a stick, and symbolically swept it across his garden, thus cutting off the heads of the tallest poppies that were growing there. The messenger, tired of waiting for an answer, returned to Gabii and told Sextus what he had seen. Sextus realised that his father wished him to put to death all of the most eminent people of Gabii, which he then did.[7]

The earliest English-language example of Tall Poppies being used as a metaphor for notables[citation needed] may be found in Roger L'Estrange's newspaper, The Observator, in 1710. One party to a dialogue relates the tale of Tarquin, and later observes approvingly of his Royalist allies, "If you'll have but a little Patience, you may see them make very noble Efforts towards striking off the Heads of the tall Poppies."[8]

By 1835, the metaphor had crossed the Atlantic to the United States,[clarification needed (see talk)] where the Torch Light of Hagerstown, Maryland, observed of then-Congressman Francis Thomas, "Politically, Mr. Thomas and his friends are imitating the example of Tarquin and Sextius – indeed it is said some of the tall poppies of our county are in danger of decapitation."[9]

There is a similar legend about the king Ramiro II of Aragon, which asked for some advice to his old master to deal with some nobles who questioned his power. His master did not say anything but just cut the heads of the tallest roses in the garden. This legend is known as the "Bell of Huesca".

The phrase can be found as early as 1864 in a controversy over the awarding of a knighthood:

It is more difficult to find a similar recommendation for such a dignity as the Order of the Garter. But then it derives a collateral value from the fact that it is always given either to people of singular distinction, or else to men whose social position is sufficient to make them formidable to the Minister of the day. It is a kind of public proclamation that you are a tall poppy and that, as in these days your head cannot be struck off, it is worth while to buy you.[10]

Again in 1904 in a report of a debate in the Federal Parliament:

Senator. O'Keefe– He regarded the appointment of a High Commissioner as necessary.

Unquestionably one of the evils of Government in Australia and Britain is the appalling cost of administration, from the tall poppy at £3,000 per annum to the toiler at £260.[12]

The phrase has been in more common use since Jack Lang, Premier of New South Wales, described his egalitarian policies as "cutting the heads off tall poppies" in 1931. "Mr. Lang made some of the tall poppies suffer who could be made to suffer."[13] "The tall poppies of the party had dragged Mr. Lang's name into the debate to cloud the issue."[14]

The phrase experienced a revival with the publication of Susan Mitchell's best-selling book Tall Poppies in 1984 in which Mitchell interviewed nine successful Australian women.[15]

Of the Australian definition, Peter Hartcher of the Sydney Morning Herald writes, "(Australian) citizens know that some among them will have more power and money than others... But according to the unspoken national ethos, no Australian is permitted to assume that he or she is better than any other Australian. How is this enforced? By the prompt corrective of levelling derision. It has a name—The "Tall Poppy Syndrome". The tallest flowers in the field will be cut down to the same size as all the others. This is sometimes misunderstood... It isn't success that offends Australians. It's the affront committed by anyone who starts to put on superior airs."[citation needed]

Prior to becoming British Prime Minister, Margaret Thatcher explained her philosophy to an American audience as "let your poppies grow tall," although it was reported she added under her breath, "unless of course they are from the worker's unions."[16][clarification needed]

The quote was made in the United States for political purposes and any assertion that the United Kingdom itself has a culture of tall poppy syndrome in the crab mentality sense like Australia and New Zealand[17] has been disputed.[18]

Belief in the strength of this cultural phenomenon, and the degree to which it represents a negative trait, is to some extent influenced by politics. Tall poppy syndrome is related to what some call "the politics of envy".[citation needed]

Some commentators[who?] have argued that tall poppy syndrome is a universal phenomenon, that is more common in some cultures. The concepts of janteloven or "Law of Jante", in Scandinavia, and A kent yer faither (English: I knew your father) in Scotland, are very similar. Similar phenomena are said to exist in the Netherlands (where it is called maaiveldcultuur). In the United States, Benjamin Franklin Fairless, president of United States Steel Corporation (1950), criticised such behaviour when he stated: "You cannot strengthen one by weakening another; and you cannot add to the stature of a dwarf by cutting off the leg of a giant".[19]

Some sociologists, notably Max Weber, believe that in certain social groups, the acquisition of prestige and power is a zero-sum game, and this situation may provide a rationalisation for the dislike of "tall poppies".[20] In such groups, there is only a limited amount of prestige for its members to share in and only a fixed quantity of attention, authority and material resources that its members can give to each other. Status is a relative value, so for someone to rise in status, another person must fall. A person who is more prestigious is an obstacle to another person's rise simply by being more prestigious, and a person who suddenly rises is an outright threat to the other's current status. Humiliating or sabotaging a popular member of the group will lower that person's status and thus make it possible for the aggressor to supplant him in the group hierarchy.

This zero-sum pattern can be found in small groups characterised by fixed hierarchies and where there is little movement in or out of the group. Examples include poor American communities and some street gangs.[21][22] A related concept is that of a crab mentality in which successful members of a disadvantaged community are seen as undermining the standing of other community members. The image is drawn from the observation that a crab clawing its way out of a bucket (or barrel in other versions) is pulled back down by its fellows.[citation needed]

Recent research performed at University of Waikato in New Zealand shows that a culture of tall poppy syndrome may result in a reduction in average performance of up to 20% for an organisation and explains how electronic cyberbullying can be considered a modern extension to the physical assassinations of King Tarquin's day.[17]