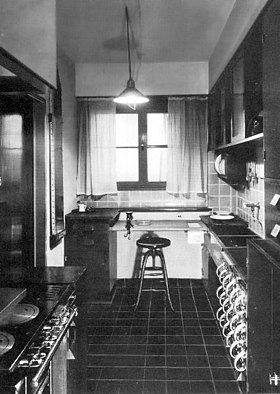 The Frankfurt kitchen (view from the entrance) 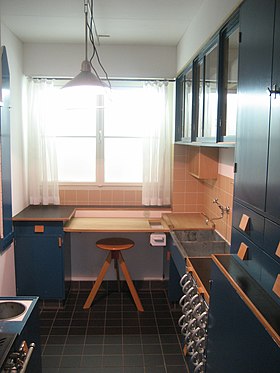 The reconstruction shown at MAK Vienna

The Frankfurt kitchen was a milestone in domestic architecture, considered the forerunner of modern fitted kitchens, for it realised for the first time a kitchen built after a unified concept, designed to enable efficient work and to be built at low cost. It was designed in 1926 by Austrian architect Margarete Schütte-Lihotzky for architect Ernst May's social housing project New Frankfurt in Frankfurt, Germany.[1] Some 10,000 units were built in the late 1920s in Frankfurt.

German cities after the end of World War I were plagued by a serious housing shortage. Various social housing projects were built in the 1920s to increase the number of rental apartments. These large-scale projects had to provide affordable apartments for a great number of typical working class families and thus were subject to tight budget constraints. As a consequence, the apartments designed were comfortable but not spacious, and so the architects sought to reduce costs by applying one design for large numbers of apartments.

Margarete Schütte-Lihotzky's design of the kitchen for the Römerstadt thus had to solve the problem of how to build many kitchens, without allowing it to occupy too much of the total space of the apartment. Her design departed from the then common kitchen-cum-living room. The typical worker's household lived in a two-room apartment, in which the kitchen served many functions at once: besides cooking, one dined, lived, bathed, and even slept there, while the second room, intended as the parlour, often was reserved for special occasions such as a rare Sunday dinner. Instead, Schütte-Lihotzky's kitchen was a small separate room, connected to the living room by a sliding door; thus separating the functions of work (cooking etc.) from those of living and relaxing, consistent with her view about life:

"Firstly, it [life] is work, and secondly it is relaxing, company, pleasures."

Schütte-Lihotzky's design was strongly influenced by the ideas of Taylorism, which was in vogue at the beginning of the 20th century. Started by Catharine Beecher in the middle of the 19th century and reinforced by Christine Frederick's publications in the 1910s, the growing trend that called for viewing household work as a true profession had the logical consequence that the industrial optimisation pioneered by Taylorism spilled over into the domestic area. Frederick's The New Housekeeping, which argued for rationalising the work in the kitchen using a Taylorist approach, had been translated into German under the title Die rationelle Haushaltsführung in 1922. These ideas were received well in Germany and Austria and formed the base of German architect Erna Meyer's work and were also instrumental in Schütte-Lihotzky's design of the Frankfurt kitchen. She did detailed time-motion studies to determine how long each processing step in the kitchen took, re-designed and optimised workflows, and planned her kitchen design such that it should optimally support these workflows. Improving the ergonomics of the kitchen and rationalising the kitchen work was important to her:

"The problem of rationalising the housewife's work is equally important to all classes of the society. Both the middle-class women, who often work without any help [i.e. without servants] in their homes, and also the women of the worker class, who often have to work in other jobs, are overworked to the point that their stress is bound to have serious consequences for public health at large."

This quote succinctly sums up the reasons for the appeal of Taylorism at the time. On the one hand, the trend to rationalise the household was reinforced by the intention to reduce the time spent in (economically speaking) "unproductive" housework, so that women had more time for factory work. On the other hand, emancipatory efforts to improve women's status, also in the home, called for rationalisation to relieve women and enable them to pursue other interests.

Schütte-Lihotzky was strongly inspired by the extremely space-constrained railway dining car kitchens, which she saw as a Taylorist ideal: even though these were very small, two people could prepare and serve the meals for about 100 guests, and then wash and store the dishes. 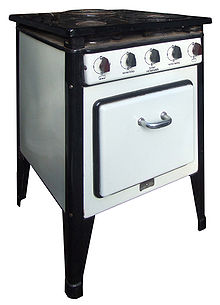 The Frankfurt kitchen was a narrow double-file kitchen measuring 1.9 m × 3.4 m (6.2 ft × 11.2 ft).[2] The entrance was located in one of the short walls, opposite which was the window. Along the left side, the stove was placed, followed by a sliding door connecting the kitchen to the dining and living room. On the right wall were cabinets and the sink, in front of the window a workspace. There was no refrigerator, but there was a foldable ironing board visible in the image folded against the left wall.

The narrow layout of the kitchen was not due solely to the space constraints mentioned above, it was equally a conscious design decision in a Taylorist attempt to minimise the number of steps needed when working in the kitchen. The sliding door also helped minimise the walking distance between the kitchen and the table in the adjacent room.

Dedicated, labelled storage bins for common ingredients such as flour, sugar, rice and others were intended to keep the kitchen tidy and well-organised; the workspace had an integrated, removable "waste drawer" such that scraps could just be shoved into it while working and the whole thing emptied at once afterwards.

Because conventional kitchen furniture of the time fit neither the new workflows nor the narrow space, the Frankfurt kitchen was installed complete with furniture and major appliances such as the stove, a novelty at that time in Germany. It was the first fitted kitchen. The wooden door and drawer fronts were painted blue because researchers had found that flies avoided blue surfaces. Lihotzky used oak wood for flour containers, because it repelled mealworms, and beech for table tops because beech is resistant to staining, acids, and knifemarks. The seating was a revolving stool on castors for maximum flexibility.

Schütte-Lihotzky actually designed three different variations of the Frankfurt kitchen. Type 1, the one described here, was the most common and least costly. She also designed "Type 2" and "Type 3", which were larger, had tables, and were spacious enough for one or even two additional persons to help in the kitchen. These two latter types, however, did not have the impact her "Type 1" model had.

Erna Meyer responded to the criticisms of the Frankfurt kitchen with her Stuttgart kitchen, presented in 1927. It was slightly larger and had a more square ground plan, and used unit furniture in an attempt to make it adaptable to both the future users' needs and different room shapes.

Schütte-Lihotzky's Frankfurt kitchen was installed in some 10,000 units in Frankfurt and as such was a commercial success. The cost of a single kitchen, fully equipped, was moderate (a few hundred Reichsmark); the costs were passed on to the rent (which reportedly increased the rents by 1 RM per month).

However, the users of these kitchens often had their difficulties with them. Unaccustomed to Schütte-Lihotzky's custom-designed workflows for which the kitchen was optimised, they often were at loss as to how to use the kitchen. It was frequently described as not flexible enough—the dedicated storage bins often were used for other things than their labels said. Another problem with these bins was that they were easily reachable by small children. Schütte-Lihotzky had designed the kitchen for one adult person only, children or even a second adult had not entered the picture, and in fact, the kitchen was too small for two people to work in. Most contemporary criticism concentrated on such rather technical aspects. Nevertheless, the Frankfurt kitchen became a model for a modern work kitchen. For the rest of the 20th century, the small, rationalised work kitchen was a standard in tenement buildings throughout Europe.

Sociological aspects of the "work kitchen" were criticised only much later, in the 1970s and 80s, when feminist criticism found that the emancipatory intentions that had in part motivated the development of the work kitchen had actually backfired: precisely because of the specialised rationalisation and the small size of these kitchens such that only one person could work comfortably, housewives tended to become isolated from the life in the rest of the house. What had started as an emancipatory attempt (although all proponents such as Beecher, Frederick, or Meyer had always implicitly assumed that the kitchen was the woman's domain) to professionalise and revalue work in the home was now seen as a confinement of the woman to the kitchen. 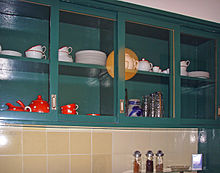 Most Frankfurt kitchens were thrown away in the 1960s and 1970s, when modern kitchens with easy to clean surfaces like Resopal were affordable. Often only the aluminium drawers survived, which aren't typical of a modern kitchen. They were also sold separately for a few years by Haarer, the manufacturing company and chosen by architects and cabinet makers for their furniture.

When the public interest on the work of Margarete Schütte-Lihotzky in the late 1990s was growing, most kitchens did not exist any more. Some homeowners have built replicas; a very few originals still exist. The original house Im Burgfeld 136, Frankfurt was chosen to be a museum because of the surviving Frankfurt kitchen.

In 2005 the Victoria and Albert Museum acquired a "Frankfurt" kitchen for its traveling exhibition "Modernism: Designing a New World" with stops in London, the USA and Germany.[3] The kitchen was dismantled from its original place, restored and repainted.[1]

The Frankfurt kitchen in museums

The Frankfurt kitchen is found in the following public collections: