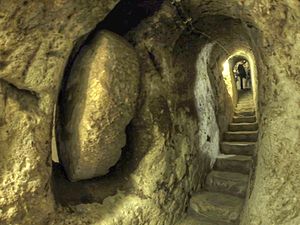 A passage in the Underground City.

The city could accommodate as many as 20,000 people and had all the usual amenities found in other underground complexes[citation needed] across Cappadocia, such as wine and oil presses, stables, cellars, storage rooms, refectories, and chapels. Unique to the Derinkuyu complex and located on the second floor is a spacious room with a barrel vaulted ceiling. It has been reported that this room was used as a religious school and the rooms to the left were studies.[1]

Starting between the third and fourth levels are a series of vertical staircases, all of which eventually lead to a cruciform church on the lowest (fifth) level.[citation needed]

The large 55-metre (180 ft) ventilation shaft appears to have been used as a well. The shaft provided water to both the villagers above and, if the outside world was not accessible, to those in hiding.[citation needed] 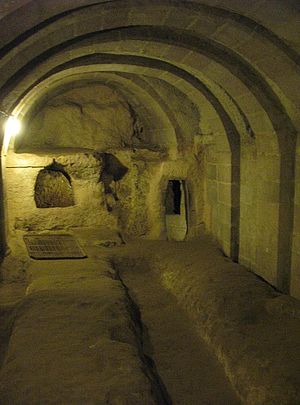 'School' in the Underground City.

Caves might have been built initially in the soft volcanic rock of the Cappadocia region by the Phrygians, an Indo-European people, in the 8th–7th centuries BCE, according to the Turkish Department of Culture.[2][dead link] When the Phrygian language died out in Roman times, replaced with its close relative,[3] the Greek language,[4] the inhabitants, now Christian, expanded their underground caverns to deep multiple level structures adding the chapels and Greek inscriptions.[5]

The city at Derinkuyu was fully formed in the Byzantine era, when it was heavily used as protection from Muslim Arabs during the Arab–Byzantine wars (780-1180).[6][5] The city was connected with other underground cities through many kilometers (miles) of tunnels. Some artifacts discovered in these underground settlements belong to the Middle Byzantine Period, between the 5th and the 10th centuries CE.[citation needed]

These cities continued to be used by the Christian natives as protection from the Mongolian incursions of Timur in the 14th century.[7][8]

After the region fell to the Ottomans, the cities were used as refuges (Cappadocian Greek: καταφύγια) by the natives from the Turkish Muslim rulers.[9]

As late as the 20th century, the local population, Cappadocian Greeks, were still using the underground cities to escape periodic waves of Ottoman persecution.[9] For example, R. M. Dawkins, a Cambridge linguist who conducted research from 1909 to 1911 on the Cappadocian Greek speaking natives in the area, recorded such an event as having occurred in 1909: "When the news came of the recent massacres at Adana, a great part of the population at Axo took refuge in these underground chambers, and for some nights did not venture to sleep above ground."[9]

In 1923, the Christian inhabitants of the region were expelled from Turkey and moved to Greece in the population exchange between Greece and Turkey, whereupon the tunnels were abandoned.[5][10]

In 1963, the tunnels were rediscovered after a resident of the area found a mysterious room behind a wall in his home. Further digging revealed access to the tunnel network.[11]

In 1969, the site was opened to visitors, with about half of the underground city currently accessible.[citation needed]

Nevşehir Province has several other historical underground cities and Derinkuyu connects to Kaymakli via an 8-kilometre (5 mi) tunnel.[citation needed]

The underground cities and structures are carved out of unique geological formations. They may have been used as hiding places during times of raids. The locations are now archaeological tourist attractions. They remain generally unoccupied. More than 200 underground cities of at least two levels have been discovered in the area between Kayseri and Nevsehir. Some 40 of those include three or more levels.[citation needed]