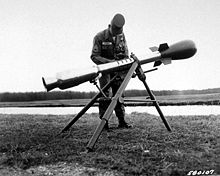 The M-28 or M-29 Davy Crockett Weapon System was the tactical nuclear recoilless gun (smoothbore) for firing the M-388 nuclear projectile that was deployed by the United States during the Cold War. It was one of the smallest nuclear weapon systems ever built, with a yield between 10 and 20 tons TNT equivalent (40–80 gigajoules). It is named after American folk hero, soldier, and congressman Davy Crockett.

US officials view a W54 nuclear warhead, as used on the Davy Crockett. The unusually small size of the warhead is apparent.

The Davy Crockett recoilless spigot gun was developed in the late 1950s for use against Soviet and North Korean armor and troops in case war broke out in Europe or the Korean peninsula. Davy Crockett Sections were assigned to United States Army Europe and Eighth United States Army armor and mechanized and non-mechanized infantry battalions. During alerts to the Inner German border in the Fulda Gap the Davy Crocketts accompanied their battalions. All V Corps (including 3rd Armored Division) combat maneuver battalions had preassigned positions in the Fulda Gap. These were known as GDP (General Defense Plan) positions. The Davy Crockett sections were included in these defensive deployment plans. In addition to the Davy Crocketts (e.g., assigned to the 3rd Armored Division), V Corps had nuclear artillery rounds and Atomic Demolition Mines, and these were also targeted on the Fulda Gap. On the Korean peninsula, units assigned the Davy Crockett weapons primarily planned to use the passes that funneled armor as killing grounds, creating temporarily deadly radioactive zones roadblocked by destroyed tanks and other vehicles.

The M-388 round used a version of the Mk-54 warhead, a very small sub-kiloton fission device. The Mk-54 weighed about 51 lb (23 kg), with a yield equivalent to somewhere between 10 and 20 tons of TNT—close to the minimum practical size for a fission warhead,[1] and comparable in yield to the largest conventional bombs developed at the time.[2] The only selectable feature with either versions of the Davy Crockett (M28 & M29) was the height-of-burst dial on the warhead. Post-Davy Crockett versions of the W54 nuclear device apparently had a selectable yield feature (see below for Hi/Lo Switch and Launching Piston references). The complete round weighed 76 lb (34.5 kg). It was 31 in. (78.7 cm) long with a diameter of 11 in. (28 cm) at its widest point; a subcaliber piston at the back of the shell was inserted into the launcher's barrel for firing.[3] The "piston" was considered a spigot prior to the discharge of the propellant cartridge in the recoilless gun chamber of the Davy Crockett. The M-388 atomic projectile was mounted on the barrel-inserted spigot via bayonet slots. Once the propellant was discharged the spigot became the launching piston for the M-388 atomic projectile. The nuclear yield is hinted at in FM 9-11: Operation and Employment of the Davy Crockett Battlefield Missile, XM-28/29 (June 1963).

The M-388 could be launched from either of two launchers known as the Davy Crockett Weapon System(s): the 4.7-inch (120 mm) M28, with a range of about 1.25 mi (2 km), or the 6.1-in (155 mm) M29, with a range of 2.5 mi (4 km). Both weapons used the same projectile, and were either mounted on a tripod launcher transported by an armored personnel carrier, or they were carried by a Jeep (M-38 & later M-151). The Jeep was equipped with an attached launcher for the M28 or the M29, as required, whereas the Davy Crockett carried by an armored personnel carrier was set up in the field on a tripod away from the carrier. The Davy Crocketts were operated by a three-man crew.[4] In the 3rd Armored Division in Germany in the 1960s many Davy Crockett Sections (all of which were in the Heavy Mortar Platoons, in Headquarters Companies of Infantry or Armor Maneuver Battalions) received what became a mix of M28 & M29 launchers [e.g., one of each per D/C section]. Eventually, the M28s were replaced by M29s, so that both the armored personnel carriers and the Jeeps carried the M29. 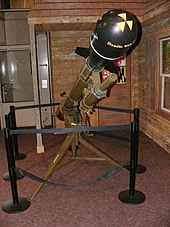 Both recoilless guns proved to have poor accuracy in testing, so the shell's greatest effect would have been its extreme radiation hazard. The M-388 would produce an almost instantly lethal radiation dosage (in excess of 10,000 rem, 100 Sv) within 500 feet (150 m), and a probably fatal dose (around 600 rem, 6 Sv) within a quarter mile (400 m).[5] The weapon did not have an abort function; if fired, the warhead would explode.[6]

Versions of the W54 warhead were also used in the Special Atomic Demolition Munition project and the AIM-26A Falcon.

The 55th and 56th Infantry Platoons, attached to the Division Artillery of the US 82nd Airborne Division, were the last units equipped with the M-29 Davy Crockett weapons system. These two units were parachute deployed and, with a 1/2 ton truck per section (three per platoon), were fully air droppable. The units were deactivated in mid-1968.

One of the most fervent supporters of the Davy Crockett was West Germany's defense minister Franz Josef Strauss, in the late 1950s and early 1960s. Strauss promoted the idea of equipping German brigades with the weapon to be supplied by the US, arguing that this would allow German troops to become a much more effective factor in NATO's defense of Germany against a potential Soviet invasion. He argued that a single Davy Crockett could replace 40–50 salvos of a whole divisional artillery park – allowing the funds and troops normally needed for this artillery to be invested into further troops, or not having to be spent at all. US NATO commanders strongly opposed Strauss's ideas, as they would have made the use of tactical nuclear weapons almost mandatory in case of war, further reducing the ability of NATO to defend itself without resorting to atomic weapons.[10]

The following museums have a Davy Crockett casing in their collection: