When you try to install the Firefox pr Chrome web browser on a recent Windows 10 version 1809 Insider build, you may notice that the installation gets interrupted by the operating system.

The intermediary screen that interrupts the installation states that Edge is installed on the device and that it is safer and faster than the browser that the user was about to install on the device.

Options provided are to open Microsoft Edge or install the other browser anyway. There is also an option to disable the warning type in the future but that leads to the Apps listing of the Settings application and no option to do anything about that. 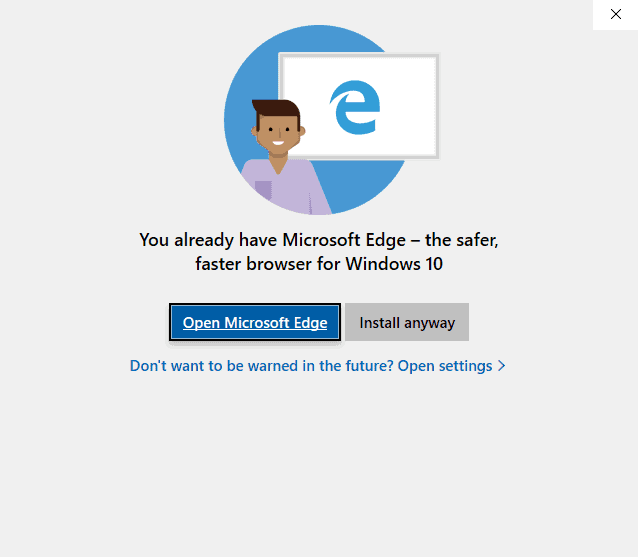 While there is certainly a chance that Microsoft is just testing things in preview versions of Windows, it is equally possible that such a setting will land in the next feature update for Windows 10.

Companies like Google or Microsoft have used their market position in the past to push their own products. Google pushes Chrome on all of its properties when users use different browsers to connect to them, and Microsoft too displayed notifications on the Windows 10 platform to users who used other browsers that Edge was more secure or power friendly.

The intercepting of installers on Windows is a new low, however. A user who initiates the installation of a browser does so on purpose. The prompt that Microsoft displays claims that Edge is safer and faster, and it puts the Open Microsoft Edge button on focus and not the "install anyway" button.

It seems likely that such a prompt would result in higher than usual exits from installation if the intercepting prompt lands in stable versions of Windows.

There is also a chance that Microsoft would push its own products when users attempt to install other products: think a third-party media player, screenshot tool, image editor, or text editor.

While it seems that Microsoft plans to integrate an option to disable these "warnings", it remains to be seen how that will look like. Judging from the current implementation it will be opt-out which means that the intercepting prompts are displayed to all users by default who attempt third-party software installations.

Microsoft Edge is not doing so well despite the fact that it is the default web browser on Windows 10. Microsoft stated in 2017 that Edge usage had doubled but third-party usage tracking service still see the browser lag behind Chrome, Firefox and even Internet Explorer in usage share.

Microsoft has released Edge for Android and the browser has been well received by Android users.

Now You: What is your take on the prompt?