Every Sept. 11, beams of light rise more than four miles into the night sky from the National 9/11 Memorial & Museum in Lower Manhattan to honor the nearly 3,000 lives lost in America’s most devastating terrorist attacks. The glowing columns elegantly trace the outlines of the twin towers. But they also beckon thousands of migrating birds into the city’s skyscraper canyons, where they can become disoriented and crash headlong into buildings.

Since 2005, thanks to efforts by New York City Audubon and the officials and producers of the tribute, this potential danger has largely been eliminated. This success offers lessons for other light-polluted cities across the country. Nationwide, nearly 600 million birds die every year in collisions with buildings, according to the Smithsonian Migratory Bird Center.

Early September is the peak time for the fall migration in New York City. Hundreds of millions of birds pour down from Canada’s boreal forests, winging their way south along the Atlantic Coast toward tropical destinations in the Caribbean, Mexico and Central and South America. These birds fly at night, availing themselves of the typically calmer nocturnal atmosphere to fly more efficiently and to minimize a chance encounter with a hawk or a falcon. They navigate in part by the stars but can become confused by the artificial light from urban areas.

People who watch the tribute up close can see dense flurries of birds circling, swooping and diving in and out of the beams, not unlike the frenzied clouds of insects drawn to a porch light at night. These are no mere porch lights, though, but 88 powerful xenon bulbs, each pumping more than 7,000 watts of bright light high into the night sky in columns that can be seen 60 miles away. And they attract migrating birds — especially warblers — by the thousands.

Over the past decade, as researchers in the emerging field of radar aeroecology, we have studied how the Tribute in Light affects birds. We do this by analyzing radar data from 143 Nexrad weather stations. With the help of cloud computing and artificial intelligence, we can track millions of migrating birds in the night sky as they fly across the continental United States.

Looking specifically at radar data for Lower Manhattan, we found that the Tribute in Light attracted bird densities at up to 150 times their normal levels on seven of nine Sept. 11 nights from 2008 to 2016 when weather conditions allowed for observation. We estimate that those light beams altered the migratory behavior of more than 1.1 million birds over those seven nights, putting them at risk of collision.

So, how to avoid disaster? New York City Audubon has positioned trained volunteers armed with binoculars on the roof of a parking garage in Battery Park City, at the base of the tribute, to monitor aggregations of birds in the tribute light beams. If densities exceed more than 1,000 birds or if a bird is found dead, the lights are shut down to allow the birds to disperse.

For the first few years, weather conditions largely kept migrating birds grounded on Sept. 11. Then, in 2010, the lights were shut off for the first time — five times that night. They were temporarily extinguished in five of the subsequent seven years; in 2015, a record nine times. On radar, we can observe the effect, as a dense swirl of orange and red pixels representing a high density of birds above Wall Street diffuses into cool blue and green ribbons moving southwest. Only two birds — a pine warbler and an American redstart — are known to have died at the tribute since the monitoring program began. 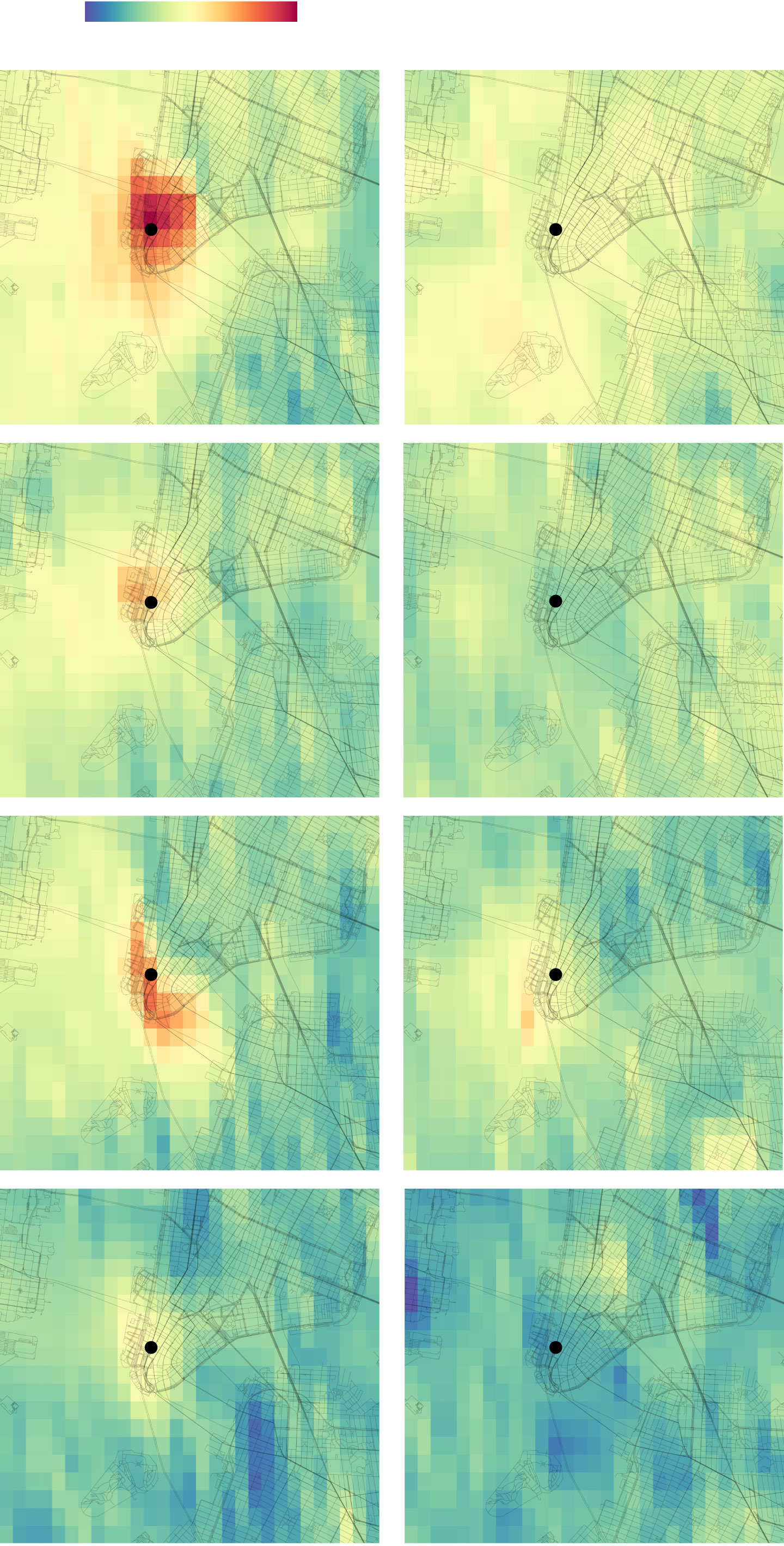 Lights off, about 10 minutes later 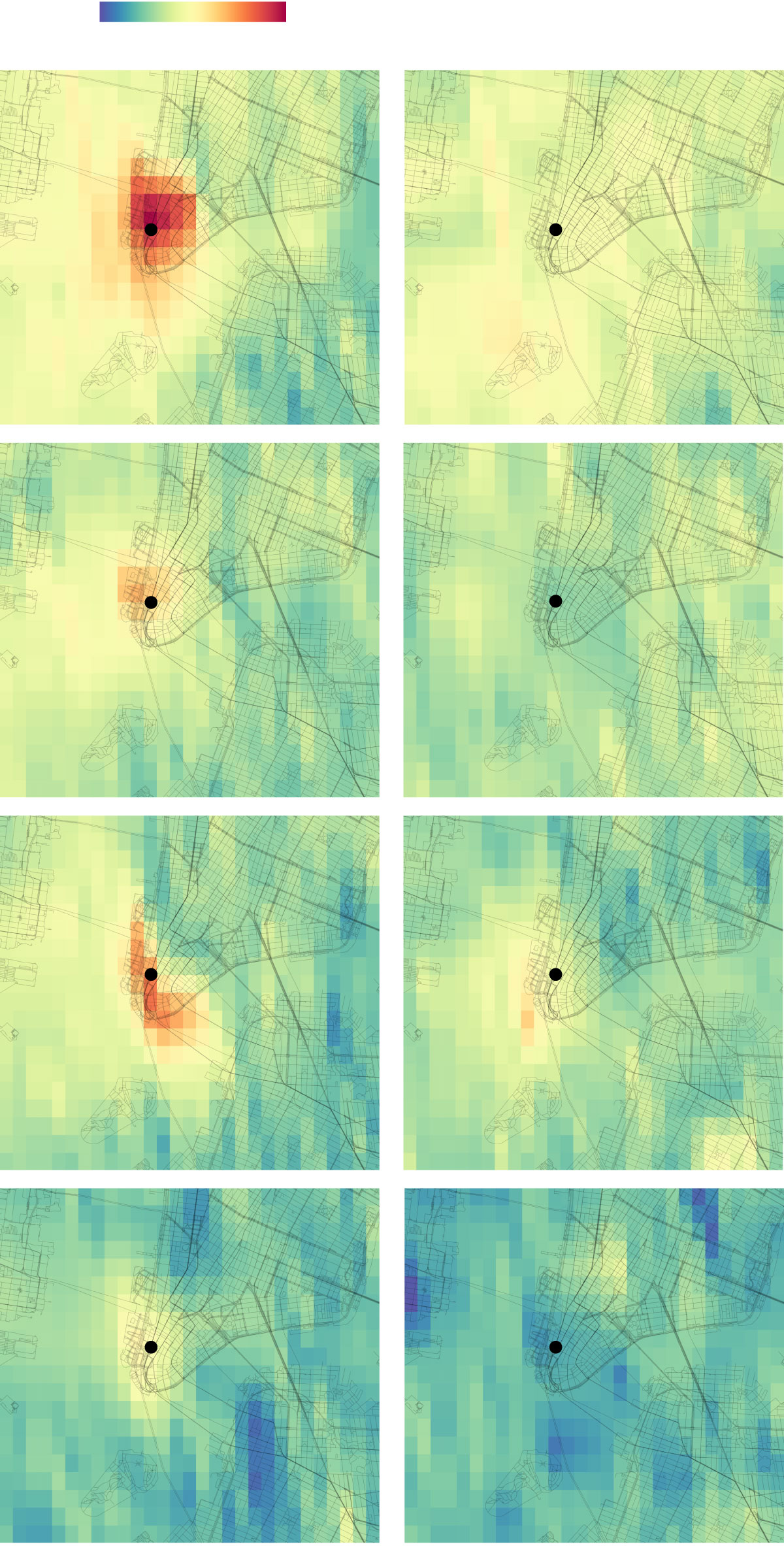 Lights off, about 10 minutes later

Night skies across nearly half the United States are polluted by light. Many of America’s metropolises lie along rivers, coastlines and ridges that concentrate large numbers of migratory birds. Birds lured to these lights face several threats. Some may collide with buildings at night. Others may rest in these unfamiliar urban areas until morning, then take flight and crash into the glass windows of buildings, drawn by reflections of trees or open sky. This happens every migration.

Migratory bird populations in North America are already in steep decline, mostly because of habitat loss. Almost a third of all long-distance migratory birds that breed in the boreal forest are considered to be of high conservation concern, according to the 2016 State of North America’s Birds report, published by the North American Bird Conservation Initiative. Artificial light at night may not be the primary threat to these species but could push some species closer to extinction.

Using historical records, radar and satellite data to monitor the intensity of light pollution, we have identified five cities that pose the highest risks to fall migrants — Chicago, Houston, Dallas, Atlanta and, of course, New York. We also discovered that on average, half of the total passage of autumn bird migration density over the continental United States occurs on fewer than 10 nights. With migration forecasts developed by scientists at the Cornell Lab, the University of Massachusetts at Amherst and Oxford University, these cities and others could determine the optimal nights to dim or extinguish lights so that birds can pass safely. Operators of nighttime illuminated structures, like wind turbines and refineries that emit gas flares, could also take advantage of this information.

As the cooperative bird protection efforts at Tribute in Light have demonstrated, flipping the light switch can make a difference.

Andrew Farnsworth is a research associate and Kyle G. Horton is a postdoctoral fellow at the Cornell Lab of Ornithology.