We recently started restoring a Teletype Model 19, a Navy communication system introduced in the 1940s.14 This Teletype was powered by a bulky DC power supply called the "REC-30 rectifier". The power supply uses special mercury-vapor thyratron tubes, which give off an eerie blue glow in operation, as you can see below. 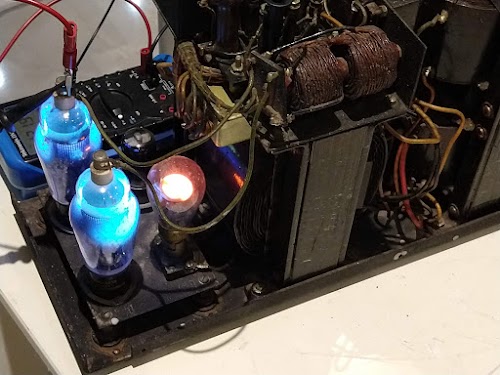 The thyratron tubes in the Teletype REC-30 power supply give off a blue glow. The orange light is a neon bulb used as a voltage reference.

What is a Teletype? 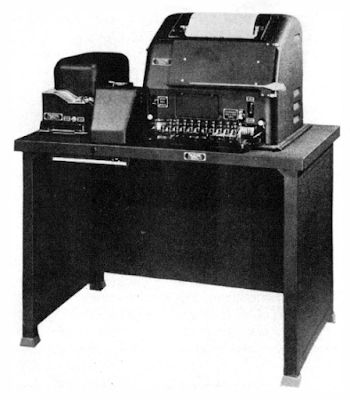 Teletypes are a brand of teleprinter, essentially a typewriter that could communicate long distances over a wire. You may be familiar with Teletypes from old newsroom movies, where they chatter out news bulletins, or you may have seen computers that used an ASR33 Teletype as a terminal in the 1970s. (Much of the terminology used by serial ports on modern computers dates from the Teletype era: start and stop bits, baud rate, tty, and even the break key.) Teletypes could also store and read characters by punching holes in paper tape, using a 5-bit code2 (below). 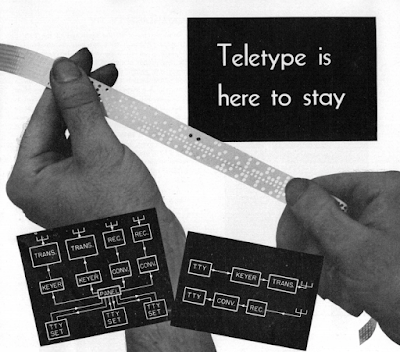 "Teletype is here to stay." This image shows the 5-hole paper tape used by Teletypes. Image from BuShips Electron, 1945.

Teletypes were introduced in the early 1900s. In that pre-electronic era, character selection, serialization, and printing were accomplished through complex electromechanical mechanisms: cams, electromagnets, switches, levers and gears. Pressing a Teletype key closed a combination of switches corresponding to the character. A motorized distributor serialized these bits for transmission over the wire. On the receiving side, electromagnets converted the received data bits into movement of mechanical selectors. The selector pattern matched the notches on one of the typebars, causing that typebar to move and the correct character to be printed.1 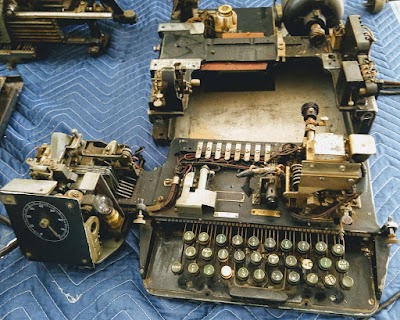 Teletypes communicated with each other using a 60 milliamp current loop: if current is flowing, it's called a mark (corresponding to a hole in the paper tape), and if current is interrupted, it's called a space. Each character was transmitted by sending a start bit, 5 data bits, and a stop bit. (If you've used serial devices on your PC, this is where the start and stop bit originated. And the baud rate is named after Émile Baudot, inventor of the 5-bit code.) The REC-30 power supply produced 900 milliamps at 120V DC, enough current for a room of 15 Teletypes.

You might wonder why Teletypes don't just use voltage levels instead of the strange current loop. One reason is that if you're sending signals over a wire to the next city, it's hard to know what voltage they are receiving because of voltage drops along the way. But if you're sending 60mA, they'll be getting the same 60mA (assuming no short circuits). 3 The hefty current was necessary to drive the electromagnets and relays in Teletypes. Later Teletypes often used a 20 mA current loop instead of 60 mA.

Why a switching power supply 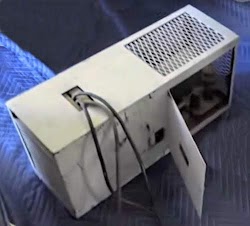 REC 30 Teletype power supply in its case painted Navy gray. The power cords exit the top. The tubes are behind the door on the right.

Inside the REC-30 power supply

The photo below shows the main parts of the REC-30 power supply. AC power enters at the left and is fed into the large autotransformer. The autotransformer is a special single-winding multi-tap transformer that converts the input AC voltage (between 95V and 250V)6 into a fixed 230V AC output. This allows the power supply to accept a variety of input voltages, simply by connecting a wire to the right autotransformer terminal. The 230V output from the autotransformer feeds the plate drive transformer, which outputs 400 volts AC to the thyratron tubes.5 The thyratron tubes rectify and regulate the AC into DC, which is then filtered by capacitors (not visible in photo) and inductors (chokes), to produce the 120V DC output. 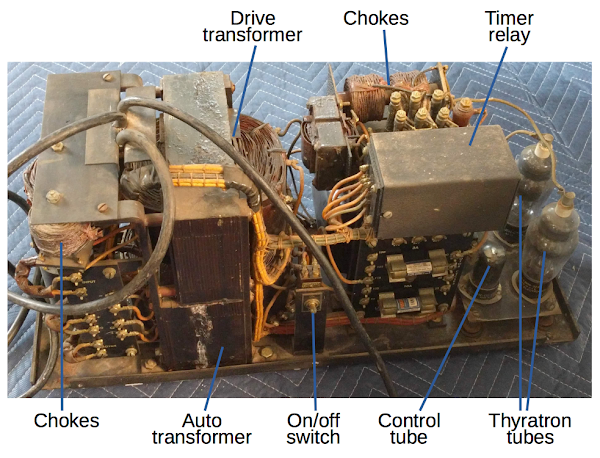 Ignoring the switching for a moment, the AC-to-DC conversion in the REC-30 power supply uses a full-wave rectifier and center-tapped transformer (the drive transformer), similar to the diagram below. (The thyratron tubes provide rectification rather than the diodes in the diagram.) The transformer windings provide two sine waves, out of phase, so one will always be positive. The positive half goes through one of the thyratron tubes, producing pulsed DC output. (In other words, the negative half of the AC waveform is flipped to produce a positive output.) The power supply then smooths out these pulses to provide steady voltage, using inductors (chokes) and capacitors as filters.

Unlike the diodes in the diagram above, the thyratron tubes in the power supply can be turned on and off, providing control over the output voltage. The basic idea is to turn the thyratron on for a fixed part of the AC cycle, as shown below. If it is on for the full cycle, you get the full voltage. If it is on for half the cycle, you get half the voltage. And if it is only on for a small part of the cycle, you get a small voltage.7 This technique is called phase angle control because it turns the device on at a particular phase angle (i.e. a particular point between 0° and 180°in the AC sinusoid). (This is very similar to a common light dimmer switch, which uses a semiconductor TRIAC rather than thyratron tubes.11)

Diagram of phase control. Top shows the fraction of the pulse used. Bottom shows the point at which the thyratron switches on. Image by Zureks, CC BY-SA 2.5.

The thyratron tubes in the power supply resemble vacuum tubes, but have argon and mercury vapor inside their glass shell (unlike vacuum tubes which not surprisingly contain a vacuum). These thyratron tubes are constructed from three components: the filament, the plate, and the grid. The filament, kind of like a light bulb filament, heats up and gives off electrons. The plate, connected to the top of the tube, receives electrons, allowing current to flow from the filament to the plate. Finally, a control grid between the filament and the plate can block the electron flow. When electrons flow to the plate, the mercury vapor in the tube ionizes, turning on the tube and producing the blue glow you can see below. (In contrast, a regular vacuum tube has a flow of electrons, but nothing to ionize.) The ionized mercury provides a highly conductive path between the filament and the plate, allowing a large (1.5 amp) current to flow. Once the mercury ionizes, the grid no longer has control over the tube and the thyratron remains on until the voltage between the filament and plate drops to zero. At this point, the ionization ceases and the tube shuts off until it is turned on again. 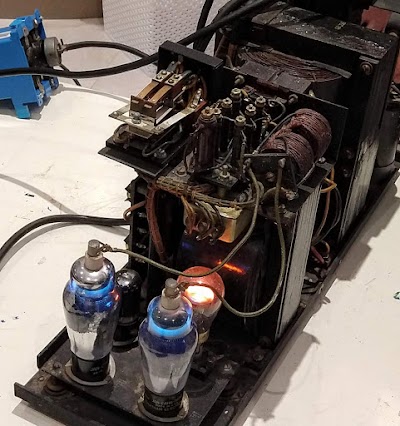 REC-30 Teletype power supply, showing the thyratron tubes with their blue glow and the neon bulb voltage reference glowing orange. The timer/relay is visible in the upper left.

The grid voltage on a thyratron controls the tube. The negative voltage on the grid repels the negatively-charged electrons, preventing electron flow between the filament and the plate. But when the voltage on the plate gets high enough, electrons will overcome the grid repulsion, causing the tube to turn on. The important factor is that the more negative the grid, the more repulsion and the higher the plate voltage needs to be for the tube to turn on. Thus, the grid voltage can control the point in the AC cycle at which the tube turns on.

The control circuit regulates the power supply's output voltage by changing the grid voltage and thus the thyratron timing.9 I used the power supply's adjustment potentiometer to show below how changing the timing changes the voltage. I could set the output voltage (blue) between 114 and 170V. The regulation circuit changed the grid voltage (pink), resulting in the thyratron timing (cyan and yellow) changing accordingly.10 The oscilloscope trace is a bit tricky to interpret; see the footnote for details.12 The main thing to notice is how the ends of the cyan and yellow curves move back as the voltage increases, indicating the thyratrons fire earlier.

Change in phase angle as Teletype REC-30 power supply is adjusted from 130V to 170V output. Yellow and cyan are the voltage across the thyratrons. Pink is the grid control signal. Blue is the (inverted) output voltage.

The schematic below shows the circuitry of the REC-30 power supply (larger schematic here). The AC input circuit is highlighted in green, with the autotransformer adjusting the input voltage to 230V and feeding the drive transformer. These thyratron tubes have the interesting requirement that they must be heated up before use to ensure that the mercury is vaporized; a bimetallic timer waits 20 seconds before powering up the drive transformer.8 On the secondary side of the drive transformer, the 400V drive voltage is in red, the regulated output voltage from the thyratrons is orange, and the low side of the output is blue.13 The regulation circuit (at the bottom) is a bit more complicated. The grid control tube (a 6J6 pentode) provides the control voltage to the grids of the thyratrons, controlling when they will turn on. The grid control tube takes a feedback voltage (pin 5) from the output via a potentiometer voltage divider. The output from this tube (pin 3) sets the thyratron grid voltage to keep the output voltage regulated. The voltage drop across the neon bulb is almost constant, allowing it to act as a voltage reference providing a fixed voltage for the control tube's cathode (pin 8). 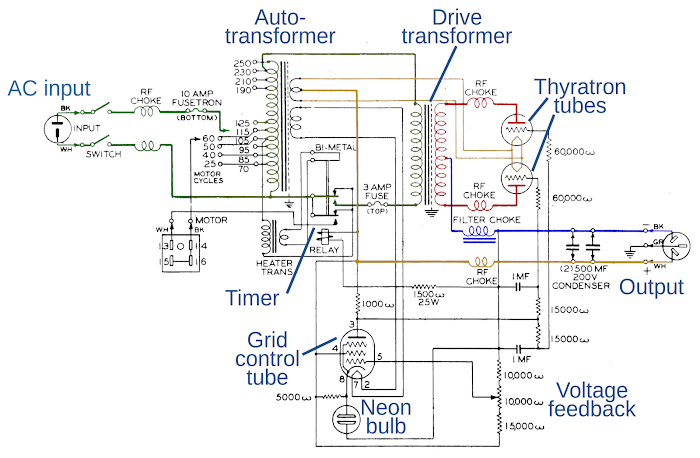 Schematic of the REC-30 Teletype power supply. For some reason, the schematic indicates ohms with a lower-case ω rather than the usual upper-case Ω.

Comparison with a MacBook power supply 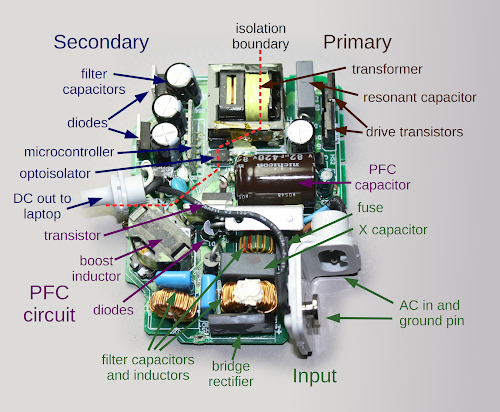 Inside an Apple MacBook 85W power supply. Despite its small size, the MacBook power supply is much more complex than the REC-30. It contains a Power Factor Correction (PFC) circuit to improve power line efficiency. Multiple safety features (including a 16-bit microcontroller) monitor the power supply, shutting it down if there is a fault.

Most of the weight reduction in the Macbook charger comes from replacing the enormous autotransformer and plate drive transformer with a tiny high-frequency transformer. The MacBook power supply operates at about 1000 times the frequency of the REC-30, which allows the inductors and transformers to be much, much smaller. (I wrote more on the MacBook charger here and more on power supply history here.)

The following table summarizes the differences between the REC-30 power supply and the MacBook power supply.

I measured the quality of the REC-30's output voltage (below). The power supply provides much higher quality output than I expected, with only about 200 mV of ripple (the waves in the horizontal blue line) which is close to Apple-level quality. There are also narrow spikes (the vertical lines) of about 8 volts when the thyratrons switch. These spikes are fairly large compared to an Apple power supply but still better than a cheap charger. 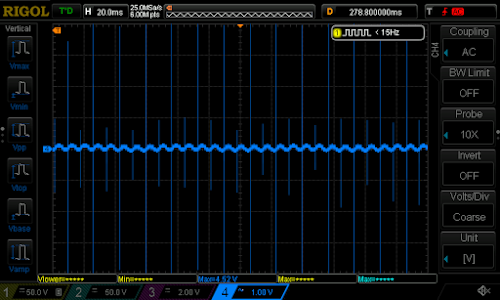 Output from the REC-30 power supply, showing a small amount of ripple and switching spikes.

The REC-30 power supply provided over 100 watts of DC power for Teletype systems. Introduced in the 1940s, the REC-30 was an early switching power supply that used mercury-filled thyratron tubes for efficiency. It was a monstrously large unit for a 100 watt power supply, weighing over 100 pounds. A comparable modern power supply is under 1% of the size and weight of this unit. Despite its age, the power supply worked flawlessly when we powered it up, as you can see in Marc's video below. The power supply is beautiful in operation, with a blue glow from the thyratrons and orange from the large neon bulb.

I announce my latest blog posts on Twitter, so follow me at @kenshirriff for future articles. I also have an RSS feed. Thanks to Carl Claunch and Marc Verdiell for work on the power supply.