GAN Lab: Play with Generative Adversarial Networks in Your Browser!

Loading...
It may take a few tens of seconds.

Many machine learning systems look at some kind of complicated input (say, an image) and produce a simple output (a label like, "cat"). By contrast, the goal of a generative model is something like the opposite: take a small piece of input—perhaps a few random numbers—and produce a complex output, like an image of a realistic-looking face. A generative adversarial network (GAN) is an especially effective type of generative model, introduced only a few years ago, which has been a subject of intense interest in the machine learning community.

You might wonder why we want a system that produces realistic images, or plausible simulations of any other kind of data. Besides the intrinsic intellectual challenge, this turns out to be a surprisingly handy tool, with applications ranging from art to enhancing blurry images.

How does a GAN work?

The idea of a machine "creating" realistic images from scratch can seem like magic, but GANs use two key tricks to turn a vague, seemingly impossible goal into reality.

The first idea, not new to GANs, is to use randomness as an ingredient. At a basic level, this makes sense: it wouldn't be very exciting if you built a system that produced the same face each time it ran. Just as important, though, is that thinking in terms of probabilities also helps us translate the problem of generating images into a natural mathematical framework. We obviously don't want to pick images at uniformly at random, since that would just produce noise. Instead, we want our system to learn about which images are likely to be faces, and which aren't. Mathematically, this involves modeling a probability distribution on images, that is, a function that tells us which images are likely to be faces and which aren't. This type of problem—modeling a function on a high-dimensional space—is exactly the sort of thing neural networks are made for.

The big insights that defines a GAN is to set up this modeling problem as a kind of contest. This is where the "adversarial" part of the name comes from. The key idea is to build not one, but two competing networks: a generator and a discriminator. The generator tries to create random synthetic outputs (for instance, images of faces), while the discriminator tries to tell these apart from real outputs (say, a database of celebrities). The hope is that as the two networks face off, they'll both get better and better—with the end result being a generator network that produces realistic outputs.

To sum up: Generative adversarial networks are neural networks that learn to choose samples from a special distribution (the "generative" part of the name), and they do this by setting up a competition (hence "adversarial").

What's happening in the visualization?

GANs are complicated beasts, and the visualization has a lot going on. Here are the basic ideas.

First, we're not visualizing anything as complex as generating realistic images. Instead, we're showing a GAN that learns a distribution of points in just two dimensions. There's no real application of something this simple, but it's much easier to show the system's mechanics. For one thing, probability distributions in plain old 2D (x,y) space are much easier to visualize than distributions in the space of high-resolution images.

To start training the GAN model, click the play button (

Figure 2. Fake samples' positions continually updated as the training progresses. Then, the distributions of the real and fake samples nicely overlap.

Recall that the generator and discriminator within a GAN is having a little contest, competing against each other, iteratively updating the fake samples to become more similar to the real ones. GAN Lab visualizes the interactions between them.

Generator. As described earlier, the generator is a function that transforms a random input into a synthetic output. In GAN Lab, a random input is a 2D sample with a (x, y) value (drawn from a uniform or Gaussian distribution), and the output is also a 2D sample, but mapped into a different position, which is a fake sample. One way to visualize this mapping is using manifold [Olah, 2014]. The input space is represented as a uniform square grid. As the function maps positions in the input space into new positions, if we visualize the output, the whole grid, now consisting of irregular quadrangles, would look like a warped version of the original regular grid. The area (or density) of each (warped) cell has now changed, and we encode the density as opacity, so a higher opacity means more samples in smaller space. A very fine-grained manifold will look almost the same as the visualization of the fake samples. This visualization shows how the generator learns a mapping function to make its output look similar to the distribution of the real samples.

Figure 3. The generator's data transformation is visualized as a manifold, which turns input noise (leftmost) into fake samples (rightmost).

Discriminator. As the generator creates fake samples, the discriminator, a binary classifier, tries to tell them apart from the real samples. GAN Lab visualizes its decision boundary as a 2D heatmap (similar to TensorFlow Playground). The background colors of a grid cell encode the confidence values of the classifier's results. Darker green means that samples in that region are more likely to be real; darker purple, more likely to be fake. As a GAN approaches the optimum, the whole heatmap will become more gray overall, signalling that the discriminator can no longer easily distinguish fake examples from the real ones. 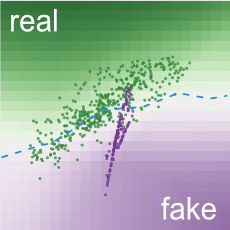 Figure 4. The discriminator's performance can be interpreted through a 2D heatmap. Here, the discriminator is performing well, since most real samples lies on its classification surface’s green region (and fake samples on purple region).

Understanding interplay between generator and discriminator. 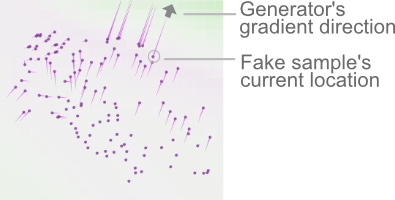 Figure 5. Fake samples' movement directions are indicated by the generator’s gradients (pink lines) based on those samples' current locations and the discriminator's curren classification surface (visualized by background colors).

GAN Lab has many cool features that support interactive experimentation.

) to reveal individual hyperparameters, and edit them on the fly during training.
User-defined data distribution
If you don't like our selection of distributions, draw your own by clicking the icon (

) at the end of the data distributions list.
Slow-motion mode
Lost track of the animation? Then you can slow it down by clicking the slow-motion icon (

) to enter slow-mo. Check out this video
Manual step-by-step execution
If you want more control, you can manually train individual iteration step by step by clicking the icon (

). Check out this video

Check out the following video for a quick look at GAN Lab's features.

How is it implemented?

GAN Lab uses TensorFlow.js, an in-browser GPU-accelerated deep learning library. Everything, from model training to visualization, is implemented with JavaScript. You only need a web browser like Chrome to run GAN Lab. Our implementation approach significantly broadens people's access to interactive tools for deep learning. The source code is available on GitHub.

GAN Lab was created by Minsuk Kahng, Nikhil Thorat, Polo Chau, Fernanda Viégas, and Martin Wattenberg, which was the result of a research collaboration between Georgia Tech and Google Brain. We also thank Shan Carter and Daniel Smilkov, Google Big Picture team and Google PAIR, and Georgia Tech Visualization Lab for their feedback.

For more information, check out our research paper: