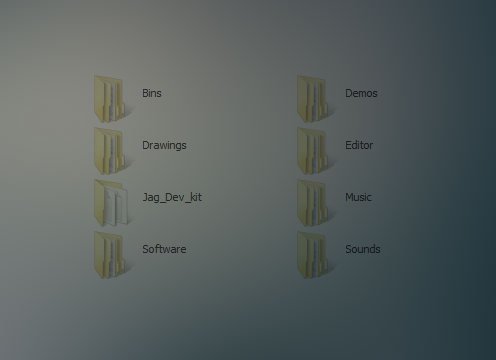 Readily available on the Internet1, there is a treasure trove of files recovered from Atari Corp. when it closed down. The accompanying readme describes it as many Syquest and floppy disks that came out of Atari HQ's.2 However, most of the files are related to the Falcon030 and the Jaguar of the mid 1990s, while my primary interest in Atari computers is in the older (mid 1980s to early 1990s) ST line of machines.

A first find ‒ A chip that was never released

Some files in Drawings\4118 in an obscure DWG format3 caught my eyes, though. They are dated October 16, 1989 and a quick glimpse with a hex editor revealed they contained information about a 68K Game Shifter and made reference for example to clock generators. I wondered, could these be schematics of an Atari ASIC (application-specific integrated circuit, also know as custom chip)? And how could I open them?

Luckily, further browsing the files revealed in Software\ST\schematic an Atari program to print said DWG files. The very sparse documentation mentioned GDOS, so I installed FontGDOS, configured a HP Laserjet printer driver, setup the Steem emulator to capture printer output to a file, and proceeded to call print.prg with one of the drawings. To my great delight, print data in HP’s PCL format started filling the output file, so I continued to print all 30 files. GhostPCL was then helpful to convert the printout into PDF format.

And what can I say: I indeed discovered an ASIC design for a video shifter, code number ST-4118, Revision A. The ST in this case probably refers to Styra Semiconductor Corporation, Atari’s semiconductor subsidiary. The design includes blocks such as I/O, address decoding, a color palette, a DAC, and much more:

The pinout of that 68K Game Shifter, however, does not match the Shifter IC in any of the Atari ST computers. But incidentally, the never released Atari Panther was to be a Motorola 68000 based game console. Furthermore, the Panther prototype board features a chip conspicuously marked 4118!

So after the cancellation of the Panther development in 1991, I may well be first person for 25 years to be looking at the design of its shifter chip.

Note the name on the sheets: D. Renn. A Greek blog post has a photo of Douglas L. Renn with the layout of the Blitter IC and this history of Atari tells me that Douglas L. Renn had left Commodore together with Jack Tramiel and Shiraz Shivji among others.

Also in the directory mentioned above there are Spice circuit simulation models, referencing IMP CMOS transistor models. IMP of course being International Microelectronic Products, Inc., known to have manufactured a multitude of IC designs for Atari.

A bunch of floppy disks

While this was a very exciting find, I was still more interested in Atari ST computers than in a never finished game console. So I continued searching. The Software\PC\5_25_floppy directory contained six files with names starting with D890905, suggesting these were dated from September 1989, right before the Atari STE was released. As indicated by the directory name and confirmed by the file sizes, these were 5 1/4” HD floppy disk images, although strangely only with 79 tracks, instead of the standard 80 tracks.

The trusty hex editor showed that the files were not floppy images with an MS-DOS compatible boot sector and FAT file system, so they could not easily be extracted. But mentions of more four digit numbers and DWG files piqued my curiosity.

Screening the floppy disk images further revealed that these were backups made with FastBack, a software for MS-DOS seemingly popular at the time4 and also to be found in the Atari HQ set of files. Without access to a PC with a 5 1/4” floppy drive, restoring the images proved quite a challenge, though. In DOSBox, the backup software failed even to acknowledge the existence of the emulated floppy drive onto which I had mounted the image.

For nostalgic reasons, I keep an installation of Windows 95 under Microsoft Virtual PC. A version of FastBack capable to start from the Windows 95 DOS box was quickly obtained from the Internet. However, Virtual PC does not support 5 1/4” floppies, only the slightly less antiquated 3 1/2” ones. So I wrote a small program to convert the images into an acceptable format, simply by padding 3 sectors at the end of each track5 and by adding an empty 80th track.

I loaded the first of the modified disk images into Virtual PC, started FastBack, held my breath and hit restore. Astonishingly, the software began to restore this almost 27 year old backup. While one of the floppies (D890905A.002) is missing and some sectors of the images are seemingly corrupted, I managed to extract a bunch of mostly ARC compressed files in folders with such fascinating names as DWG and SIM. Some shell scripting later and all the files lay before me uncompressed.

The hex editor confirmed that I found data about the ST MCU / GLUE COMBO (as found in the STE) and several revisions of the Blitter IC! It took a nerve-stretching amount of time to convert all the DWG files to PDF as described above. But then I could finally take a look: literally hundreds of sheets of drawings with ASIC schematics, timing diagrams etc.!

The drawings date from 1986 to 1989, contain multiple Blitter designs (code numbers TA-4021, ST-4051, ST-4082) as well as three different revisions of the STE GSTMCU (code numbers TA-4081, ST-4081), all made again by D. Renn. Maybe they are all together in a set of backup disks because he was tasked with designing the chip combining MMU, Glue and Blitter that was later found in the Atari MegaSTE.

I still haven’t finished exploring the files. The floppy disk images also contain netlists, simulation data, and test vectors, among other things, that probably would require the original IC design software6 to be interpreted. And who knows what is still hidden in there...

Download a combined archive of the files that I recovered and further schematics contributed by Mike from fpgaarcade.com. Apart from the ASIC designs mentioned above there is also an incomplete schematic of the Atari Sparrow (Falcon prototype), some chip designs (ST-4078, ST-4079, ST-4080) whose purpose is currently unknown, and more. A README_FIRST.TXT is included containing some details about the files. Also, in the meantime I have found a way to include searchable text in the schematics, so the PDF files will gradually be updated accordingly in this archive.

Download just the files that I recovered. This is only a subset of the archive above, but with the original file system structure of the floppy disks preserved.

Download the schematics of the Atari Panther console.These aren't on the floppy disks but were also recently discovered in the Atari HQ set of files by me.

I am excited to see what else will come out of this discovery!