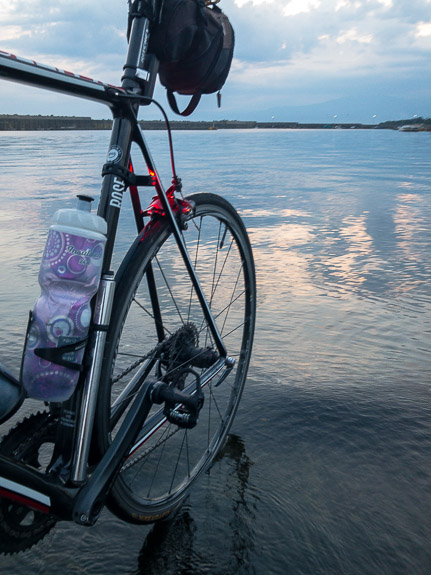 I recently did a bicycle ride that I'd been planning for months: to do Japan's biggest road climb, a single climb going from sea level to Japan's highest paved road at Mt. Norikura, at an elevation of 2,717m (8,914'). As far as I know, it's the biggest possible elevation gain in a single paved-road climb in Japan, and as far as I know, it's never been done, or even known of, until now.

I've ridden that “highest paved road in Japan” road before, as blogged about here, but this time I would start 110km (68mi) away at the ocean (elevation: 0), in the city of Toyama.

I'd spent months researching the most direct route from the ocean, updating road data (as described in “Updating Maps for Cycling, Including Japan’s Pseudo One-Way Roads”), refining my elevation database, and scoping out places to get food and drink along the way.

Here's the route that I came up with:

... and here's the elevation profile:

It's almost completely flat at the start, rising ever-so-gently from the ocean towards the mountains. It's one solid climb all the way from pretty much anywhere you start in Toyama; I found a boat launch that's paved into the ocean, so that seems to be a great place to start.

I'd gotten a hotel in Toyama, and was out the door by 5am to make the 20-minute ride up to the climb's starting spot in the ocean. I'd come the previous afternoon, after checking into the hotel, to make sure that it still existed (I'd done all my research with Google Maps and Google Earth). 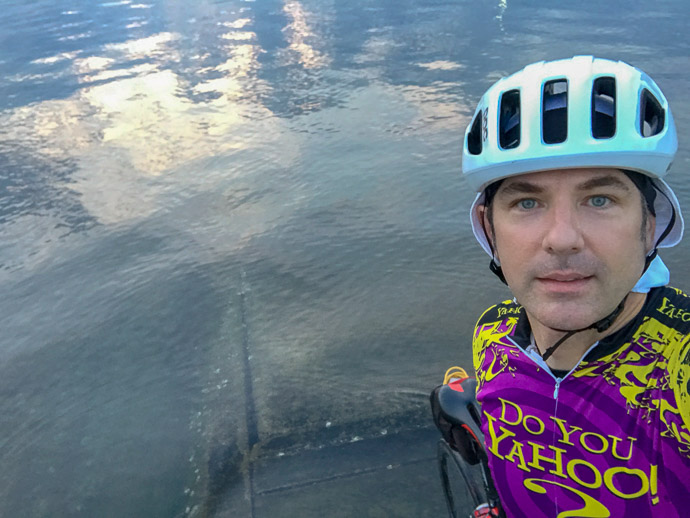 I picked a simple path through the city, so as to make an easy-to-follow route in case others might want to do it.

I say it's “one unbroken climb”, but that's in the big-picture sense, and doesn't mean that every step forward actually goes up. (If that were the case, traversing a speed bump would break a climb into two.) There are times over the 110km that the roads dips down slightly, such as a short mild descent to meet a bridge that crosses a river, or to dip under train tracks:

For all practical purposes, though, it's one single climb, and so I was looking forward to have it under my belt.

The sun rose at 5:35, but didn't make an appearance until 6am. I thought it was lovely at the time, but it heralded a strong wind that materialized out of nowhere. I'd been feeling good until then, but then became consumed with worry that I'd have to contend with the wind for the next five hours, until I got to the steep stuff (for which a wind doesn't matter as much). 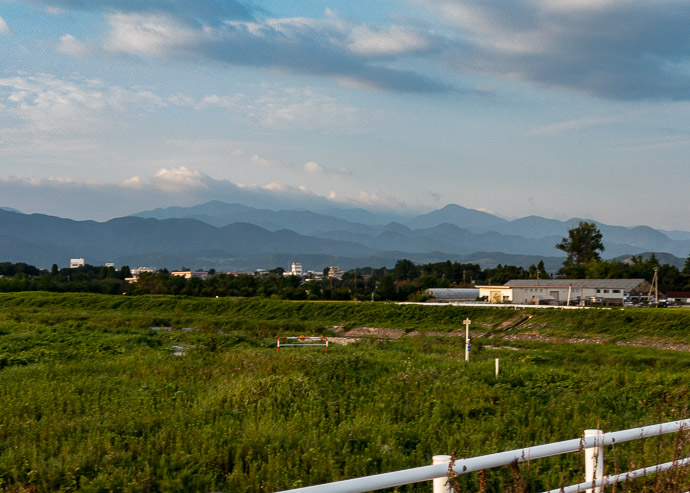 The first 80km has only 800m of climb, so it averages a very mild 1%, though there are a few short sections at 5%. There's even one very short bit that goes down at 5%, but it's so short that it has no material impact on the overall climb.

I felt good, other than the headwind and a slight bloating feeling. I was worried that I'd not have a lot of chances to refill on water during the ride into the mountains, so I was drinking a lot and refilling whenever I had the chance. I was also eating copious amounts, in addition to the big breakfast I'd had at the hotel, so as to avoid The Bonk (running out of energy) on the long ride. In this I was successful.

Despite what one might think at first, that sign doesn't mean “12% grade for the next 6km”, but instead it means that there are sections that are up to 12% steepness at points during the next 6km. The average for the 6km is actually just 5%, so it's not that bad.

I've written about the ridiculous way some Japanese road-restriction signs present themselves, such as in “No Motorcycles Allowed….. Sometimes… Sort of”, but the one above takes the cake.

Here's a literal translation of the various parts:
(Note that in Japanese traffic law, a bicycle is a “vehicle” just like a car or truck or bus.)

6pm through the next day's 7am

July 1 through September 30
6pm through the next day's 3:30am
NO VEHICULAR TRAFFIC (busses, taxies, bicycles, special permission excepted) May 15 through June 30 October 1 through October 31

What this is saying, in the most-convoluted way, is:

From July 1 through October 31, only buses, taxies, bicycles, and those with special permission are allowed, and only during the day (well, from 3:30 am in the middle of the summer).

The sign doesn't mention anything about other times of the year (fall, winter, and spring), but I know that the road is physically closed off with a gate, due to snow.

The takeaway from this is that normal passenger cars are completely prohibited at all times.

I don't understand why they need to present it in such a convoluted way. Everything is a restriction (including the “... excepted” part, which is a restriction on the restriction), which I suppose is fine, but why couldn't they say it simply?

I wonder how long it would take the average Japanese driver, when presented with these signs, to realize that they're telling him that he's not allowed to proceed?

In any case, as a cyclist, I was allowed to take the road at that date and time, so I did. It was steep, but pretty.

That section of road was about 4km, and averaged 9.3%.

It brought me, finally, to the Norikura Skyline, the last 14km (8.5 mi) stretch to the top. Despite being only 13% of the distance, its 1,020m (3,350') of climb comprised more than a third of the entire trip's. It averages a 7.3% grade overall, but that belies the fact that not all sections are the same: the 2nd and 8th kilometers average 10%, and the kilometer after each of those averages 9%. On the other end of the scale, the 13th kilometer averages only 3.6%, bless its heart.

This final push to the top would be the most physically-demanding section, but having completed the long, mentally-demanding runup to here, with the goal in sight, I was feeling good.

As I approached the guard/toll gate, a worker had come out and stood waiting to meet me with wrists crossed in an “X” sign, the universal sign in Japan for “no/closed/bad”. I knew immediately that my attempt at Japan's Biggest Climb was over, because I knew that in Japan when these kinds of decisions were made, they were completely non-negotiable.

The “too much fog” reason is just so stupid. I can certainly take responsibility for myself, and as for others, the road is always closed to normal traffic, so the only vehicles allowed are the occasional taxi or bus driven by professionals. (As you can see in the photo above, the toll for a large bus is 10,200 yen, about US$100!) I had bright flashing lights both front and back, and the fog, however thick it was, would have been only at the very top anyway. It was just stupid.

It seems that I should have checked The Skyline's home page to see the current status, I learned from the guard. As of this writing, the road is open to cyclists, as evidenced by the marked circle: 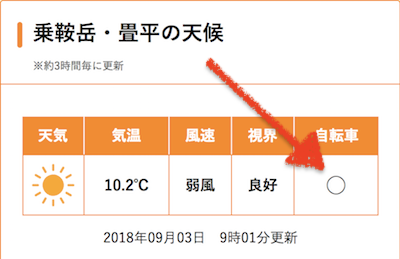 When I was turned away, it was an “⨉”, and had been so from the previous day.

Overall, I spent half an hour there, at first trying to talk my way in, and then in figuring out what I'd do going forward. The main guy I talked to (not the one in the photo above) was full of empathy and easy to talk to, so that made things better, but it was still so very disappointing. I turned around to return to the hotel.

I eventually headed down a different way than I'd come up, via a lovely descent. But after having ridden more than 100km up hill, any descent would have been lovely.

The road eventually flattened out, and in the flatter areas the headwind had returned. Since three hours had been cut from my trip by the Norikura Skyline guard, I had plenty of time and was in no rush, so I took it easy, as I had been all day.

50km (32mi) into my return, I had a momentary worry about another road closure:

I'd had two routes worked out for my return, one that was easy and one that looked to be very, very hard. On the return I'd been toying with the idea to try the hard one, but on paper it seemed almost as hard as the Mt. Fuji climb I'd done two months prior, which was both mentally and physically very difficult for me, so I'd decided that I just wasn't up to trying it. But now with this huge “Road Closed” sign, I worried that I'd have to do it.

This road, which was bypassed by a modern tunnel, looked much more appealing in Google Street View photos from four years ago:

As it was, I had to pick my way between the overgrowth, and among many fallen rocks and branches, but it was still nice.

The next 25km (17mi) were mostly downhill, and I seemed to have a tailwind because at times my speed was more than I could otherwise explain. It was nice.

I brought my scale along to weigh myself before and after. During the ride I had 9,075ml of drink (2.4 gallons) which in itself weighs 9kg (20lb), and in addition ate in abundance, but I still lost 3.8kg (8.4lb) during the 12-hour ride. This did involve one bathroom break, but the bulk of the loss was 28 pounds worth of sweat. Wow.

Here's the ride at Strava:

And here's the Relive video of it:

My hotel was a nice business-budget hotel near the train station, and as such the restaurant was more “cafeteria” than “restaurant”, but I was happy for real food.

I had a couple of beers in my room fridge waiting for me, but I ended up just passing out, and sleeping well. I checked out early, and made the 4-hour drive home.