Four balls slide down a cycloid curve from different positions, but they arrive at the bottom at the same time. The blue arrows show the points' acceleration along the curve. On the top is the time-position diagram.

A tautochrone or isochrone curve (from Greek prefixes tauto- meaning same or iso- equal, and chrono time) is the curve for which the time taken by an object sliding without friction in uniform gravity to its lowest point is independent of its starting point. The curve is a cycloid, and the time is equal to π times the square root of the radius (of the circle which generates the cycloid) over the acceleration of gravity. The tautochrone curve is the same as the brachistochrone curve for any given starting point.

It was in the left hand try-pot of the Pequod, with the soapstone diligently circling round me, that I was first indirectly struck by the remarkable fact, that in geometry all bodies gliding along the cycloid, my soapstone for example, will descend from any point in precisely the same time.

The tautochrone problem, the attempt to identify this curve, was solved by Christiaan Huygens in 1659. He proved geometrically in his Horologium Oscillatorium, originally published in 1673, that the curve was a cycloid.

On a cycloid whose axis is erected on the perpendicular and whose vertex is located at the bottom, the times of descent, in which a body arrives at the lowest point at the vertex after having departed from any point on the cycloid, are equal to each other...[1]

, where r is the radius of the circle which generates the cycloid, and g is the gravity of Earth.

This solution was later used to attack the problem of the brachistochrone curve. Jakob Bernoulli solved the problem using calculus in a paper (Acta Eruditorum, 1690) that saw the first published use of the term integral.[2] 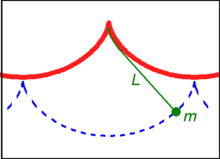 Schematic of a cycloidal pendulum

The tautochrone problem was studied by Huygens more closely when it was realized that a pendulum, which follows a circular path, was not isochronous and thus his pendulum clock would keep different time depending on how far the pendulum swung. After determining the correct path, Christiaan Huygens attempted to create pendulum clocks that used a string to suspend the bob and curb cheeks near the top of the string to change the path to the tautochrone curve. These attempts proved unhelpful for a number of reasons. First, the bending of the string causes friction, changing the timing. Second, there were much more significant sources of timing errors that overwhelmed any theoretical improvements that traveling on the tautochrone curve helps. Finally, the "circular error" of a pendulum decreases as length of the swing decreases, so better clock escapements could greatly reduce this source of inaccuracy.

Later, the mathematicians Joseph Louis Lagrange and Leonhard Euler provided an analytical solution to the problem.

If the particle's position is parametrized by the arclength s(t) from the lowest point, the kinetic energy is proportional to

where the constant of proportionality has been set to 1 by changing units of length. The differential form of this relation is

which eliminates s, and leaves a differential equation for dx and dy. To find the solution, integrate for x in terms of y:

. This integral is the area under a circle, which can be naturally cut into a triangle and a circular wedge:

To see that this is a strangely parametrized cycloid, change variables to disentangle the transcendental and algebraic parts by defining the angle

which is the standard parametrization, except for the scale of x, y and θ.

The simplest solution to the tautochrone problem is to note a direct relation between the angle of an incline and the gravity felt by a particle on the incline. A particle on a 90° vertical incline feels the full effect of gravity, while a particle on a horizontal plane feels effectively no gravity. At intermediate angles, the "virtual gravity" felt by the particle is g sin θ. The first step is to find a "virtual gravity" that produces the desired behavior.

The "virtual gravity" required for the tautochrone is simply proportional to the distance remaining to be traveled, which admits a simple solution:

It can be easily verified both that this solution solves the differential equation and that a particle will reach s = 0 at time π/(2k) from any starting height A. The problem is now to construct a curve that will produce a "virtual gravity" proportional to the distance remaining to travel, i.e., a curve that satisfies:

The explicit appearance of the distance remaining is troublesome, but we can differentiate to obtain a more manageable form:

This equation relates the change in the curve's angle to the change in the distance along the curve. We now use the Pythagorean theorem, the fact that the slope of the curve is equal to the tangent of its angle, and some trigonometric identities to obtain ds in terms of dx:

Substituting this into the first differential equation lets us solve for x in terms of θ:

, we see that these equations for

are those of a circle rolling along a horizontal line — a cycloid:

Solving for k and remembering that

is the time required for descent, we find the descent time in terms of the radius r:

Niels Henrik Abel attacked a generalized version of the tautochrone problem (Abel's mechanical problem), namely, given a function T(y) that specifies the total time of descent for a given starting height, find an equation of the curve that yields this result. The tautochrone problem is a special case of Abel's mechanical problem when T(y) is a constant.

Abel's solution begins with the principle of conservation of energy — since the particle is frictionless, and thus loses no energy to heat, its kinetic energy at any point is exactly equal to the difference in potential energy from its starting point. The kinetic energy is

, and since the particle is constrained to move along a curve, its velocity is simply

is the distance measured along the curve. Likewise, the gravitational potential energy gained in falling from an initial height

Now we integrate from

to get the total time required for the particle to fall:

would be easy to calculate). But Abel's mechanical problem requires the converse — given

, we wish to find

, from which an equation for the curve would follow in a straightforward manner. To proceed, we note that the integral on the right is the convolution of

and thus take the Laplace transform of both sides:

, we now have an expression for the Laplace transform of

This is as far as we can go without specifying

and then take the inverse transform (or try to) to find

is constant. Since the Laplace transform of 1 is

It can be shown that the cycloid obeys this equation.