On the Kidnapped African Boy Who Became a German Philosopher

In 1707, a boy no more than five years old left Axim, on the African Gold Coast, for Amsterdam, aboard a ship belonging to the Dutch West India Company. In those days, the trip to Europe took many weeks, but his arrival in the Dutch port was not the end of his long journey. He then had to travel another few hundred miles to Wolfenbüttel, the home of Anton Ulrich, Duke of Brunswick-Wolfenbüttel. Anton Ulrich was a major patron of the European Enlightenment. His librarian was Gottfried Leibniz, one of the leading philosophers, mathematicians, and inventors of his era, and co-creator, with Isaac Newton, of calculus; and the ducal library in Wolfenbüttel housed one of the most magnificent book collections in the world.

The child had apparently been offered as a “gift” to the duke, who, in turn, handed the boy on to his son, August Wilhelm; and we first hear of him as a member of August Wilhelm’s household. From his baptism until 1735, the boy continued to receive the patronage of the dukes of Brunswick-Wolfenbüttel, as Anton Ulrich was succeeded by August Wilhelm, and August Wilhelm was succeeded by his brother, Ludwig Rudolf, in turn. And, as a child, he would no doubt have met Leibniz, who lived, as he did, under their patronage.

We don’t know what the African boy’s status was: Had he been enslaved? Was he sent by missionaries for a Christian education? What we do know is that Anton Ulrich took a special interest in him, arranging for his education, and giving him, at his baptism, both his own Christian name and his son’s middle name: so the young man came to be known as Anton Wilhelm. The dukes had apparently taken the occasion of the gift of an African child to conduct one of those famous Enlightenment experiments, aiming to explore whether an African could absorb and contribute to modern scholarship. The ducal family might have been aware of a similar experiment, which began a few years earlier, when Tsar Peter the Great of Russia took an African slave as his godson, naming him Hannibal. He went on to be a successful Russian general, and was the great-grandfather of Alexander Pushkin, the founder of modern Russian literature. (Pushkin began, but never finished, a novel called The Moor of Peter the Great.)

We’re not sure when Anton Wilhelm started using his Nzema name, Amo. At his confirmation, the church records in Wolfenbüttel call him Anton Wilhelm Rudolph Mohre; Mohr (Moor) being one of the ways Germans then referred to Africans. But in later life he often called himself Anton Wilhelm Amo Afer, using the word for African in Latin, which was the language of European scholarship. So he wanted to be known as Amo the African.

“The dukes had apparently taken the occasion of the gift of an African child to conduct one of those famous Enlightenment experiments, aiming to explore whether an African could absorb and contribute to modern scholarship.”

The experiment with the young African has to be accounted a success. Our knowledge of his early education is sketchy, but Amo, as the duke’s godson, perhaps began his schooling at the Wolfenbüttel Ritter-Akademie, alongside the children of the local aristocracy (Ritter is the German word for a knight). We do know he went on to the nearby university at Helmstedt, founded more than a century earlier by one of the duke’s predecessors. Amo must have flourished there, because he earned the right to go on, in 1727, to study law at the University of Halle, then (as now) one of Germany’s leading centers of teaching and research.

Halle took Amo out of the duke’s domain into the state of Brandenburg, which was then ruled by the Prussian king. He was awarded a master’s degree for his legal thesis at Halle—which dealt, aptly enough, with the European law of slavery—and then went on to study at the University of Wittenberg (where a young Martin Luther had taught theology), becoming the first black African to earn a European doctoral degree in philosophy. Here, he was in the domain of the Elector of Saxony, who was soon to become King of Poland, as well. Along the way, Amo added knowledge of medicine and astronomy to his philosophical and legal training. When the Elector of Saxony came to visit in 1733, Amo was chosen to lead the students’ procession in his honor. His Wittenberg thesis, which was published in 1734 under the title, On the Apatheia of the Human Mind, makes important criticisms of Descartes’s views of sensation.

Amo, who came to know Dutch, French, Latin, Greek, Hebrew, and, perhaps, English, as well as German, went on to teach at Halle and Jena, publishing, in 1738, a book entitled The Art of Sober and Accurate Philosophizing, which discussed issues in almost every area of the subject. He won eminent admirers. The great physicist and philosopher Martin Gotthelf Loescher, who examined his thesis at the University of Wittenberg, spoke of the Gold Coast as “the mother. . . of the most auspicious minds,” and added:

Among these auspicious minds, your genius stands out particularly, most noble and most distinguished Sir, seeing that you have excellently demonstrated felicity and superiority of genius, solidity and refinement of learning and teaching, in countless examples before now, and even in this our University, with great honor in all worthy things, and now also in your present dissertation.

I have said that Amo’s education was an experiment. But we need to be careful in deciding what hypothesis it was designed to explore. Amo, as we saw, was referred to as a Moor in his baptismal records and called himself, later, Afer, the African. When he wrote about the law of slavery, he titled his work De jure maurorum (On the Law of the Moors). The great contemporaneous encyclopedia the Zedler, in its definition of the word “Moor,” treats it as equivalent to Ethiopian or Abyssinian, but continues, “this name is also given to all blacks, like the Negroes, and other African peoples of this color.” “Afer,” in classical Latin, referred to a people—the Afri—who lived around ancient Carthage. But gradually it came to mean a person from Rome’s African colonies, and, finally, anyone from the whole continent. Still, it is clear that Amo’s black skin linked him in the minds of his German contemporaries not just with all black people but also with other inhabitants of the African continent. These are not, however, as they knew as well as we do, the same thing.

When Johann Gottfried Kraus, the Rector of Wittenberg, complimented Dr. Amo on his successful defense of his dissertation, he began by talking about his African background, mentioning some of the most famous African writers from Antiquity, including the Roman playwright Terence—who, like Amo, had given himself the last name Afer—and Tertullian and St. Augustine, along with other Fathers of the Church born in North Africa. He mentioned the Moors who conquered Spain from Africa. All of these people, as Kraus surely knew, were of Berber or Phoenician or Roman ancestry. None of them would have had dark skin or tightly curled black hair like Amo’s. When Luther lived in Wittenberg, his home was an Augustinian monastery, but no picture he would have seen of St. Augustine would have depicted him as black.

So, if the dukes who supported him were interested in whether an African could be a brilliant intellectual, they already knew the answer: people such as Terence, Tertullian, and St. Augustine had long ago proved that they could. Presumably, they were interested in a question not about Africans but about black people, about Negroes. Yet what would you learn from a single experiment with one black man? Did Anton Ulrich and his friends conclude that any black child, taken at random and given Amo’s education, would have ended up as a professor of philosophy? And if Amo had not passed the exams, would they have concluded that this showed something about every black person?

At some point, Amo Afer put aside his own pen. Reaching middle age, he decided that it was time to go home, and, in 1747 he made his way back to the Gold Coast, to the Nzema villages of his birth. It was a bold move. Someone who had been raised in the heartland of the European Enlightenment and had built a scholarly career in some of the most prestigious seats of European learning was now turning his back on the grand experiment he embodied and resolving to make a life in a land he’d last glimpsed as a small child.

We can only guess why. There is some suggestion that increasing color prejudice in this period in Germany—the early stirrings of Europe’s racial fixation—may have caused discomfort: a satirical play was performed in Halle in 1747 in which Astrine, a young German woman, refuses the amorous advances of an African philosophy teacher from Jena named Amo. “My soul,” Astrine insists, “certainly cannot ever love a Moor.” The work demonstrates that Amo was a famous figure in Halle. But the rejection of the Moor is Astrine’s, not the author’s; and some conjecture that what drove Amo off was not racial prejudice but a broken heart.

We know a little more of what happened to him. A Dutch ship’s doctor met him in the mid-1750s at Axim. “His father and a sister were still alive and lived four days’ journey inland,” the doctor reported.

He also reported that Amo, whom he described as “a great sage,” had “acquired the reputation of a soothsayer.” Both sage and soothsayer: This is someone who knew that the deliverances of the Enlightenment were no less his own than those of his Nzema ancestors.

Sometime later, Amo moved from Axim and went to live in Fort St. Sebastian, one of a couple of dozen forts and castles on the coast of Ghana that served the slave trade, near the town of Shama, where he is buried. (It’s a mere dozen miles from where, a century and a half later, Kwame Nkrumah, the world’s best-known Nzema, was born.)

Today, we’re left with questions: What did the soothsayer tell people he had learned from his long sojourn in the north? And how did he explain his decision to leave behind everything he had built there? It’s impossible not to wonder whether his was a flight from color consciousness, a retreat to a place where he would not be defined by his complexion. A place where Amo Afer could be just Amo again; where he didn’t need to be the African. Indeed, his odyssey asks us to imagine what he seems to have yearned for: a world free of racial fixations. It asks if we could ever create a world where color is merely a fact, not a feature and not a fate.It asks if we might not be better off if we managed to give up our racial typologies, abandoning a mistaken way of thinking that took off at just about the moment when Anton Wilhelm Amo was a well-known German philosopher at the height of his intellectual powers. 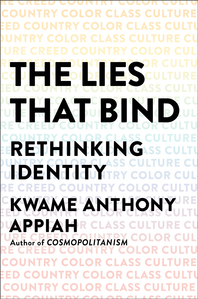