BuzzFeed News Asks Readers to Chip In With Donations

BuzzFeed News is becoming the latest newsroom to ask its readers to help shoulder the cost of newsgathering.

The digital-media company on Monday plans to unveil a feature at the bottom of its news pages that allows readers to donate between $5 and $100. The donation feature asks readers to “help us report to you” and calls upon them to join a community that will shape the future of BuzzFeed News.

Contributors will get timely updates on big investigations and new programming from BuzzFeed News, a person familiar with the program said. If successful, it could be a prelude to a membership program with more perks, the person said, noting that the company has no plans to charge its readers for content.

In recent months, the company has tried out new money-making tactics, including the introduction of automated or “programmatic” ads, production deals with companies including Netflix Inc. and Twitter Inc., TWTR 4.70% and licensing of merchandise around brands like its Tasty food vertical.

“Following some of our peers in the industry, we see this as one more way to support our reporting and keep BuzzFeed News free for everyone,” said Matt Mittenthal, a spokesman for BuzzFeed News.

Executives at BuzzFeed news decided to launch the donation feature after observing other news organizations that have appealed to readers for support. The Guardian, a U.K.-based newspaper, raised $130 million from reader revenues from April 2016 to March 2017. BuzzFeed executives were also informed by research from the Google News Initiative that showed a portion of the company’s readers were likely to support its journalism.

The decision to launch a donate button on BuzzFeed News comes as the digital media company, founded in 2006, seeks to boost revenue growth. Last year, BuzzFeed missed its revenue target of about $350 million by about 15% to 20%, The Wall Street Journal reported, though its pace of growth far outstrips traditional media outlets.

As tech giants such as Alphabet Inc.’s Google, Facebook Inc. and Amazon.com Inc. siphon an ever-larger share of digital advertising dollars, news organizations are increasingly leaning on reader revenue to power growth. For many of them, this means launching or doubling down on subscription paywalls.

Please note: The Wall Street Journal News Department was not involved in the creation of the content above.

END_OF_DOCUMENT_TOKEN_TO_BE_REPLACED 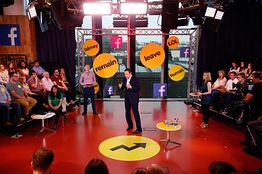 Digital-media company allows readers to donate between $5 and $100 to help pay for cost of newsroom; could be prelude to membership model

This article has been sent to