In a 1981 lecture, the physicist Richard Feynman discussed the challenge of simulating quantum systems on conventional computers1. The memory required on such a computer to accurately store the state of a quantum system consisting of many particles increases exponentially with the number of particles. Feynman therefore proposed instead to build a quantum computer — a computer based on quantum-mechanical elements. Although large-scale quantum computers are yet to be developed, special-purpose quantum simulators for studying specific quantum models have been built2,3. These simulators have been based on technologies such as ultracold atomic gases4, trapped ions5 and superconducting circuits6. Writing in Nature, King et al.7 report a quantum simulator based on 1,800 superconducting quantum bits (qubits) that is programmable, adding another technology to our portfolio of quantum simulators. 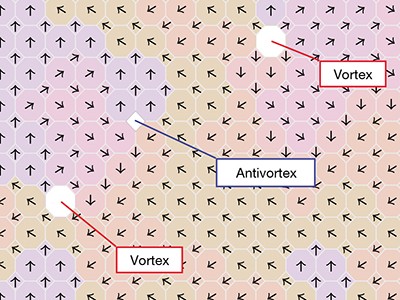 The qubits used by King and colleagues are made from loops of superconducting niobium metal8. The loops are designed in such a way that, at low (millikelvin) temperatures, there are two energetically favourable states: one in which a persistent electric current circulates around the loop in an anticlockwise direction, and one in which such a current circulates in a clockwise direction. These states can be associated with the ‘0’ and ‘1’ of an ordinary (classical) bit. Because of a phenomenon known as quantum tunnelling, a loop can exist in both states at the same time, turning the classical bit into a qubit.

King and colleagues’ device was originally designed to solve combinatorial optimization problems8, in which a set of variables each have to be assigned a value of either ‘0’ or ‘1’ with the goal of minimizing a particular function of these variables. Such problems can occur when, for example, deciding which manufacturing task to assign to which factory, finding the shortest route through a series of cities, and deciding in which assets to invest. These tasks all belong to a class of difficult computational problem for which no efficient classical algorithm exists.

It was therefore hoped that a quantum optimizer could help, by making use of quantum tunnelling to more efficiently explore the range of possible variable assignments. Experiments on previous generations of the authors’ device have demonstrated that quantum effects can be used to find solutions to optimization problems8. However, these devices were not shown to have advantages over classical algorithms for real-world optimization problems9.

In the current paper, King et al. used their device not for optimization tasks, but for its more promising ‘native’ function of simulating quantum systems. In a model of a quantum magnet, the ‘0’ and ‘1’ states of a qubit in the device could correspond to the magnetic moment of a localized electron pointing up or down.

The authors simulated a particular quantum-magnet model in which competing interactions between magnetic moments give rise to a phase of matter that can be described by moments pointing in any direction on a plane. At zero kelvin, all of these moments are aligned (Fig. 1a). However, at non-zero temperatures, features known as topological defects emerge. Two such defects are vortices and antivortices — points around which moments rotate clockwise or anticlockwise, respectively, when circling the point in a clockwise direction (Fig. 1b).

At low temperatures, defects show up as tightly bound pairs of vortices and antivortices. As the temperature is increased, the system undergoes a phase transition in which these pairs of defects unbind to form isolated vortices and antivortices10,11. Work on this transition resulted in the 2016 Nobel Prize in Physics. The phenomenon has been observed in liquid-helium films12, layered magnets13 and ultracold atomic gases14. King et al. realized the transition in their quantum simulator, suggesting that such devices could be used to study this transition and others in a variety of models.

As interesting as the observed phase transition is, the main strength and impact of the paper is not in the specific model, but rather in the demonstration that reliable programmable quantum simulators that have more than 1,000 qubits can be built. Previous generations of King and colleagues’ device had many defective qubits8,9, but the current study required a perfect array of working qubits. This requirement was met thanks to improvements in the authors’ fabrication technology over the past decade.

King and colleagues’ observations are consistent with state-of-the-art classical simulations, showing that the results obtained by such quantum simulators can be trusted. This is an exciting development, as I have argued previously that the authors’ device could have greater potential for quantum simulation than for optimization problems.

A limitation of the current device is that it can realize only what are known as stoquastic quantum models. These can be mapped to corresponding purely classical models and can, therefore, be simulated on classical computers. Although this mapping allows experiments to be compared to classical simulations, it limits the usefulness of the quantum simulator. To go beyond what is tractable on classical computers, two avenues of further development could be explored.

The first is to carry out quantum simulations of dynamical non-equilibrium effects, such as the propagation of excitations that occurs after the system of qubits is perturbed. Such effects are difficult to simulate classically, even in the case of stoquastic models. However, in contrast to quantum simulators built from dilute ultracold atomic gases or trapped ions, solid-state devices such as that made by the authors are subject to substantial environmental noise from lattice vibrations, and from electric-charge and magnetic-field fluctuations. This noise destroys the purely quantum evolution of the qubits. The design of qubits that have low sensitivity to noise will therefore be crucial for the study of quantum dynamics using solid-state quantum simulators.

The second direction for future development is to introduce other types of programmable interaction between the qubits that would realize non-stoquastic models for which no efficient classical simulators exist. Such models include those of frustrated quantum magnets, in which competing interactions give rise to unusual quantum phenomena, and to phases of matter that contain exotic types of excitation. A programmable quantum simulator for such models would open up entirely new approaches for studying complex quantum systems.