Could that juicy burger you're about to sink your teeth into contain viruses that cause colon cancer? Harald zur Hausen suspects so. The Nobel laureate contends that the consumption of beef-borne viruses carried by certain species of cattle could be contributing to rising colorectal cancer rates in some countries.

"At this moment there is no clear-cut data available," zur Hausen said in an interview from Singapore two weeks ago, where he attended the Global Young Scientists [email protected] 2015. "We are isolating viruses from cattle and trying to see whether they are linked to these types of cancers."

For now, the idea may seem remote. But in 1976, so did zur Hausen's theory that the human papillomavirus (HPV) was one of the key causes of cervical cancer.

It wasn't until 1983 that his research team was able to isolate HPV 16 and HPV 18 as the virus types responsible for cervical cancer. This eventually led to the development of a preventative cervical cancer vaccine that became widely available in 2006. For his discovery, zur Hausen was jointly awarded the 2008 Nobel Prize in physiology or medicine.

The 78-year-old German virologist and professor emeritus at the German Cancer Research Centre put forth his hypothesis about the cow virus at his Nobel lecture in December 2008 at Karolinska Institutet in Stockholm. In 2012, his paper that explained the reasons to suspect the cattle virus-colon cancer link was published in the International Journal of Cancer.

Since then zur Hausen has been relentless in the lab, using genetic sequencing to search for new viral sequences in blood from the Bos taurus species of cattle from Europe. His team has narrowed in on 18 different genetic sequences that might be evidence of a viral culprit, but at this stage it seems findings are only speculative.

Zur Hausen provides several solid reasons to back his suspicions. First, since 1977 chemical carcinogens produced during the cooking of red meat have been suggested as the causative agents of colorectal cancer. However, zur Hausen notes more recent studies show the same cooking processes - broiling, barbecuing or processing - done with poultry or fish produce similar quantities of these cancer-causing chemicals but do not increase the risk of colorectal cancer. 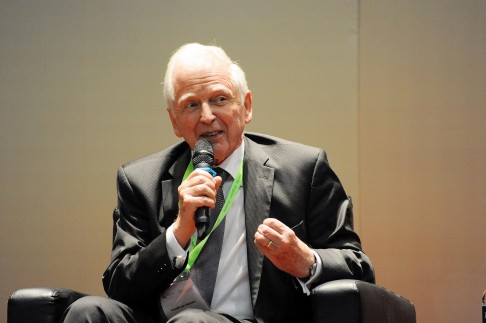 Second, zur Hausen found that the increased risk for red meat seems to be restricted to countries with a high rate of beef consumption. Countries with a high dietary intake of mutton and goat, such as Arabian states, have a relatively low incidence of colorectal cancer compared to North America, Europe and Australia. India, where beef is largely avoided due to religious reasons, has the lowest rate of colorectal cancers in the world.

Lastly, reviewing epidemiological studies on colorectal cancer in Japan and South Korea, zur Hausen found that the two countries had a dramatic increase in colon cancer rates starting from 1975, which was preceded by increasing imports of beef and pork and of dairy products from cattle. These two countries tended to eat their beef undercooked or rare. In particular, Korean yukhoe (or yukke in Japan), a dish of raw ground beef with spices or sauces and an egg yolk, was very popular - similar to a dish from Mongolia, where the colorectal cancer rate is relatively low.

Hopefully, there will be a new vaccine available in the future that covers all [HPV] types

Zur Hausen posited that the theoretically suspected viral agents in beef survive without any significant loss in activity in temperatures of about 40 to 70 degrees Celsius. Explaining the low colorectal cancer rate in Mongolia, he suggested that they had meat predominantly from a different species of cattle - yak (Bos mutus) - rather than European cattle (Bos taurus).

These reasons combined, says zur Hausen, support the hypothesis of a cow virus that's linked to colon cancer - with less specific but probably important contributions of chemical carcinogens as well as hereditary factors.

If one day scientists do find a virus that causes colorectal cancer, then 35 per cent of the world's cancer cases could be traced back to an infection. At present, slightly more than 20 per cent of the global cancer burden can be linked to infectious agents, says zur Hausen, including hepatitis B and C with liver cancer, Epstein-Barr virus with Burkitt's lymphoma and nasopharyngeal cancer, human herpes virus type 8 with Kaposi's sarcoma, and, of course, zur Hausen's discovery of HPV with cervical cancer.

Cervical cancer is the second most common cancer in women, with an estimated 530,000 new cases and about 270,000 deaths in 2012, according to the World Health Organisation.

There are more than 200 genotypes of HPV, says zur Hausen, of which between 13 and 50 types cause cervical cancer. At present, HPV vaccines target nine virus types, which cover more than 90 per cent of cervical cancer cases.

"Hopefully, there will be a new vaccine available in the future that covers all types, including subcutaneous papillomavirus types," says zur Hausen. The vaccines work best if given prior to exposure to HPV; hence it's preferable to administer them before first sexual activity.

In Hong Kong, statistics show the take-up rate of the HPV vaccine is low. In a survey in 2013 by Chinese University of more than 3,000 parents of students from about 30 secondary schools, only 5 per cent of schoolgirls had received the HPV vaccine.

Cost is a factor. The vaccine requires three doses over a period of six months, and each dose costs about HK$1,000 to HK$1,500. Zur Hausen thinks the cost can go down if health officials negotiate with pharmaceutical companies to reduce prices.

What could help encourage more girls to get vaccinated? Zur Hausen thinks more awareness and education of the consequences of cervical cancer can help. He says between 1 per cent and 5 per cent of HPV-infected women will eventually develop cervical cancer.

"I think women should know the consequences of removal of precursor lesions on the one hand, and secondly of the treatment of cervical cancer itself, because in both cases a number of complications may arise," he says.

"And cervical cancer still has a relatively high mortality rate, so mothers should tell their daughters of the risks to which they are exposed. This is not only the question of the parents, but also of doctors and health officials. They should be aware of the risks of these kinds of infections."

He also suggests that males be vaccinated because they transmit the virus efficiently.

When zur Hausen qualified as a doctor in 1960, the role of viruses in human cancers was unknown. But as a student at the University of Dusseldorf, he'd already developed an interest in the infectious causes of cancer.

In the many years he spent trying to identify and isolate the cervical cancer viruses, he received a lot of criticism whenever he mentioned it. His stubbornness, however, meant the words never hurt him.

He'll continue his search to confirm his cow virus-colon cancer hypothesis. Don't count on him ever shunning beef, though. "I've never been a vegetarian and I probably will never be a vegetarian in the future," says zur Hausen, "because at my age, any type of consumption of dangerous food doesn't play a role any more."