Monitoring and Observability in the .NET Runtime

.NET is a managed runtime, which means that it provides high-level features that ‘manage’ your program for you, from Introduction to the Common Language Runtime (CLR) (written in 2007):

The runtime has many features, so it is useful to categorize them as follows:

You can see that ‘Debugging/Profiling’, whilst not a Fundamental or Secondary feature, still makes it into the list because of a ‘desire to create a complete programming environment’.

The rest of this post will look at what Monitoring, Observability and Introspection features the Core CLR provides, why they’re useful and how it provides them.

To make it easier to navigate, the post is split up into 3 main sections (with some ‘extra-reading material’ at the end):

Firstly we are going to look at the diagnostic information that the CLR provides, which has traditionally been supplied via ‘Event Tracing for Windows’ (ETW).

There is quite a wide range of events that the CLR provides related to:

For example this is where the AppDomain Load event is fired, this is the Exception Thrown event and here is the GC Allocation Tick event.

If you want to see the ETW Events coming from your .NET program I recommend using the excellent PerfView tool and starting with these PerfView Tutorials or this excellent talk PerfView: The Ultimate .NET Performance Tool. PerfView is widely regarded because it provides invaluable information, for instance Microsoft Engineers regularly use it for performance investigations.

However, in case it wasn’t clear from the name, ETW events are only available on Windows, which doesn’t really fit into the new ‘cross-platform’ world of .NET Core. You can use PerfView for Performance Tracing on Linux (via LTTng), but that is only the cmd-line collection tool, known as ‘PerfCollect’, the analysis and rich UI (which includes flamegraphs) is currently Windows only.

But if you do want to analyse .NET Performance Linux, there are some other approaches:

The 2nd link above discusses the new ‘EventPipe’ infrastructure that is being worked on in .NET Core (along with EventSources & EventListeners, can you spot a theme!), you can see its aims in Cross-Platform Performance Monitoring Design. At a high-level it will provide a single place for the CLR to push ‘events’ related to diagnostics and performance. These ‘events’ will then be routed to one or more loggers which may include ETW, LTTng, and BPF for example, with the exact logger being determined by which OS/Platform the CLR is running on. There is also more background information in .NET Cross-Plat Performance and Eventing Design that explains the pros/cons of the different logging technologies.

All the work being done on ‘Event Pipes’ is being tracked in the ‘Performance Monitoring’ project and the associated ‘EventPipe’ Issues.

Finally, there are also future plans for a Performance Profiling Controller which has the following goal:

The controller is responsible for control of the profiling infrastructure and exposure of performance data produced by .NET performance diagnostics components in a simple and cross-platform way.

The idea is for it to expose the following functionality via a HTTP server, by pulling all the relevant data from ‘Event Pipes’:

I’m excited to see where the ‘Performance Profiling Controller’ (PPC?) goes, I think it’ll be really valuable for .NET to have this built-in to the CLR, it’s something that other runtimes have.

Another powerful feature the CLR provides is the Profiling API, which is (mostly) used by 3rd party tools to hook into the runtime at a very low-level. You can find our more about the API in this overview, but at a high-level, it allows your to wire up callbacks that are triggered when: 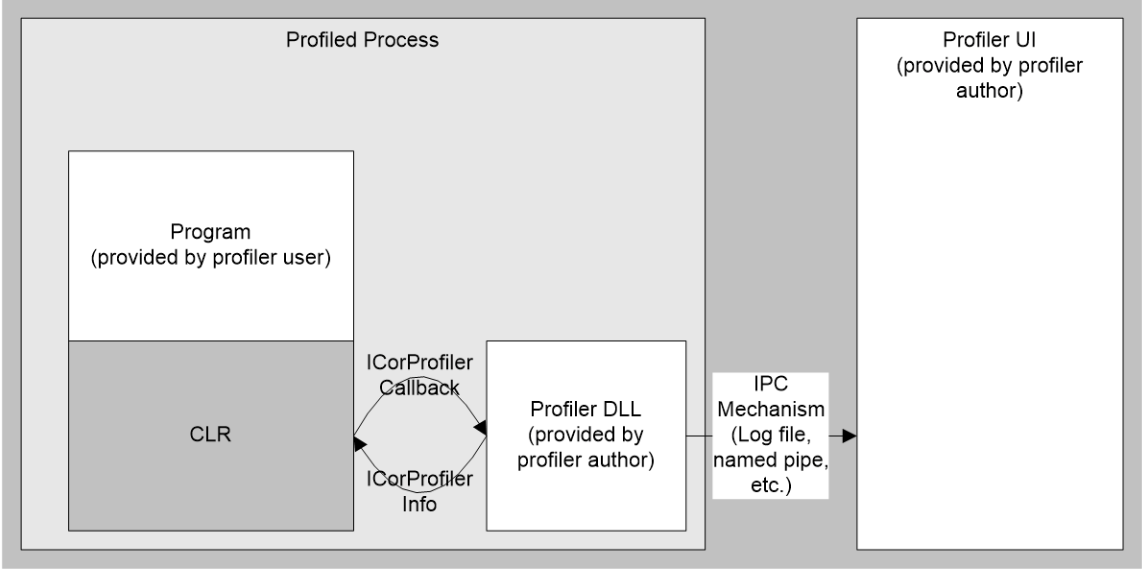 In addition is has other very power features. Firstly you can setup hooks that are called every time a .NET method is executed whether in the runtime or from users code. These callbacks are known as ‘Enter/Leave’ hooks and there is a nice sample that shows how to use them, however to make them work you need to understand ‘calling conventions’ across different OSes and CPU architectures, which isn’t always easy. Also, as a warning, the Profiling API is a COM component that can only be accessed via C/C++ code, you can’t use it from C#/F#/VB.NET!

Secondly, the Profiler is able to re-write the IL code of any .NET method before it is JITted, via the SetILFunctionBody() API. This API is hugely powerful and forms the basis of many .NET APM Tools, you can learn more about how to use it in my previous post How to mock sealed classes and static methods and the accompanying code.

It turns out that the run-time has to perform all sorts of crazy tricks to make the Profiling API work, just look at what went into this PR Allow rejit on attach (for more info on ‘ReJIT’ see ReJIT: A How-To Guide).

The overall definition for all the Profiling API interfaces and callbacks is found in \vm\inc\corprof.idl (see Interface description language). But it’s divided into 2 logical parts, one is the Profiler -> ‘Execution Engine’ (EE) interface, known asICorProfilerInfo:

Which is implemented in the following files:

The other main part is the EE -> Profiler callbacks, which are grouped together under the ICorProfilerCallback interface:

These callbacks are implemented across the following files:

Finally, it’s worth pointing out that the Profiler APIs might not work across all OSes and CPU-archs that .NET Core runs on, e.g. ELT call stub issues on Linux, see Status of CoreCLR Profiler APIs for more info.

As a quick aside, ‘Profiling’ and ‘Debugging’ do have some overlap, so it’s helpful to understand what the different APIs provide in the context of the .NET Runtime, from CLR Debugging vs. CLR Profiling 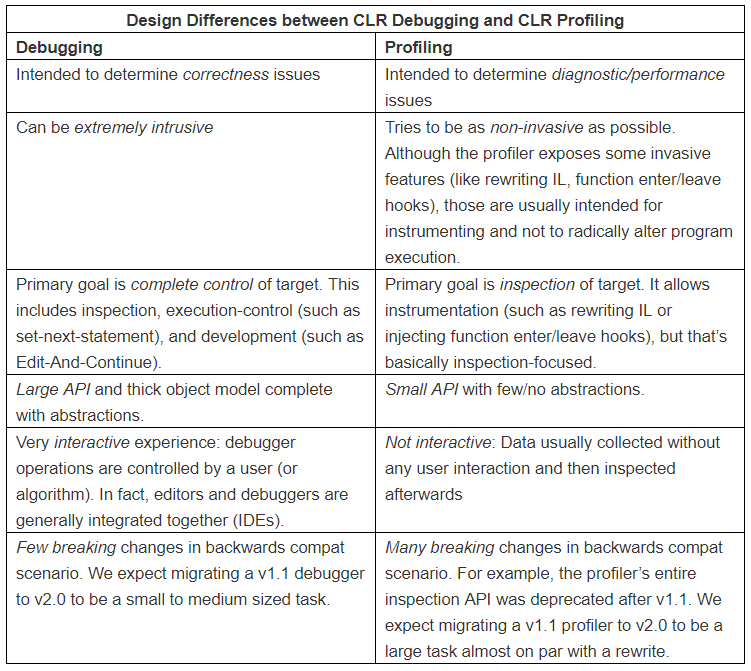 Debugging means different things to different people, for instance I asked on Twitter “what are the ways that you’ve debugged a .NET program” and got a wide range of different responses, although both sets of responses contain a really good list of tools and techniques, so they’re worth checking out, thanks #LazyWeb!

But perhaps this quote best sums up what Debugging really is 😊

Debugging is like being the detective in a crime movie where you are also the murderer.

The CLR provides a very extensive range of features related to Debugging, but why does it need to provide these services, the excellent post Why is managed debugging different than native-debugging? provides 3 reasons:

So to give a decent experience, the CLR has to provide the higher-level debugging API known as ICorDebug, which is shown in the image below of a ‘common debugging scenario’ from the BOTR:

In addition, there is a nice description of how the different parts interact in How do Managed Breakpoints work?, although the descriptions of left and right are the opposite of the diagram above!

But how is all this implemented and what are the different components, from CLR Debugging, a brief introduction:

All of .Net debugging support is implemented on top of a dll we call “The Dac”. This file (usually named mscordacwks.dll) is the building block for both our public debugging API (ICorDebug) as well as the two private debugging APIs: The SOS-Dac API and IXCLR.

In a perfect world, everyone would use ICorDebug, our public debugging API. However a vast majority of features needed by tool developers such as yourself is lacking from ICorDebug. This is a problem that we are fixing where we can, but these improvements go into CLR v.next, not older versions of CLR. In fact, the ICorDebug API only added support for crash dump debugging in CLR v4. Anyone debugging CLR v2 crash dumps cannot use ICorDebug at all!

The ICorDebug API is actually split up into multiple interfaces, there are over 70 of them!! I won’t list them all here, but I will show the categories they fall into, for more info see Partition of ICorDebug where this list came from, as it goes into much more detail.

One other note, as with the Profiling APIs the level of support for the Debugging API varies across OS’s and CPU architectures. For instance, as of Aug 2018 there’s “no solution for Linux ARM of managed debugging and diagnostic”. For more info on ‘Linux’ support in general, see this great post Debugging .NET Core on Linux with LLDB and check-out the Diagnostics repository from Microsoft that has the goal of making it easier to debug .NET programs on Linux.

Finally, if you want to see what the ICorDebug APIs look like in C#, take a look at the wrappers included in CLRMD library, include all the available callbacks (CLRMD will be covered in more depth, later on in this post).

SOS and the DAC

The ‘Data Access Component’ (DAC) is discussed in detail in the BOTR page, but in essence it provides ‘out-of-process’ access to the CLR data structures, so that their internal details can be read from another process. This allows a debugger (via ICorDebug) or the ‘Son of Strike’ (SOS) extension to reach into a running instance of the CLR or a memory dump and find things like:

Quick aside, if you want an explanation of all the strange names and a bit of a ‘.NET History Lesson’ see this Stack Overflow answer.

The full list of SOS Commands is quite impressive and using it along-side WinDBG allows you a very low-level insight into what’s going on in your program and the CLR. To see how it’s implemented, lets take a look at the !HeapStat command that gives you a summary of the size of different Heaps that the .NET GC is using:

Here’s the code flow, showing how SOS and the DAC work together:

Because Microsoft published the debugging API it allowed 3rd parties to make use of the use of the ICorDebug interfaces, here’s a list of some that I’ve come across:

The final area we are going to look at is ‘memory dumps’, which can be captured from a live system and analysed off-line. The .NET runtime has always had good support for creating ‘memory dumps’ on Windows and now that .NET Core is ‘cross-platform’, the are also tools available do the same on other OSes.

One of the issues with ‘memory dumps’ is that it can be tricky to get hold of the correct, matching versions of the SOS and DAC files. Fortunately Microsoft have just released the dotnet symbol CLI tool that:

can download all the files needed for debugging (symbols, modules, SOS and DAC for the coreclr module given) for any given core dump, minidump or any supported platform’s file formats like ELF, MachO, Windows DLLs, PDBs and portable PDBs.

Finally, if you spend any length of time analysing ‘memory dumps’ you really should take a look at the excellent CLR MD library that Microsoft released a few years ago. I’ve previously written about what you can do with it, but in a nutshell, it allows you to interact with memory dumps via an intuitive C# API, with classes that provide access to the ClrHeap, GC Roots, CLR Threads, Stack Frames and much more. In fact, aside from the time needed to implemented the work, CLR MD could implement most (if not all) of the SOS commands.

But how does it work, from the announcement post:

The ClrMD managed library is a wrapper around CLR internal-only debugging APIs. Although those internal-only APIs are very useful for diagnostics, we do not support them as a public, documented release because they are incredibly difficult to use and tightly coupled with other implementation details of the CLR. ClrMD addresses this problem by providing an easy-to-use managed wrapper around these low-level debugging APIs.

By making these APIs available, in an officially supported library, Microsoft have enabled developers to build a wide range of tools on top of CLRMD, which is a great result!

So in summary, the .NET Runtime provides a wide-range of diagnostic, debugging and profiling features that allow a deep-insight into what’s going on inside the CLR.

Where appropriate I’ve included additional links that covers the topics discussed in this post.