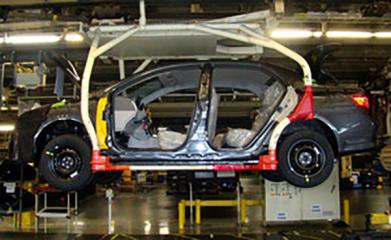 Today we have this story for you about cars-- American cars. And like most stories about American cars lately, it's more tragedy than comedy, though there is some comedy in there, too. It's the story of a factory in California that captures pretty much everything that's gone wrong in the American car business in the last 30 years. And at the heart of the story is the question, why are American cars still not as good as foreign cars?

Come with me for just a half minute to the Detroit Auto Show, OK? David Champion is one of the umpires who calls strikes and fouls in the car business. He's the senior director of Consumer Reports auto test division. He says that Ford has actually been improving for the last six or seven years, but Chrysler's still in the dumps, the worst of all the car makers they study, and as for America's biggest car maker, GM?

Why hasn't GM got it yet? It's not like this reliability problem just snuck up on them. It's been nearly 50 years since it started losing market share-- 50 years since it began the slide from holding over half the US car market, back in the '60s, to just 22% today. Here's an amazing fact. Even after Toyota's recent disaster with suddenly accelerating cars that killed possibly 52 people, Consumer Reports came out with new ratings just this month and it still rates Toyota as more reliable than all the American car makers.

That's because the ratings are based on overall dependability-- the likelihood of whether you'll have a problem with your Toyota, and mostly, they are still very reliable cars. In fact, the top three automakers in the most recent Consumer Reports survey are all Japanese-- Toyota is number three-- and the top 10 are all foreign.

Why is it taking so long for Detroit to figure out how to make a car as good as the Japanese? Well, there's some very interesting answers to that question, and all of them can be found right here-- at a car plant in Fremont, California, called NUMMI. NUMMI stands for New United Motor Manufacturing Incorporated.

A modern car plant, by the way, sounds a lot like a casino. The automated gear plays little songs to let you know that it's running. Driver-less robot carts glide up and down the aisles, like R2D2, delivering doors and other parts. Their song is supposed to warn you that they're coming. The story of this factory is a famous one among car people-- it's taught at business schools.

NUMMI was opened in 1984 by GM and Toyota together, who decided this would be a place that they would build cars with each other. If it seems strange to you that two competitors would do this, it seemed strange at the time, also. A headline in Car and Driver about the partnership read, "Hell Freezes Over." But both companies had their reasons-- we'll get into that.

At NUMMI, Toyota showed GM all its secrets-- exactly how it made some of the best built, most reliable cars in the world back then. GM hoped to take these lessons from NUMMI and carry them into all their other plants, all over the country, and all over the world. And then, well, that didn't go so well, and here we are today. GM went bankrupt. US taxpayers-- you and I-- bailed them out for $50 billion.

And next week, the NUMMI car plant, the one that seemed like it might be able to teach American car makers how to catch up to their competitors, is going to stop making cars. It's happening, no joke, on April Fools' Day. Today we have a special story for you. We are devoting our entire show to it.

For the last couple months, NPR's automotive correspondent, Frank Langfitt and one of our producers, Brian Reed, have been traveling around the country talking to GM workers and managers about what happened at NUMMI, and especially about what went wrong at GM that it had so much trouble for so long adopting the techniques it learned over a quarter century ago.

General Motors and the UAW are secretive cultures, but as you'll hear, people were blunt when they talked to Frank-- blunt in a way that you rarely hear with auto executives and UAW reps when they're being interviewed by the press. Act one of our show is about the rise of NUMMI, act two is about what prevented GM from learning from NUMMI.

From WBEZ Chicago, it's This American Life, distributed by Public Radio International. I'm Ira Glass. Our show today produced with our colleagues at NPR News. And now it is my pleasure to turn the story over to NPR automotive correspondent, Frank Langfitt.