J.P. Morgan Chase is about to lob a grenade into the increasingly competitive world of retail investing.

The bank is rolling out a digital investing service next week that comes bundled with free or discounted trades, a sophisticated portfolio-building tool and no-fee access to the bank's stock research. Anyone who downloads J.P. Morgan's mobile banking app or uses its website can get at least 100 free trades in the first year.

The move, more than two years in the making, instantly intensifies the price war that is occurring throughout the investing landscape. Whether it's executing trades, managing portfolios or simply owning mutual funds and ETFs, costs have been collapsing on Wall Street. Among brokerages, the free trading app provided by Robinhood Markets has gained attention recently for attracting more than 5 million users, and a $5.6 billion valuation, in just a few years.

But J.P. Morgan, the biggest U.S. bank, has a distinct advantage over many competitors: It already has financial ties with half of American households. When its engineers flip a switch in coming days, more than 47 million people who already use the company's banking app or website will gain access to the new service, called You Invest.

"There are customers out there who may not want to trust their credentials or their money to an app of the month," said Jed Laskowitz, a J.P Morgan veteran who runs You Invest. "We're thinking about what's right for our customers, helping them get invested, and stay invested and diversified." 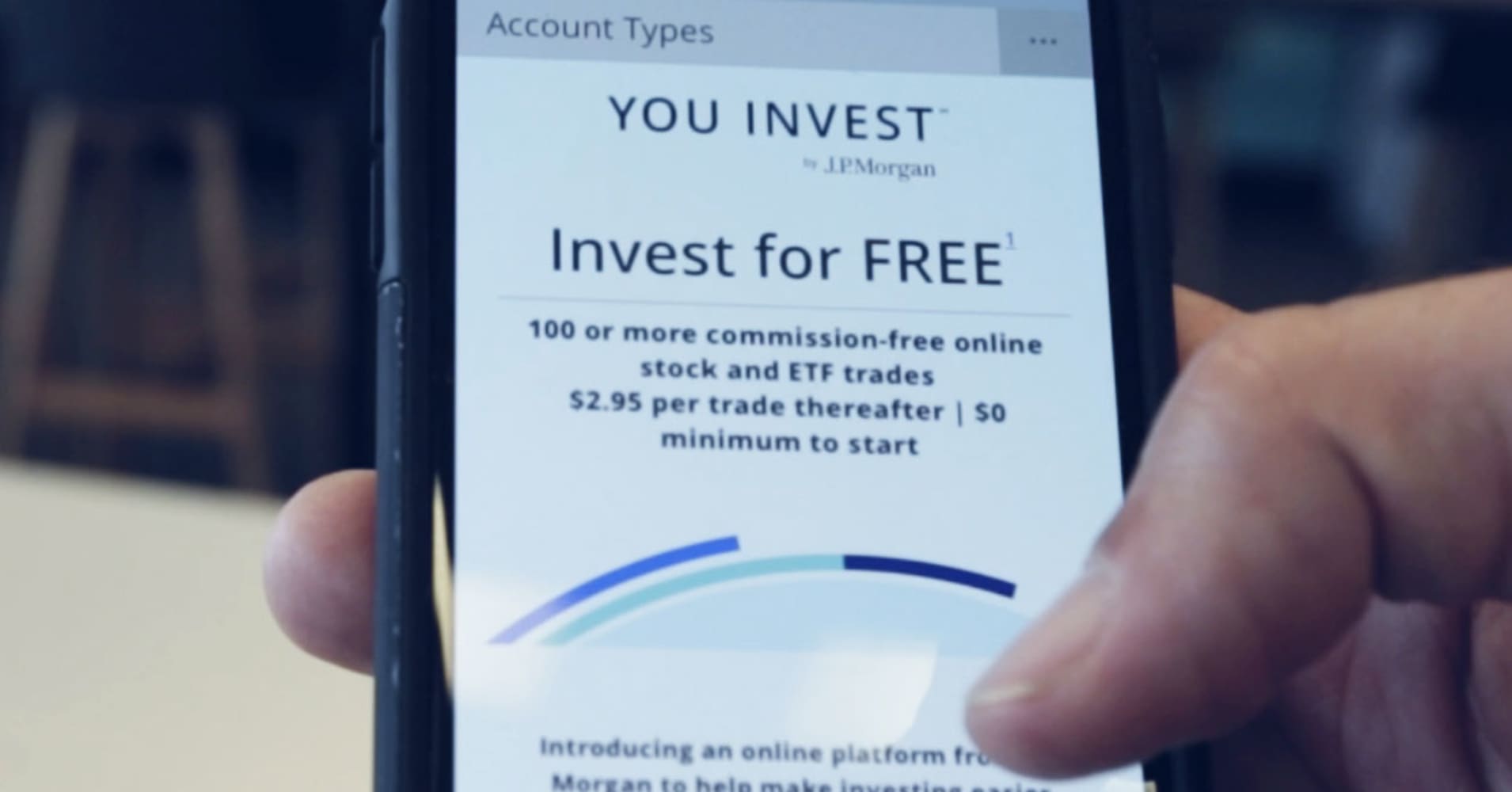 The move is a remarkable turnaround for a bank that charged $24.95 for online trades as recently as last year. Still, the industry has been expecting something disruptive from the New York-based company for some time. In June 2016, Chief Executive Officer Jamie Dimon hinted that he was considering no-cost brokerage trades or a free automated investing program. His inspiration: Amazon Prime and its hodgepodge of free services.

"If you're a good account, it's no different than Jeff Bezos doing the $99 Prime and adding services to it," Dimon said at the 2016 investor conference.

Under Dimon, J.P. Morgan has aggressively gone after market share in businesses from institutional trading to deposits, causing industrywide ripples when it deems the opportunities are worthwhile. One example: The bank caused a stir in 2016 with its Sapphire Reserve credit card that came with a 100,000 point sign-on bonus. Thanks in part to that move, the industry is still in the throes of a credit card rewards war.

With You Invest, J.P. Morgan is targeting two broad groups, according to Kelli Keough, global head of digital wealth management. The first are people who have never invested before, including millennials, and who may be overwhelmed with the sheer number of investment choices, she said. The second group are people who have a Chase account but invest elsewhere.

"Folks that are new to investing, there's a perception that trading is expensive," said Keough, who joined the bank from Charles Schwab in 2015. "We wanted to lower the hurdles. We wanted to help people invest without cost being an issue, and to reward people who are doing more business with us."

In early trials, You Invest users are 15 years younger on average than clients of the bank's human financial advisors, Keough said. The overwhelming majority, 90 percent, haven't invested with J.P. Morgan before, she said.

Signing up through the bank's app can be done in three minutes, and moving money between Chase accounts happens instantaneously. Users can also seamlessly fund their investments from outside accounts. There is no minimum required to open an account.

All customers get 100 free stock or ETF trades in the first year, an offer that becomes permanent for those with Premier-level bank accounts, which require a combined $15,000 held at the bank.

Those with Chase Private Client, a higher account that typically requires at least $100,000 in holdings, get unlimited trades. The bank is currently considering adding other tiers that would incentivize people to pull money from other brokerages.

Users can construct diversified portfolios with an automated tool called portfolio builder by inputting their risk tolerance and objectives. In a recent demonstration, a client was able to quickly screen through ETFs — most of which came from competitors including Vanguard — and construct a portfolio composed of cheap ETFs and a few stocks.

The number of free trades a user has left is prominently displayed on the app. Keough said that most investors don't typically need more than 100 trades a year, but if they exceed that amount, they'll be charged $2.95 per trade, which still undercuts most rivals.

For instance, TD Ameritrade and E-Trade charge $6.95 per trade. Charles Schwab charges $4.95 a trade. All three offer free trades for a fixed amount of time for new clients who deposit enough money. Bank of America offers customers of its Merrill Edge service 30 free trades per month, but that perk begins at $50,000 in balances. Otherwise, trades cost $6.95.

Shares of TD Ameritrade, Schwab and other online brokers declined on Tuesday.

The next phase for J.P Morgan is for investors who want to be more hands off. Start-ups including Wealthfront and Betterment pioneered the so-called robo-advisor, or automated investment managers. Big banks including Morgan Stanley and Wells Fargo have since released their own robo-advisors. Most charge between 0.25 to 0.50 percent of assets under management per year.

J.P. Morgan will unveil its own robo-advisor under the You Invest brand in January, Laskowitz said. He declined to say whether the bank will make good on Dimon's threat from 2016 to give away the service for free.

"If you think about our pricing structure, it will be very similar with what we're doing with our brokerage platform," Laskowitz said of the robo-advisor. "We're rewarding people for doing more with Chase."