How Amsterdam’s Airport Is Fighting Noise Pollution With Land Art

Amsterdam’s Schiphol Airport, located just 9 km southwest of the city, is the third busiest airport in Europe and one of the busiest in the world. In an average year, more than 63 million passengers pass through Schiphol in as many as 479,000 flights to and from various international destinations. That’s an average of about 1,300 flights every day, or nearly a flight every minute. In other words, Schiphol is very busy and very loud.

When the Dutch military first built a landing strip here in 1916, they chose the site because it was a polder —a broad and flat lowland that used to be the bed of a vast lake. Over the decades the flat expanse of the Haarlemmermeer polder became one of the most densely populated areas of the country, and the noise produced by the airport became an annoying problem for the residents. 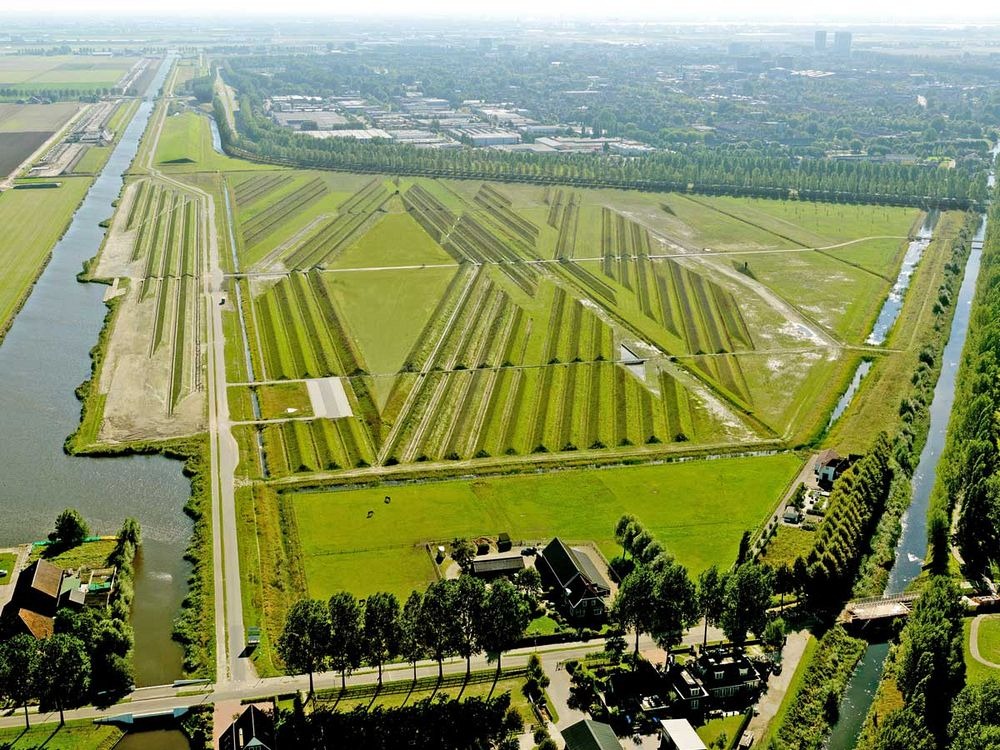 For years, residents complained about the incessant rumbling din produced every time an aircraft took off. This type of noise, called ground-level noise, propagates across the flat and featureless Haarlemmermeer landscape that has nothing in between—no hills, no valleys— to disrupt the path of the sound waves. When the airport opened its longest runway in 2003, residents could hear the din more than 28 km away.

The idea to engage a landscape artist to solve a technical problem was born out of an accident. In 2008, after a failed attempt to control noise, the Schiphol Airport officials discovered that after the arable land between the runway and the surrounding settlements were ploughed, the noise dropped.

So Paul De Kort dug a series of hedges and ditches on the southwest of the airport, just past the edge of the runway. The distance between the ridges are roughly equivalent to the wavelength of the airport noise, which is about 36 feet. There are 150 perfectly straight and symmetrical furrows with six foot high ridges between them. These simple ridges have reduced noise levels by more than half. 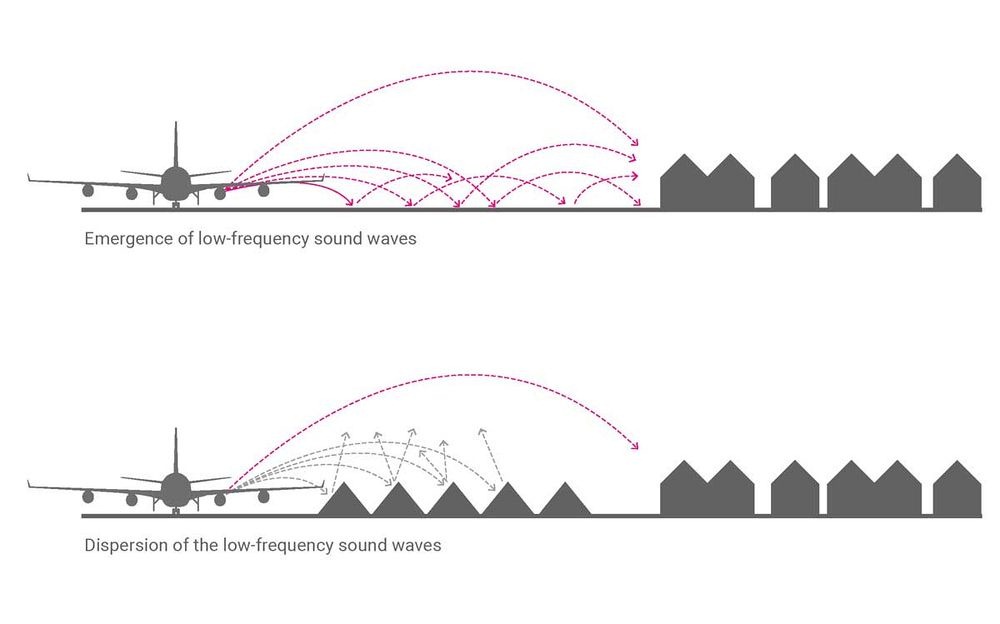 Paul De Kort drew on the experiences of an 18th century German physicist and musician named Ernst Chladni, whose research into the physics of sound laid the groundwork for modern acoustic science. He is sometimes referred to as ‘the father of acoustics’. In one of his most famous experiments, Chladni sprinkled salt or sand across a metal plate and subjected it to vibration causing the grains to arrange themselves into geometric patterns and ridges. Today, we call them Chladni figures.

Paul De Kort’s landscaping work around Amsterdam Airport Schiphol eventually became a 36-hectare park called Buitenschot. Various paths run through the park area. There’s a paved bicycle lane in the center and a paved footpath crosses the park. The most informal network is created by the grassy and cut paths between the ridges. De Kort also incorporated a number of art pieces within the park, such as the “Listening Ear,” a parabolic dish that amplifies sound coming from far away, and “Chaldnipond”, a diamond-shaped pond with a bridge and a mechanism underneath it which can create waves in the water.

The airport is trying to cut down noise even further by changing when certain planes can take off and requiring airlines to update their fleets. The plan is to achieve a noise reduction of up to 10 decibels. 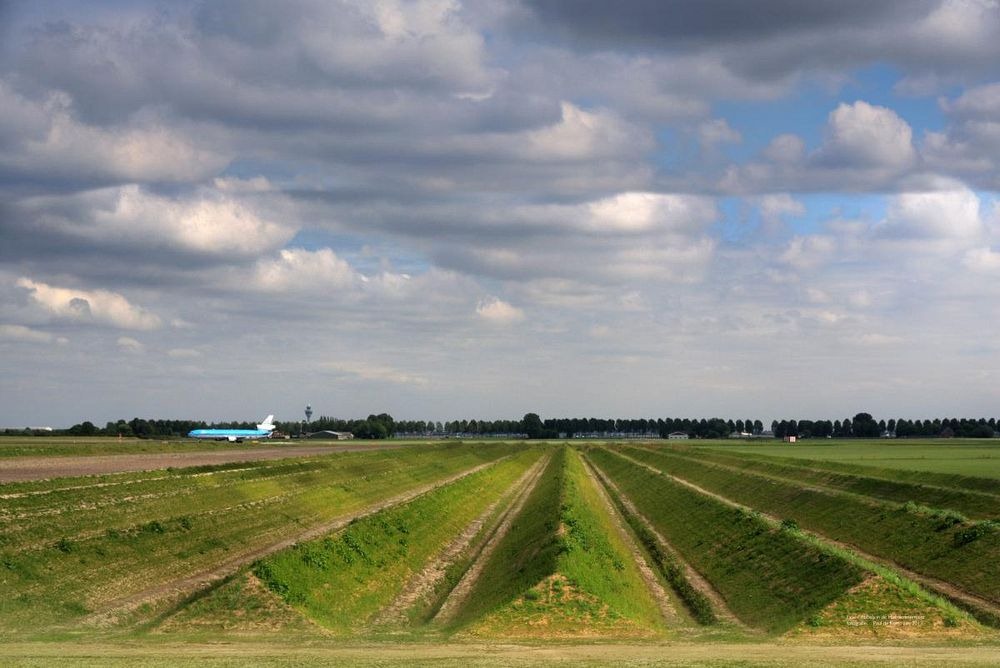 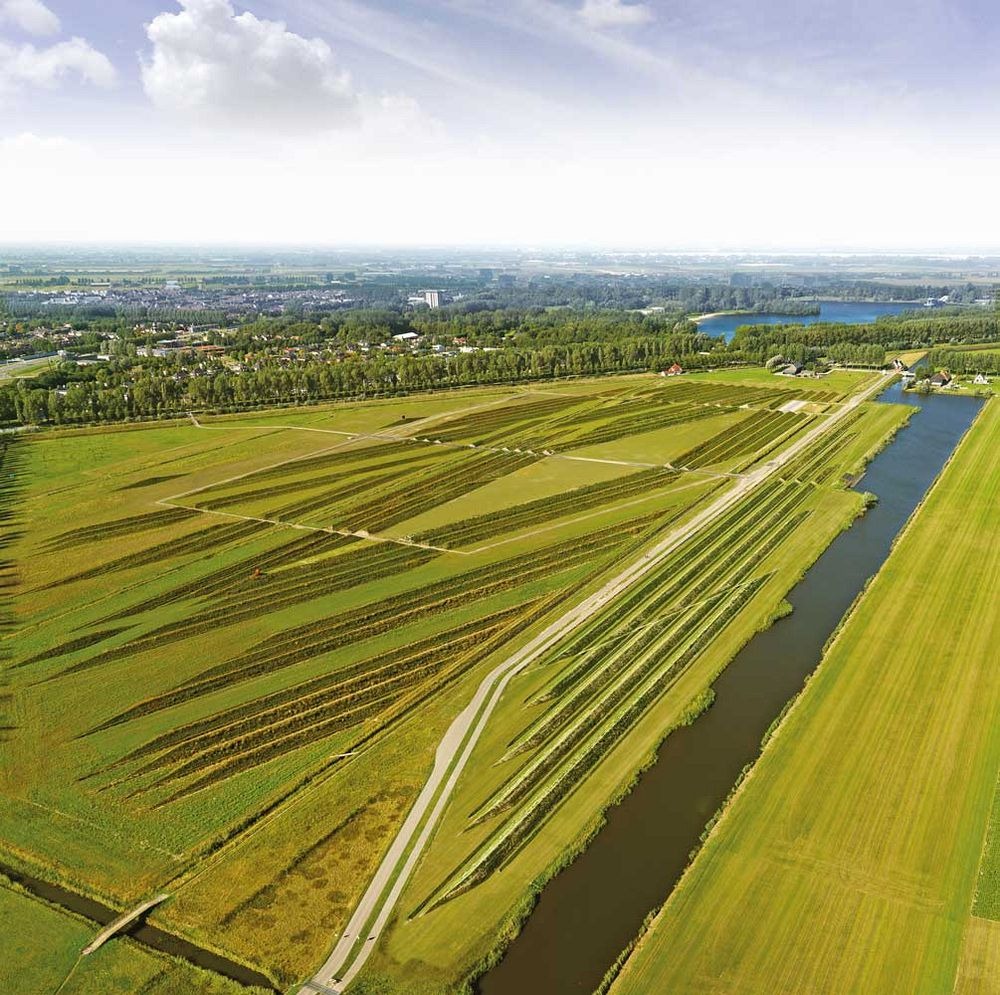 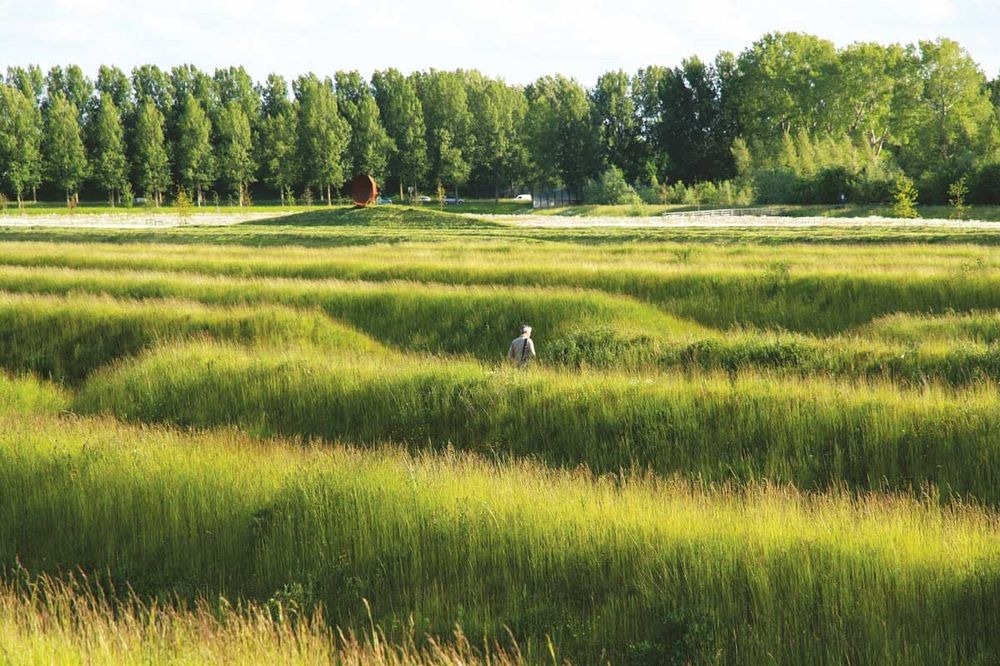 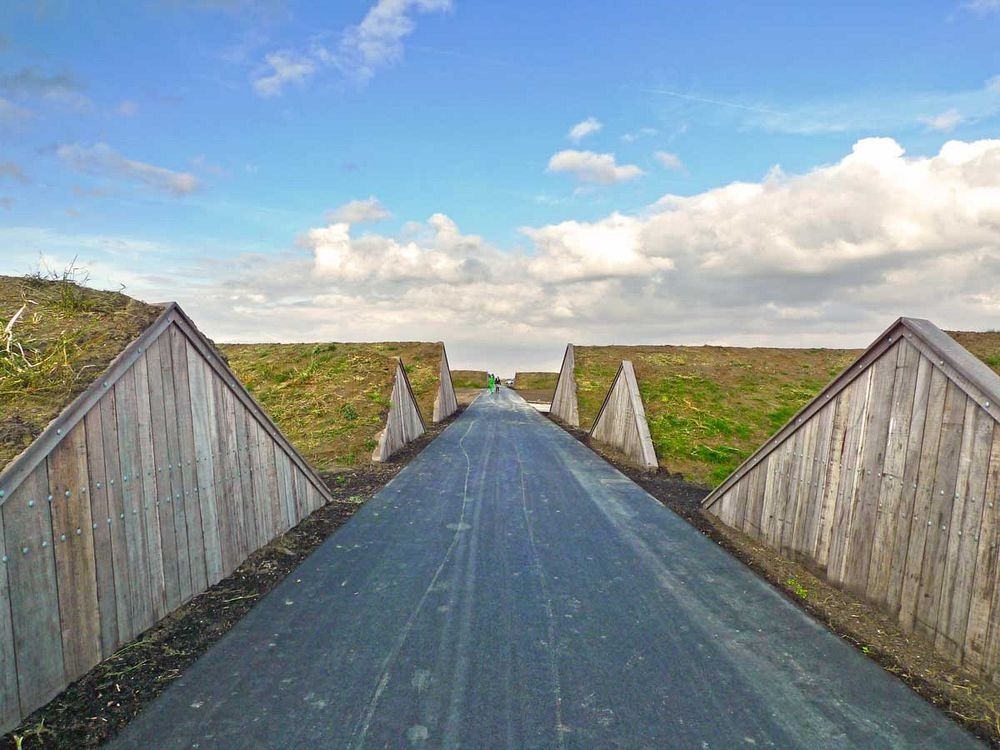 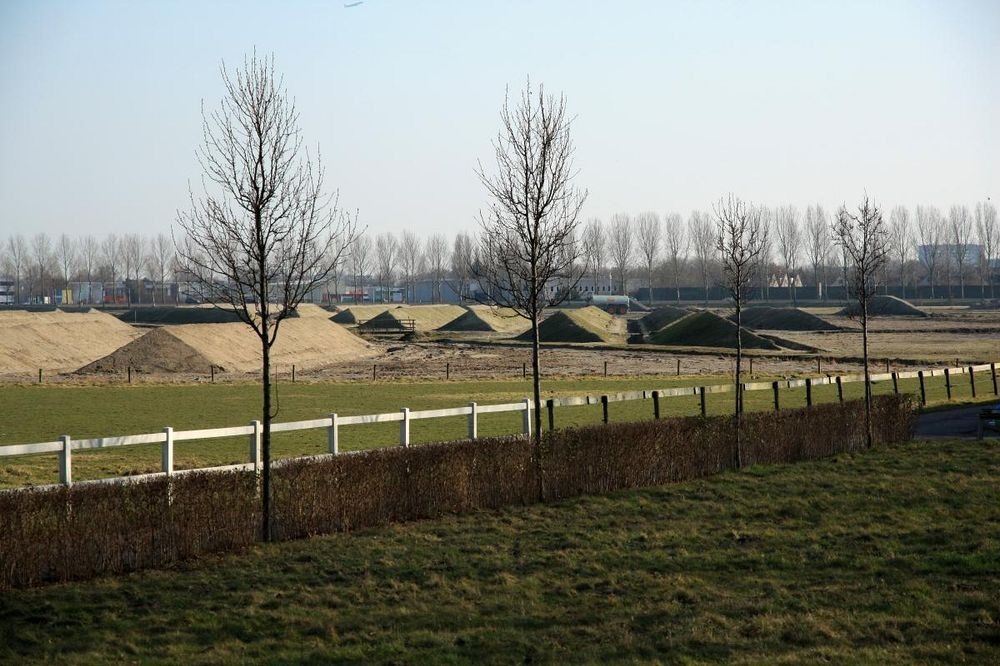 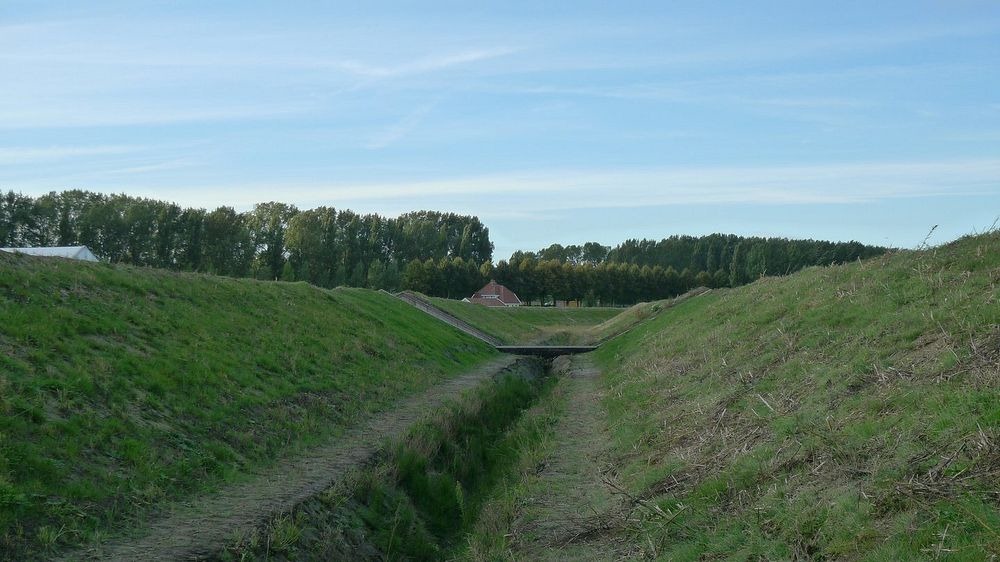