Home-grown Chinese technology from blockchain payment systems to green-powered cars were put on display on Saturday as the Malaysian Prime Minister Mahathir Mohamad kicked off his keenly watched five-day visit to China with tours of the Hangzhou headquarters of Alibaba Group and carmaker Geely.

The 93-year-old leader has said adopting technology from the likes of China and Japan is crucial to achieving the economic reform he promised to deliver before his watershed election victory in May.

Observers are closely watching Mahathir’s visit for clues about the future of bilateral ties between the two countries amid some uncertainty fuelled by his criticism of Chinese infrastructure projects in Malaysia he had deemed unnecessary and too expensive. Among the most keenly anticipated aspects of the trip’s agenda will be his meetings with Premier Keqiang and President Xi Jinping. 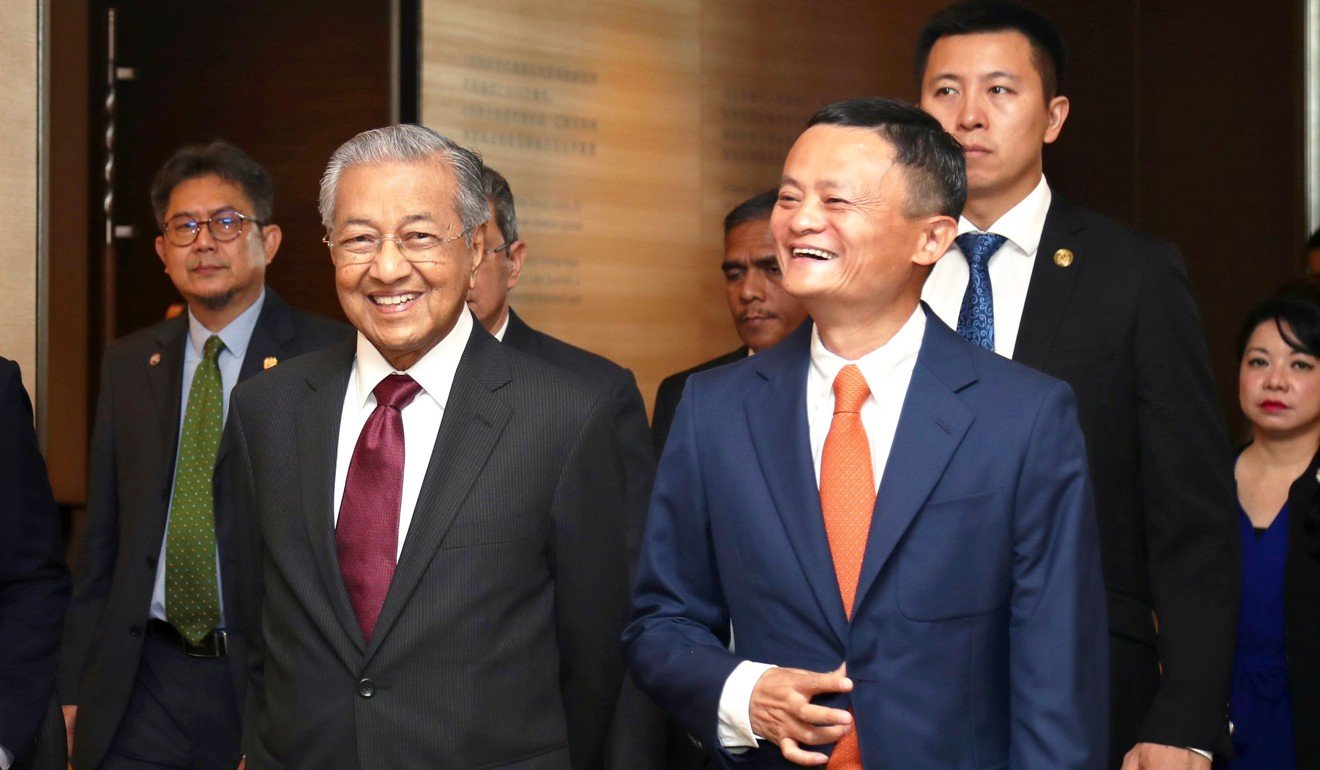 At Alibaba’s sprawling Xixi Park campus in the morning, Mahathir told the Chinese conglomerate’s co-founder Jack Ma that his country was keen on adopting its various hi-tech platforms to bolster economic growth.

“What you have achieved is quite fantastic … we’d like to tap your idea of modern technology for the benefit of the people” the Malaysian leader told Ma after an hour-long briefing on the Chinese firm’s latest ventures. 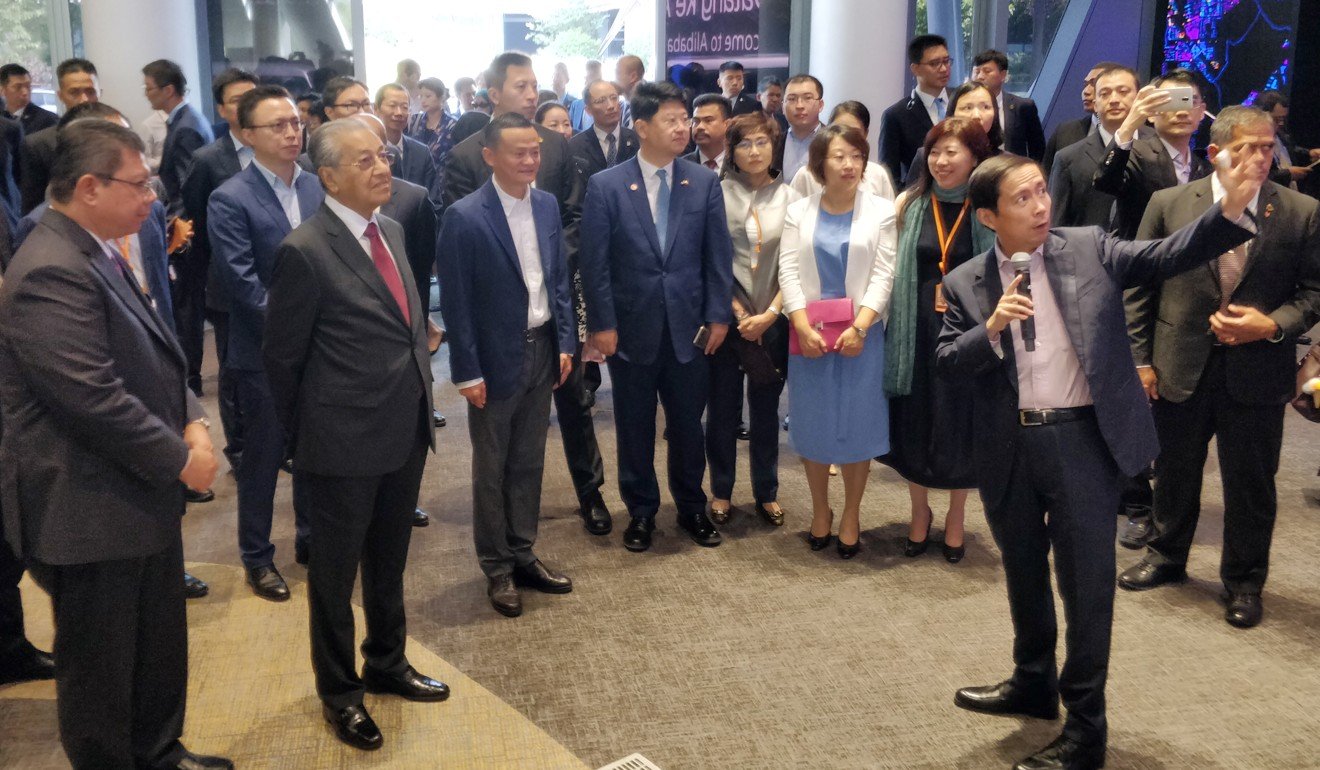 The Malaysian leader, accompanied by a delegation that included his wife Siti Hasmah Mohamad Ali, Foreign Minister Saifuddin Abdullah and Trade and Industry Minister Darell Leiking, was all ears during presentations by Alibaba’s head honchos.

Halfway through a presentation by Ant Financial President Eric Jing on the Alipay digital payment system’s international use, the veteran politician said he was curious how the technology could be used at Malaysia’s borders to assess whether incoming Chinese travellers had adequate funds for their trip.

Ma immediately chimed in, suggesting that Malaysian immigration officers could be given access to peoples’ online financial credibility scores. Ma also spoke about his company’s rapid advances in blockchain-based financial technology – but told the Malaysian leader he did not back the controversial cryptocurrency bitcoin. 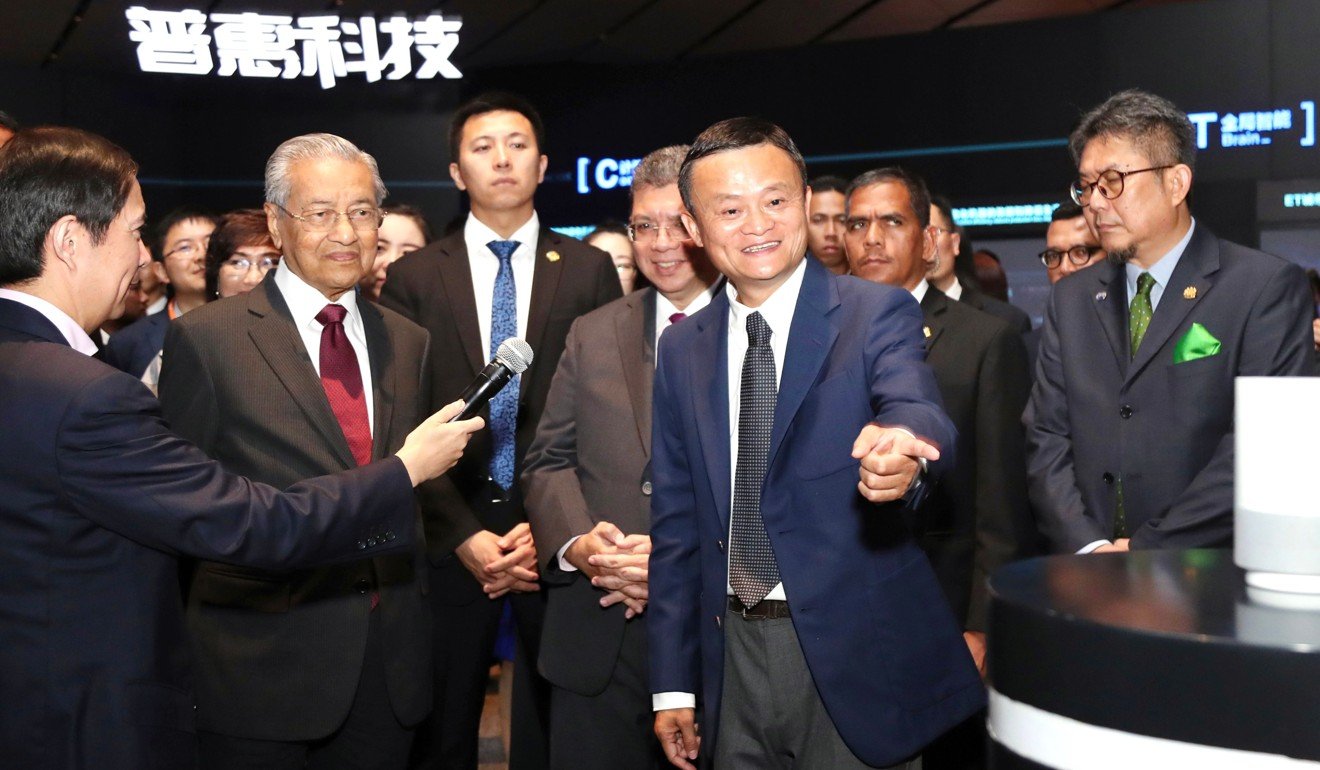 Visiting the Geely headquarters in the afternoon, Mahathir witnessed the signing of a deal between the Hangzhou-based company and Malaysian carmaker Proton that will allow Proton to tap on the Chinese firm’s prowess in making green cars.

“When Proton was first produced, Geely was nowhere around. We sent six Proton cars here [to China], and we were very proud of our achievement,” Mahathir said after the inking of the deal. “But as you know, Geely has outstripped us in terms of quality and productivity of your industry. And I think Proton can benefit from working together with Geely.”

Observers say fruitful discussions will smoothen bilateral ties that were thrust onto an uncertain path when Mahathir suspended more than US$20 billion worth of Beijing-backed infrastructure projects after his surprise election in May.

Mahathir will meet China-based Malaysian businessmen and the wider Malaysian diaspora tomorrow in Beijing, before the meetings with Premier Li Keqiang and President Xi Jinping on Monday.

The premier believes his scandal-tainted predecessor Najib Razak endorsed the deals despite having terms that were skewed against Malaysia and is trying to open renegotiations during this trip.