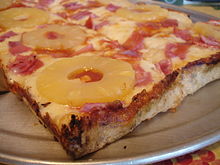 Hawaiian pizza is a pizza topped with tomato sauce, cheese, pineapple, and back bacon or ham. Some versions may include peppers, mushrooms, bacon or pepperoni.[citation needed]

Pineapple as a pizza topping divides public opinion: Hawaiian was the most popular pizza in Australia in 1999, accounting for 15% of pizza sales,[1] and a 2015 review of independent UK takeaways operating through Just Eat found the Hawaiian pizza to be the most commonly available.[2] However, a 2016 survey of US adults had pineapple in the top three least favourite pizza toppings, ahead of anchovies and mushrooms.[3]

Greek-Canadian Sam Panopoulos claimed that he created the first Hawaiian pizza at the Satellite Restaurant in Chatham, Ontario, Canada in 1962. Inspired in part by his experience preparing Chinese dishes which commonly mix sweet and savoury flavours, Panopoulos experimented with adding pineapple, ham, bacon and other toppings which were not initially very popular.[4][5][6][7][8] The addition of pineapple to the traditional mix of tomato sauce and cheese, sometimes with ham or sometimes with bacon, soon became popular locally and eventually became a staple offering of pizzerias around the world.[9]

In Germany, Hawaiian pizza is thought to be a variation of the ham, pineapple and cheese topped Toast Hawaii, originally introduced by Germany's first TV cook Clemens Wilmenrod in 1955.[10][11][12]

In February 2017, the president of Iceland, Guðni Th. Jóhannesson, reportedly told a group of high school students during a Q&A that he was fundamentally opposed to pineapple on pizza. He added that he would ban pineapple as a pizza topping if he could. His off-the-cuff remark generated a flurry of media coverage and inspired lovers and haters of Hawaiian pizza to express their opinions on social media. Various celebrities shared their preferences on the matter,[13][14][15][16] including Canada's Prime Minister, Justin Trudeau.[17][18] Panopoulos, at that point retired from the restaurant business, was called upon by some media outlets to defend his creation.[7][19] Guðni later clarified in a Facebook post that he did not have the power to ban particular toppings on pizza and would not like to live in a country where the leader could ban anything he or she did not like.[20]