By Wikipedia Contributors
10 - 13 minutes
For uses and theory of fluorescence, see Fluorescence in the life sciences. 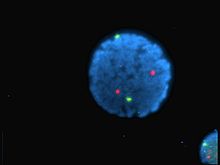 A fluorophore (or fluorochrome, similarly to a chromophore) is a fluorescent chemical compound that can re-emit light upon light excitation. Fluorophores typically contain several combined aromatic groups, or planar or cyclic molecules with several π bonds.[1]

Fluorophores are sometimes used alone, as a tracer in fluids, as a dye for staining of certain structures, as a substrate of enzymes, or as a probe or indicator (when its fluorescence is affected by environmental aspects such as polarity or ions). More generally they are covalently bonded to a macromolecule, serving as a marker (or dye, or tag, or reporter) for affine or bioactive reagents (antibodies, peptides, nucleic acids). Fluorophores are notably used to stain tissues, cells, or materials in a variety of analytical methods, i.e., fluorescent imaging and spectroscopy.

Fluorescein, by its amine reactive isothiocyanate derivative FITC, has been one of the most popular fluorophores. From antibody labeling, the applications have spread to nucleic acids thanks to (FAM (Carboxyfluorescein), TET,...). Other historically common fluorophores are derivatives of rhodamine (TRITC), coumarin, and cyanine.[2] Newer generations of fluorophores, many of which are proprietary, often perform better, being more photostable, brighter, and/or less pH-sensitive than traditional dyes with comparable excitation and emission.[3][4]

The fluorophore absorbs light energy of a specific wavelength and re-emits light at a longer wavelength. The absorbed wavelengths, energy transfer efficiency, and time before emission depend on both the fluorophore structure and its chemical environment, as the molecule in its excited state interacts with surrounding molecules. Wavelengths of maximum absorption (≈ excitation) and emission (for example, Absorption/Emission = 485 nm/517 nm) are the typical terms used to refer to a given fluorophore, but the whole spectrum may be important to consider. The excitation wavelength spectrum may be a very narrow or broader band, or it may be all beyond a cutoff level. The emission spectrum is usually sharper than the excitation spectrum, and it is of a longer wavelength and correspondingly lower energy. Excitation energies range from ultraviolet through the visible spectrum, and emission energies may continue from visible light into the near infrared region.

Main characteristics of fluorophores are :

These characteristics drive other properties, including the photobleaching or photoresistance (loss of fluorescence upon continuous light excitation). Other parameters should be considered, as the polarity of the fluorophore molecule, the fluorophore size and shape (i.e. for polarization fluorescence pattern), and other factors can change the behavior of fluorophores.

Most fluorophores are organic small molecules of 20 - 100 atoms (200 - 1000 Dalton - the molecular weight may be higher depending on grafted modifications, and conjugated molecules), but there are also much larger natural fluorophores that are proteins: Green fluorescent protein (GFP) is 27 kDa and several phycobiliproteins (PE, APC...) are ≈240kDa.

The size of the fluorophore might sterically hinder the tagged molecule, and affect the fluorescence polarity. 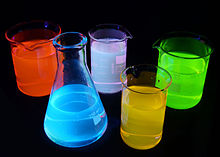 Fluorescence of different substances under UV light. Green is a fluorescein, red is Rhodamine B, yellow is Rhodamine 6G, blue is quinine, purple is a mixture of quinine and rhodamine 6g. Solutions are about 0.001% concentration in water.

Fluorophore molecules could be either utilized alone, or serve as a fluorescent motif of a functional system. Based on molecular complexity and synthetic methods, fluorophore molecules could be generally classified into four categories: proteins and peptides, small organic compounds, synthetic oligomers and polymers, and multi-component systems. [5][6]

Fluorescent proteins GFP (green), YFP (yellow) and RFP (red) can be attached to other specific proteins to form a fusion protein, synthesized in cells after transfection of a suitable plasmid carrier.

These fluorophores fluoresce thanks to delocalized electrons which can jump a band and stabilize the energy absorbed. Benzene, one of the simplest aromatic hydrocarbons, for example, is excited at 254 nm and emits at 300 nm.[7] This discriminates fluorophores from quantum dots, which are fluorescent semiconductor nanoparticles.

Additionally, various functional groups can be present to alter its properties, such as solubility, or confer special properties, such as boronic acid which binds to sugars or multiple carboxyl groups to bind to certain cations. When the dye contains an electron-donating and an electron-accepting group at opposite ends of the aromatic system, this dye will probably be sensitive to the environment's polarity (solvatochromic), hence called environment-sensitive. Often dyes are used inside cells, which are impermeable to charged molecules, as a result of this the carboxyl groups are converted into an ester, which is removed by esterases inside the cells, e.g., fura-2AM and fluorescein-diacetate.

The following dye families are trademark groups, and do not necessarily share structural similarities. 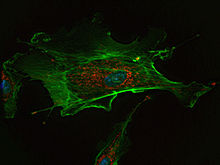 Fluorophores have particular importance in the field of biochemistry and protein studies, e.g., in immunofluorescence but also in cell analysis, e.g. immunohistochemistry[3] [9] and small molecule sensors.

Uses outside the life sciences

Additionally fluorescent dyes find a wide use in industry, going under the name of "neon colours", such as