The SF Bay Area, where the streets are paved with single young men

Remember that time I was blasting a startup for shipping single women from NYC to San Francisco? And about how I had all of this cool data that showed that there were actually more single men in New York, and they were probably just hiding indoors playing video games?

And that other time I showed how I was completely kind of horribly somewhat wrong, and that Manhattan is nothing but an island-nation of nothing but women? Now it’s time to take a look at the other half of the puzzle: the ratio of single men to single women in the San Francisco Bay Area.

Note: This is all fiercely heteronormative, and I’m sorry about that, but such is the data bestowed by the US Census Bureau. If you’d like to see a hilarious side effect of this, scroll down to the last image. Additionally, “single” according to the Census means anyone who isn’t married, so even long-term relationships don’t come into the picture at all.

Please, have at this map. It’s singles by age and zip code in the SF Bay Area. Use the age range sliders to get it to an area that’s meaningful to you, I’ve started it off at 20-34.

Singles ratios for ages 20-34: The streets of San Francisco are paved with men

Ooookay, that’s a lot of single men. Very much the opposite of what we found about New York, where the core of Manhattan was primarily single women. And yes, this map doesn’t account for sexuality at all, so there are plenty of men in those blue zones with zero interest in women.

The only outpost with an excess of single women in San Francisco is Pacific Heights, although if you believed Wikipedia’s list of Notable Residents it’d be 80% male (cough). SF’s Chinatown, which the racial dot map and Wikipedia point to as to the upper right of the word “San Francisco,” is actually far more gender-neutral than similar immigrant communities we found in NYC.

If we zoom out, things even out a bit.

Right over the bay, Oakland mixes it up a bit while Berkeley is a nice little gender melting pot. Again, race might play an issue here – last time we found that African-American communities seemed to have a higher percentage of single women, and the splits might be helped along by racial divides (Oakland [female] is more black, while Alameda [male] is more white/Asian). It doesn’t line up as much on the east side, though, so take that with a grain of salt.

Also! Every time I talk about race, just refer to this incredible map that I didn’t make.

We can zoom out a bit further to include the Bay in its complete glory: 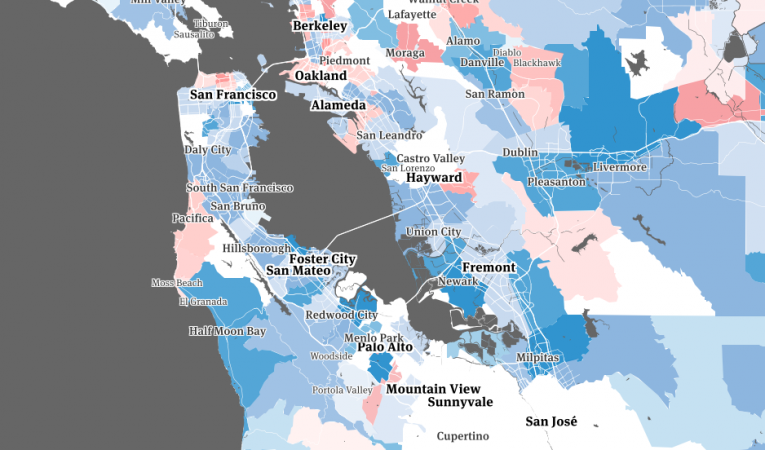 I don’t know what to say except the Bay Area is full of single men. What can we do about it? Just move Manhattan into the middle of the Bay? I, sadly, don’t have answers for you.

Sunnyvale, San Jose and Mountain View come up about even between single men and single women, while San Mateo is piles upon piles of single men and Fremont looks as blue as a perfect day at the seashore.

I know absolutely nothing about the West Coast, so I’m going to need your help with my analysis. Comment below, email or tweet at me to let me know your incredibly astute (I’m certain of it!) observations.

What I lack in modern-day knowledge, though, I made up for in old maps. Here’s a gender-balance map from a 1890 Census Atlas:

Gender ratio across the USA, 1890. Buy it at Vintage Visualizations!

Pink is women in excess, the ruddy, brutish reddish-brown is extra men. Like I said with the NYC map, Kipling nailed it: East is East, and West is West, and never the twain shall meet.

If you’re straight, single, and looking for love, my best advice might just be to go buy a plane ticket.

Or, wait it out! If you read up on the age issues on my original singles map, you’d find that once all the men get old and die off, it’s nothing but single women all across America. 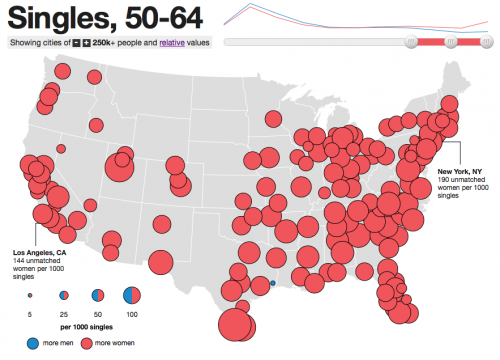 A screenshot from my original singles map, singles aged 50-64

This was the issue that caused the original trouble, though: when you organize things at the level of an entire city (and its surrounding suburbs), you miss out on the nuance that breaks the heart of every single woman in New York City.

Playing around with the age ranges for the Bay Area, I set it to 50-64 and found a map that just plain made me giggle.

While the rest of the world has decayed into a land of unmarried, widowed women, San Francisco stays forever true. This is one instance where you can probably see the Castro from space.

Tomorrow’s treat: a nationwide singles map, hop on our newsletter to be sure you don’t miss it!