​​@RexValachorum created an excellent Twitter thread lampooning the socialist life. He described in vivid detail the harsh reality of surviving in socialist Romania.  Unfortunately—for the reason I don’t really know—the account was suspended (and all the tweets were lost).

​​I have stitched back this thread from a Scribd doc and Wayback machine archives. I have tried to keep the text as it was tweeted. Unfortunately, I couldn’t restore all the images. Nevertheless, the thread does its job of showing the day-to-day life of a person in a socialist world.

​​Update: @RexValllachorum has started retweeting the threads. I’ll update this document as I gather more information.

​​Part I: Socialism vs Communism

​​“Thread dedicated to all leftists who believe the grass is greener and cows are fatter inside the collectivist pastures.”

​​“First, let's make something clear, since I can already hear you whining "But...but...you are talking about life in a communist country, we don't want communism, socialism is different!" Yes it is, you little snowflakes. Communism is the final goal in the Marxist philosophy.”

​​“In communism, all people are equal, one works to the best of his ability and it is provided with subsistence goods in accordance to what the State says the person needs. There is no need for money, no salaries, no banks, no financial system. That is communism.”

​​“No socialist country in the world has ever achieved the predicted final stage, that of communism. Not USSR, not Cuba, not Romania, Poland, Bulgaria, China or North Korea. All these countries were (and some still are) SOCIALIST. They still use money, people get salaries, private…”

​​“…property still exists to an extent or another (for example in Socialist Romania you could buy your own home or a small parcel of land, grow food and take it to the farmers market although the price you could sell it for was regulated, thus discouraging private producers).”

​​“IN CONCLUSION: there were never real communist countries anywhere in the world. They were all socialist. They all had socialist economies and they were ruled by communist Parties. Communism was the goal, this is why the ruling political class and their Party were called communist.”

​​“About the other claim, that socialism isn't the same with democratic socialism, the kind of kinder, gentler strain of Bernie socialism the millennials are so enamored of. The only difference between the two is how much political power each has at a given moment.”

​​“…press and protect private property, just like our friend Bernie promises. Everything was tolerable for a couple of years. Then little by little Chavez started nationalizing industry after industry, started persecutions against free speech, shut down opposition TV and newspapers rigged…”

​​“…elections, used military and police force against the opposition, declared himself President for life and generally speaking ruined one of the most prosperous Latin American countries transforming it in a shithole under the thunderous applause of brain dead American liberals…”

​​“…like Sean Penn, Danny Glover as well as other imbeciles enrolled in public colleges across the US. Maduro, the present socialist dictator of Venezuela is just continuing the destruction and he'll probably pay for it with his life, like Ceausescu did in 1989.”

​​“In conclusion: socialist-democrats are just ordinary socialists who didn't confiscated all guns (so they are still afraid of us free citizens) and didn't managed to grab all the political power. Yet. Now that all of this is cleared, let's see how beautiful life is in socialism.” ​​“One had to wait in line hours, sometime even days, and quite often without even knowing for what. People were just lining up, hoping for any kind of food or other necessities delivery the store. You could hire a person to stand for you.” 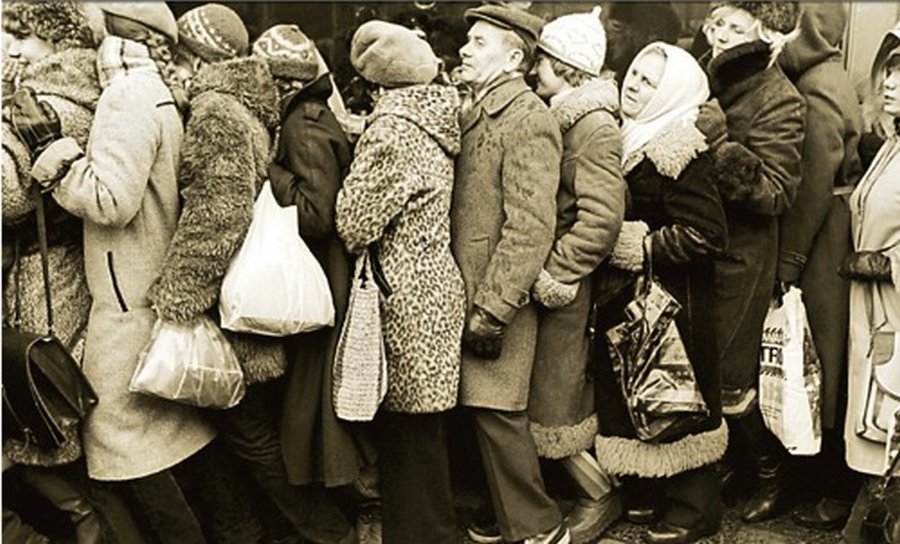 ​​“Usually working age people who couldn't skip work sent their elderly retired parents to stay in line. If parents were in another city or they were dead or incapacitated, you could pay a neighbor who was a pensioner to stay in line for you.”

​​“What were people waiting in line for? Practically anything. Bread; chicken feet (AKA Adidas); pig heads (AKA computers); rarely whole chicken with a questionable smell and color and was available (AKA roadkill), potatoes, onion and any other kind of vegetables you may think of…”

​​“…sugar, cooking oil, milk, butter, eggs, flour, rice...you name it. And don't imagine people were staying in line for hours to buy all of the above in one single swoop. No, the stores were completely EMPTY, today the delivery truck was bringing chicken feet, you were waiting in…”