Martian atmosphere behaves as one 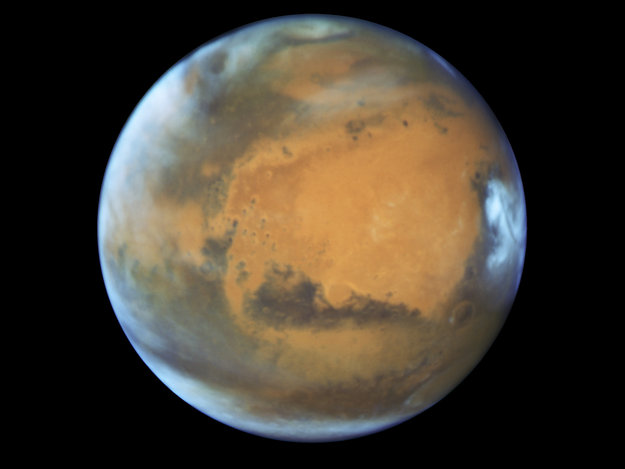 New research using a decade of data from ESA’s Mars Express has found clear signs of the complex martian atmosphere acting as a single, interconnected system, with processes occurring at low and mid levels significantly affecting those seen higher up.

Understanding the martian atmosphere is a key topic in planetary science, from its current status to its past history. Mars’ atmosphere continuously leaks out to space, and is a crucial factor in the planet’s past, present, and future habitability – or lack of it. The planet has lost the majority of its once much denser and wetter atmosphere, causing it to evolve into the dry, arid world we see today.

However, the tenuous atmosphere Mars has retained remains complex, and scientists are working to understand if and how the processes within it are connected over space and time.

A new study based on 10 years of data from the radar instrument on Mars Express now offers clear evidence of a sought-after link between the upper and lower atmospheres of the planet. While best known for probing the interior of Mars via radar sounding, the instrument has also gathered observations of the martian ionosphere since it began operating in 2005.

“The lower and middle levels of Mars’ atmosphere appear to be coupled to the upper levels: there’s a clear link between them throughout the martian year,” says lead author Beatriz Sánchez-Cano of the University of Leicester, UK.

“We found this link by tracking the amount of electrons in the upper atmosphere – a property that has been measured by the MARSIS radar for over a decade across different seasons, areas of Mars, times of day, and more – and correlating it with the atmospheric parameters measured by other instruments on Mars Express.” 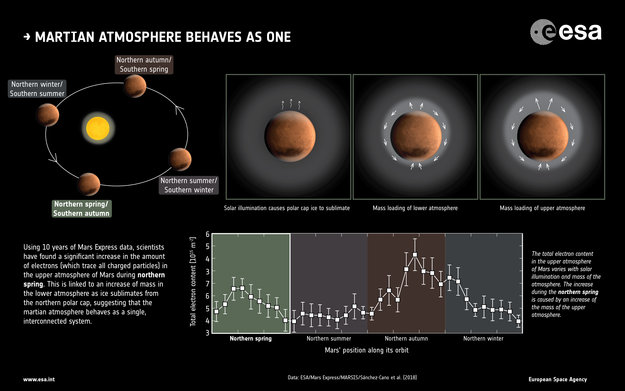 From the polar caps to Mars' upper atmosphere

The amount of charged particles in Mars’ upper atmosphere – at altitudes of between 100 and 200 km – is known to change with season and local time, driven by changes in solar illumination and activity, and, crucially for this study, the varying composition and density of the atmosphere itself. But the scientists found more changes than they were expecting.

“We discovered a surprising and significant increase in the amount of charged particles in the upper atmosphere during springtime in the Northern hemisphere, which is when the mass in the lower atmosphere is growing as ice sublimates from the northern polar cap,” adds Beatriz.

Mars’ polar caps are made up of a mix of water ice and frozen carbon dioxide. Each winter, up to a third of the mass in Mars’ atmosphere condenses to form an icy layer at each of the planet’s poles. Every spring, some of the mass within these caps sublimates to rejoin the atmosphere, and the caps visibly shrink as a result.

“This sublimation process was thought to mostly only affect the lower atmosphere – we didn’t expect to see its effects clearly propagating upwards to higher levels,” says co-author Olivier Witasse of the European Space Agency, and former ESA Project Scientist for Mars Express.

“It’s very interesting to find a connection like this.”

The finding suggests that the atmosphere of Mars behaves as a single system.

This could potentially help scientists to understand how Mars’ atmosphere evolves over time – not only with respect to external disturbances such as space weather and the activity of the Sun, but also with respect to Mars’ own strong internal variability and surface processes. 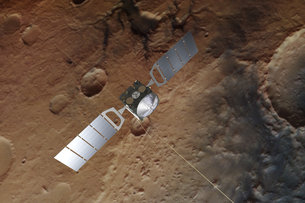 Understanding the complex atmosphere of Mars is one of the key objectives of ESA’s Mars Express mission, which has been operating in orbit around the Red Planet since 2003.

“Mars Express is still going strong, with one of its current key objectives being to explore exactly how the martian atmosphere behaves, and how different layers of it are connected to one another,” says ESA Mars Express Project Scientist Dmitri Titov.

“Having a long baseline of data is fundamental to our study of Mars – there’s now over a decade of observations to work with. These data don’t just cover a long time period, but also the entirety of Mars and its atmosphere.

“This wealth of comprehensive and complementary observations by different instruments on Mars Express makes studies like this one possible and, together with ESA’s Trace Gas Orbiter and NASA’s MAVEN mission, is helping us to unravel the secrets of the martian atmosphere.”

“Spatial, seasonal and solar cycle variations of the Martian total electron content (TEC): Is the TEC a good tracer for atmospheric cycles?” by Sánchez-Cano et al. is published in the Journal of Geophysical Research, doi: 10.1029/2018JE005626.

The study is based on data collected by the Mars Express MARSIS instrument, the Mars Advanced Radar for Subsurface and Ionosphere Sounding.

Mars Express was launched on 2 June 2003 and reaches 15 years in space this year.