The many faces of consistency

By Murat
14 - 18 minutes
This is a lovely paper (2016) from Marcos Aguilera and Doug Terry. It is an easy read. It manages to be technical and enlightening without involving analysis, derivation, or formulas.

The paper talks about consistency. In distributed/networked systems (which includes pretty much any practical computer system today), data sharing and replication brings up a fundamental question: What should happen if a client modifies some data items and simultaneously, or within a short time, another client reads or modifies the same items, possibly at a different replica?

The answer depends on the context/application. Sometimes eventual consistency is what is desired (e.g., DNS), and sometimes you need strong consistency (e.g., reservations, accounting).

The paper points out two different types of consistency, state consistency and operation consistency, and focuses mainly on comparing/contrasting these two approaches.

When I see the terms state versus operation consistency, without reading the rest of the paper, my gut reaction is to conclude that this is a matter of abstraction. If you are implementing the system, you work at the state consistency level. If you are exposing this to the clients, since they do not need to know the internals of the system and would only care about the operations they invoke, then you work at the operational consistency level. The state consistency can help support and provide operational consistency to the clients. My gut reaction turns out to be pretty accurate, yet the paper goes into more details and elaborates on some subtleties. I am glad to read about the two approaches in more detail. I think, going forward, it would be important to relate/bridge/reconcile these two approaches. State consistency pertains to the state of the system (which comprises of the current values of the data items). These are properties that the system should satisfy despite concurrent access and the existence of multiple replicas.

A major subcategory of state consistency is one defined by an invariant ---a predicate on the state that must evaluate to true. For example, in a concurrent program, a singly linked list must not contain cycles. As another example, in a primary-backup system mutual consistency invariant requires that replicas have the same state when there are no outstanding updates.

It is possible to weaken/loosen invariants to include error bounds, probabilistic guarantees, and eventual satisfaction. State consistency is limited to the properties on state, but in many cases clients care little about the system state and more about the results that they obtain from the system. This calls for a different form of consistency, operation consistency, which pertains to the behavior that clients observe from interacting with the system. Operation consistency has subcategories based on the different ways to define the consistency property. This subcategory defines the permitted operation results of a concurrent execution in terms of the permitted operation results in a sequential execution. Some examples are as follows.

Linearizability is a strong form of consistency. Each operation must appear to occur at an instantaneous point between its start time (when the client submits it) and finish time (when the client receives the response), and execution at these instantaneous points form a valid sequential execution. More precisely, there must exist a legal total order T of all operations with their results, such that (1) T is consistent with the partial order <, meaning that if op1 finishes before op2 starts then op1 appears before op2 in T, and (2) T defines a correct sequential execution.

Sequential consistency is weaker than linearizability. It requires that operations execute as if they were totally ordered in a way that respects the order in which *each client* issues operations. More precisely, the partial order < is this time defined as: op1 < op2 iff both operations are executed by *the same client* and op1 finishes before op2 starts. In other terms, while linearizability imposes across-clients system-level ordering, sequential consistency is content with imposing a client-centric ordering.

Reference equivalence is a generalization of sequential equivalence. Examples of this occur often in database systems.

The read-write centric subcategory applies to systems with two very specific operations: read and write. Consistency is defined with respect to the set of writes that could have potentially affected the read.

Read-my-writes requires that a read by a client sees at least all writes previously executed by the same client, in the order in which they were executed. This is relevant when clients expect to observe their own writes, but can tolerate delays before observing the writes of others.

However, the truth is multidimensional. While unsuitable for reasoning/verification, operational consistency has its advantages.

On which type of consistency to use, the paper suggests the following:


"An interesting example is a storage system with three servers replicated using majority quorums, where (1) to write data, the system attaches a monotonic timestamp and stores the data at two (a majority of) servers, and (2) to read, the system fetches the data from two servers; if the servers return the same data, the system returns the data to the client; otherwise, the system picks the data with the highest timestamp, stores that data and its timestamp in another server (to ensure that two servers have the data), and returns the data to the client. This system violates mutual consistency, because when there are no outstanding operations, one of the servers deviates from the other two. However, this inconsistency is not observable in the results returned by reads, since a read filters out the inconsistent server by querying a majority. In fact, this storage system satisfies linearizability, one of the strongest forms of operation consistency."

The "TAPIR: Building Consistent Transactions with Inconsistent Replication (SOSP'15)" paper also builds on this premise. Irene puts it this way:

"Today, systems that want to provide strong guarantees use Paxos (or, if you are hipper than me, RAFT), and everyone else uses something cheaper. Paxos enforces a strict serial ordering of operations across replicas, which is useful, but requires coordination across replicas on every operation, which is expensive.

What we found in the TAPIR project is that Paxos is too strong for some strong system guarantees and, as a result, is wasting work and performance for those systems. For example, a lock server wants mutual exclusion, but Paxos provides a strict serial ordering of lock operations. This means that a lock server built using Paxos for replication is coordinating across replicas even when it is not necessary to ensure mutual exclusion.


Cosmos DB provides 5 well defined operation consistency properties to the clients: strong, bounded, session, consistent prefix, and eventual consistency. These consistency models were chosen because they are practical and useful as signaled by their actual usage by the customers for their production workloads. And, of course, in order not to leave performance on the table, instead of imposing strong state-based consistency, Cosmos DB global distribution protocols employ several optimizations behind the curtain while still managing to provide the requested operation consistency levels to the clients.

As I mentioned in my previous post, I will post about TLA+/PlusCal translation of consistency levels provided by Cosmos DB here. I also hope to talk about some of the state-consistency invariants and efficiency techniques employed when I start describing the global distribution at the Cosmos DB core layer in my upcoming blog posts.

1. Is it possible to bridge the two approaches? These two approaches can be complementary like two sides of the same coin. I think it is easier to go from state-consistency of the system to inferring and designing operation consistency properties.

How about the other way? While checking operation consistency requires analyzing an execution log, by restricting the domain to specific operations (such as read and write), it is possible to achieve application independence and treat the system as a blackbox. The Jepsen library achieves that for distributed systems testing. If the system is a blackbox, or was developed without invariant/state consistency, this operation consistency based testing approach can help in identifying problems. But it is still unclear, how to infer/design state consistency properties/invariants that can help in fixing the problem.

The development of better tools for observability/auditability approaches (such as Retroscope) can help in bridging this gap.

Another effort to help bridge the gap could be to identify/name and create an ontology of invariants used in state consistency approaches. I don't know much work in that direction except this one from VLDB15.

2. Do these two approaches converge at the eventual consistency position?

Eventual consistency is likely a natural convergence point for the state and operation consistency. This reminds of the "Conflict-free replicated data types" paper.

3. Are terms/definitions about consistency consistent yet?

Consistency is an important concept so it emerged and developed in different domains (distributed systems, databases, and computer architecture) simultaneously. And of course different domains used different terminology and confusion arose. I am not surprised. Even in the distributed systems community, on the restricted topic of distributed consensus, researchers have been using inconsistent terminology for many decades before consensus (pun intended) arose and the terminology converged and standardized. Consistency definitions can be overwhelming because there are many parameters involved, even without considering transactions. 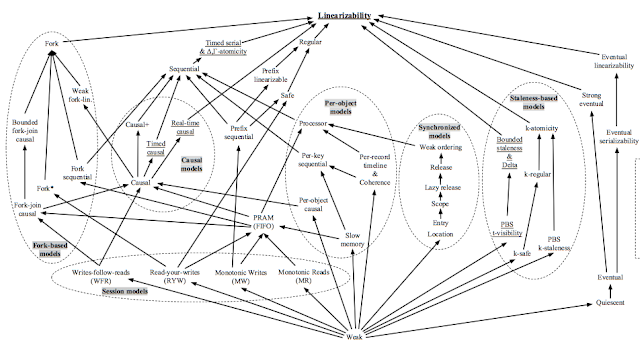 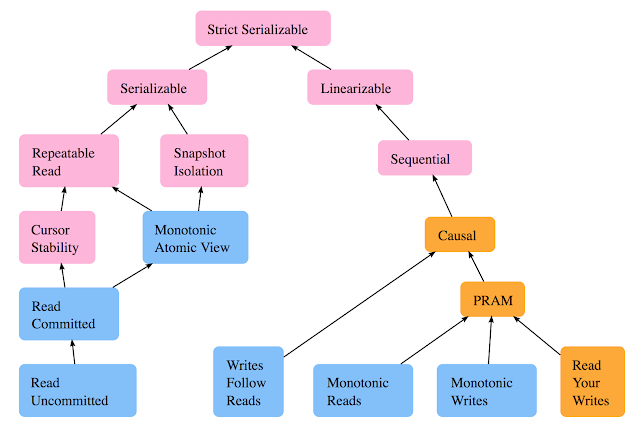