2018 Is Shaping Up to Be the Fourth-Hottest Year. Yet We’re Still Not Prepared for Global Warming.

This summer of fire and swelter looks a lot like the future that scientists have been warning about in the era of climate change, and it’s revealing in real time how unprepared much of the world remains for life on a hotter planet.

The disruptions to everyday life have been far-reaching and devastating. In California, firefighters are racing to control what has become the largest fire in state history. Harvests of staple grains like wheat and corn are expected to dip this year, in some cases sharply, in countries as different as Sweden and El Salvador. In Europe, nuclear power plants have had to shut down because the river water that cools the reactors was too warm. Heat waves on four continents have brought electricity grids crashing.

And dozens of heat-related deaths in Japan this summer offered a foretaste of what researchers warn could be big increases in mortality from extreme heat. A study last month in the journal PLOS Medicine projected a fivefold rise for the United States by 2080. The outlook for less wealthy countries is worse; for the Philippines, researchers forecast 12 times more deaths.

Globally, this is shaping up to be the fourth-hottest year on record. The only years hotter were the three previous ones. That string of records is part of an accelerating climb in temperatures since the start of the industrial age that scientists say is clear evidence of climate change caused by greenhouse gas emissions.

And even if there are variations in weather patterns in the coming years, with some cooler years mixed in, the trend line is clear: 17 of the 18 warmest years since modern record-keeping began have occurred since 2001.

“It’s not a wake-up call anymore,” Cynthia Rosenzweig, who runs the climate impacts group at the NASA Goddard Institute for Space Studies, said of global warming and its human toll. “It’s now absolutely happening to millions of people around the world.”

Be careful before you call it the new normal, though.

Temperatures are still rising, and, so far, efforts to tame the heat have failed. Heat waves are bound to get more intense and more frequent as emissions rise, scientists have concluded. On the horizon is a future of cascading system failures threatening basic necessities like food supply and electricity.

For many scientists, this is the year they started living climate change rather than just studying it.

This week, she is installing sensors to measure sea level rise on the Georgia coast to help government officials manage disaster response.

Katharine Mach, a Stanford University climate scientist, said something had shifted for her, too.

“Decades ago when the science on the climate issue was first accumulating, the impacts could be seen as an issue for others, future generations or perhaps communities already struggling,” she said, adding that science had become increasingly able to link specific weather events to climate change.

“In our increasingly muggy and smoky discomfort, it’s now rote science to pinpoint how heat-trapping gases have cranked up the risks,” she said. “It’s a shift we all are living together.”

Globally, the hottest year on record was 2016. That was not totally unexpected because that year there was an El Niño, the Pacific climate cycle that typically amplifies heat.

More surprising, 2017, which was not an El Niño year, was almost as hot. It was the third-warmest year on record, according to the National Oceanic and Atmospheric Administration, or the second-warmest, according to NASA.

The first half of 2018, also not marked by El Niño, was the fourth-warmest on record, NOAA found.

Have You Been Affected by the Wildfires in California?
Aug. 8, 2018 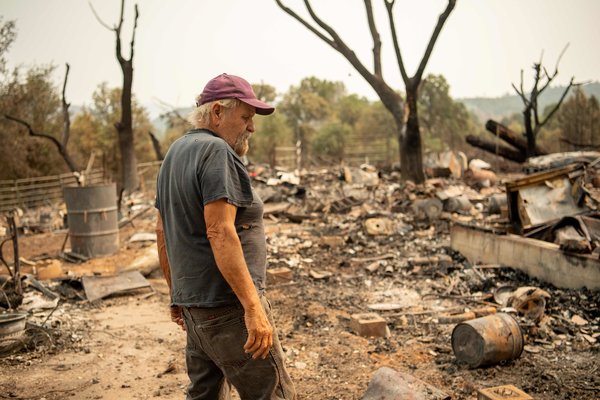 In the lower 48 United States, the period between May and July ranked as the hottest ever, according to NOAA, with an average temperature of 70.9 degrees Fahrenheit (21.6 degrees Celsius) which was 3.4 degrees Fahrenheit (1.9 Celsius) above average in the period since record-keeping began in 1895. Sea levels continued their upward trajectory last year, too, rising about 3 inches, or 7.7 centimeters, higher than levels in 1993.

What does all that add up to?

For Daniel Swain, a climate scientist at the University of California Los Angeles, it vindicates the scientific community’s mathematical models. It doesn’t exactly bring comfort, though.

“We are living in a world that is not just warmer than it used to be. We haven’t reached a new normal,” Dr. Swain cautioned. “This isn’t a plateau.”

Against that background, industrial emissions of carbon dioxide grew to record levels in 2017, after holding steady the previous three years. Carbon in the atmosphere was found to be at the highest levels in 800,000 years.

Despite a global agreement in Paris two years ago to curb greenhouse gas emissions, many of the world’s biggest polluters — including the United States, the only country in the world pulling out of the accord — are not on track to meet the reductions targets they set for themselves. Nor have the world’s rich countries ponied up money, as promised under the Paris accord, to help the poor countries cope with the calamities of climate change.

Still, scientists point out that with significant reductions in greenhouse gas emissions and changes to the way we live — things like reducing food waste, for example — warming can be slowed enough to avoid the worst consequences of climate change.

Some governments, national and local, are taking action. In an effort to avert heat-related deaths, officials are promising to plant more trees in Melbourne, Australia, and covering roofs with reflective white paint in Ahmedabad, India. Agronomists are trying to develop seeds that have a better shot at surviving heat and drought. Switzerland hopes to prevent railway tracks from buckling under extreme heat by painting the rails white.

Climate scientists are also trying to respond faster, better. Dr. Rosenzweig’s team at NASA is trying to predict how long a heat wave might last, not just how likely it is to occur, in order to help city leaders prepare. Similar efforts to forecast the distribution of extreme rainfall are aimed at helping farmers.

Researchers with World Weather Attribution are working to refine their models to make them more accurate. “In Europe the warming is faster than in the models,” said Friederike Otto, an associate professor at Oxford University who is part of the attribution group.

Her group recently concluded that a human-altered climate had more than doubled the likelihood of the record-high temperatures in northern Europe this summer.

The impact of those records is being felt in multiple ways. The continent’s power supply is overstretched as air-conditioners are cranked up.

Then, there’s the impact of heat and drought on farms. In El Salvador, a country reeling from gang violence, farmers in the east of the country stared at a failed corn harvest this summer as temperatures soared to a record 107 degrees Fahrenheit, or about 41 degrees Celsius. The skies were rainless for up to 40 days in some places, according to the government.

Wheat production in many countries of the European Union is set to decline this year. In Britain, wheat yields are projected to hit a five-year low. German farmers say their grain harvests are likely to be lower than normal. And in Sweden, record-high temperatures have left fields parched and farmers scrambling to find fodder for their livestock.

Palle Borgstrom, president of the Federation of Swedish Farmers, said in an interview that his group estimated at least $1 billion in agricultural sector losses.

“We get quite a few phone calls from farmers who are lying awake at night and worrying about the situation,” he said. “This is an extreme situation that we haven’t seen before.”

An earlier version of this article misspelled the given name of a Stanford University climate scientist. She is Katharine Mach, not Katherine.

Somini Sengupta covers international climate issues and is the author of "The End of Karma: Hope and Fury Among India's Young." @SominiSengupta • Facebook

A version of this article appears in print on , on Page A1 of the New York edition with the headline: The Year Global Warming Made Its Menace a Reality. Order Reprints | Today’s Paper | Subscribe