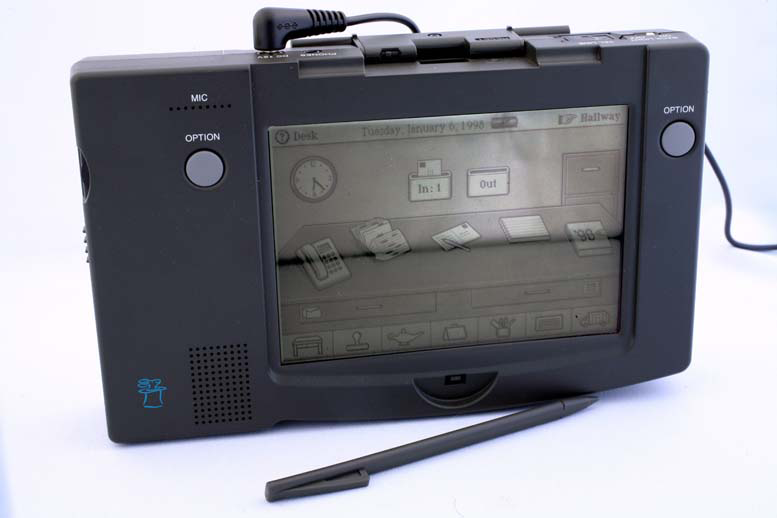 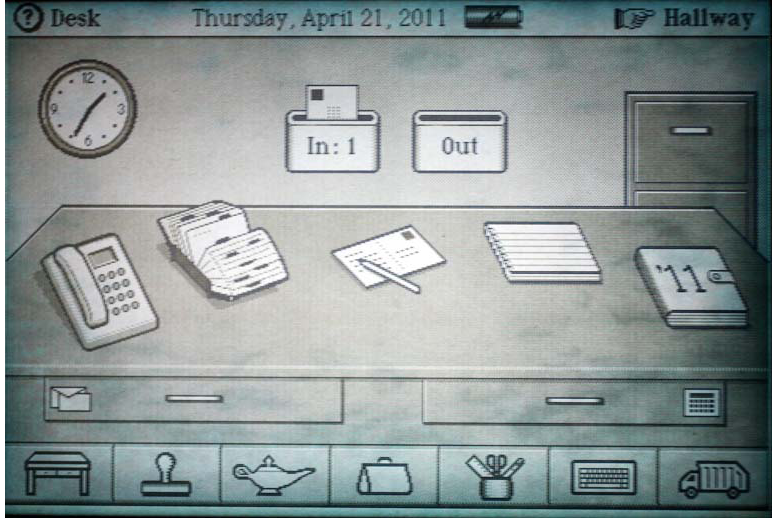 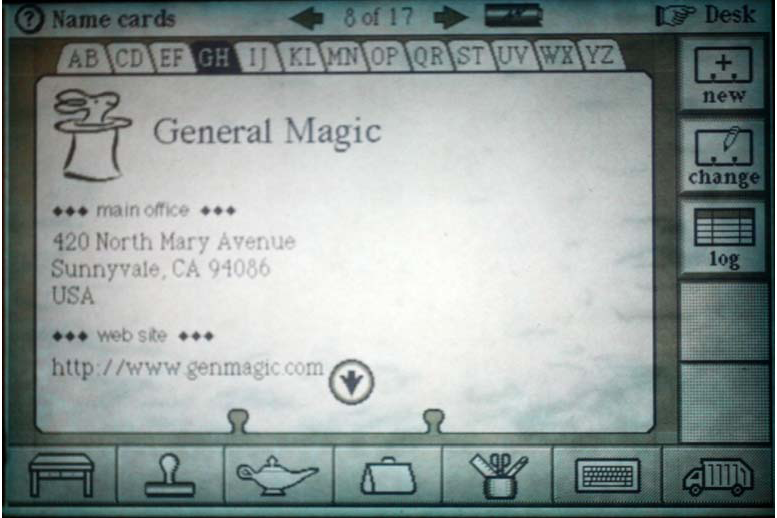 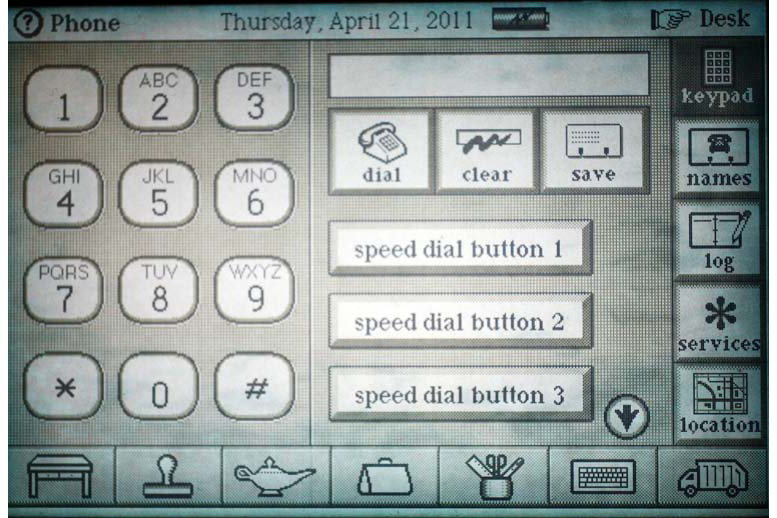 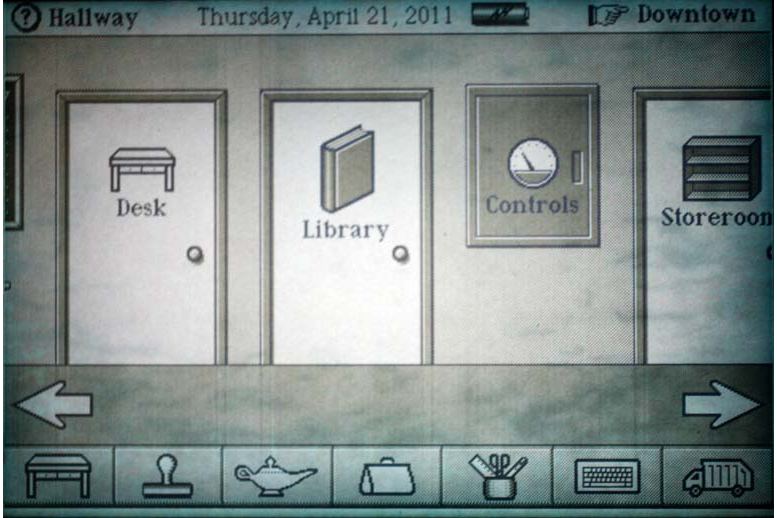 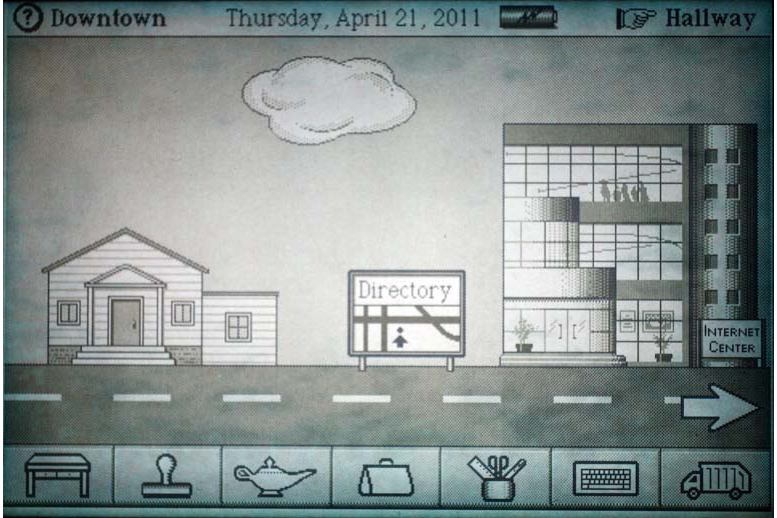 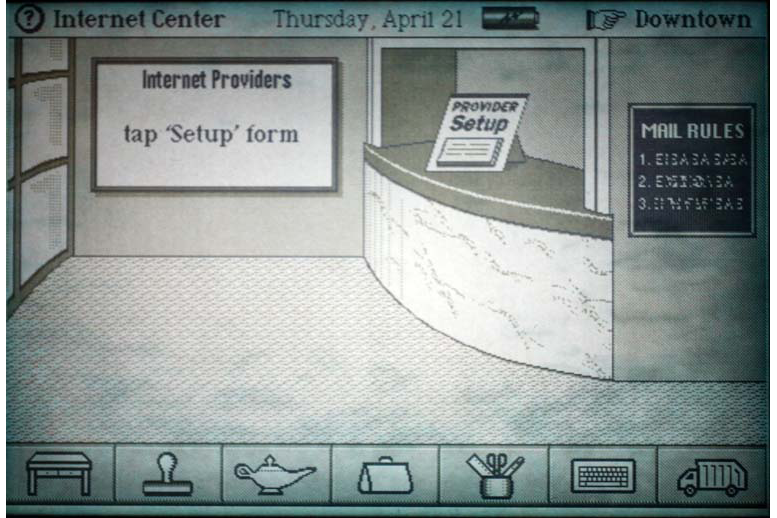 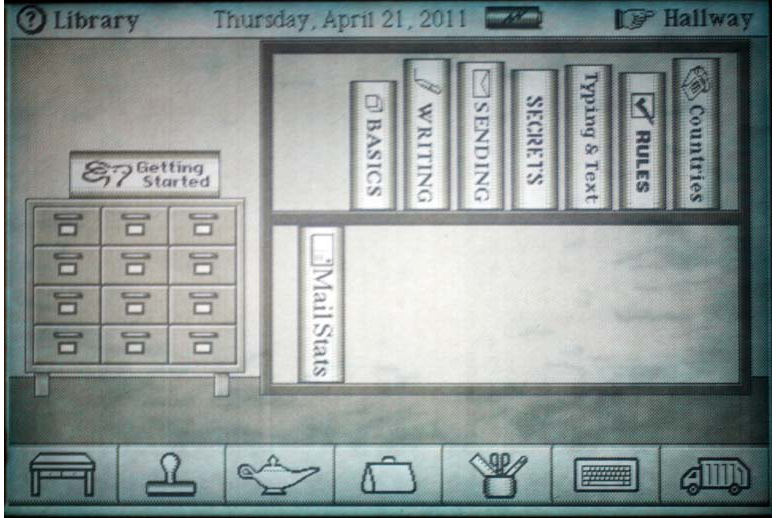 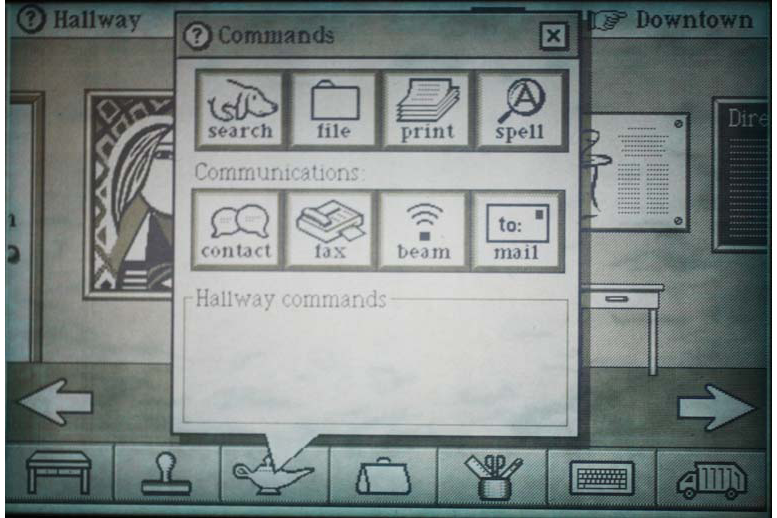 Magic Cap was a pretty interesting operating system that was used on a family of PDA devices, beginning with the Sony Magic Link IC-1000, launched in 1994. It came out of a company called General Magic, started by Bill Atkinson, Andy Herzfeld, and Marc Porat, and spun out of Apple. (Atkinson and Herzfeld had both been key members of the team that developed the software for the original Macintosh.)

The unit that I have, the Data Rover 840, was released in 1988 and ran the 3.0 version of the software, which was much faster and refined than the original. This version had good reviews,1 however this didn't prevent the Magic Cap devices from failing in the market place . That does not make them uninteresting, however.

One interacted with the Magic Cap user interface via a touch screen that was sensitive to either your finger or a stylus. Unlike almost all commercial graphical user interfaces, which use 2D graphics, what one saw on the Magic Cap screen was rendered as 3D line-art, and, the metaphor used was one or rooms, rather than a desktop.

In one of those rooms, your office, you did find your desk. It was drawn in perspective. On it sat a drawing of your address book, Rolodex, phone, drawers, etc. You clicked on each to get the associated capability. Hence, for example, clicking on the Rolodex gave you your address cards, which were – of course – graphically rendered to represent Rolodex cards.

From your office, you could go into the hallway (by clicking on the menu item in the top right corner of the screen), within which you saw the doors to the rooms that were available to enter. These included the Library (where you found reference books, such as dictionaries, etc.), the games room, and a storage room.

The notion of a 3D graphical user interface is one that is proposed to me from time to time. Generally, those who propose it are unaware of Magic Cap, or earlier examples of the rooms metaphor, such as Henderson & Card (1986)3 or the 1984 Learning Company game, Robot Odyssey4.

Apart from it just being a really interesting and important device in the history of PDAs and pen-computing, this is a special device because it is the first gadget that I bought on e-bay. This prompted a great insight: that without writing a line of code, I could "construct" a working interactive prototype of a concept, simply by buying a device from the site (in this case, a brand new vintage Data Rover on e-bay for $27). This is partially why I view e-bay as one of the most important and inexpensive sketching and prototyping technologies available to the designer.

A key lesson is to recognize that we can create renderings of concepts by either synthesis or sampling. Drawing, writing code, or building physical models are examples of synthesis. Finding and collecting existing embodiments of the concept from the physical world is sampling. Creativity and imagination, coupled with a knowledge of history and what to look for, are key tools in effectively applying either approach.

A good collection of documents on Magic Cap can be found at http://joshcarter.com/magic_cap/magic_cap_developer_docs

1http://www.pencomputing.com/magic_cap/data_rover_840.html
2It is not my purpose here to write a history of the company or product. Yet, it is well worth reading about, including as an interesting case study in start-ups, business, and innovation. One good place to start is the following article from Wired: http://www.wired.com/wired/archive/2.04/general.magic_pr.html
3Henderson, D.A. & Card, S. (1986). Rooms: the use of multiple virtual workspaces to reduce space contention in a window-based graphical user interface. ACM Transactions on Graphics (TOG), 5(3), 211-243.
4http://en.wikipedia.org/wiki/Droidquest