Markdown is a great way to document, well anything! If you haven’t had a chance to write it yet a time will probably come sooner than later when you’ll have a case to use it.

You’ll find markdown just about everywhere these days. Places like VSTS, Github repository documentation, comment sections on sites Github or Reddit, and even the engine for this blog uses markdown files for posts! If you aren’t familiar with markdown, you probably have seen it without even realizing yet.

If you read the patch notes (also written in markdown) for PowerShell Core 6.1.0 Preview 4 you’ll find the exciting new news! Under the “General Cmdlet Updates and Fixes” section there is a bullet for “Add Markdown rendering Cmdlets (#6926)”. Let’s take a look!

How to Use It

At the time of writing, you will need to have installed PowerShell Core 6.1.0 Preview 4. If you stumble on this blog in the future and are running a minimum of PowerShell Core 6.1.x this functionality should be available to you though it’s possible the syntax could have changed. 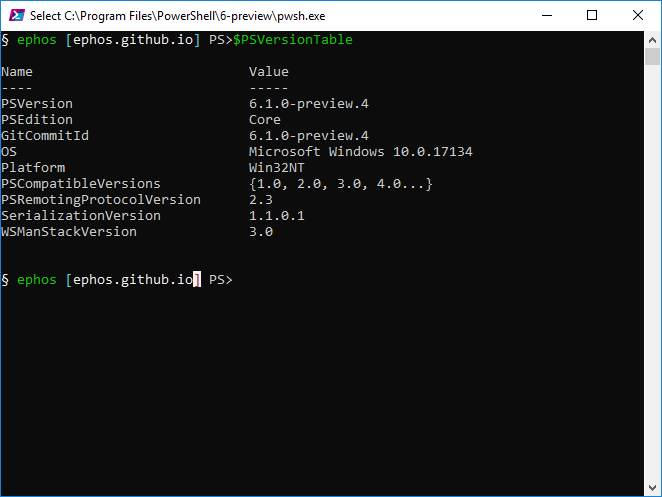 Good ol’ Get-Command should tell you what markdown related commands are available.

You can see we have 4 commands available for some markdown action. 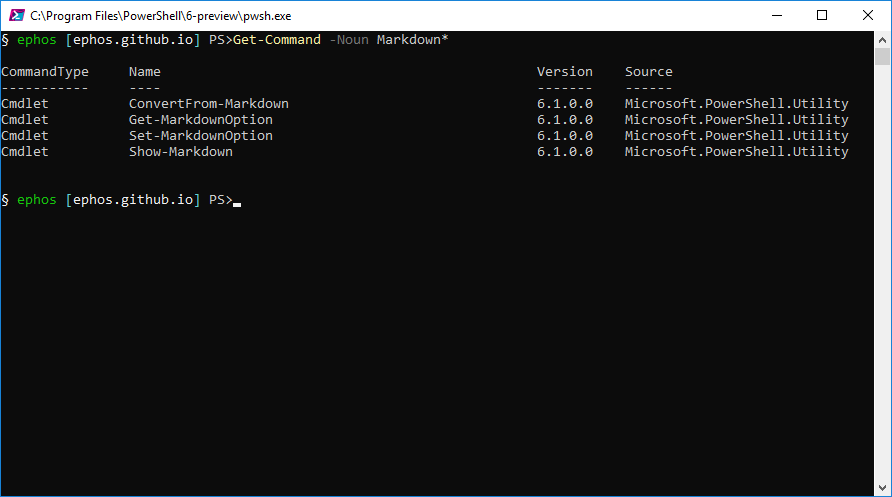 There are two ways you can use this new markdown functionality in PowerShell. Using Show-Markdown you can take markdown and display it as a VT100 encoded string right in the console. Alternatively you can use Show-Markdown to display a markdown file in a web browser.

To parse and view markdown in the comfort of your PowerShell console you can run the following commands, to specify a markdown file, and then display it in the console. Using this blog post as an example your commands would look like the following.

When you run this it will yield results similar to the gif below1.

Pretty cool, you can take raw markdown, and view it in a slightly less jarring way in your PowerShell console. This could be useful when there is a time when you need to work on a system without a Desktop environment, or just for console diehards who want to do as much in a console as possible.

You alternatively can view the parsed markdown in the browser. 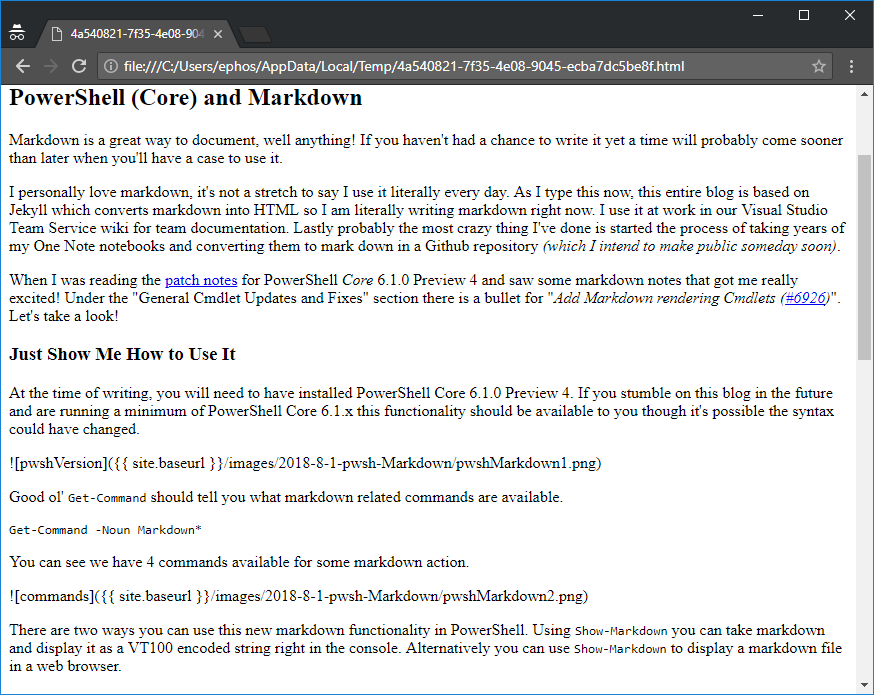 Not the prettiest markdown rendering, but it gets the job done. Note that it will use your systems default browser, in this example Google Chrome.

You may want to change the default colors that are used in the console display.

Back to console land for a minute, what the cuss is VT100? I am admittedly not an expert, like, at all. I do know ANSI/VT100 enabled consoles/terminal emulators are able to display colored text. To see this, go ahead and run Get-MarkdownOption. 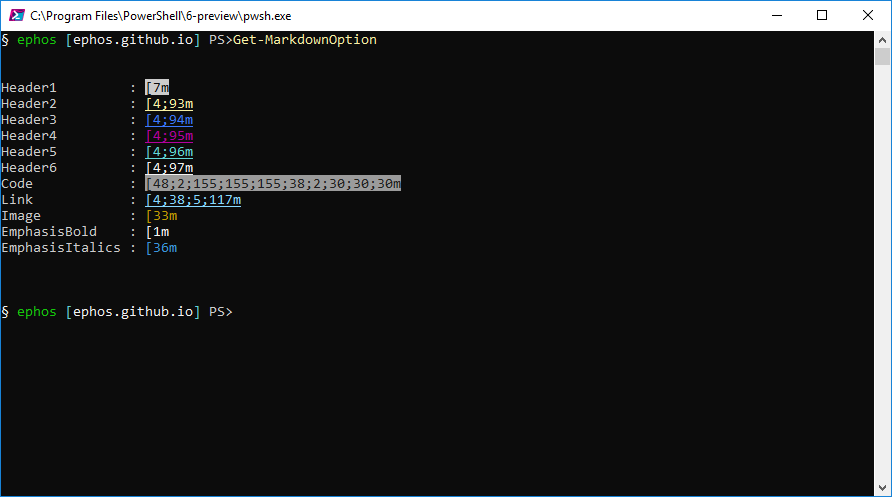 You’ll see that you have different markdown elements like Header1-6, Code, Link, Image, etc. Each has an associated ANSI/VT100 escape code which will determine its color and formatting in the PowerShell console. You can learn more about these escape sequences here if you’re interested.

So, now you know how to see what the console colors will be by default, and have a nice link to a reference sheet of what to change them to if you want.

Let’s say you want to change ‘Header2’ so that it is something other than yellow. You can do that by using Set-MarkdownOption. To make it underlined green you can use [4;32m

You can preview your changes again with Get-MarkdownOption 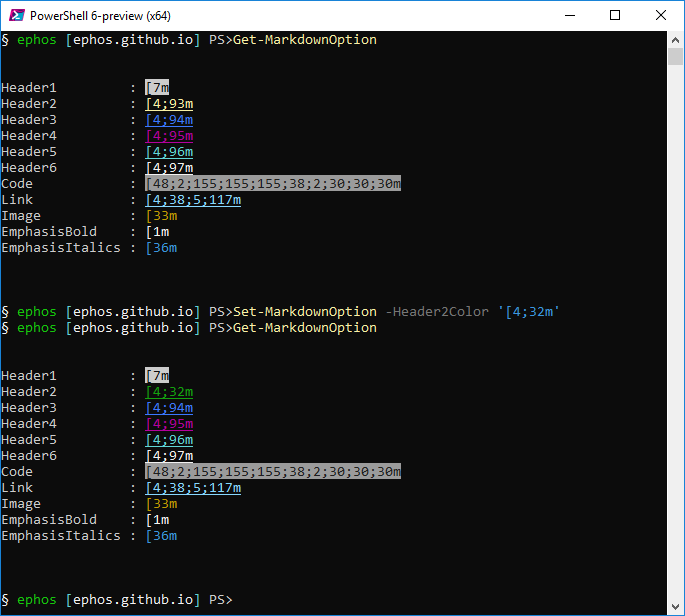 There you have it, next time you display a markdown document in your console, Header2 will be green underlined text rather than the original yellow.

NOTE! This is a preview edition of PowerShell with this functionality. With that said, here are some quirks.

The Set-MarkdownOption changes don’t persist. If you change some colors, close the console and then start it back up the colors reset to the defaults. This can be fixed by possible scripting your preferences to be set on load of your PowerShell profile. Alternatively you can just change them when needed.

I am not sure if this is by design or the developer didn’t want to worry about saving user preferences and where to save them across different operating systems, but either way, just be aware of it.

If you run the ConvertFrom-Markdown without piping into Show-Markdown your console formatting gets weird… You can see below, a lot of my text became Header2-ish, yellow and underlined. 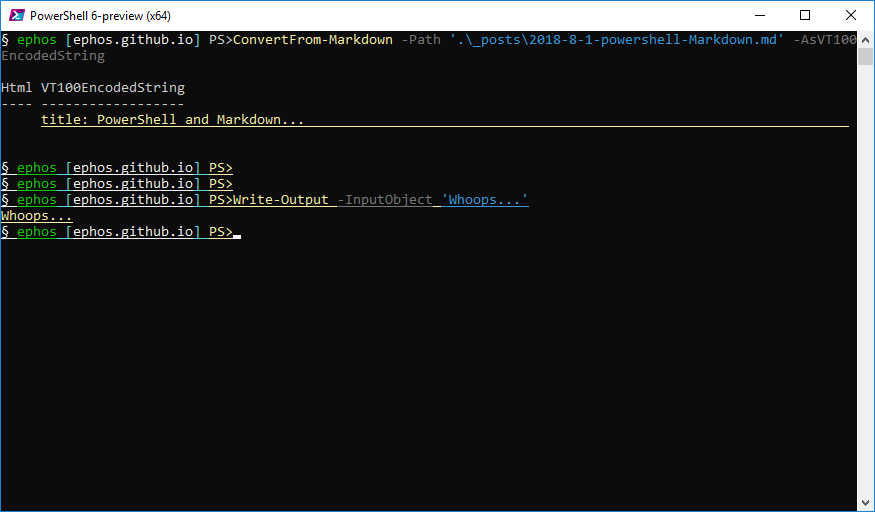 If you hit the footnote in the article you might have already saw that the general usage is kind of confusing and a lot of folks tend to think so as well. You can follow the discussion on Github

Regardless of the quirks, this is really cool new functionality we have in PowerShell! If you are interested in the PowerShell RFC for native markdown rendering you can check it out on Github, or if you want to use your newfound skills to view it the PowerShell way! 2