Wikileaks Refused To Publish Manafort Family Texts, So Someone Else Did

Update: A quick correction/clarification here. The hacked texts in questions were from Manafort's daughter, rather than Manafort himself, but included texts between Manafort and his daughter, as well as other texts about Paul that his daughter sent or received. Wikileaks, for its part, says it didn't publish the texts because they weren't verified. Except that multiple people confirmed the legitimacy of those texts including Paul Manafort himself. The point of the article still stands.

We just wrote about why it would be a dangerous move for press freedom for the DOJ to prosecute Julian Assange for publishing leaked documents. In that post, we noted that even if you think Julian Assange is a horrible human being and proactively trying to undermine US electoral sovereignty, the mere act of publishing leaked documents should not be criminal. But, that doesn't mean that Assange can't be hypocritical and one-sided. Obviously, during the 2016 election, when Wikileaks helped spread both John Podesta's emails and the DNC's emails, some wondered if Assange would have published similar messages from the Trump campaign. While publicly Assange insisted he disliked both campaigns equally, other reports and leaked (of course) chat messages certainly suggested otherwise, as did at least some of his apparent attempts to ingratiate himself with Trump insiders, including asking Don Jr. to leak his father's tax returns to Assange to "dramatically improve the perception of our impartiality."

Of course, when faced with an opportunity to post the equivalent of the Podesta emails on the Trump side, it appears that Assange decided not to do it. Public records-savant Emma Best recently chose to publish the entire collection of leaked Manafort family texts in a searchable database. These texts have long been out there and available if you knew where to look -- and had received widespread reporting in early 2017. However, beyond the excerpts, they were not fully available in a way that was searchable for most users.

Best communicated with Wikileaks, who admitted that it had the entire collection as well, but chose not to publish it -- which certainly can be read as hypocrisy on Assange's part, considering the similarities with the Podesta emails. As Best notes in discussing the decision to publish these in a more accessible format:

This was nearly not the case, however – WikiLeaks had a copy of the database, but ultimately didn’t publish it, despite its newsworthiness and their willingness to publish unredacted information on the Democrats. Their unexplained decision not to put the database into a searchable format and make it public struck me as questionable at the time, but in light of the disclosure of their preference for the GOP it has become not only questionable, but hypocritical. WikiLeaks’ decision can no longer be trusted prima facie or viewed in terms of presumed good faith. 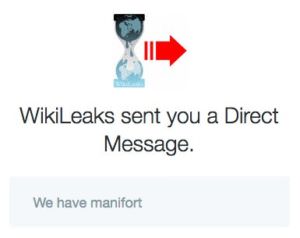 This noteworthy refusal, along with ongoing probes and charges filed against Manafort by the Special Counsel’s office, makes the text messages and their contents undoubtedly newsworthy. Their relevance to the general public may go beyond this, as the personal reality reflected in the messages presents the Manaforts as real people, rather than merely as abstract figures. This same reality is, of course, also relevant to news and current events, and to understanding the character and actions of those involved.

There may be reasons why Wikileaks chose not to publish these texts, but the fact that it eagerly published the Podesta emails, yet held back on publishing these texts should at least raise serious questions. Obviously, every publisher makes different decisions on what to publish and what not to publish. And there's no rule saying that you absolutely must publish every "equivalent" set of data or stories. But given all of the background here, and the high profile nature of this, it is noteworthy to point out the different approaches Wikileaks chose to take with two similar sets of data on different sides of the 2016 election.