Two years ago, Apple launched an aggressive battle against ads that track users across the web. Today executives in the online publishing and advertising industries say that effort has been stunningly effective—posing a problem for advertisers looking to reach affluent consumers.

Since Apple introduced what it calls its Intelligent Tracking Prevention feature in September 2017, and with subsequent updates last year, advertisers have largely lost the ability to target people on Safari based on their browsing habits with cookies, the most commonly used technology for tracking. One result: The cost of reaching Safari users has fallen over 60% in the past two years, according to data from ad tech firm Rubicon Project. Meanwhile ad prices on Google’s Chrome browser have risen slightly.

The Takeaway
Apple’s moves against ad tracking have shaken up the online ad industry, making it harder to target its users and forcing competitors, ad tech firms and publishers to adapt.

That reflects the fact that advertisers pay more money for ads that can be targeted at people with specific demographics and interests. “The allure of a Safari user in an auction has plummeted,” said Rubicon Project CEO Michael Barrett. “There’s no easy ability to ID a user.”

This shift is significant because iPhone owners tend to be more affluent and therefore more attractive to advertisers. Moreover, Safari makes up 53% of the mobile browser market in the U.S., according to web analytics service Statscounter. Only about 9% of Safari users on an iPhone allow outside companies to track where they go on the web, according to Nativo, which sells software for online ad selling. It’s a similar story on desktop, although Safari has only about 13% of the desktop browser market. In comparison, 79% of people who use Google’s Chrome browser allow advertisers to track their browsing habits on mobile devices through cookies. (Nativo doesn’t have historical data so couldn’t say what these percentages were in the past.)

“Apple users are more valuable [to advertisers] based on demographics, being higher income, et cetera,” said Jason Kint, CEO of industry trade group Digital Content Next. He argues that Safari users have been “wrongly devalued” in the short term and says marketers just need to find better ways to reach them online.

As an example, Kint points to ads that relate to the articles someone is reading—contextual advertising—as a format that doesn’t run afoul of privacy issues. He says the format is growing and credits Apple’s clampdown for one reason.

Apple’s targeted ads crackdown reflects CEO Tim Cook’s longstanding public campaign highlighting the importance of user privacy and arguing against data collection as part of the advertising process. Apple has maintained that the company isn’t intending to eliminate advertising as an online business, only to provide privacy protections for it.

Meanwhile, Google, as the world’s largest digital ad company, has remained a staunch defender of ad targeting technology and its importance in delivering relevant ads to users. Google, though, has recently taken steps to provide better privacy and anti-tracking controls to people using Chrome.

While Safari has automatically blocked cookies from outside companies since it was launched in 2003—people have to turn the feature off to allow tracking—ad tech companies quickly figured out workarounds that still allowed them to track people’s browsing habits. But the introduction of ITP and its updates effectively closed those loopholes. 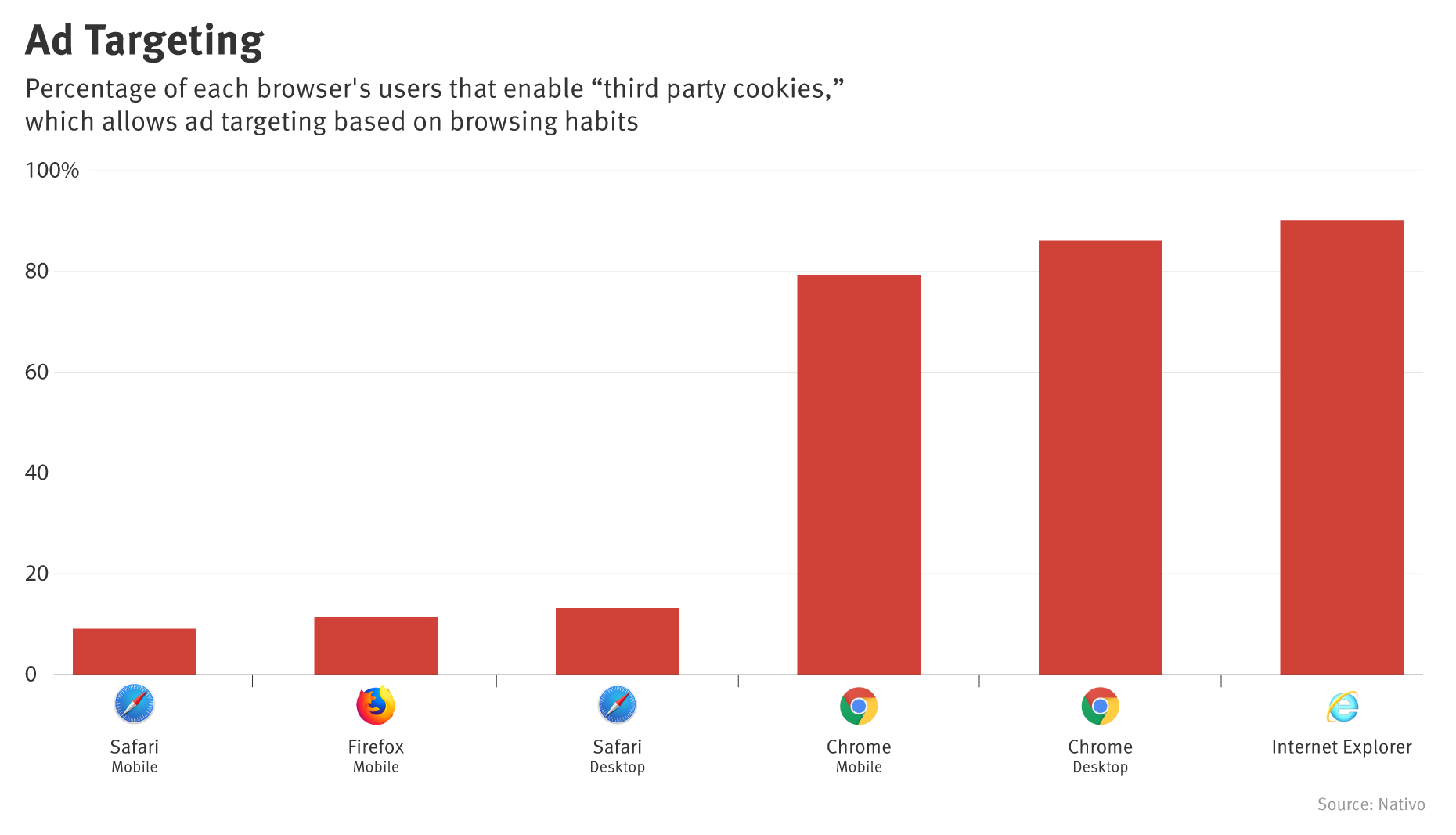 People using Safari can still see digital ads that are not specifically targeted at them based on their browsing history—for instance, a banner ad that appeared to anyone who visited the New York Times’ website. But targeted banner ads are generally much more valuable than broad reach ones because they are designed to reach only the kinds of people who are considered more likely to buy a product. These ads now account for 80% of all spending on online display ads, according to the Interactive Advertising Bureau.

Apple’s policy has influenced other companies to follow suit. Firefox, which has less than 1% of the mobile browser market, but 8% of the desktop market, also locked down on ad targeting in 2017. It now has a similarly low percentage—11%—of users who allow for cookie-based tracking, according to Nativo’s data. Microsoft recently announced it was similarly going to tighten up with its Edge web browser.

On the other hand, ad tech firms that specialize in targeted ad sales, have been affected. Criteo, a publicly traded ad tech company, said Apple’s introduction of ITP cost it $25 million in revenue in the fourth quarter of 2017, or 9% of the total, excluding the cost of acquiring traffic. A Criteo spokeswoman said that by making the ad-blocking feature automatic in Safari, Apple “does not truly promote choice for the users of its browser.”

The spokeswoman said ITP had continued to affect Criteo’s business since 2017, which she said was the case with the rest of the ad industry.

The impact of Apple’s efforts have been mixed for publishers. While publishers can’t sell some ad space targeted at Safari users at the same price as they used to, Kint argues rates will recover if all browsers match each other’s levels of privacy protection. Meanwhile, publishers can find other ways to sell targeted ads to users that don’t involve tracking their habits on other sites.

For instance, a publisher can track what people do on their own site—just not on other sites. So they can sell targeted ads based on the information they have.