What Tracking Down Missing TCP Keepalives Taught Me About Docker, Golang, and GitLab

What began as failure in a GitLab static analysis check led to a dizzying investigation that uncovered a subtle bug in the Docker client library code used by the GitLab Runner. We ultimately worked around the problem by upgrading the Go compiler, but in the process we uncovered an unexpected change in the Go TCP keepalive defaults that fixed an issue with Docker and GitLab CI.

This investigation started on October 23, when backend engineer Luke Duncalfe mentioned, "I'm seeing static-analysis failures with no output. Is there something wrong with this job?" He opened a GitLab issue to discuss.

When Luke ran the static analysis check locally on his laptop, he saw useful debugging output when the test failed. For example, an extraneous newline would accurately be reported by Rubocop. However, when the same test ran in GitLab's automated test infrastructure, the test failed quietly:

Notice how the job log did not include any clues after the bin/rake lint:all step. This made it difficult to determine whether a real problem existed, or whether this was just a flaky test.

Was something wrong with the test itself?

In the past, we had seen that if that specific test generated enough errors, the output buffer would fill up, and the continuous integration (CI) job would lock indefinitely. We thought we had fixed that issue months ago. Upon further review, that fix seemed to eliminate any chance of a thread deadlock.

Did we have to flush the buffer? No, because the Linux kernel will do that for an exiting process already.

Was there a change in how CI logs were handled?

When a test runs in GitLab CI, the GitLab Runner launches a Docker container that runs commands specified by a .gitlab-ci.yml inside the project repository. As the job runs, the runner streams the output to the GitLab API via PATCH requests. The GitLab backend saves this data into a file. The following sequence diagram shows how this works: 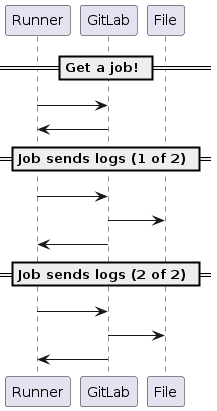 Henrich Lee Yu mentioned that we had recently disabled a feature flag that changed how GitLab handled CI job logs. The timing seemed to line up.

This feature, called live CI traces, eliminates the need for a shared POSIX filesystem (e.g. NFS) when saving job logs to disk by:

When this flag is enabled, the flow of CI job logs looks something like the following: 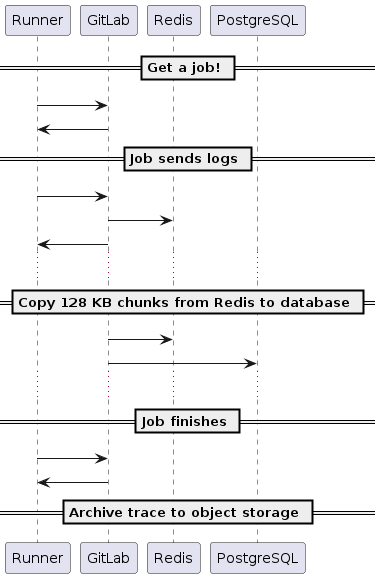 Looking at the flow diagram above, we see that this approach has more steps. After receiving data from the runner, something could have gone wrong with handling a chunk of data. However, we still had many questions:

Reproducing the bug: Simplify the .gitlab-ci.yml

To help answer those questions, we simplified the .gitlab-ci.yml to run only the static-analysis step. We inserted a known Rubocop error, replacing a eq with eql. We first ran this test on a separate GitLab instance with a private runner. No luck there; the job showed the right output:

However, we repeated the test on our staging server and found that we reproduced the original problem. In addition, the live CI trace feature flag had been activated on staging. Since the problem occurred with and without the feature, we could eliminate that feature as a possible cause.

Perhaps something with the GitLab server environment caused a problem. For example, could the load balancers be rate-limiting the runners? As an experiment, we pointed a private runner at the staging server and re-ran the test. This time, it succeeded: the output was shown. That seemed to suggest that the problem had more to do with the runner than with the server.

What does Docker Machine do exactly? The following diagram may help illustrate:

The top-left shows a local Docker instance. When you run Docker from the command-line interface (e.g. docker attach my-container), the program just makes REST calls to the Docker Engine API.

The rest of the diagram shows how Docker Machine fits into the picture. Docker Machine is an entirely separate program. The GitLab Runner shells out to docker-machine to create and destroy virtual machines using cloud-specific (e.g. Amazon, Google, etc.) drivers. Once a machine is running, the runner then uses the Docker Engine API to run, watch, and stop containers.

Note that this API is used securely over an HTTPS connection. This is an important difference between the Docker Machine executor and Docker executor: the former needs to communicate across the network, while the latter can either use a local TCP socket or UNIX domain socket.

We've known for a while that Google Cloud has a 10-minute idle timeout, which has caused issues in the past:

Note that idle connections are tracked for a maximum of 10 minutes, after which their traffic is subject to firewall rules, including the implied deny ingress rule. If your instance initiates or accepts long-lived connections with an external host, you should adjust TCP keep-alive settings on your Compute Engine instances to less than 600 seconds to ensure that connections are refreshed before the timeout occurs.

Was the problem caused by this timeout? With the Docker Machine executor, we found that we could reproduce the problem with a simple .gitlab-ci.yml:

This would reproduce the failure, where we would never see the Hello world! output. Changing the sleep 601 to sleep 599 would make the problem go away. Hurrah! All we have to do is tweak the system TCP keepalives, right? Google provided these sensible settings:

However, enabling these kernel-level settings didn't solve the problem. Were keepalives even being sent? Or was there some other issue? We turned our attention to network traces.

In order to understand what was happening, we needed to be able to monitor the network communication between the runner and the Docker container. But how exactly does the GitLab Runner stream data from a Docker container to the GitLab server? The following diagram illustrates the flow: 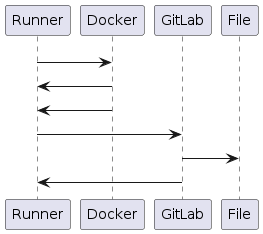 However, as mentioned earlier, traffic between a GitLab Runner and the remote Docker machine is encrypted over HTTPS on port 2376. Was there an easy way to disable HTTPS? Searching through the code of Docker Machine, we found that it did not appear to be supported out of the box.

Since we couldn't disable HTTPS, we had two ways to eavesdrop:

Ok, let's be the man-in-the-middle!

The first seemed more straightforward, since we already had experience doing this with the Docker client.

However, after defining the proxy variables for GitLab Runner, we found we were only able to intercept the GitLab API calls with mitmproxy. The Docker API calls still went directly to the remote host. Something wasn't obeying the proxy configuration, but we didn't investigate further. We tried the second approach.

To decrypt TLS data, we would need to obtain the encryption keys. Where were these located for a newly-created system with docker-machine? It turns out docker-machine worked in the following way:

As long as the machine runs, the directory will contain the information needed to decode this traffic. We ran tcpdump and saved the private keys.

Our first attempt at decoding the traffic failed. Wireshark could not decode the encrypted traffic, although general TCP traffic could still be seen. Researching more, we found out why: if the encrypted traffic used a Diffie-Hellman key exchange, having the private keys would not suffice! This is by design, a property called perfect forward secrecy.

To get around that limitation, we modified the GitLab Runner to disable cipher suites that used the Diffie-Hellman key exchange:

In rebuilding the runner, we accidentally compiled the GitLab Runner with a current version of the Go compiler, and this proved to be serendipitous. The Wireshark screenshot below was taken with a test run with the official GitLab Runner v12.4.1 that was built with Go v1.10.8. Notice there is a 12-minute gap (due to a sleep 700) with no keepalives, and then we see a TCP RST from the remote Docker machine:

Since no keepalives were present, the Google 10-minute timeout closed the connection and prevented the runner from receiving any more data.

The next screenshot is a test with the same runner version with Go v1.12.6. Notice all the 15-second TCP keepalives highlighted in red during the idle time: 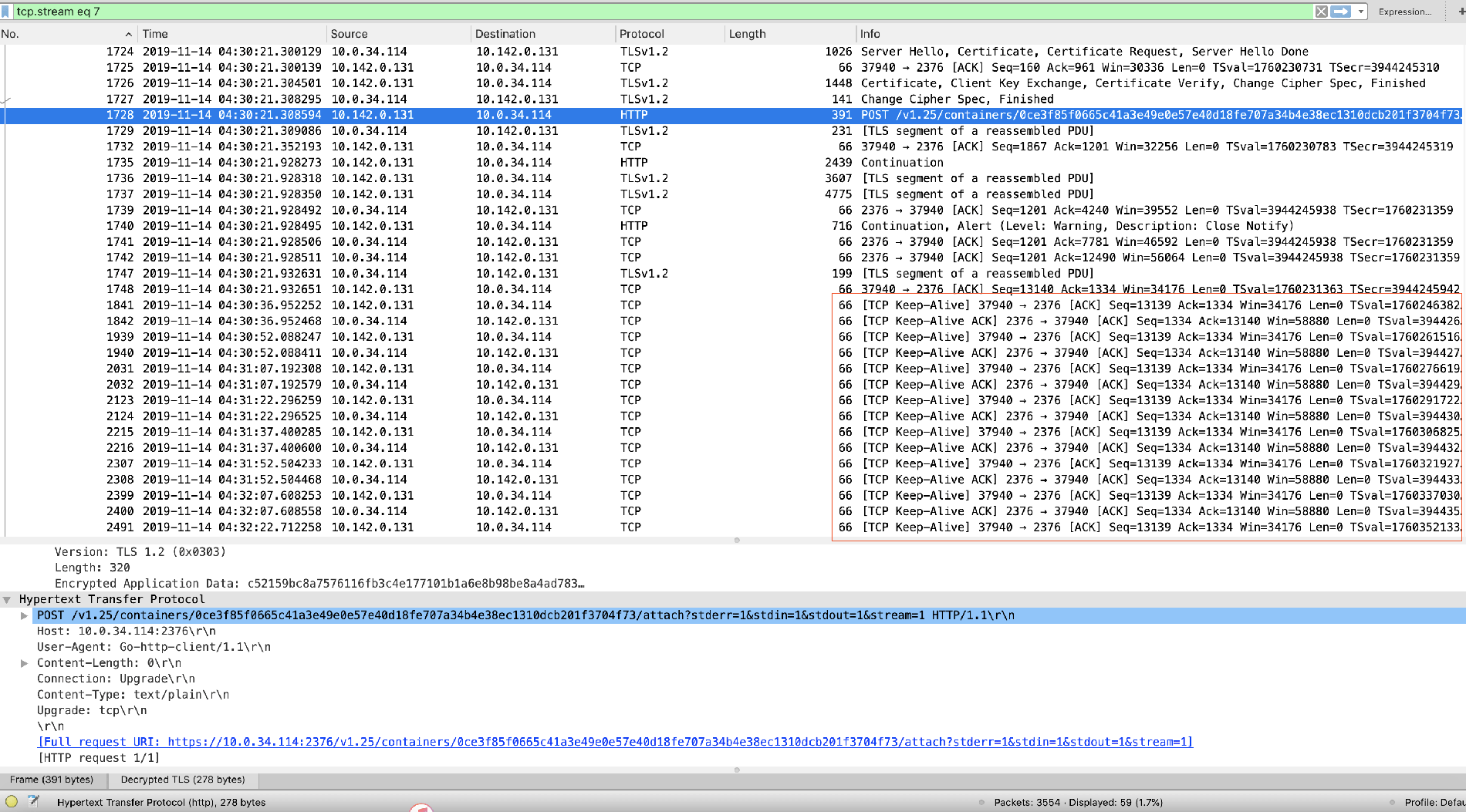 Eureka! As it turns out, Go v1.12 enabled 15-seconds by default via this commit. Using this updated version solved the problem! Older versions of Go did not enable keepalives, nor did they obey the system kernel setting.

But didn't the Docker client attempt to set a 30-second TCP keepalive? As it turns out, this doesn't work when the connection uses TLS. In the code that listens to the container, the keepalive is only set if the connection is net.TCPConn. However, with a remote Docker machine, the connection is of type tls.Conn. As mentioned in Reddit, tls.Conn doesn't provide keepalive settings since the underlying connection doesn't have to be TCP.

In short, Go v1.12+ masks a bug in the Docker client library. The client library should be enabling a TCP keepalive every 30 seconds. However, it skips that step when a TLS connection is used, but newer versions of the Go compiler will enable keepalives once every 15 seconds.

We worked around the problem by compiling the GitLab Runner with Go v1.12.13, and this enables a 15-second keepalive by default. We were surprised that Go doesn't use the kernel settings to turn on TCP keepalives, but this may be done for cross-platform compatibility reasons.

We never expected that a simple static analysis failure would lead us down this rabbit hole, but the debugging techniques described here will invariably prove useful in the future. At the very least, this journey illuminated how Go, Docker, and GitLab work together.

DISCLAIMER: This blog is intended for user-generated content submitted by the GitLab team. The views and opinions represented in this blog are personal to the author of each respective blog post and do not represent the views or opinions of GitLab unless explicitly stated. All content provided on this blog is for informational purposes only. Neither GitLab nor any of the individual blog contributors ("Contributors") make any representations as to the accuracy or completeness of any information on this site. Neither GitLab nor any Contributors will be liable for any errors or omissions in this information or any losses, injuries, or damages from the display or use of this information. Comments are welcome, and in fact, encouraged. However, GitLab reserves the right to edit or delete any comments submitted to this blog without notice should GitLab determine them to i) be spam or questionable spam; ii) include profanity; iii) include language or concepts that could be deemed offensive, hate speech, credible threats, or direct attacks on an individual or group; or iv) are in any other way a violation of GitLab's Website Terms of Use. GitLab is not responsible for the content in comments. This policy is subject to change at any time.